Odyssey looks to be a leap too far. 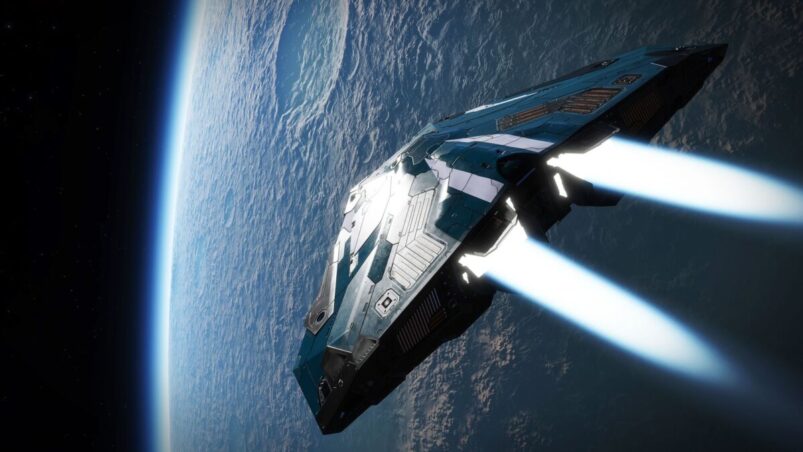 It’s no secret that I’m a big fan of Elite Dangerous. I have over 300 hours clocked on the space flight simulation experience, and have enjoyed myself even though I generally spend my hours pottering around the universe. Back in 2015, Elite creator David Braben announced that Elite Dangerous would have a 10 year development plan, which has added a number of paid DLC and numerous free updates to the game since.

Elite Dangerous had previously seen the Horizons update, which added landable planets, planet bases and vehicles to explore those planets. May 2021 saw a new update for Elite Dangerous, in the form of Odyssey. The game’s most significant update yet, Odyssey was particularly exciting for Elite players, as it added the ability to get out of the pilot’s seat and explore, even including exploreable bases, physical NPCs and FPS combat.

However, Elite Dangerous’ latest DLC wasn’t without problems. Odyssey began to receive negative reviews, and even today the update holds a rating of ‘mostly negative’ on Steam. Despite the rating, when Odyssey went on sale I picked up the game and hoped that many of the initial issues had been ironed out after half a year on sale.

Some of these negative reviews took issue with the standard of the FPS action, with one player stating the following:

“What Odyssey demonstrates so well, is how a Space Flight SIM developer should never touch FPS mechanics. The combat is janky, but tolerable; though the never-ending waves of enemies that just keep showing up in random dropships is unbelievably frustrating.”

While I personally don’t mind the FPS combat in Elite Dangerous, I do agree with the review to an extent, in that the FPS action certainly isn’t on par with other FPS games. But then again, I never expected it to be. First and foremost, Elite is indeed a space flight sim, with FPS tacked on — it is serviceable, and a decent enough experience. It’s not going to blow anyone’s mind, but it doesn’t need to — it just needs to add a different element to the Elite formula.

(Side note, it reminded me a little of early 00s FPS Chrome, and I’m not sure why.)

While I’m happy with the FPS experience, not all of Odyssey is up to snuff. During the years of playing Elite Dangerous, I’ve found it to be a technically stable game, but whatever they had to do to get first person running on Elite seems to have ruined that experience. I have probably had Elite Dangerous crash on me perhaps twice in five years, yet Odyssey crashed three times within the first two days of playing.

And it only went downhill from there. Frequent crashes and occasional (immersion breaking) bugs plagues my time with Odyssey, as I find myself being thrown back to the desktop time and time again. The always online game would also lose connection too, or randomly become unable to connect to Elite’s servers, only to then connect two or three tries later. This could be due to an increase of players during the Christmas period, however due to the other issues at play here I feel this may well be the unstable update.

The bugs, while not as frequent, are incredibly annoying. During one session I found that a random piece of debris had become lodged in the entrance to a space station, leaving me to abandon my docking as I watched a computer controlled pilot repeatedly reverse and smash into the debris in hopes of passing by it.

But the most annoying of bugs came only last night, as I was flying my super expensive cargo ship loaded with cargo and attempted to leave the space station. When passing through the station gate, the game froze, and I was unable to tab out of the game. Then around 30 seconds later, the game ‘woke up,’ but my ship was now on fire and exploded, losing me a total of around 9,000,000 credits. I thought this could be an issue on my end, and I had perhaps interrupted the automatic launching process somehow.

I respawned and tried again. Foolish of me really, as I found that I encountered the same issue, once again losing me yet another 9 million. This isn’t a small amount of money in-game, either: 18 million could foreseeably take players many hours of gameplay to earn back.

Elite Dangerous is still probably the best space flight sim experience available today; if you’re looking for something immersive and deep, then it’s probably your best choice. However, Odyssey feels like an early access release, and considering that this is a piece of DLC costing £29.99 ($39.99), it’s really not good enough.

READ NEXT: 10 Best Life Sim Games You Should Play