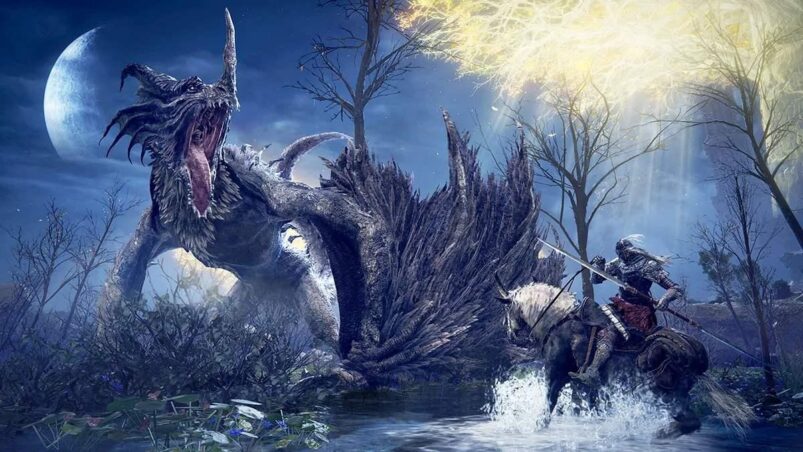 Note: this article was written before the datamine leak on the DLC and with no knowledge of what the leak contains. This article contains spoilers for the main story of Elden Ring but does not include any information released in the leak.

We’re fast approaching reveal season for some Elden Ring DLC. Traditionally, FromSoftware has released DLC for the Souls series less than a year after each game’s launch, and the start of November means it’s nearing the 9 month mark since Elden Ring was released.

The Lands Between are absolutely stuffed with content, but like any good FromSoft game, even multiple playthroughs of the story leave more questions than answers. And this begs the question: with so much material to choose from, what direction will they go with DLC?

Given the past habits of FromSoft DLC and conclusions that have been drawn from Elden Ring’s lore so far, let’s take a look at 5 things we could expect from Elden Ring DLC.

Miquella ended up being one of the biggest twists in Elden Ring. He’s a mystery for the entirety of the game—twin brother of Malenia and bearer of a Great Rune, he’s framed as a potent figure that the player will eventually have to confront.

But for intrepid Tarnished who find the domain of Mohg deep underground in the Siofra River, they’ll discover Miquella slumbering in a cocoon on an altar in the Mohgwyn Palace. This discovery, paired with conversations and item descriptions throughout the game, reveals that Miquella was sleeping in an effort to undo his curse of eternal youth, growing alongside his Haligtree before Mogh abducted him.

There’s a lot of lore around Miquella, and much of it resides in cut content. We know that Miquella and St. Trina are one and the same, and that a whole sidequest around gathering the dreams of NPCs was ultimately scrapped.

DLC would be a perfect chance to delve into Miquella’s story. We could plunge into a world of his dreams, exploring an ethereal realm while being totally at the mercy of an Empyrean’s whims. We could even see him awaken and become a force to be reckoned with, like we expected out of the main story. It would also be interesting to see an interaction with him that changes based on if the player has conquered the Haligtree and defeated Malenia.

The truth of Marika and Radagon’s dual nature is one of the most obtuse bits of lore in the game, but what we do know of both characters shows them to be powerful, deeply flawed, and complex beings who certainly deserve more time on center stage.

Each half of the entity has their own backstory, motivations, and influence on the Lands Between, but how and when they appear and switch is unclear as of yet. They’re both interacting and swapping constantly in the distant past, and it’s ironic that Radagon only gets the limelight to himself after Marika shatters the Elden Ring and is imprisoned by the Greater Will. Because of their dual nature, Radagon is stuck sharing her sentence as well.

No fewer than six major adversaries in the game are begotten by one (or both) of them. The most curious of those is the twins Miquella and Malenia, who came from Radagon and Marika’s union and bear their respective curses as a result. These curses are central to Miquella’s motivations in the story, and it also thickens the mystery of his parents’ nature.

Exposing the secrets of the Marika/Radagon dynamic would be a great option for DLC, going back in time to the events around the Shattering and setting the stage for the adventure that players eventually come to know.

3. War between Caria and Leyendell

Going even further back than the Shattering, we could get a firsthand look into the clash between Carian forces and the armies of Leyendell, uncovering more details between Radagon and Rennala’s relationship and Radagon’s eventual departure.

As is the case in Soulsborne games, we always enter the story long after the great conflicts of history have shaken out and kingdoms have fallen into disarray. It would be quite a sight to see Raya Lucaria and Leyendell in their prime, led by Rennala and Radagon in their full strength. It was also a time when sorcery was at its peak in the Lands Between, Glinstone sorcery in particular, and we could see the origins of some side characters like the Primal Sorcerers, Sellen, and Jerren.

The war and resolution between these two factions birthed Ranni, Rykard, and Radahn, all of whom are major players in the Lands Between and feature prominently in the Tarnished’s adventure.

Another intriguing destination could be the Badlands where Godfrey, the first Elden Lord and prior consort of Marika, spent his exile before returning to The Lands Between. It’s implied to be a conflict-ridden territory, where Godfrey’s ferocious strength carried him to the position of chieftain under his original name, Horah Loux.

Conditions don’t seem to change much over the course of time in the Badlands; Nepheli Loux shares in her backstory that her homeland was “a waking nightmare, made by men,” full of death and violence. Though she was rescued at some point and adopted by Gideon Ofnir, the tragedies of her birth land had a profound effect on her even into her adult years.

Having the Tarnished visit the Badlands could provide more backstory for Nepheli as well as Godfrey, and help to uncover the environment that turned them into such hardy, albeit troubled, warriors. Players could bring peace to a territory of longtime strife, or they could be the firsthand witness to a land that finally buries itself with its brutality.

5. Ranni and the Stars

A prime candidate for a new area would be the moon or a distant star, following Ranni’s ascension into the beyond. One of the game’s possible endings is the Age of Stars, where the Tarnished aids Ranni in breaking loose of her Two Fingers and granting a future free of the Greater Will’s controlling influence. While this ending doesn’t expressly introduce any more conflict, there are plenty of cosmic forces who would gladly challenge the Lunar Princess for her territory.

Ranni’s quest for freedom is by far the longest side journey the Tarnished can embark on, and given the convoluted nature of quests in FromSoft games, it’s easy to miss steps or foul up the progression, locking yourself out of the ending. It’s an introduction to some of the most interesting NPCs in the game, and the winding path takes you across Caria, Caelid, down through deep underground ruins of the Eternal Cities, and lastly to the hidden Moonlight Altar.

The Lunar Princess is a central figure to the Lands Between, tied to quite nearly every major faction by either familial relations or by her various plots. She’s a figure full of contradictions, equally as kind to her retainers as she is ruthless to those who stand against her. Traveling to the stars would be an awesome backdrop for a new, and very strange, area, and it could draw Ranni out to center stage in her full power.

Whatever it ends up being, Elden Ring’s DLC is sure to be chock full of new weapons, enemies, NPCs, and more cleverly teased bits of story and connection for the complex Lands Between. If I were a betting Tarnished, I’d stake my runes on a firm DLC announcement before the end of the year. Wherever it takes us, we’ll all go there maidenless together.