Dying Light 2: How To Change Difficulty 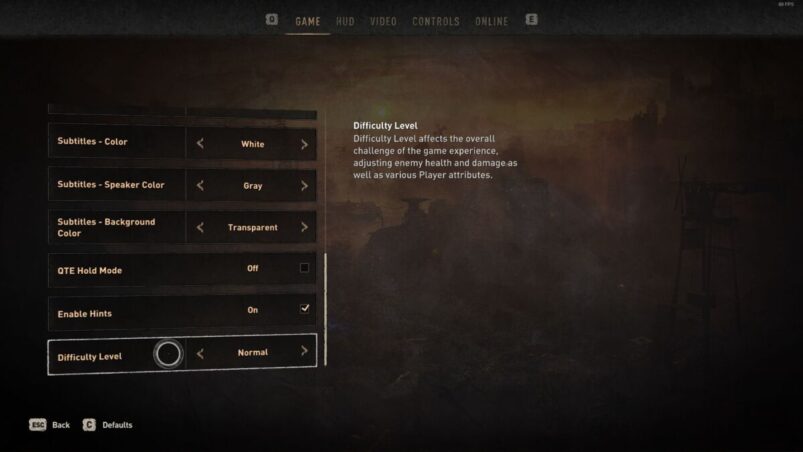 Dying Light 2 is about as challenging as a game where it’s you versus an endless horde of zombies could be, but there is a way of changing the difficulty if you want a different kind of challenge.

To change difficulty in Dying Light 2 at any time, go to your pause menu > Options > Game, then scroll all the way down to the bottom and change the difficulty to easy, normal, or hard.

Here’s a breakdown of each difficulty:

Easy
An experience adapted for those who are most interested in enjoying the story. Enemies are relatively easy to beat and you receive less damage. Resources are more easily available.

Normal
A balanced experience for the majority of gamers. Enemies pose a reasonable threat at the start, which increases as the game progresses. Resources are evenly distributed in the world but will still require some effort to find.

Hard
A more challenging experience created with Dying Light verterans in mind. Enemies are a serious threat from the start, dealing more damage and adapting to player tactics with greater efficiency. Resource management is key as merchants offer fewer craft parts and it’s harder to find rare items during exploration.

We played through the game on normal and found it challenging, though not nearly as much as the first game. We only ever really died from fall damage and only a few times in combat. Those returning to the series from Dying Light 1 may want to try out Dying Light 2’s hard difficulty, as it will likely be closer to the survival-lite experience some prefer.