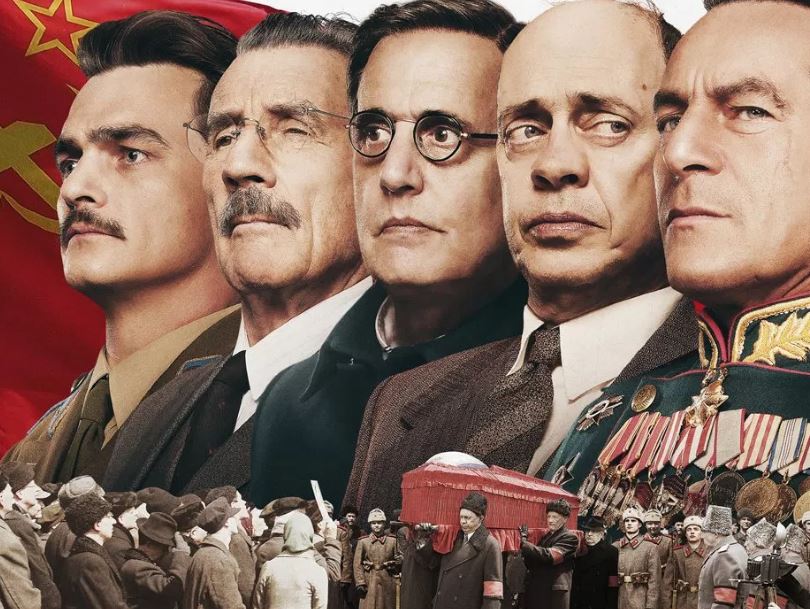 Two types of people are going to see The Death of Stalin. Some of them will be expecting a kind of political biopic; a poe-faced social drama about the maelstrom of Machiavellian politics that defined the period after Stalin’s 1953 death. Others are going to familiar with director Armando Iannucci’s work.They’ll be expecting something very different. The creative cussing, the biting satire of The Thick of It. The Death of Stalin seems keenly aware of this, of exactly who’s stepping into the cinema and exactly what they expect, of the particular, dreary connotations its sombre title card presents. But it seems to try to live up to both. This isn’t a bad film, by any means. Iannucci’s writing is as sharp and as biting as ever, but it’s definitely a confused one.

It follows, as you might expect, the central committee of the USSR as they scramble for power in the wake of Stalin’s death. Throughout the bickering and the scheming, three central figures come to the fore; the chinless Malenkov, former Secretary of the Central Committee (Jeffrey Tambor), rises up to succeed Stalin. He never seems to know quite what he’s doing or quite how to do it. At the same time, Nikita Khrushchev (Steve Buscemi) squares off with the conniving head of the NKVD Lavrentiy Beria (Simon Russell Beale) for power within the Central Committee. Everyone else, though brilliantly acted and well written, falls by the narrative wayside; a list of names that are hard to remember and sub-plots that are sometimes difficult to trace.

The film is at its best in the first half, when Stalin’s illness is established but his death isn’t. The comedy here is thick, fast and unexpected. It’s bathos with a masterful edge. The central committee are played less like soulless communist bureaucrats and more like gangland mob bosses- Stalin himself oozes through the screen like someone’s cockney grandad, a Kray Twin with a palace and the right to legislate- if it’s not Dermont Crowley’s exaggerated cockney, it’s Steve Buscemi’s attempt at cigar-swigging Americana. The shift is different, and it takes a moment to get used to, but it works. There’s an energy here, and it lends itself well to the committee’s farcical, first-half bumbling. There’s a knowing contrast, too; the flat colour palette, the self-serious shots, the communist mise en scene; row after row of identikit red army soldiers, cerebral executions, bare-fisted, government-endorsed beatings in dimly-lit rooms, all played off against a circus of politicians struggling to move Stalin’s body from his office to his bedroom without touching the piss in his clothes.

It’s brilliant. The first half of this film knows what it wants to do, where it wants to go and exactly how to draw you in. Whether you know Iannucci or not, it’s hard not to buy into its fiction, to accept its status as a biopic, and then to revel in the bathos as Iannucci winks and rips the rug from under your feet. This film sells its deceit so well, and with such conviction that its comedy can’t help but work.

It only stops working during the second half, as Stalin’s death is confirmed (like we all know it will be) and the plotting begins. If the first half was the Three Stooges with gritty sensibilities and a Soviet Mise En Scene, then the film of the second half is exactly the kind of political drama its title card suggests; a maelstrom of plots and subplots, narrative daisy-chains which blossom out into major revelations; double-crossings on double crossings on triple crossings; mental breakdowns, gathering evidence and twisted truths. It’s good stuff. That you’re able to follow it despite the names is testament to Iannucci’s writing chops and story-telling talent, nor do we lose the jokes. Stalin’s son, played by Rupert Friend, is a constant drunken riot and Iannucci never loses his flair for creative swearing. It doesn’t work, though. At least not like it should.

It doesn’t work because it’s asking us to buy into a fiction, an image of the film, that the film itself has dismantled; where the slapstick of the first half cuts through the poe-faced cinematography, the military mise-en-scene and draws it into the wider tapestry of a joke, this second half asks us to take the film seriously again. The result isn’t bad, as such, just strange, disorientating. The jokes are still funny, but now they feel almost obligatory, like holdovers from some other film. You can’t help but feel everything’s been turned on its head. It’s not even that comedy and drama can’t intertwine; where a lot of films (see anything pumped out by Marvel) keep comedy and narrative in two separate boxes, only drawing on one when the other gets stale, The Death of Stalin is trying, pretty admirably, to mix the two. It’s just that we’ve been asked to accept a satire and then, an hour or so later, to accept that the satire has become self-serious without ever really ceasing to be satire. It’s confusing, and it sacrifices the hard-edge the genre demands.

Nonetheless, though, you should watch The Death of Stalin. It’s doing an awful lot right. It’s well-shot, well-acted and brilliantly written. Confused though it might be, it’s a winning, wittily endearing stand against self-serious biopics and a brazen attempt to try something new. That should be applauded, no matter what.