Home
Gaming
10 Years Later, Dead Rising 2: Off The Record Is The Series At Its Best
Gaming
·3 min read

10 Years Later, Dead Rising 2: Off The Record Is The Series At Its Best

"Frank West is back in the game." 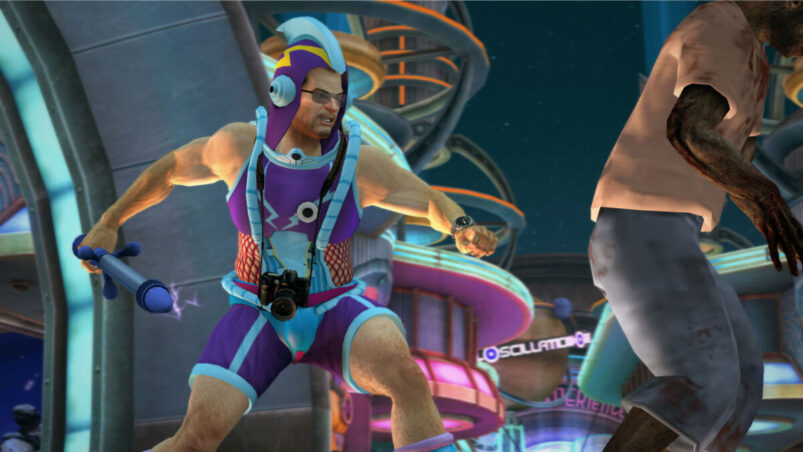 Celebrating its tenth anniversary today, Dead Rising 2: Off The Record feels like the zombie killing series at the absolute top of its game. Some will say that Dead Rising 1 is the real pick for best game, which is understandable, but there’s so many idiosyncrasies in that game that have made it harder to love with age. I still love it, and going back to it recently was still an absolute joy (remembering where all the secret PP rewards were felt like the gaming equivalent of that guy who always wins your local pub quiz), but Dead Rising 2: OTR just hits different.

Part of the reason for that is that Dead Rising 2 is, in a lot of ways, a much better game than the original. Fortune City’s mix of malls and casinos, a city exemplified by its excess and greed, feels like a more interesting area to explore than Willamette Parkview Mall. The vibrant graphics also add a bit more colour to the screen than the splashes of blood when caving a zombie’s skull in.

On top of that all that, Dead Rising 2 introduced a few quality of life changes that make the core experience more rewarding to play than the original game. Just being able to tell when survivors you’re rescuing will actually travel with you through loading zones saves so much frustration that the first game caused. The ability to combine weapons also added a flair of inventiveness to the game, as you’d throw two random objects together with the hope of creating a new, death-dealing masterpiece, while limiting that ability to specific workbenches around Fortune City to ensure you’re never too overpowered and the zombies retain some bite. Throw in some online co-op for additional fun, and Dead Rising 2 rightly sits as one of the best in the series.

Dead Rising 2: Off The Record takes all of that, and has a bit more fun with it. A non-canon retelling of the events of DR2, Off The Record replaces protagonist Chuck Greene with Dead Rising 1’s Frank West, giving long-time fans another chance to step back into the shoes of everyone’s favourite photojournalist. Chuck’s a great guy and all, but playing as Frank once again adds that much more fun to the proceedings.

Honestly, the decision to make Off The Record non-canon felt like the developers could just let loose a bit more. The plot is a semi-serious remix of the original game’s story, complete with altered events, characters and motivations, which was enough to catch hardened DR2 vets off-guard back in the day. Off The Record managed to provide an alternative experience, wrapped up in a game that had already won players over.

Seeing Frank return also meant the return of his trusty camera, meaning players could capture a lot of the undead calamity for themselves. Off The Record uses photography in some key moments to capture plot points, but also allows players to earn more PP for taking ridiculous photos or by finding PP markers out in Fortune City, allowing players to interact with the play space in another way entirely.

Off The Record’s version of Fortune City even comes with a new area, the lovingly named Uranus Park, also provided plenty of opportunities for ridiculousness, with the massive rides allowing the player to flatten hordes of zombies in one fell swoop. Some of the best areas in Dead Rising champion platforming to find juicy secrets and powerful weapons, and Uranus Park has so many individual areas and hidden goodies to discover that you’d be wandering around for hours.

Fortunately, you’d even have the time to explore with the Sandbox mode, which allows players to spend as much time as they like immersed in Fortune City, completing challenges and discovering secrets and shortcuts to ultimately level up and make the actual story mode much easier. Forcing Dead Rising to become a normal open world with no time-limit seems wrong, but adding that mode as an extra option is great.

While the quality of Dead Rising might have dropped off after the release of Off The Record, it still stands as the series’ high watermark, celebrating the history of the series while promoting gameplay discovery over grand spectacle. It’s been 10 years since its release, but it’s still an incredible game worthy of your time.

READ MORE:  Why Dead Rising is the Scariest Video Game I’ve Ever Played