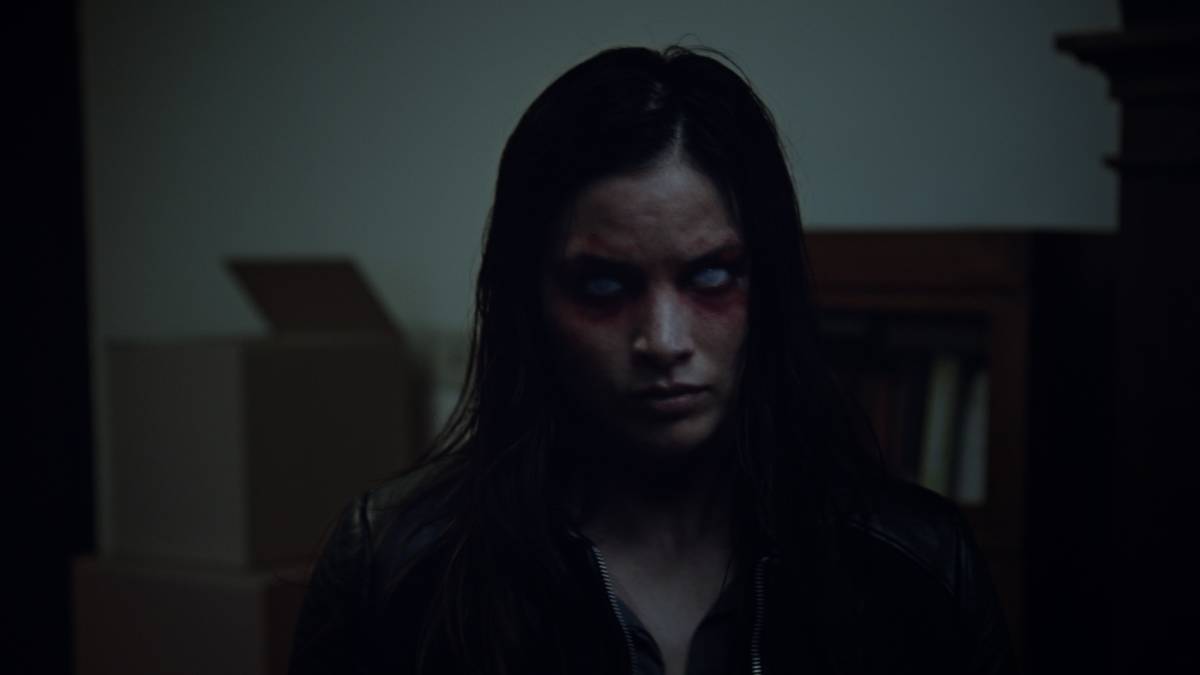 Darkness Rising is a pretty mediocre horror flick written by Vikram Weet and directed by Austin Reading. It has a few interesting surprises, but not enough to really keep the viewer captivated, even within its sparse 80-minute runtime. Which is too bad, because when the gimmick of this next in a long line of haunted house movies is revealed, it’s actually quite interesting.

We start with a group of teenagers — wait, they’re not teenagers. They’re actually in their late 20’s. But their dialogue is written for teenagers. And people in their twenties play teenagers all the time, so it’s it’s okay if you get confused at first.

This group of three definitely-not-teenagers gather outside a house that’s been closed off for twenty-five years (?). It’s the house where Madison (Tara Holt) spent part of her early childhood. Something terrible involving her mother going absolutely mad and killing some people happened there twenty-five years ago. I don’t know why it took so long, but the building is finally about to be demolished. Okay. Well, then. Madison is accompanied by her boyfriend Jake (Bryce Johnson) and her cousin Izzy (Katrina Law). These characters’ dialogue as they stood outside the house honestly had me wondering if we were in a late-90’s teen horror movie. It was a little disconcerting to learn that they were supposed to be older. And educated. Hell, Jake was supposed to have his master’s degree. Anyway, it doesn’t matter. As characters, they’re generic placeholders.

It’s never explained satisfactorily why Madison wants to return to the house where murders took place and she was traumatized as a young child. She just seems way too casual about the whole thing. I get that it was a long time ago, but it’s hard to see how she can get into a frisky mood and make out with her boyfriend in her old bed. That must make for quite the weird mix of emotions and memory. Ah, but this movie doesn’t make any sense. This can be a good thing, but the movie is quite predictable, too. Jump scares, which I don’t really like anyway, just aren’t scary when you know exactly what’s coming. Madison’s looking under the bed? Well, gee, wonder what’s going to happen. Darkness Rising doesn’t take itself seriously enough to be scary, but it’s not weirdo schlock, either.

Then there’s something or other going on with the number five, which keeps popping up in conversations and such, and the whole thing is supposed to create a mystery, which it does, but the movie isn’t interesting enough to make a mystery at all compelling. And the movie has a weird list of rules that the demons follow. This happens a lot in horror movies as a means of justifying certain limits placed on the other-worldly characters. But in this case, it all seems put together with a shrug and tossed out in order to help advance the plot and give a concrete reason for the weirdness. But in cases like this, less is going to be more. Quite.

There are some cool things scattered here and there that I really liked. There’s a demon dog that exists on all sides of the house simultaneously, blocking all of the exists. I’m a sucker for a demon dog. I usually root for them to win. So points for that. There were some other pretty cool incongruities, but they were sparse, and scattered about an eighty-minute movie that takes thirty minutes to really kick into gear.

Shout! Factory usually puts out quality stuff, but this barebones Blu-ray release is one to avoid.