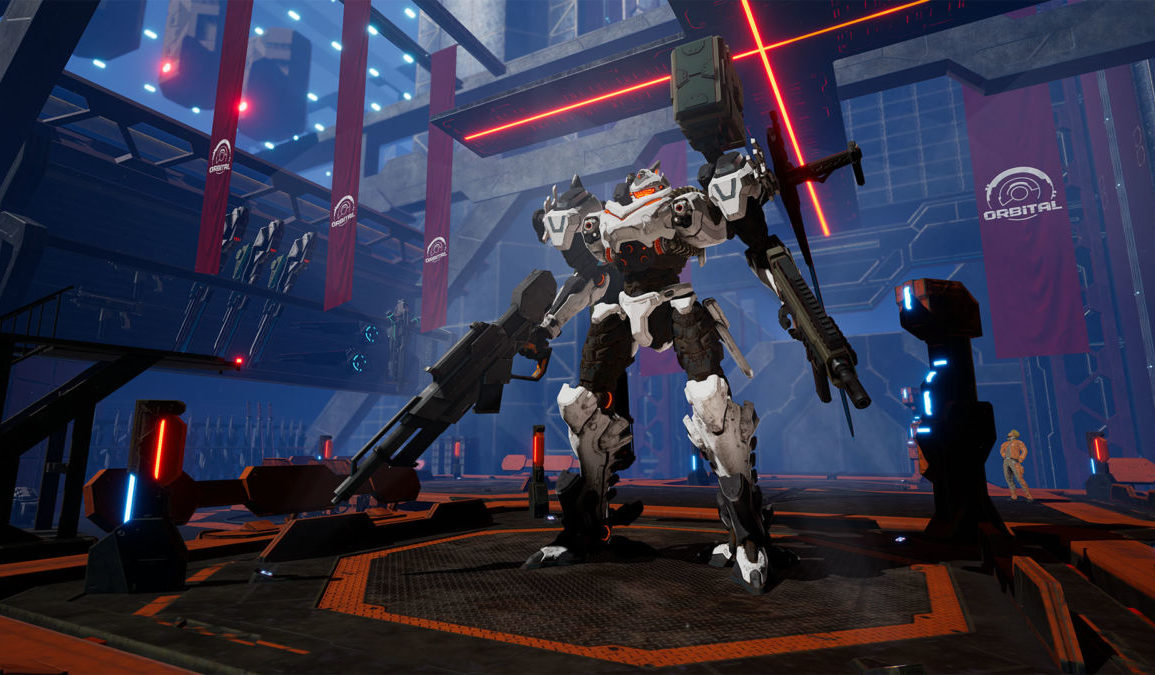 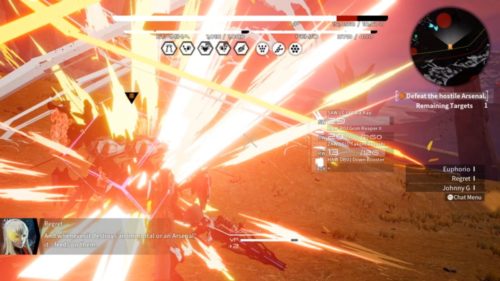 As far as fast-paced mech action games go, the field has been dominated by a relatively small number of franchises with only a handful of releases in any given console cycle. For a time, the Armored Core series would release a solid game yearly, but those days are long past, and now we’re left hoping for a great Gundam release, or perhaps some kind of indie darling to carry on the mechanized combat mantle. It’s no wonder, then, that Daemon X Machina, which is partly published through Nintendo itself, would cause some serious ripples in a genre that’s woefully underrepresented during the current generation of consoles.

However, as a full package, Daemon X Machina tends to merely check the boxes for what is required of a mech combat game, without taking any major risks in terms of gameplay or story mode. Though it may not propel the genre forward or even garner a sequel, the game can offer some great moments with its rapid combat and relatively deep customization. 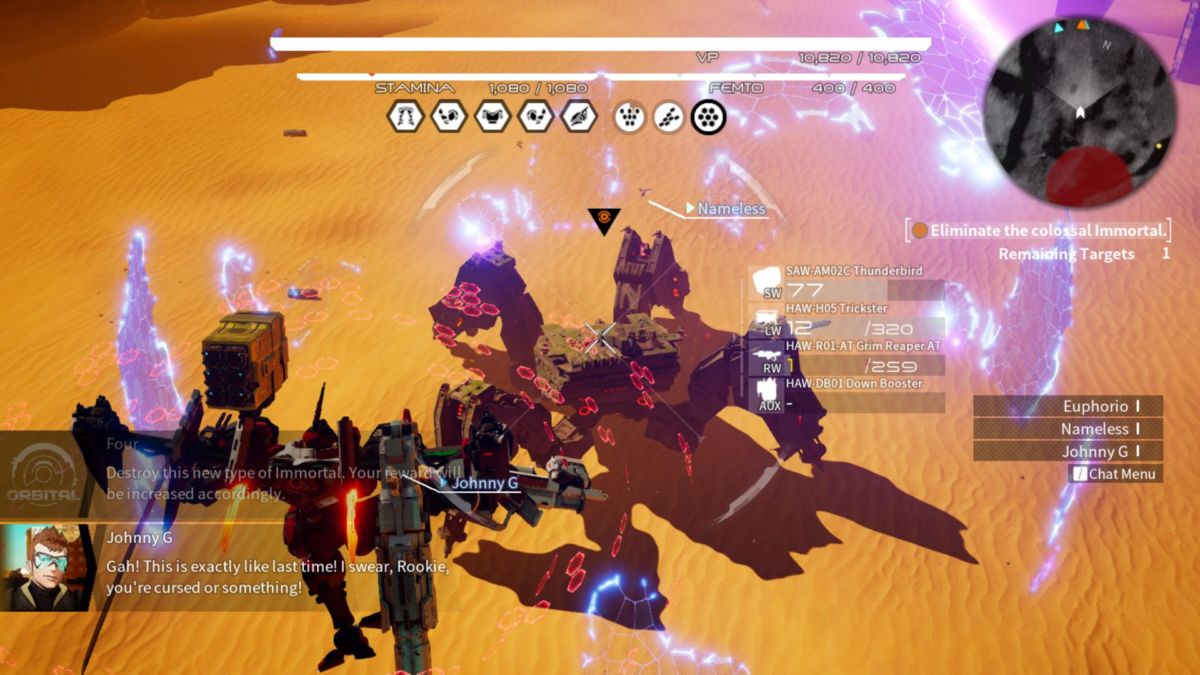 Daemon X Machina places you in the role of a new recruit for a special band of mercenaries, known as Outers. Surpassing human capabilities, these Outers, utilizing the might of giant robots called Arsenals, now serve as the strong arm of a neutral organization called Orbital that seeks to maintain control and balance among the world’s most powerful organizations, while also fending off the invasion of rogue AIs looking to destroy humanity.

Though your main goal is to fend off the AI and their brand of Arsenals, known as Immortals, the organizations generally dislike each other, forcing Orbital to intervene on a regular basis. Also, your main source of information is actually an AI known as Four, and you can probably see where this is going. There’s espionage, betrayal, mismanaged information, infighting, and plenty of deception, though it all feels a bit contrived, most conflicts lasting a mere mission before it’s water under the bridge. 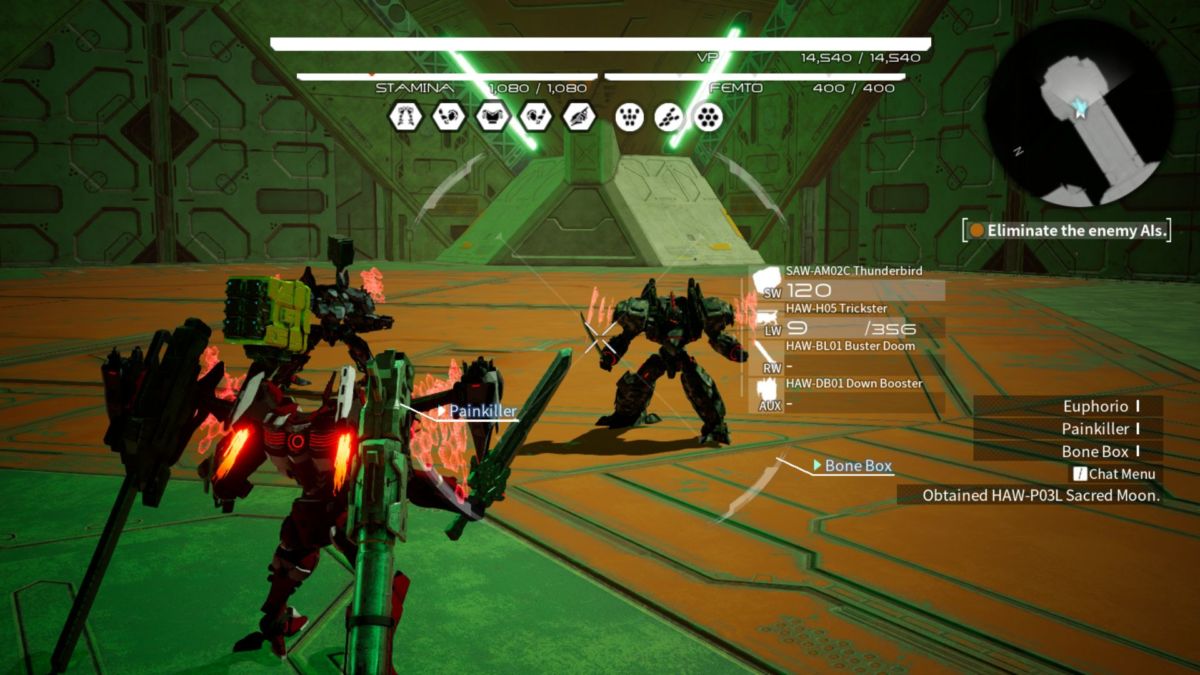 Most of the story takes place through short cutscenes prior to main missions or during a mission when all present arsenals awkwardly huddle together to discuss why one of them is being a jerk. Outside those cutscenes, the dialogue is displayed through speech bubbles presented in a similar style as text exchanges in a group chat. Though Daemon X Machina is fully voiced throughout, the story itself is underwhelming and cliche, considering Armored Core’s series also dealt heavily with the same topics.

It doesn’t take long to realize the story isn’t meant to be a huge selling point for this game, but rather a small feature to guide you along as you compile different weapons and armor pieces for your mech. Mercenary factions make up the bulk of Orbital, but you don’t even get to join any of them, staying just a neutral Outer prodigy that constantly pummels his friends in order to complete the mission. 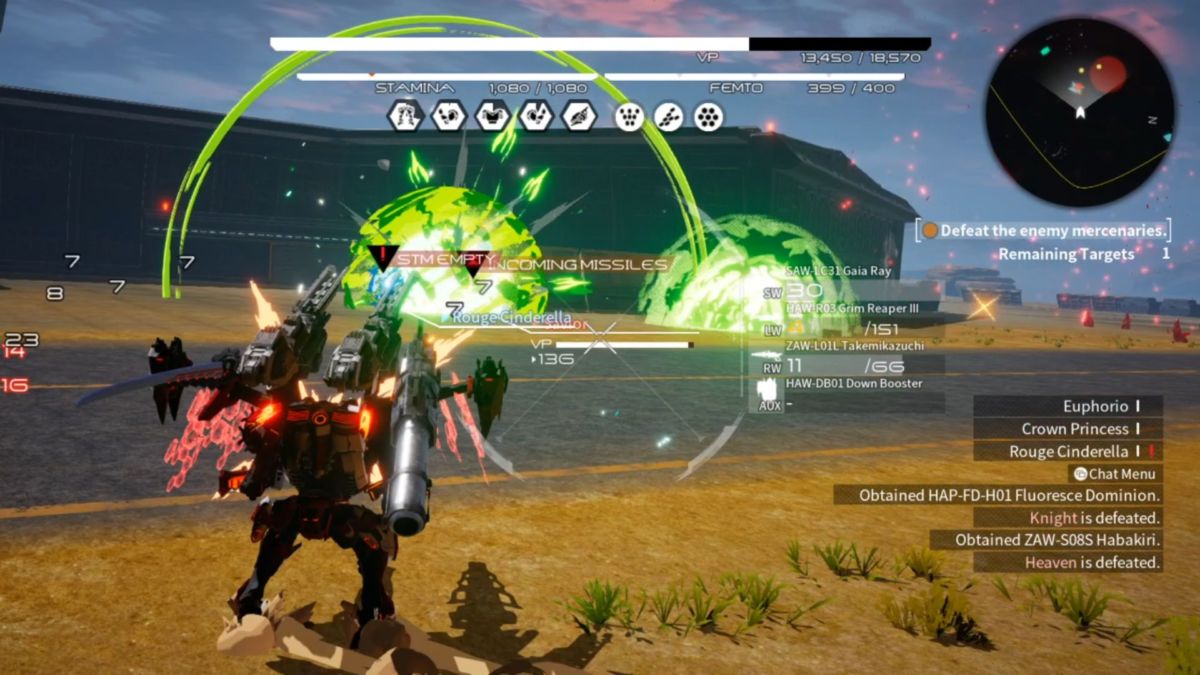 The actual combat is where Daemon X Machina finds its mechanized stride. For each mission in the campaign, players are sent into an abandoned region to either clear out the enemy machines or protect valuable assets from destruction. Most of these areas can be summarized as either “empty desert city,” or “robotic military base,” without much deviation from those setpieces.

As your own customizable mech, you take on enemy forces in rapid, booster-heavy combat, utilizing two standard weapons and one shoulder weapon, along with a couple of backup weapons you can switch out at will. Aiming isn’t much of an issue as all guns and missiles automatically target and track the nearest baddie, though some laser weapons take a bit more finesse. The guns themselves run the gamut of what’d you’d expect from futuristic combat: laser rifles, shoulder cannons, heat swords, and even arc guns make your loadout feel relatively diverse and impactful on how combat will play out. 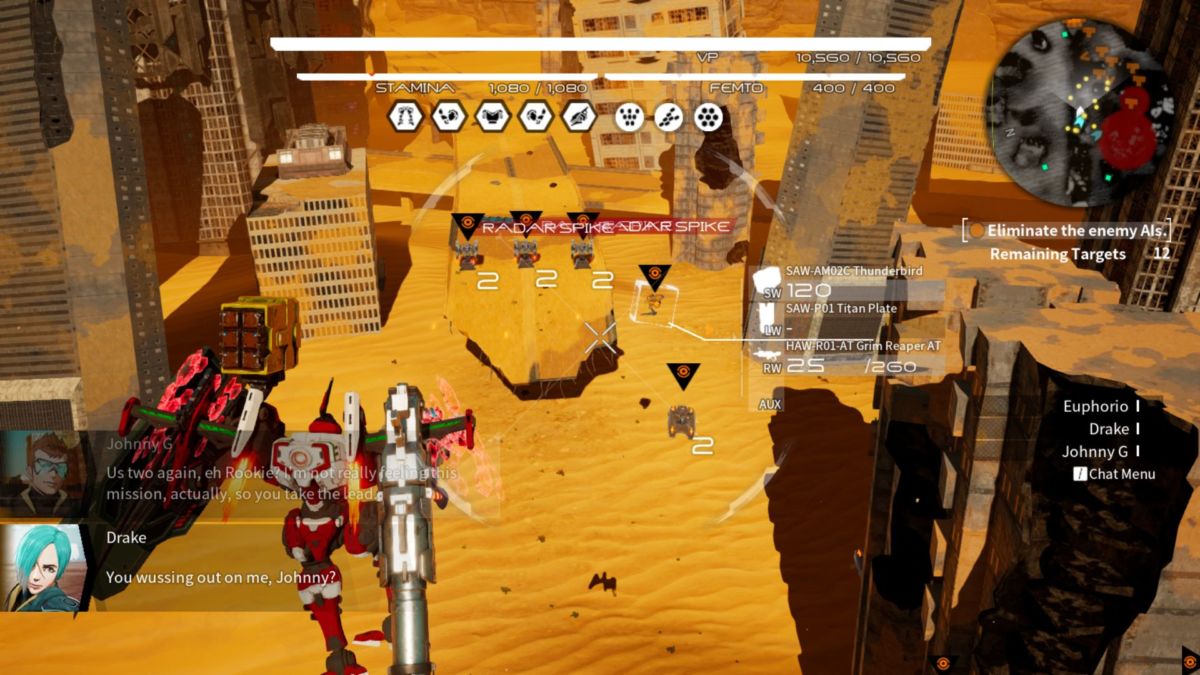 Seeing as this was originally released on the Nintendo Switch, I decided to play through using a gamepad, which handled well. The controls are relatively tight given how many actions need to be juggled at a time. I found myself employing more than just the basic pointer-thumb combo so that I could more easily manage boost, weapon swapping and my utility slot. Still, nothing was ever out of reach, and it never felt like the controller layout was hindering my gameplay. The buttons are also fully customizable for however you’d like to play, allowing multiple customized layouts at a time.

Though the general combat plays well and moves at a good pace, the HUD feels a bit overcrowded while also not giving enough information. Weapons obviously do damage, and those numbers are displayed upon hitting, though most enemies don’t actually have a health bar so it’s an arbitrary bit of information that contributes to the clutter. Even the enemies who do have a health bar don’t actually display how much health they have, so it only helps you understand how little you are doing in terms of killing, which is its own problem. For a large portion of the campaign, weapons feel weak and imbalanced against other arsenals, as you unload clip upon clip only for the enemy’s health bar to barely register any damage.

Later on, this balanced out for me once I slapped on multiple machine guns and rockets to compound those damage numbers. Of course, this is at the sacrifice of having any reliable control or area-of-effect damage, but at least I can see some effect on the enemy’s health. Due to clutter on the screen, it’s often difficult to discern which type of enemy you happen to be shooting. If it weren’t for arsenal call signs displaying above certain enemies’ heads, it’d be nigh impossible to spot differences between basic AI and the deadly elites.

Despite its flaws, though, Daemon X Machina does its best to satiate that twitch-combat appetite popular in mech combat games. Sliding around the ground while unloading a pair of assault rifles never gets old, and I found myself smashing every button I could to keep that combat flow moving. It can be overwhelming to maintain control over the multitude of weapons and systems at play in any given moment, but Daemon X Machina does a great job of leading you in slowly without boring you upfront. Even playing it so safe, this game has a good amount of heart coming from people who clearly enjoy the genre, and I’d be remiss if I didn’t express my desire for a sequel if just to see what kind of chances developer Marvelous, Inc. would take with experience under their belt.

Daemon X Machina works as a standard twitch-heavy action game, neglecting any deeper plot in favor of customizable, effective combat systems. Though it won’t stick with you after playing, this is a mech action game that garners some fun moments without being too experimental. If you’ve loved mechs before, Daemon X Machina will fill that void.

A copy of Daemon X Machina on PC was provided by PR for the purposes of this review. 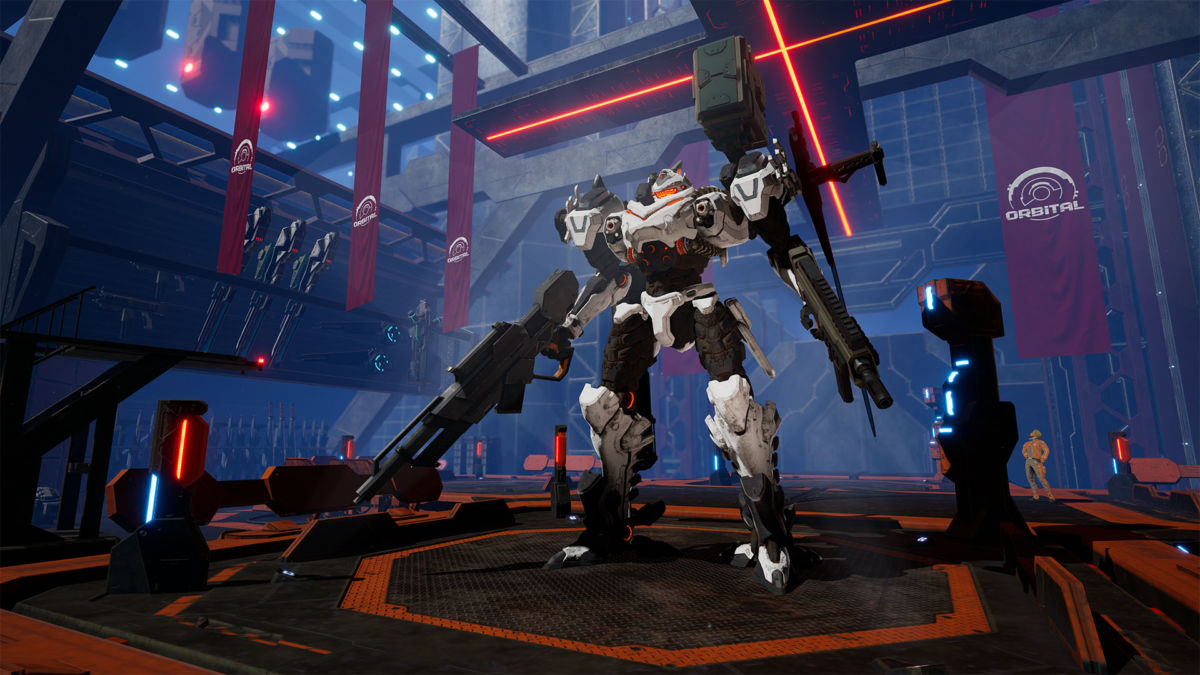 Verdict
Daemon X Machina works as you’d expect from the first entry into a new IP, taking few chances on story or combat, but delivering a relatively solid, if uninspired, twitch-heavy action game.
6
Cultured Vultures is a pop culture website established in 2013 covering all things gaming, movies, and more. We eat your words.
All The News On Your Favourite Games