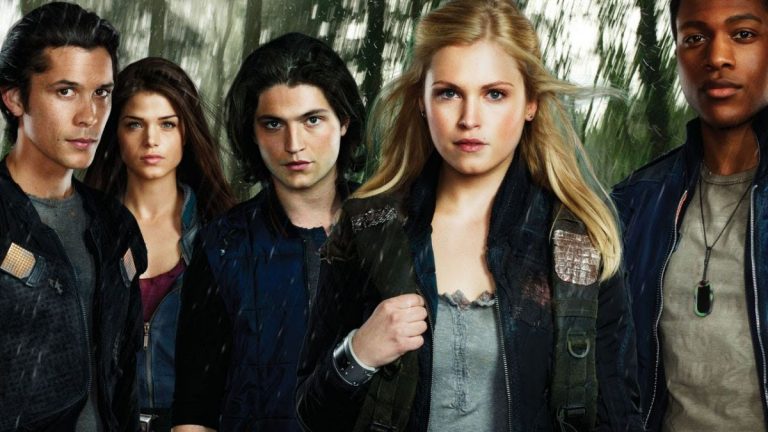 I binge watched the CW’s The 100 over the winter break and was hooked. So hooked, in fact, I wasted no time reading the novel that started it all. I was both disappointed and elated at The 100 by Kass Morgan, and don’t know what to make of it. Here’s why.

Imagine a nuclear explosion has been detonated and the survivors escape to the space stations. Flash forward three hundred years. All crimes on the space station are considered capital, punishable by death if you are over 18, imprisonment if you are under, with a second trial when you turn 18. Resources are scant and the technology is failing. The station jettisons 100 teenaged criminals to Earth to see if it is habitable.

The 100 follows the stories of medical student Clarke, teen mother-to-be Glass, Wells, the chancellor’s son, and Bellamy, the only person aboard over 18, who attempts to kill the chancellor so he can escape to the planet with his sister, Octavia. The pace of the story is slow, and peppered with un-introduced flashbacks which are confusing at times, but Morgan builds solid characters in a well-constructed world that makes me want to read more. The 100, the first novel in Morgan’s series is just the exposition. It ends mid-story and without resolution, which is frustrating, but makes me want to read the next installment nevertheless.

By contrast, the CW’s The 100 is so action-packed, if you blink, you miss something. Clarke emerges as the co-leader of the teens alongside Bellamy, Wells is killed off midway through the first season, and there is no Glass. A drug addict and secondary character in the novel, Octavia, is perhaps the most interesting and strongest of all the characters in the series (next to Clarke). Born a second child when the law permits only one, hidden under the floorboards in their tiny apartment on the station, Octavia is eager to experience freedom for the first time in her life on the planet. She meets Lincoln, a Grounder (the people still living on the surface) and strikes up a Romeo and Juliet-type relationship with him. Through her adventures and training with Lincoln, she learns there is more to life than flirting with boys and having fun. In addition to striking up a war with the Grounders, The 100 must battle the Mountain Men, people who have been living in the shelter of Mount Weather, using the blood of Grounders to cleanse their own of radiation poisoning.

In the novel, the Grounders are only hinted at toward the end, and there’s no mention of the Mountain Men. But as I said before, this is only the exposition of the story, which seems to just be getting started. Though I dislike reading a book devoid of plot climax and resolution, I do like the super-mega cliff-hanger that makes me want to read more, in spite of the fact I swore off serials a while ago. I can’t wait for the second half of this season’s The 100, but I’ll bite the bullet in the mean time, buy Day 21, the next book in the series, and hope it will tide me over until then.