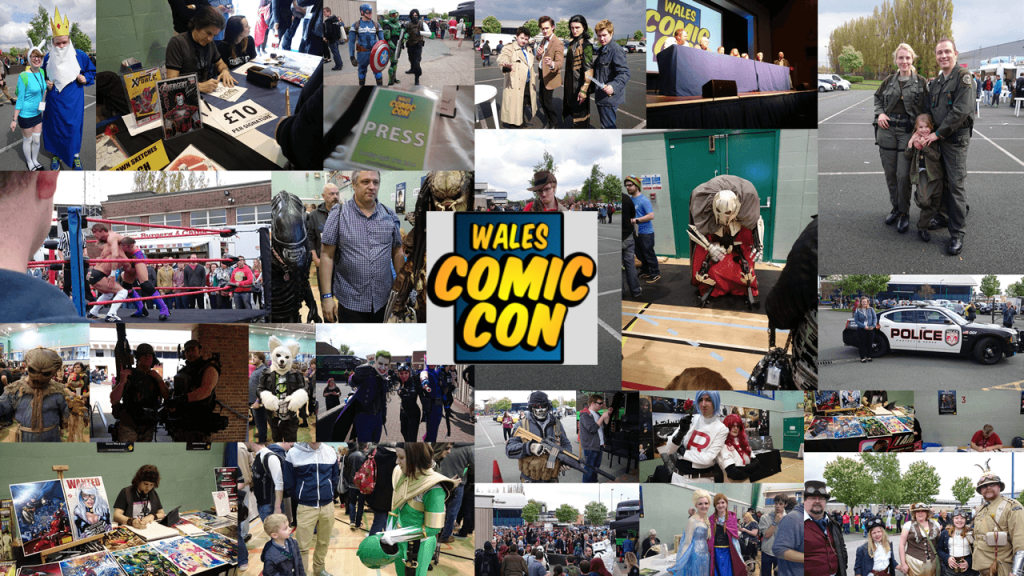 We had the honour of attending Wales Comic Con 2014 and it certainly did not disappoint.

We live by a few simple guidelines on what makes something good here at Cultured Vultures and if your event has a pair of loved up xenomorph and Predator cosplayers walking around, there’s no doubt that it will be the best thing ever.

This year, Wales Comic Con simply took it to another level – there was no shortage of gloriously geeky things to see and do as soon as you stepped through the grandiose entrance of Glyndwr University, you were totally immersed. However, as soon as you do enter, you might feel a little bit underdressed in jeans and a t-shirt as the cosplay on display was so passionate that it bordered on crazy. We are definitely going as KISS next year so we don’t feel quite so out of place. 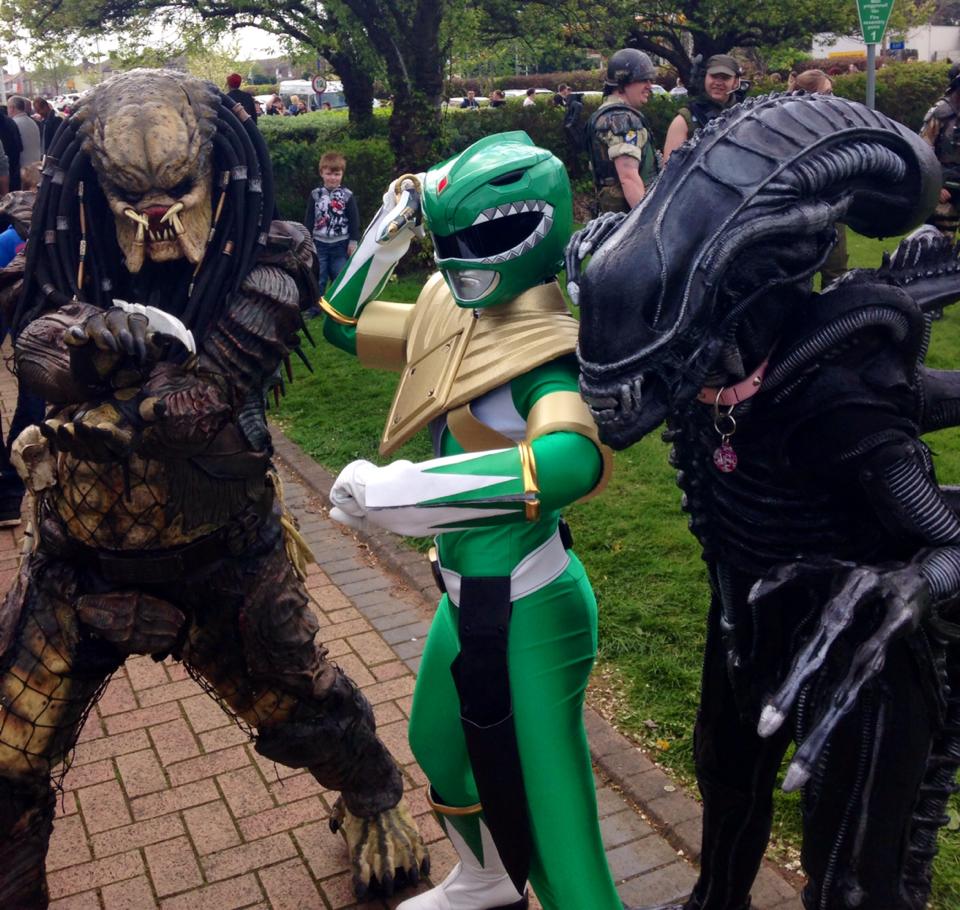 Being out of place in an aesthetic sense is just about the only way that you’ll feel awkward at Wales Comic Con though as there are many friendly faces around who all make you completely welcome – there’s no pomposity or standing on ceremony here. You can literally walk up to anyone (apart from Shane Ritchie. More on that later.) and start a conversation which is sometimes missing from a lot of conventions and festivals like this.

The guests themselves were all pretty premier names and even if you had to squint for a second with a couple of them, it would eventually click with you who they are. There’s little that can match witnessing the main character from Gremlins tuck into a fairy cake as most of the cast of Red Dwarf crack jokes five metres away and it’s this kind of madness that is going on all throughout the campus. It was a real treat to see Kenny Baker still making the effort to greet his fans, even if he did enjoy about six or seven hearty naps.

In the main hall, the definite main attraction was Charlie Adlard and thanks to his insane commitment to sketching pieces up for fans on the spot, we actually didn’t get to pester him. Being the dude that he is though, he signed and drew in a charity calendar for our friends at Geek Pride which you can bid on here. As proceeds go to a good cause and with many other famous faces getting involved, you should obviously be putting in a cheeky bid.

Special mention has to go out to all of the other artists who were eager to craft their art for fans on the day. Kris Carter agreed to an interview with us on the condition that it “didn’t interfere with his drawing” so we look forward to getting in touch with him soon!

More on Shane Ritchie: it was a strange booking to begin with and the guy really didn’t seem all that keen on being there. Any opportunity he could take to be away from his table, he would, and when actually at it, he would charge £15 for a posed photograph. Even though it was for charity, he was very standoffish in general but that doesn’t matter because we took this awesome photo of him anyway. 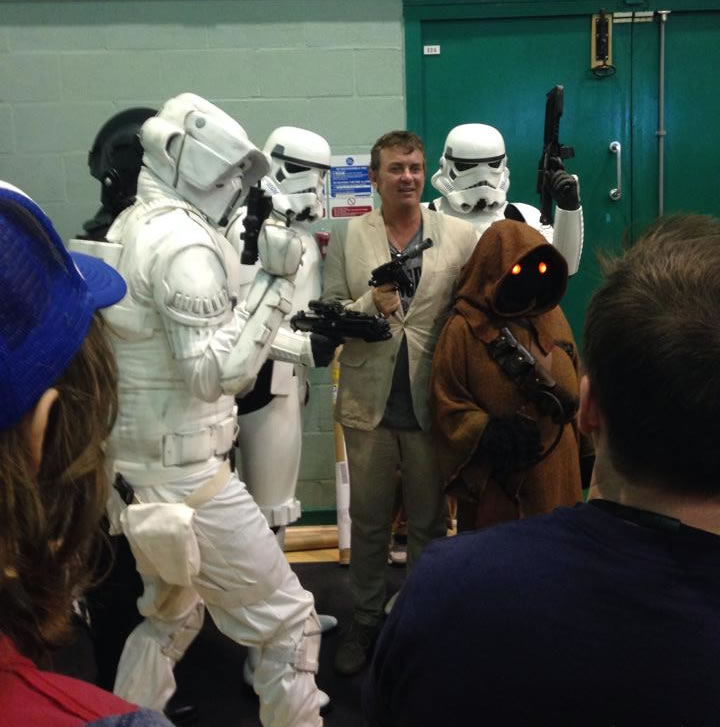 Let’s clear up the debate that we just started right now: Game of Thrones is the best television series of all time and The Wire can’t even begin to hold a candle to it. So, you’d imagine that people would be turning out in force for a Q&A with some of the cast, right? The auditorium was absolutely packed for what turned out to be an exhibition on how Aimee Richardson (Myrcella Baratheon) should switch to a career in comedy instead. When asked how she found working with some serious acting pedigree, she replied: “it’s crap” with the straightest face.

Ever wondered if Sean Bean has any vices? Mark Addy (Robert Baratheon) was more than happy to tell of a time when the Bean would kneel at his feet and “fancy chocolate like Twixes” would fall out of his jacket. Other anecdotes and minor revelations included Kit Harrington being told “you know nothing, Jon Snow” wherever he goes, Lena Headey used to wet herself over Sean Bean’s ways and that unsurprisingly, (SPOILERS AHEAD) they all loved watching Joffrey die.

Another Q&A we were lucky to attend featured Nicki Clyne (Cally) and Luciana Carro (Kat) discussing Battlestar Galactica and interestingly enough, when they were quizzed about the rumoured reboot, both suggested that it was a bad idea. When the audience was asked the same question, it was a resounding no. Studio execs, take note. One fascinating titbit we took away from the session was that none of the cast had any idea about what was going to happen next with the exception of Edward James Olmos who “always seemed to have one ear in the writer’s room”.

If anything, Wales Comic Con had almost too much to see and do but let’s just say that we crammed in a few spare minutes to watch some wrestling, jump on the gamer bus and marvel on at some serious card tournaments that were taking place within the short time we had.
More of the same for 2015 please.

Check out a full gallery of what we gone and seen below.