Craftopia Is A Messy Yet Ambitious Smorgasbord On Game Pass 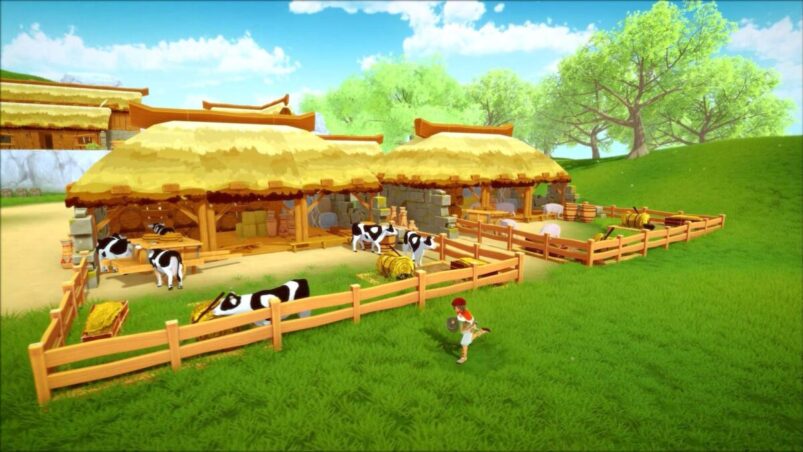 Earlier this year, I wrote an article about Palworld, a game from developers Pocket Pair that grabbed attention with its tonal whiplash-inducing debut trailer. The game aims to combine survival mechanics seen in the likes of ARK with cute pet mechanics not too dissimilar to Pokémon. It’s a unique looking fusion of two opposing genres, so it’s not a surprise to learn that they also produced Craftopia, which was recently released on Xbox through Game Preview, and is available on Xbox Game Pass.

After playing it for a few hours, I’m enjoying its “whatever sticks to the wall” approach to game design, as there’s elements here that feel like they’ve been cribbed from other games. The building mechanics look pretty similar to the building seen in Fortnite (you even pull out a book as you’re building), the traversal, stamina and world design feels like Breath of the Wild, there’s an RPG-esque skill tree, and the whole experience is wrapped up in a Minecraft flavoured bow. Crafting is to be expected in a game called Craftopia, but there’s also farming and a focus on automated material production for the more advanced players, which are all Minecraft staples.

Craftopia is pulling from a lot of sources then, and while the game falls into the pitfall of feeling janky as a result of its different influences competing for your attention, the result is a compelling melting pot of ideas that’s pretty fun to play with friends. While it’s likely never going to be a world beating survival/crafting game, it’s already a fun addition to the Game Pass library that’s worth checking out.

The premise of Craftopia is about as silly as it gets, as you start the game basically nuking the entire planet because, well, you succumbed to the maddening urge to press the jolly, candy-like button. Fortunately, some ancient gods decide now would be a good time for a learning experience, plonking you back into a newly created world and forcing you to scavenge for resources to create the tools and equipment you’ll need to survive.

What’s perhaps most appealing about Craftopia is the way it’s structured, even in this Game Preview state. From the get-go, you’re dropped into a small island with only minimal resources and areas to discover, but through gathering enough specific items, you’ll be able to progress to the next Age, which unlocks new tools, equipment and other toys to play with.

Instead of modern-day Minecraft, which honestly feels like you’re being bombarded with 10 years of updates in one go when jumping into it today, content is being drip fed to the player once they’ve proved the Age they’re on. Reinforced by a mission system that grants EXP, materials and inventory upgrades for completing basic tasks, Craftopia practically bends over backwards to onboard the player effectively instead of overwhelming them with stuff and expecting everyone to pick up the pieces.

Its approach to exploration is also pretty neat, as instead of exploring one massive, randomly generated world, the player is dropped onto a small island with an Altar of Transportation waiting to be found. Using the Altar, players unlock new islands via a grid-based system, which are full of their own secrets, minerals, monsters and discoveries. The further out in the grid you go from your starter island, the harder the monsters become but the bigger the rewards will be.

While on an island, you can find goblin encampments, various kinds of dungeons, mines filled with new materials to snatch, and so much more. There’s a lot to discover and grapple with in Craftopia, but again, you’re in control of how you progress throughout the game, so you never quite feel like you’re directionless. The only real issue is when you grab items you can’t actually use yet, meaning your base will be filled with chests of ore that’ll be sitting there until you progress.

However, even useless items still have a purpose within Craftopia. Not only can you sell items for cash to buy more from travelling merchants, any leftover items that you have can be offered to your Picture Book, which acts as a journal of all the items and gear you’ve discovered. Offering items in large quantities boosts your base stats, so if you’ve got a lot of one specific item lying around doing nothing, it’s worth putting them out to pasture in one form or another.

As Craftopia is a Game Preview game, it still has some issues that get in the way, chiefly the controls when using a controller. It can be quite fiddly to navigate the inventory, specifically when trying to assign items to the hotbar. On top of that, equipping and unequipping items, particularly those assigned to your off-hand, feels like more of a hassle than it should be.

There are also a series of bugs that are to be expected considering Craftopia’s Game Preview status, but might wear the patience of other players. At one point, the text randomly decided to look weird, and it still hasn’t fixed itself, while using beds as a respawn point doesn’t seem to matter when you load up the game, as you’ll still spawn in the same place. There’s also one particularly nasty issue where my co-op partner’s Xbox Series X would crash due to “overheating” when trying to approach one area of the game. However, I was playing on an Xbox One X and everything was fine. I wish I had an explanation.

Craftopia is also missing a few features that would make the game even better, though again, it is in Game Preview. The developers have rather earnestly clarified in-game that they’re working on a main story with missions to complete, which they’re hoping to release “soon”, so that should add more reasons to play the game. It also appears to be a straight port of the PC version, with lots of video options to toggle that aren’t relevant when playing on an Xbox.

One feature that would be stellar is terraforming. After a few hours of gameplay, your starter island will start looking a bit bereft, but due to its small size, it’s hard to fully establish a base with the little land mass you have. It’d be cool to alter your starter island’s landscape in some way to make it look fantastic, while preserving the integrity of other islands, but considering Craftopia isn’t a voxel game, that might be harder to do.

By no means is Craftopia a perfect game, nor do I believe that it will become one when it finally graduates from Xbox Game Preview in the future. However, Pocket Pair has established a game with real potential here, particularly when playing with friends. The solo experience might not be as compelling, but if you’ve got someone to play with (considering the game’s on Game Pass, it shouldn’t be too hard), and you’re looking for something that’s the gaming equivalent of a full English Breakfast, Craftopia is a solid bet.