Civilization VI on the Switch is an excellent port of the PC game albeit with some caveats. 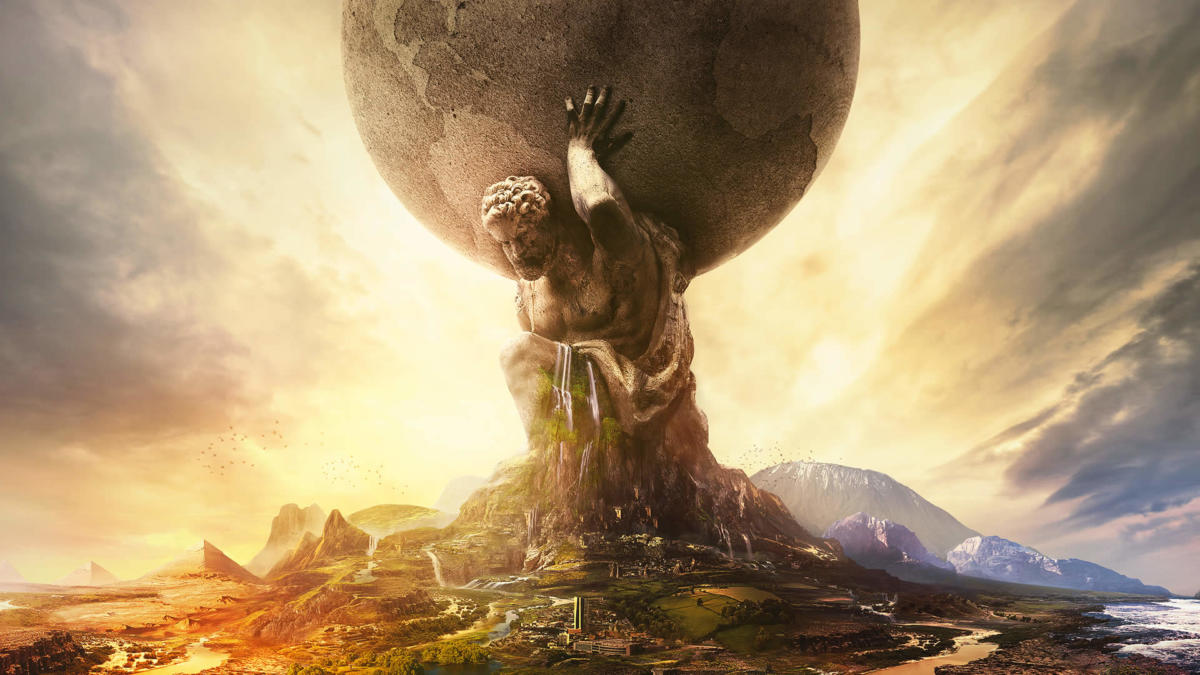 I must have poured thousands of hours into the Civilization franchise in total. There is just something wholesome and satisfying about taking one of several civilizations and guide them through a condensed version of history, dealing with human issues like feeding people in deserts, finding iron and other resources and avoid getting nuked by Gandhi. Of course, they have all had shortcomings but the core is still strong enough to lure me back into its warm time-murdering embrace, again and again.

Over the years, each new game in the series has tried to nudge or switch up the formula while keeping to the core of what makes it special. Civilization IV had religion and culture play a large part and V tried to streamline and clarify the gameplay and adding the city-state system which gave you other allies and enemies besides the core cultures. Civilization VI’s main new thing is a reworked model for how you build out your cities.

While the previous games mostly dealt with a single tile that housed your entire population, Civ VI has you building out in different districts. If you want to build temples and religious buildings, you have to have a religious district and if you want defensive and military stuff you need a district for that. It’s somewhat similar to how Endless Legend did it some years ago. By expanding your city out in this manner, Civ VI also forces you to pay more attention to the map and where to place cities and structures. Some wonders and districts can only be built on certain types of terrain. If there is a resource on the tile you want to build on, that will be destroyed in the process. It all forces you to have some more foresight in where you place your cities than before, which is a welcomed addition for further strategizing. 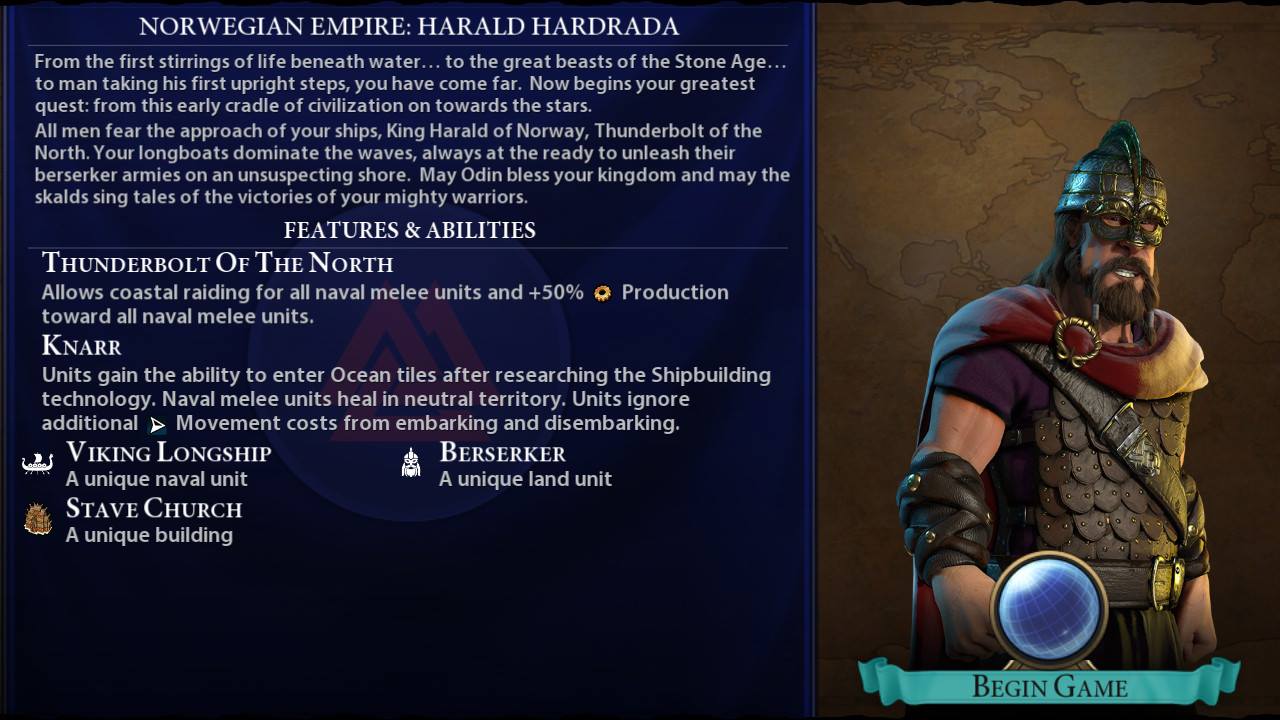 Workers and road building is also something that has been redone this time around and, in my opinion, is much improved. Before, workers were mostly there to be automated units that just went around and improved aspects of your cities without you really knowing what they did. They would irrigate land, build roads and set up mines. Eventually, every square of your empire would be criss-crossed by a spider-web of roads and different improvements. It not only looked odd but also made you feel like you had no agency over how the empire developed. Now, each worker can be used three times and you have to decide what to do with them yourself. Removing the automation makes a lot of sense in Civ VI since the map and the tiles are that much more important to pay attention to. Additionally, they can’t build roads anymore. That task is given to caravans and trade routes, so your roads actually have to go somewhere and not just a random barfed out web of confusion.

Technically, the game runs well on the Switch aside for some long initial load times. The controls are intuitive and easy to follow, especially since you can also use touch while in handheld mode. Most likely this is a rework of the iOS port of the game that was released last year but the controls are, for the most part, well implemented. You move around the cursor with the right stick and use A and B to highlight things. Menus are navigated by the D-pad and shortcuts on the shoulder buttons. It takes about ten minutes to get used to and I never felt it being a problem. Graphically, it is a bit muddier than on the PC but on par with how it looks on my iPad Air 2.

The main drawbacks with this release of the game are that it completely lacks both online multiplayer and mod support. Civilization VI’s first DLC- Rise, and Fall, which has been out on PC for almost a year, is not available as of yet on neither Switch nor the iOS version and it is unclear if it ever will be. When it comes to multiplayer you can still play in local mode between two switches. It’s for that special someone you can trap in your basement for 45 hours per game session, I suppose. Honestly though, for as many hours I have spent with the series, I don’t think I have ever played a multiplayer game to completion so the lack of it doesn’t bother me all that much. More alarming, however, is the lack of DLC and mods. Don’t get me wrong: the package has plenty of fun hours as it is, but mods and expansion packs are something that has always been able to extend the life of these games tremendously. The fact that the iOS version still hasn’t seen the release of the DLC nor even a confirmation that it is coming, is also cause for some concern. 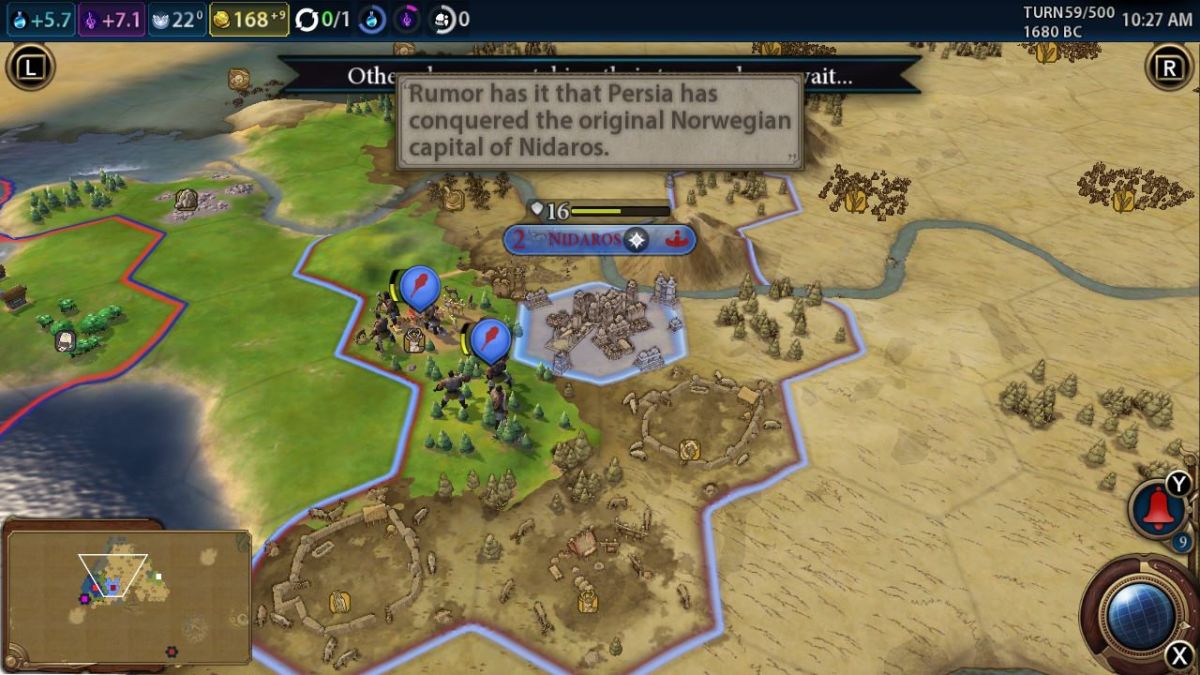 The game is fun and runs well but much like all Civ games on any platform, the late game bogs down and can easily become a slog. If you are on a big map with lots of factions, the turns can take quite a long time to sit through while the AI do their moves. It’s better than it was in Civilization V, but still not as snappy as you’d want it to be. It’s something that has plagued the series for years so it is hard to critique this version too much for it, though still worth mentioning. Another thing that has been dragging the series down for a long time is the combat. There just isn’t that much interesting to do with your military units. Almost all clashes between nations come down to who has the most troops and whether or not they are on a higher tech level. More primitive units have almost no chance at all against one that is upgraded. It is still functional but after all these years I would have loved to see this part fleshed out and expanded with a bit more tactical or strategical depth. Perhaps it is something they can explore and expand in a later expansion. If they end up coming to Switch, that is.

The Switch is slowly getting a whole pantheon of great ports of everything from indie hits to old PC frontrunners and Civilization VI is another proud example of just that. While the lack of the extra goodies that are on the PC is irksome, it is far from a deal breaker. The civilizations and the gameplay that is in this version of the game is still more than enough to keep you satisfied for a long, long while. Just don’t hog the bathroom all the time.

Verdict
Civilization VI on the Switch is an excellent port of the PC game albeit with some caveats.
8
Buy Civ VI