BOOK REVIEW: Cartoons in the Suicide Forest by Leza Cantoral 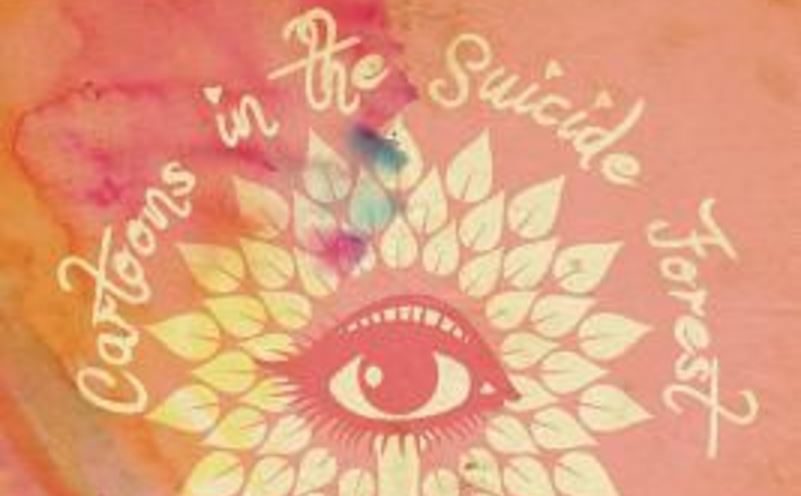 , contains a wide variety of stories, but most of them are marked by a gleeful, technicolor insanity. If Lisa Frank and Shintaro Kago collaborated on a comic series, these are the kind of stories they would come up with.

Take, for example, the titular story. A young girl falls into a depression after getting an abortion. It’s become trendy in her school to go into the nearby forest and cut oneself while posting the pictures on Tumblr. When she takes a camping trip in the forest, she’s confronted by creatures that resemble living cartoons.

“They start to dance around me. They move like they don’t have joins, like they’re made of rubber. As they dance a strange calliope song starts to play in the distance. It sounds like a scratched record. As it skips they skip along with it. It plays backwards and forwards, fast and slow.”

It’s a striking piece of psychedelic Bizarro that sets the mood well for the rest of the book.

Often, Cantoral will retell classic fairy tales in her own style. An example of this is one of my favorite stories, “Eva of Oz.” Eva, along with the Fuhrer whose brain lives in a mirror connected a computer system, rule the land of Oz and enforce beauty laws on its citizens with an iron fist, forcing everyone to have plastic surgery at the age of 16. One day, the Fuhrer realizes that a more pure and beautiful Aryan girl than Eva is somewhere in Oz. Eva sets out to find her to make her head her own.

“Mein Fuhrer and I love collecting our dolls.

This an entertaining and darkly hilarious story that shows the full extent of Cantoral’s demented creativity. The ending is a bit abrupt, but the humor, the prose, and the imagery more than make up for it.

Another example is the novelette “Planet Mermaid,” a science fiction retelling of “The Little Mermaid.” Cantoral’s retelling hits almost all the familiar beats of the classic tale, but she creates her own world for her mermaids. She even takes the love story of the original tale and twists it in a dark and unique fashion.

“They say that the Sea Witch was the greatest priestess of them all and that when she swam to the surface and saw the full moon in the naked light it drove her mad with visions and a power she could not control.”

Not all of the stories are Bizarro. Another excellent story in the book is “Green Lotus.” A married couple who can’t get along take a trip to a spa, much to the husband’s chagrin. When they get there, they discover the spa has a dark secret.

“They hung their robes up on pegs and got into the mud bath side by side. There was just enough room for them to lay their arms straight and not quite touch. The greenish mud at first was completely still, but then it began to bubble. Lilly and Robert sank into it expecting relaxation, but instead, they felt worse with each passing moment.”

This story fits neatly into the horror genre and is fine example of it as well. Cantoral’s colorful prose is used to excellent effect in this creepy tale.

“Gold chipped angels hang over the suicide pigs, gutted and bleeding in their corral.”

These vignettes are a kaleidoscope of beauty and ugliness. They remind me of the distorted pornography of William S Burroughs and the trangressive poetry of Georges Bataille.

There are two pieces here with no fantastic elements in them. “Cosmic Bruja,” a story about tripping acid in Mexico, and “Last Dance with Heroin,” a story about kicking a heroin addiction. Both of these cover well-trodden ground, but Cantoral is a talented enough writer to keep them from sounding trite or cliché. She writes about the subjects in a way that reminds me of the Beat Generation.

“Watching The Twilight Zone, doing the last of your drugs, you already feel free. Free from him. Free from fear. Free from running away from yourself. The b&w looks thick, like pudding. Everyone one is made of pudding. It looks like ice cream.”

The only story here I found lacking was “Siberian Honeymoon.” It has a great concept. Odette and Alexei are a Russian lesbian couple who get publicly married in spite of the persecution of homosexuals in the country. They’re forced to go on the run from the authorities and hide out in Siberia, where a group of feral cats congregate around their cabin.

Despite the excellent set up, I found the resolution both very predictable and poorly set up. To spoil the story, a soldier murders both Odette and Alexei and in retaliation, the cat’s gang up and eat him alive. I saw this coming when the cats were introduced, but the bond between the couple and the cats struck me as very unconvincing. While Odette dotes heavily upon them, the cats’ devotion in the end just felt forced.

Verdict
Leza Cantoral's debut collection is glitterbomb of a book. A mixture of colorful Bizarro, disturbing erotica, Sad Girl stories, and horror held together by Cantoral's masterfully crafted prose. She's a talented writer and I highly recommend this book. I look forward to what she comes out with in the future.
9
Cultured Vultures is a pop culture website established in 2013 covering all things gaming, movies, and more. We eat your words.
All The News On The Biggest Games