By the Horns: Dark Earth #1 Continues Its Potent Tale Of Adventure And Grief 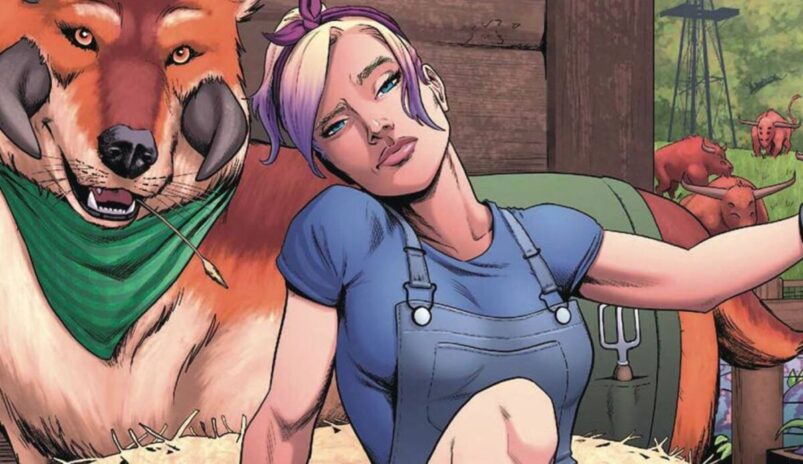 By the Horns: Dark Earth #1

From indie comics publisher Scout Comics, By the Horns has reigned as one of its most successful titles so far. The unified singular vision from writer Markisan Naso and artist/letterer Jason Muhr pushes the boundaries of SFF originality while paying homage to their obvious influences. It came as no surprise when Scout announced an extension of the initial maxiseries. And after a short gap between the eight-issue trade release and this reissued continuation, I’m pleased to report Dark Earth #1 commands all the attention its predecessors achieved.

Naso and Muhr are also joined by new colorist Steve Canon, whose artistry aligns effortlessly with the visual style on display.

For a story that initially began as a revenge-seeking action tale, the creator evolved the basic premise of By the Horns beyond what anyone might have projected. Almost more importantly though, the book has pulled off a tricky feat: Naso’s script weaves character development organically into the narrative. The comic remains character-driven and plot-driven in equal measure without feeling heavy-handed. It’s a rare feat to propel a story through essential character development counterbalanced by plot milestones progressing the narrative. By the Horns: Dark Earth #1 continues that careful balancing act with aplomb.

After a months-long search across the Solothus continent, Elodie, her half-wolf/half-deer telepathic companion Sajen, floating eyeball butler Evelyn, and her once-hated unicorn teammates Zoso and Rigby won in an epic battle. They defeated the magic-stealing sorceress Feng Po, combining the ripped-off horns of unicorns to form a mega-weapon during By the Horns #8. Finally, the ragtag team freed the captive unicorns and supposedly destroyed Feng Po’s floating, magic-extracting Augernaut machine.

The buildup to this final battle was executed magnificently. On a grand scale of epic proportions like this, where Elodie finally must move past her grievances against the unicorns she believed killed her husband to neutralize a world-ending threat, you wonder where the story can go from this point. But By the Horns: Dark Earth #1 promises to compound the elements that worked in the first arc and proliferate the stakes for both the new conflict at hand and further Elodie’s internal growth.

The new issue functions as an incisive interlude, filling in the time jump gaps and revisiting changed protagonist Elodie’s roots. By the Horns: Dark Earth #1 picks up six months after the events in the eighth issue. Elodie and Sajen return to their hometown of Wayfarer, accompanied by their giant eyeball friend Evelyn, to work as farmers and provide for their community. However, in Wayfarer and beyond, life is leaching out the continent. The soil is untenable, trees are dying, and water is running low. Add attacks from bloodthirsty beasts threatening their livelihood, and Elodie has got her work cut out for her defending Wayfarer’s farms yet still experiencing casualties in the aftermath.

Elodie has taken on the role of town protectorate. She cannot and is not content with a simple farmer’s life. Once unwilling to contribute to society and fueled by vengeful grief over her husband’s death, we see Elodie risk her life without hesitation to eliminate the Wayfarer invaders. And despite still working through her trauma, Elodie has learned to lean on others for support instead of isolating herself in anguish anymore in this issue.

A sense of deeper discord pervades the comic, where something unseen is working to dismantle what Elodie assumed she had handled. Readers are finally treated to a reunion between Elodie and the village council member and grandfather of her late husband, Haru. However, their conversation revolves around the current source of mayhem wreaking havoc on Solothus’ ecosystem, as opposed to a mentor dialogue between the old friends. Haru hypothesizes how the symbiotic relationship between earth and magic has been thrown into a fatal imbalance – which he believes Elodie can fix. Despite only receiving the sassier, more serious side of Elodie and Haru’s relationship here, it’s nice to see their bond remains intact through all their past damage.

The catalytic conversion sets Elodie’s next quest in motion with huge repercussions if she fails. She must find Zoso and Rigby again to help locate ancient magic on an unknown continent, or else all of Solothus will perish. By the Horns: Dark Earth amplifies the stakes for Elodie, but her newfound confident character doesn’t miss a beat. Regardless of her outward persona, the creators still want readers to know Elodie still has room for growth. She expresses the burden of the expectations placed upon her to Shintaro, her coma-induced husband, in a soaring moment of intimacy. Dark Earth #1 reminds us grief induces a palpable, profound influence on those who suffer from its darkness. Elodie wishes Shintaro could come with her on the journey because she wants the man she loves by her side again.

No matter how much compassion others have shown her, Elodie craves Shintaro’s companionship over anyone else. From the first issue, this dynamic has affected every part of Elodie’s journey. And even this far into her story, we still see a glimmer of possibility in Shintaro’s hopeful revival someday and the visceral effects his current state continues to have on Elodie until then. This is why I sing the praises of this comic series. Muhr’s fluid art and Canon’s vivid coloring spliced with innovative panel layouts sing during the fight scenes. And on the same level, their illustrations distill the psychological layers underneath the fun adventure romp that makes By the Horns so influential.

I’ve said it before, but By the Horns is a masterpiece. The comic vibrates with relatable themes, characters, and a visually dazzling world that feels tangible and concrete. In the utter pantheon of monthly comics available, I implore you to pick up By the Horns every month, where its small moments work as a canvas for the grief we have all felt at one point in our lives.