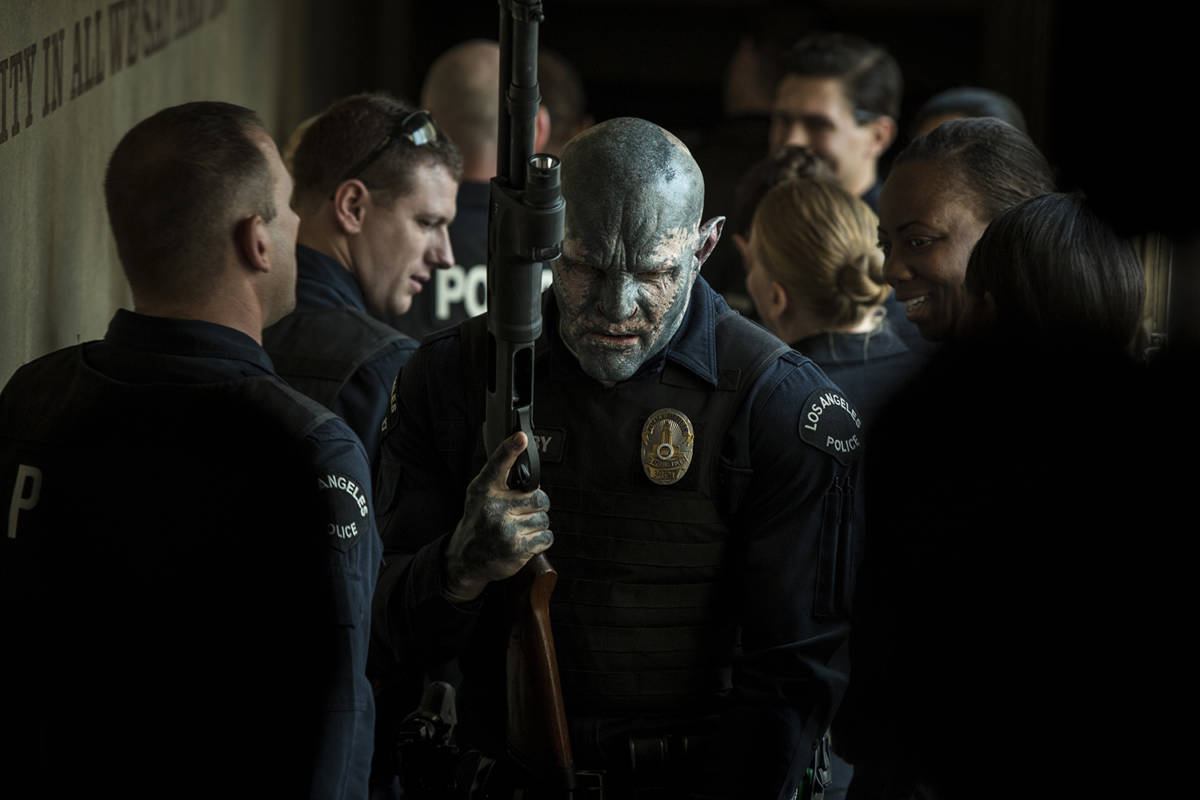 Bright tells the story of Daryl Ward, a down-on-his-luck cop just returning to the force after being 12-gauged by a lone Orc gunman. When his partner, the only Orkish cop in the whole planet, Nick Jakoby, accidentally lets the criminal flee, he finds himself under the heavy spotlight of the entire world, eager for his head to pop. When one night they encounter a mysterious Elf Girl carrying none other than the infamous, world destroying Magical Wand, can the rag-tag pair cover each other’s backs with trust when every gang in Los Angeles wants it for themselves?

When Bright’s trailer dropped one moist July afternoon, it immediately blew up from premise alone: A buddy-cop movie helmed by Will Smith and an Orc (played by Noel Edgerton), a contemporary “fantasy” world filled with elves, humans and orcs struggling to remain equal in a dour, crime-riddled LA, and the promise of hardcore, ballbusting action. For weeks after the trailer’s release you could hear Orc Cop Movie resonate ever-so faintly on the Twittersphere and in confused forum posts everywhere.

Now, two weeks after the pungent orc stench poofed on the Netflix Trending bar, how does it actually smell?

While it’s no testosterone-pumping body spray, it’s definitely not a sticky, nose-melting toot either.

People jumping in expecting Bright to be something more than what the trailer showed won’t be impressed. Granted, the premise does allow for some very earned imaginative desires. Will it be this magic/gunfight blend with creative choreography and off-the-wall stunts? Eh, a little. Will it be this dodgy, political narrative of gang control and shocking backstabs? Not really, no. Will it be a copy-paste, shaky-cammed, hurl-inducing typhoon? Just a little.

But there are so many wasted opportunities here. So many that it’s almost criminal.

After this point we’re going to be jumping into HEAVY SPOILER territory, so if you want to remain pure, halt this very moment, soldier. Although you don’t really care, do you? It’s Orc Cop Movie, for fuck’s sake.

David Ayer, Max Landis, and crew have delivered unto us a concept that lives and dies by the logline. It’s a world teeming with fantastical creatures, pulling no punches as it opens the film by showing us an LA draped in graffiti, giving us a glimpse into the sociopolitical pyramid of this brave, dangerous new world. Sadly, though, any chance for interesting discourse between classes, or any possibility for a slow paced drama dies as soon as Will Smith utters the phrases:

“I’m going to be honest with you. I don’t fuck with no fairies.”

And yeah, this kind of corny, “hip” dialogue was very much expected in a film like this.

Thankfully, though, it dies down rather quickly as the actual plot of the movie picks up and we get introduced to the McGuffin and subsequent plot device for the film: The Magic Wand.

“Oh, fuck”, you might be thinking. “Am I going to seriously subject my precious eyeballs to two hours of Will Smith and an Orc slinging spells around while shouting DnD-esque one liners?”

Thankfully, the one aspect this movie actually warps to somewhat good effect is this cursed Magic Wand I mentioned. I say cursed because it’s not your typical, whimsical and flowery granter of dreams. It can certainly do that, as the film boldly states that it can “do anything and everything that you wish”. But despite that, you might want to stay away. This thing is eldritch. Not only will you essentially disintegrate the moment your quivering, yearning hand grazes the thing, but it can throw waves of body-melting force randomly and without any brakes upon being touched. Get close to it at all in your bottom half may turn into the very air you breathe. This is by far the most surprising and engaging element of the film, and while self-harming magic weapons aren’t new in the slightest, this could’ve been a foundation for some heavy-hitting, almost psychological interplay.

Instead, every goon, hoodie or thug that comes across the damn thing gets drawn to it like a gnat to a glowing insect trap, as they idiotically pick it up and promptly turn into nothing. Not even their fucking scent is left. Magic Wands, in this world’s own words, are legendary artifacts that every single person knows of and highly desires, the mention of their existence enough to get people shot.

The only way you can handle the thing is if you’re what’s called a “Bright”, a being capable of using magic through the Wand. Most Brights are Elves, and while Human Brights are extremely rare, you could say that this sliver of a chance is what is causing everyone to freak out. Granted it does play into a theme of “the overpowering nature of greed”, but you’d think at least one of these fuckers would think before rubbing their greasy hands all over it and turning into pixie dust.

Anyway, past the underutilized WandGuffin, the plot is as milk-toast as you can imagine. From the evil She-bitch wanting to resurrect a literal “Dark Lord” and ending the world with the Wand, to the scrappy, “cute” elf girl that steals it and escapes from the encroaching gangs with the cop duo. Everything falls into place as a generic police-centric action flick, save for some very specific moments.

Firstly, the protagonists get their shit kicked in during this movie. Pretty much in every action scene, Ward and Jakoby get sliced, pierced, popped, suckered, kicked, thrown into walls, suplexed and even choked. Hell, Jakoby fucking dies by being beaten to a pulp, shot through the back and being thrown down a pit. In the moment, this scene causes a very pleasurable surprise! Not because the obnoxious and useless Orc is finally dead, but because something shocking and unique finally happened in this movie! Well, before you realize that Elf Girl has the literal Finger of God at her disposal, as she subsequently brings him back from the dead. So much for risk. 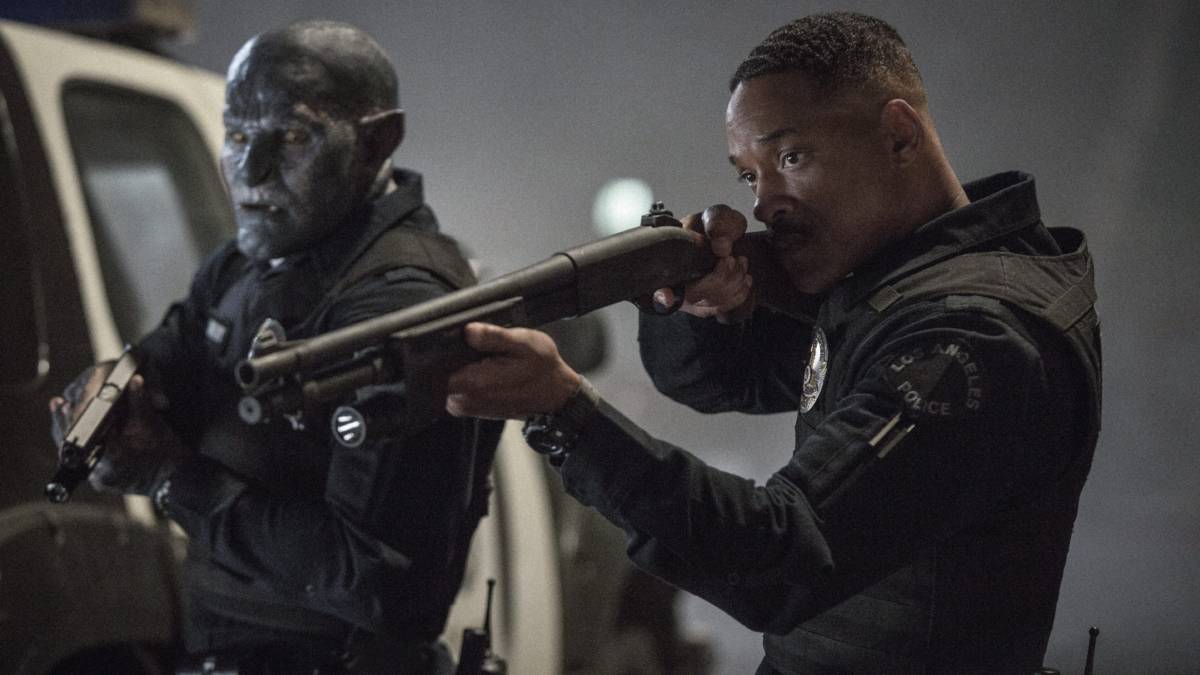 Secondly, these action scenes are shot pretty solidly, to say the least. It’s no The Raid, but it’s actually quite impressive for such an otherwise unexciting movie. You’ll see Ward and Jakoby use different props scattered around the set to smash, block and throw at enemies, as full on gunfights are a rarity. As the film progresses, more emphasis is put on brutal, bloody, and visceral hand-to-hand encounters, which all feel frenetic, punchy and very visually satisfying. There is also variety in the settings, from side-by-side car shootouts, to acrobatic steamrolls through strip clubs, to the occasional use of sweeping (if slightly too grandiose) slow motion cuts. If you’re a sucker for decent action, this film packs a punch you can’t help but appreciate.

Lastly, Ward himself is a superhero of unprecedented raw power and convenience. Not only does he survive hit after hit of bullets, knuckles and even the power of the Wand, but the motherfuckier is actually a Bright. In the end he grabs the wand, says some magical mystical shit, and kills the She-bitch. Honestly, I’m not even surprised.

Bright is a forgettable, barely passable action fling that loses control of the details, fails to utilize its worldbuilding potential, and strums ever-so-lazily down the road of predictable mediocrity. Despite that, serviceable cinematography and some surprisingly inventive action sequences elevate it ever so slightly.

Verdict
Even through its narrow plot and lack of inventiveness, Bright still manages to be just entertaining and striking enough to stand on its own as a showy, harsh action romp. Expect no surprises, though.
5
Cultured Vultures is a pop culture website established in 2013 covering all things gaming, movies, and more. We eat your words.
All The News On The Biggest Games