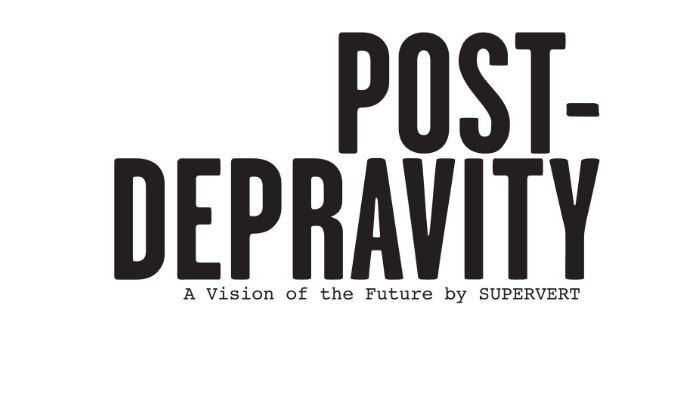 “Sex should be like an act of suicide. It should aim at oblivion.”

The story of Post-Depravity takes place in a hospital in the near future. A doctor by the name of Malenkov has sealed himself in a lab called S&M R&D. From there, he broadcasts on the internet under the moniker of “Dr God-Damn X-Ray Spex.” His vlogs (always showing a white screen) give predictions of what perversion in the future will entail. A nurse named Murasaki, a radiologist named Ben Said, and an actress in the simulated patient facility named Kat all become obsessed with Dr. Malenkov’s predictions. Murasaki begins filming her various acts of debauchery, including sexual torture and murder, and slipping the footage under the door of the S&M R&D Lab in hopes of eliciting a reaction from Dr. Malenkov.

“When the video concludes, Murasaki peers at Kat. A straight, unwaisted dress outlines the figure that enables her to portray adolescent pathologies in the simulated patient facility. ‘Would you you be willing to act in faux kiddy-porn films?’ – Kat puts a fist to her mouth, knuckles in her teeth. She knows she would feign along. She would submit to post-depravity the way that a cancer patient submits to end-of-life care.”

The primary concern of Supervert’s novel is, of course, the relationship of technology and medicine to the psychology of human sexuality. For example, one of Dr. Malenkov’s predictions is “exocortical perversion.” That the perversions of an individual could be taken out of one’s brain and implanted into another’s. It brings to mind the idea of implanting memories. If memories can be implanted, why not the perversions of another?

Transhumanism by way of perversion is also explored. Another one of Dr. Malenkov’s idea is that of an “anti-vagina” likewise an “anti-penis.” Through medical and technological advances, the genitalia of the post-human may be entirely the opposite of what we currently think of as genitalia. If the human body can be designed, it can be created in a way to act out (or be acted upon with) new means of sexuality.

“The anti-vagina is a position in what Dr Malenkov calls V space, the theoretical range of possible genitalia. He predicts that advances in cosmetic surgery will enable women of the future to realize anti-vaginas in their own flesh.”

Supervert’s prose is full of evocative images. Every page is a tableau of violent perversion and the deceptive tranquility of a hospital’s hallways. Images of surgical openings, the industrial architecture of the hospital, the smell of semen and medicine, and the sounds of fucking and heart rate monitors come through on every page.

“The light descends from the ceiling. The walls are covered with colorless primer – uniform, abstract, impervious to time. On the floor is a cotton shift the hue of dried bone. It lies not in a crumpled head but a trail, as though shed by a wounded person crawling for help.”

Obviously, this is not a book for everyone. Subject matter aside, Post-Depravity is primarily a novel of ideas. Because of this, many find the characters and the story too thin to enjoy. It took me far longer to read this book than I expected. Partially because the ideas took a lot of mental energy to digest, but also because the plot moves at a snail’s pace.