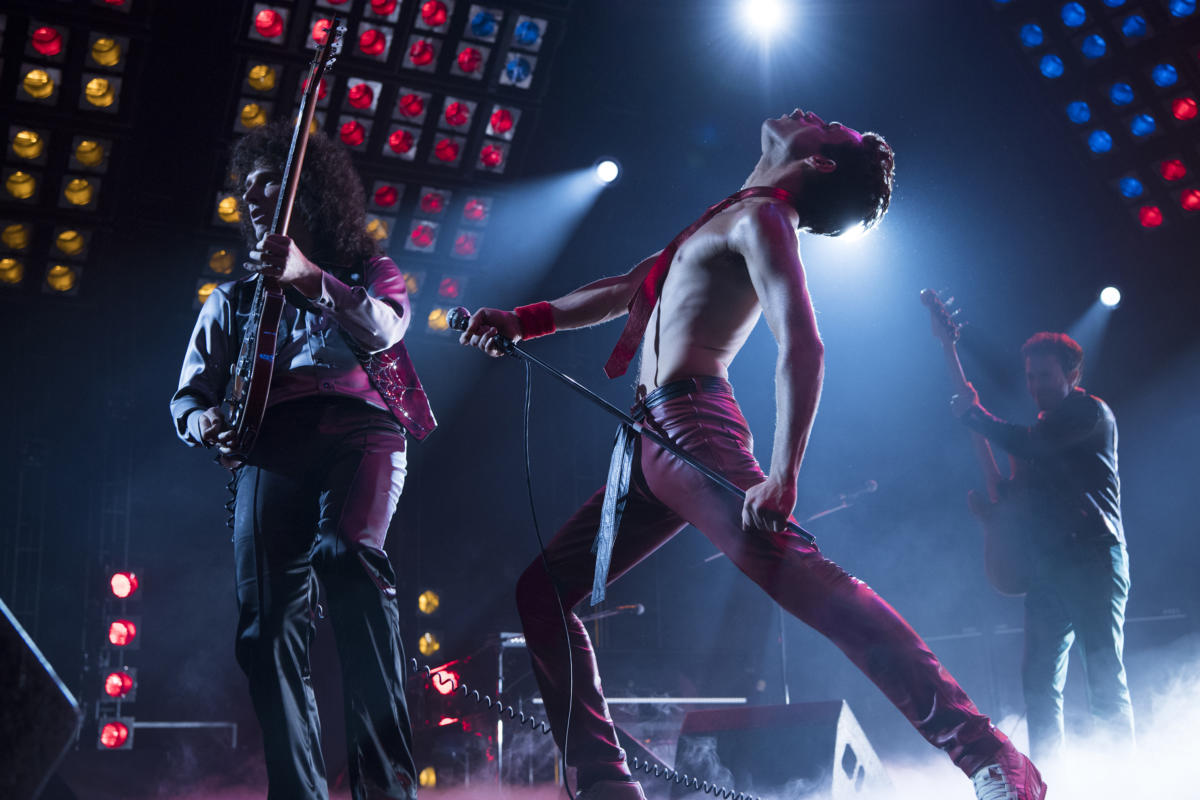 Bohemian Rhapsody may be another by-the-numbers biopic, but boy, does it rock. How could it not, when it always has Queen’s music to fall back on? For all its flaws, this movie knows why we’re here.

From the beginning, Bohemian Rhapsody infuses itself with the playful, flamboyant spirit of its subject Freddie Mercury, with a guitar riff over the 20th Century Fox logo. Films like this don’t so much require the lead to play their subjects as much as channel their spirit, and Rami Malek more than delivers. He is awe-inspiring, embodying Mercury not just in his quieter moments when he’s interacting with the band who became his family, but in the fantastic performances. There are few frontmen who had Mercury’s voice, his range, and the kind of presence that could mesmerize an audience, no matter how small or large. It’s no small feat for an actor to inspire even a fraction of that onscreen, but Malek makes us feel like we’re seeing Mercury once again in the flesh.

It’s very much needed, since without Malek’s performance and the incredible directing (which is its own issue, what with Bryan Singer’s firing and still getting credit for it despite Dexter Fletcher taking over), “Bohemian Rhapsody” would be a huge disservice to Mercury. Rather than really exploring his life, the movie goes through the familiar beats of the music biopic as if it’s a list it feels obligated to check off. There’s Mercury’s early beginnings at a mediocre job, the rift between himself and his family, and the early romance that ends once fame enters his life.

Frustrating doesn’t begin to describe the missed opportunities the movie could delve into and bafflingly avoids like the plague. There was never any doubt that Mercury was born a born performer, but a star. He also led quite a fascinating life that could truly make Bohemian Rhapsody stand out. His Parsi background, his early life, and his religion is barely delved into. Lucy Boynton is given an especially thankless role as the wife who is always understanding and loving. When Mercury tells her he thinks he’s bisexual, she is the one who tells him he’s gay. How exactly they came to have the loving, supportive friendship is also entirely glossed over.

After Mercury does come to a kind of acceptance about who he is, Bohemian Rhapsody almost seems embarrassed by it. It shows his time in kinky, darkly lit clubs as a result of the influence of Paul Prenter (Allen Leech), a toxic snake who the movie blames for Mercury’s increasing isolation and descent into celeb hell.

Thank goodness for the music, because whenever Bohemian Rhapsody drags – which is often – it has Queen’s catalog of songs to fall back on. Because it doesn’t just take some serious backbone to embody even a fraction of what Mercury brought to the stage, but to recreate Queen’s Live Aid performance, which many consider the greatest live show of all time. The movie’s rendition of this moment is almost transcendent, doing justice to a moment where Queen solidified their place in pop culture and assured their comeback.

But even this isn’t enough for the movie, as it makes this moment yet another opportunity to check off the last few items on their list of cliches. It not only has him wrestling with his AIDS diagnosis (which came after), but finally reconcile with and earn the approval of the stern father he spent his life rebelling against. The fact that the Live Aid show itself is so damn enjoyable is almost in spite of the movie, not because of it. Maybe Sacha Baron Cohen can one day make the outrageous movie that he envisioned rather than a conventional story that’s more interested in crowd-pleasing than doing Mercury justice, but such a possibility feels sadly remote.

Verdict
Some good direction and Rami Malek's performance isn't enough to make Bohemian Rhapsody stand out, but it does occasionally make for enjoyable viewing.
5
Cultured Vultures is a pop culture website established in 2013 covering all things gaming, movies, and more. We eat your words.
All The News On The Biggest Games