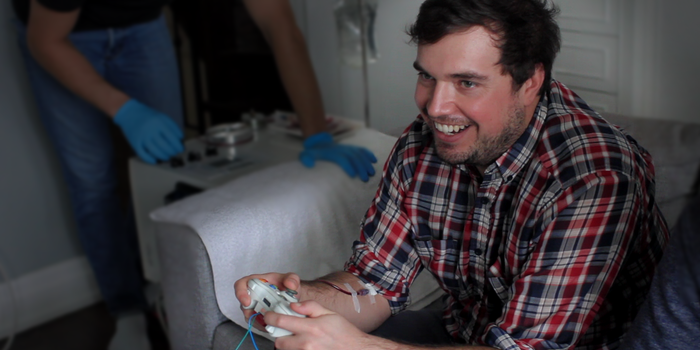 Is giving blood too boring for you? Do you feel that it’s missing something awesome? Would you be more likely to donate blood if it was as exciting and hyped up as your adrenalin junkie pushed to the limit lifestyle? Yes? Then stick Blood Sport in your veins and let it drain you dry!

No, not the film Bloodsport starring Jean-Claude Van Damm that you used to watch on a knackered VHS because  violence! Plus that sweet leg break scene and Van Damm over coming temporary blindness to kick all kinds of ass!

You should know that I roared every single syllable of that TO THE MAX.

Anyway, that’s more than enough energy and enthusiasm expelled for my liking. Blood Sport is pure and simple a way of draining your blood for fun, or more accurately it’s the hope of its creators to make donating blood more of an experience, by bringing video games into the mix, to encourage more people to give – especially those who may not have thought about it otherwise.

The idea behind it is a highjack of console controller’s rumble pack so as to connect it to, what the makers call, a ‘blood collection system’ which of course connects to you, the player. The intention being that, as opposed to the traditional vibration of the controller you feel each time you take a hit, the rumble pack would trigger ‘the blood collection system’ to withdraw blood from the player.

For all concerned, players would be required to sign an injury waiver prior to play and the system is of course controlled in regards to its taking blood, being set up to power down when it has withdrawn the given limit from any player. The project had been hoping to be up and operational for a multiplayer launch event in March, 2015 – coinciding with the launch of the uber-hyped Battlefield Hardline. However, as of the start of this week Kickstarter has suspended the project.

The creators, Taran Chadha and Jamie Umpherson, have vowed to continue on with achieving their ambitions for Blood Sport saying  that they just “genuinely want to bring attention to and help blood donation in Canada with our project if we can,” and “motivate the gaming demographic into getting involved in donation through our project.”

Kickstarter have declined to comment on the suspension, citing a policy to not do so. However, it might’ve had something to do with the fact the top reward for supporters, having pledged CAD5,000 (£2,840), was an invite out to the pair’s apartment between January and March to try out the single version and receive the code and instructions to create one of their own… Yeah…

Anyway, as said the pair are going to persevere in spite of this, hoping to arrange affiliation and partnership with a blood clinic, and encouraging others to contact celebrities to endorse the project and even attend the launch and take part. Two particularly celebs they’ve been keen on attracting are Snoop Dogg and Seth Rogen. I didn’t think you could still be a donor when your blood is essentially liquidised weed.

Anyhoo, what’s your thoughts? A genius way of persuading more people to become blood donors? A ridiculous gimmick? Would it affect your post-donation gaming being able to relate to those pixels you let take a murdering on the reg having felt their pain?