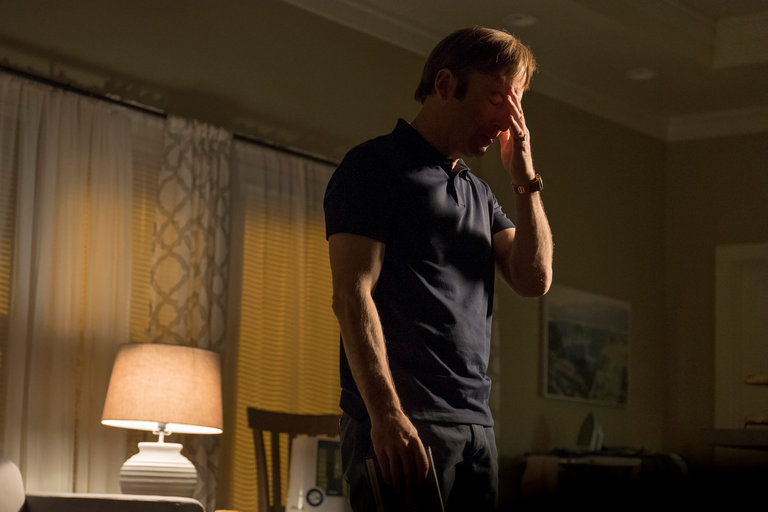 In our elementary school science lab, we were instructed to form a circle by holding each other’s hands. The instructor completed our circle while holding an electrically charged object. We all felt the charge, a buzzing in our fingertips.

It’s interesting how Chuck McGill only feels the charge after breaking his inner circle. Something about pushing people away leaves him vulnerable to this debilitating mental illness. In the season 3 finale, after dismissing his brother’s admission of regret, Chuck lies awake in his bed appearing smaller and frailer than ever. The camera pans upward, framing the bed in such a way to emphasize Rebecca’s absence. And the musical score while he’s dismantling his house—it’s unlike any other piece of music featured in Better Call Saul. It’s hauntingly beautiful. This sequence isn’t theatre. Chuck isn’t performing. This isn’t foil on the walls to entrap his brother. This is him breaking his confines apart. He is hunkering down away from the world, even pushing back his psychiatric appointment. He’s barricading himself against any tangible connections, de-wiring his house and severing off any emotional currents.

By the end of his unravelling we’re able to peer through gaping holes, see into one room from the next. There is nothing left to subtract or tear apart. Chuck sits in his chair hammering the desk with his heel until the lantern drops. He is tired of hurting.

Let’s rewind to his most recent human interaction, the one with his brother. He tells Jimmy not to bother with regrets, and the way Chuck speaks isn’t manipulative or any means to an end. It’s pure, unadulterated honesty. Jimmy even flinches at his brother’s words in the way a child might. This is a parent fed up with their child’s repetitious destruction. We believe everything Chuck is saying because he has always been able to describe Jimmy to a T, down to the gnashing of teeth and pouty eyes full of regret. Jimmy hurts people—always has and always will. And even then, we’re on Jimmy’s side, not Chuck’s, because of that final line: “I never cared all that much for you.” The audience cares less about the law and more about the heart. Because Jimmy’s glaring flaws aren’t all that different from us. But he is more dangerous. He’s got the gift of gab and a heart of gold, an explosive combination.

So has Jimmy earned our loyalty? Or have we been tricked? Look at Sandpiper debacle and how he turned Irene’s friends against her. The old ladies represent us, the audience, always on Jimmy’s side despite him being at fault. “You’re a good person,” they say. And with no other option left, Jimmy falls on his own sword during Chair Yoga, a scene that’s both cringe-inducing and fun to watch. It isn’t easy for him to play recipient to someone’s hatred. It’s an act of contrition reminding us that the road to Saul Goodman is a long one—he proved this first during a sweet and somber exchange with Kim in the kitchen when he said he didn’t “give a damn about the office”. What he loves most beyond anything is Kim.

What about the years before Kim? Before he knew her, what did Jimmy want? It’s a question the writers have offered glimpses of and will be necessary to answer in order to resolve this show wholly. The finale featured the shortest teaser so far. “Lantern” began with a flashback. Chuck was reading The Adventures of Mabel to Jimmy as the camera crawled slowly from the darkness, into their tent, and upward into a lantern. Their lamplight served almost as a portal to another time and place long before it was all Chuck had left to navigate his emptying surroundings. His house grew outward, less of a set piece and more a manifestation of his deteriorating mind. Despite whatever connection Jimmy longed for, Chuck would eventually tell him that none of it meant much of anything. And it sounds true when Chuck says it. But at that point he’s lost Rebecca and HHM and, ultimately, control over his mental faculties. So screw it. Burn it all down.

The Adventures of Mabel tells the story of a little girl helping the King of all the lizards, and in return she is rewarded with the gift to speak to animals. The story was first mentioned in Season 3, Episode 1, “Mabel” while Jimmy helps Chuck peel the foil from his walls. Jimmy attempts to reminisce with his brother but Chuck shuts him down and says he will never forgive Jimmy for what he’s done. The law is sacred above all else. And in “Lantern”, just ten episodes later, we get to see this very memory play out, the memory of Chuck reading to his little brother. If the character of Mabel represented anyone in Better Call Saul, it’s Jimmy. Jimmy has the gift. He can speak to anyone and charm his way into getting what he wants.

Jimmy says, “I’m no good at building things up! I’m better at tearing them down.” And it’s a nice line echoing what Howard Hamlin said to Chuck, how they had built up HHM together only to have Chuck try and tear it down out of pride. To win the audience’s favor it’s not about the fact that they’re tearing something down or building something up—it’s what they’re doing it for.

Howard was willing to pay Chuck out of his pocket in order to save the firm, because Howard’s ego, as big as it is with his suits nicer than anyone else’s in the room, isn’t anywhere big as HHM. Even Kim’s ego isn’t so big as to further compromise her health. She would rather push back all her appointments to enjoy some Blockbuster movie rentals and cheese crackers with cheese dip. Then there’s Jimmy: he would take the fall and risk his entire reputation with the elderly just to spare the heart of Irene, a woman he realized, in hindsight, he wronged. Or look at Nacho who will keep his cool a while longer just to attempt murder on Hector Salamanca. Or Nachos’ father who will swallow his pride at his son’s request. Most of these characters’ problems stem from their egos, but it’s Chuck who has allowed his ego to overcome him.

It’s tempting to name Gus Fring as the King of all lizards as a note of foreshadowing—Jimmy may help him at a later date and be rewarded with the ability to help more criminals—but it’s more tempting to name Chuck McGill as the King, because Jimmy already speaks with a silver tongue and he’s been helping Chuck for many years. But there’s a more interesting comparison between Better Call Saul and The Adventures of Mabel.

The author of The Adventures of Mabel, Harry Thurston Peck, faked reviews of his own book under a different name, Mr. Pyke, and his lie eventually screwed him out of the literary world. Then in 1914 he shot himself. The coincidence of his suicide and Chuck’s unraveling isn’t the interesting part of this comparison, though; it’s the idea of Jimmy’s creation of Saul catching up to him. Season 3 opened with Gene finally speaking and passing out behind the Cinnabon counter. He’s not satisfied with how his life has turned out, and it’s likely he’s still willing to fall on his own sword or at least take another risk if it means absolving himself of these burdensome regrets. 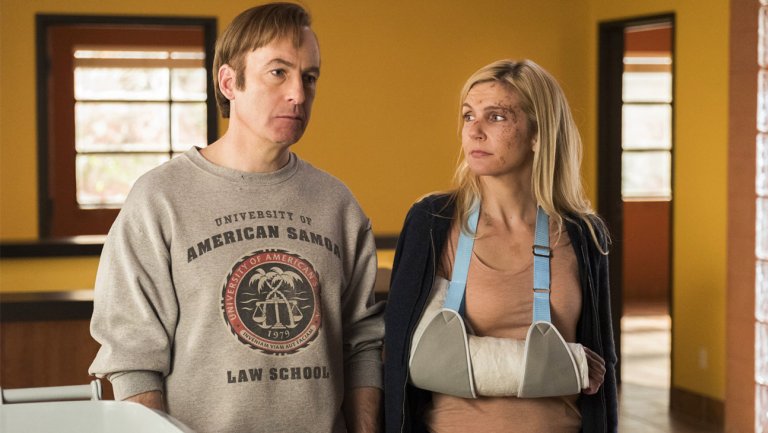 – My favorite line was Rhea Seehorn’s, when Kim’s attempting to cut the breakfast sausage and Jimmy looks at her as if wanting to help. She says, “You’re not feeding me, Jimmy. That’s a line that we do not cross.” Dammit, she can feed herself!

– When Jimmy tells Kim he will fix things, she kisses his hand. It’s his left hand, the one wearing Marco’s ring. It begs the question: will he fix things the right way or through some convoluted, morally gray plan?

– Kim is not wearing a suit. She’s in pajamas and a tank top. And her hair is down. Note how different this is in comparison to Jimmy who we’ve seen undress himself in a parking lot multiple times this season.

– A clever twist was Gus reviving Hector, the man who would eventually ring the bell that kills Gus. Another choice queuing inevitabilities.

– Thank you to everyone who has been reading my reviews and sending me kind messages. I’m still writing for Cultured Vultures, doing Twin Peaks: The Return and a few others. You can always listen to my film podcast, John Plays the Piano. And I’m on Facebook if you ever want to shoot me a message and chat.

– Update 22/06/17: Thanks to a previous commenter for correcting me about the flashbacks.