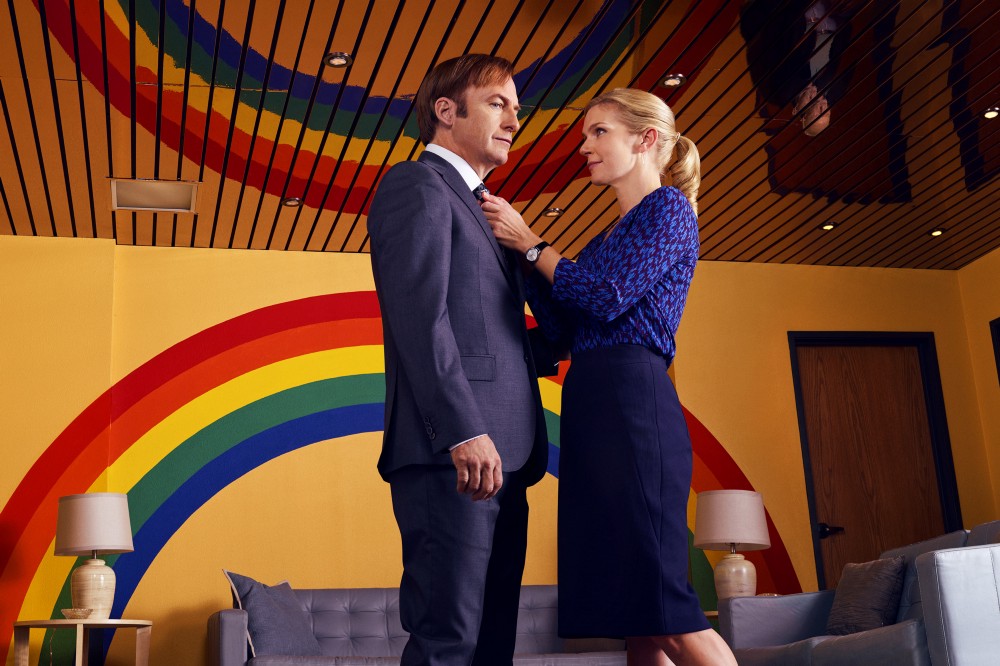 Black and white flash-forward teasers haven’t featured much dialogue during the first two seasons. For a moment during Better Call Saul’s third season opener it appears as though Jimmy may not speak a word, and when he does it’s nearly unintelligible, almost spitfire, like an over pressurized can bursting open. He shouts to the kid who’s under arrest, “Get a lawyer!” Then he repeats himself. Get yourself a lawyer.

It’s tempting to draw parallels between these flash-forward teasers and each accompanying season’s overall plot, but little can be said beyond the show’s obvious foreshadowing: Jimmy’s actions carry inevitable repercussions (I’ll touch more on these flash-forwards later).

With the subject of consequences in mind, one of the most fulfilling moments of the show involved an air force captain whom he had conned in season two. The captain confronts Jimmy at his office demanding a TV advertisement be removed. A shouting match erupts. The captain calls him a liar. Jimmy tries to talk the problem away and offers him coffee, but Jimmy concedes soon as he finds himself saying things eerily mirroring what he might say to his brother, Chuck. 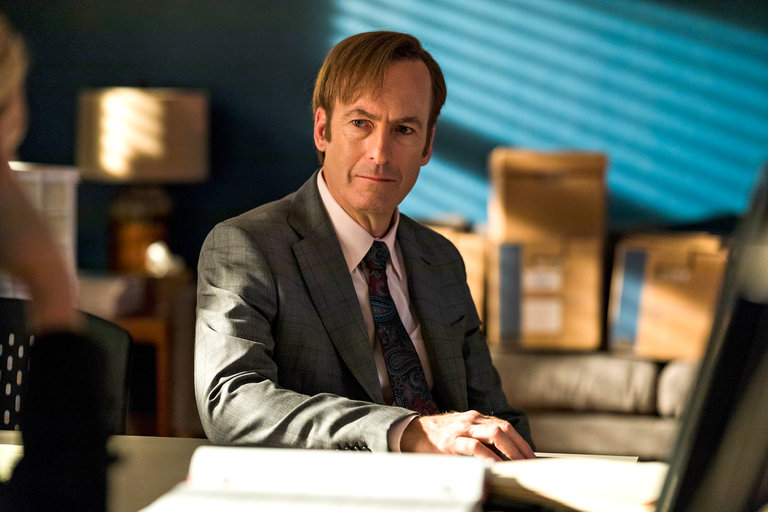 Chuck is the linchpin of Better Call Saul. He not only holds everything together but he’s just as much the wedge in Jimmy’s gears or the stake in the center of Jimmy’s chest. Chuck is not even in the room and he still manages to worm his way into Jimmy’s conscience. Then the air force captain says, “Guys like you, you think you’re so damn smart. And you think you don’t have to play straight with anybody. The wheel is gonna turn. It always does.”
The expression on Jimmy’s face while hearing the captain speak (“The wheel is gonna turn”) is one of stubbornness, a far precursor to the expression on his face during the black and white flash-forward teasers where he’s bitterly pouting, almost frozen in a perpetual grimace. He hears what the air force captain is saying but he doesn’t want to believe it, and in the flash-forwards he still doesn’t want to believe this is how everything turns out. It doesn’t seem fair.

So why is that the logical thought? It doesn’t seem fair. It could be argued that while Chuck is the show’s linchpin, Kim Wexler is the show’s conscience. She does not agree with how Jimmy works but she does care for him. She believes she knows that his heart guides him, even if it is in the wrong place. The opposite could be said for Chuck, who seems to realize in brief, almost invisible, moments, how much he regrets his own instinct to follow the law. Chuck will put the law over everything, whereas Jimmy will follow his heart. In Jimmy’s mind, the heart dictates what is right and wrong above all else. Couldn’t this be a decent argument for why Jimmy seems to attract so many more friends or reluctant allies than his brother? Season two revealed, through flashbacks, how even Chuck’s own wife enjoyed Jimmy’s company and even his jokes above her husband’s. And really, just as a side-note rant: a prequel show having flashbacks (a “past-past”) is almost a spin-off within a spinoff—how far back can the writers go to cherry pick moral allegories between characters who, for most of, we already know their fates? I’m not complaining, just curious about how the show’s writers are walking this tight-rope balancing act with how much they can influence the audience’s willingness to root for Jimmy. When does he become Saul Goodman, and will we be rooting for him then?

Are we rooting for Jimmy during the black and white sequences? He’s been stripped of his stage name, Saul, and his birth name, Jimmy. In the future-present his name is Gene. We don’t really know who Gene is, and neither does he. With no brother to care for, no Kim to reassure and inspire, and no clients to work with, all he has left to do is make Cinnabon® pastries. While it’s tempting to draw parallels between these future-present sequences and the show’s more colorful past-present, it’s more likely that a larger significance is emerging, just peeking above the surface. In the same way that this episode told both Jimmy’s story and Mike’s story without either of them interacting, the flash-forward teasers are telling an entirely different story. Mike is not Jimmy but he is somehow affected by him. Gene is not Jimmy but he is obviously affected by him.

So this last point should be considered a prediction: the black and white sequences will eventually dominate the show, perhaps, even for a whole season, say, all of season five or its latter half. Maybe we’ll get to see Gene in color for once. Maybe he’ll throw off his apron and go find Kim (whatever happens to her—I hope she’s still alive by then—in these three seasons. Rhea Seehorn gives some of the best performances out of any television show in recent memory). Whatever Gene decides to do, it’s obvious at the beginning of this third season that he’s not done fighting. He shouts at the kid being arrested in the mall, “Get a lawyer!” And he knows that lawyer should be him, because there’s no one better for the job, no one with half as much heart as he.

– I didn’t say shit about Mike. And Jonathan Banks, as always, says so much with so little in his scenes. He’s fun as hell to watch. What else is there to say? The show does what it does and enjoys taking its time, showing how thorough and sharp Mike is. That final shot of him tailing whoever has been tracking his car’s movements is the best way the episode could have ended. Likely, it will lead him to Gus Fring, the man who reserves the sole pleasure of killing Don Salamanca before anyone else—a decision that results in Gus’ demise—in fact, just imagine if he had allowed Mike to kill Salamanca at the end of season two. Walter White may not have been a problem. It’s a fun thing to think about, and I’m hoping there is more to these sequences beyond legitimizing events during Breaking Bad.

– I liked how the show answered Chuck’s recording of Jimmy being admissible in court. That made sense, and it made things more interesting when he said to Howard that he has other plans (likely, he’ll use it to back Jimmy into a corner later like emotional blackmail). But I didn’t like how Ernesto accidentally heard the recording. It felt a bit too easy on the writer’s part. Oh, oops—you didn’t hear that! We already know that Ernesto lied to protect Jimmy because he’s his friend, but my feelings on this would be resolved if, during a trial at the season’s end, Ernesto had to tell the truth before a judge and jury. It would vindicate Chuck who holds the law so sacred above all else. Because, let’s face it, the world demands justice and doesn’t reward wrongdoers just because they have good hearts. The law’s the law, yeah?