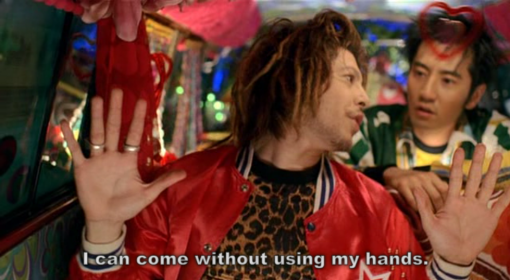 Whether it be down to the strange humour, the abundance of tentacle porn or whatever the hell this is, Japanese entertainment has a reputation for weirdness. It can create something of a cultural barrier at times, but when it’s fully embraced by both parties magical things happen. Survive Style 5+ is batshit crazy and that’s what makes it brilliant. Directed by advertising veteran Gen Sekiguchi, the film consists of 5 utterly bizarre, barely connected stories that intertwine as the film progresses. One follows a man who repeatedly kills and disposes of his wife, only for her to rise from the grave and attack him, another involves a salary-man falling victim to a botched hypnotism stunt that leaves him believing he’s a bird, there’s the three teenage boys that run around burgling houses whilst one of them struggles to conceal his burning love for the other, the jaded commercial director who can’t catch a break and a high priced, existential assassin played by Vinnie Jones. Yep, Vinnie Jones, because of reasons.

The narrative flits back and fourth between these 5 tales seemingly at random amidst a sea of strange, gorgeous production design. The sets are an amazing, ocular assault of primary colours, unusual props and weird costumes. The resurrection-happy wife (the stunning Reika Hashimoto) sports a new, elaborate outfit each time she reappears and the inexplicably sexually charged hypnotism show ‘Viva Friends’ is an assault on the senses. It’d be easy for a film like this to end up being a triumph of style over substance but there’s an engaging, emotional undercurrent. You care about these people and their strange predicaments. The bird-man’s son at one stage declares that he’s proud of his father and wants to help him embrace his new avian identity, it’s actually brought me close to tears on previous viewings. It’s one of those films you just have to roll with, literally the first thing that happens in it is the fourth wall being broken and it doesn’t get any more lucid from there, but if you can accept the weirdness, you’ll learn to love it.

This is going to be interesting. Everything I love about this film I dare not divulge because it’s all very spoilery. I’m going to have to tread very lightly. Takashi Miike is one of the most prolific directors in cinematic history, he’s been active for around 20 years and already has hundreds of directing credits that wildly vary in style and tone, from the mooted drama of The Bird People in China to the chilling tension of One Missed Call to the ‘WHAT FRESH HELL IS THIS’ of Happiness of the Katakuris. Then there’s Audition, what I will say about it is that it will stay with you long, long after you’ve seen it.

If it were up to me, Audition would be sold in a black, picture-less DVD case with only a vague blurb on the back and no animated menu. The best way to watch it is almost absolutely, 100% cold. The story is centered around a widower who is talked into using the pretense of a film audition to essentially canvas for a new wife. He’s a nice enough person but there’s no getting away from the moral murk surrounding such a scheme. That’s all I’m saying, any more would be too much. Those who have seen it will doubtlessly agree. It’s a powerful, evocative exploration of intimacy, attachment and the many different shades of love and it’s a bona fide masterpiece.