10 Best HBO Shows of All Time

The best shows from the network of bad language, casual nudity, and a lot of violence. 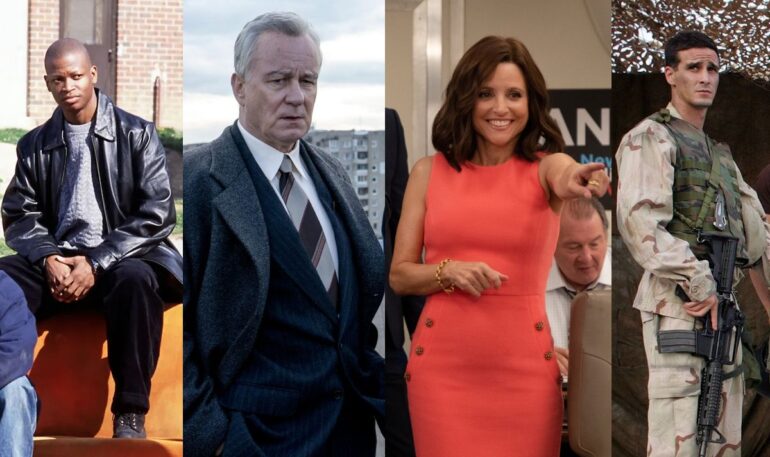 Best HBO shows of all time

The tale of history’s worst nuclear accident is, on balance, scarier than any of TV’s great villains. Defeating a bad guy is straightforward – but dealing with a nuclear power plant catching alight? What’s your plan then? As it turns out, the Soviet Union in the early ‘80s didn’t really know either.

For much of its runtime, Chernobyl isn’t simply depicting a disaster, but is a straight-out work of horror, where even without a knife-wielding monster you’ll hide behind the settee and scream at the people onscreen to turn the lights on.

Even on the fringes of the main accident, proceedings are frighteningly intense. And even when the disaster itself is over, when in a different work the earth would have stopped shaking and everyone could get on with their lives, the consequences ripple out further than you might have dared to imagine.

The famously foul-mouthed story of a frontier town’s growth from a mining outpost to something resembling an actual town, Deadwood offers a gritty look at the old west. Instead of a tale where the white hats shoot the black hats and then everyone plays the banjo, Deadwood is more realistic and nuanced, exploring what it is that makes groups of people band together. In this case, money.

Deadwood uses a florid, old-timey, rootin’-tootin’ period-appropriate style of dialogue – except for all that swearing. As Charlie Brooker once noted, it wouldn’t have been the same if they were exclaiming ‘consarn it’ and ‘tarnation’. Because of this, and you’ll find this in many of the best HBO shows, this is not a show where half an ear is enough, you need to sit down and pay attention. But if you do, you’ll find it well worth it.

3. Flight Of The Conchords

Two kiwis in New York, Bret McKenzie and Jemaine Clement, try to break into the diamond-studded stardom of the folk music scene. Each episode is underscored by at least one of their heartfelt songs, be it a wacka-wacka love ballad (“It’s Business Time”) or bringing in the band’s cold, hard gangsta rap personae (“Hiphopopotamus vs. Rhymenoceros”).

Much like the voiceovers from Peep Show (another show, incidentally, about two men bumbling around a city far larger than it needs to be) the songs provide a window into Bret and Jemaine’s innermost thoughts. Their grandiose artistic goals are checked at every turn by humdrum realities – not even in a cringe way, it’s too gentle for that, but nonetheless in a way which is incredibly funny.

Generation Kill was based on a book whose author was embedded with a frontline marine unit, and it shows – not least because ‘the reporter’ is a minor character in the show, silently taking it all in. Despite that rough’n’tough name, and being set exclusively in the hot zone of Iraq, Generation Kill is, surprisingly, far from action-packed. In this it’s one of the more honest depictions of war there’s ever been. There’s a great deal of being in transit, and even more sitting around, waiting.

The people who make up the Generation Kill of the title, angry, angry young men practically frothing at the mouth to fire upon an enemy soldier, are largely blameless. The show is a feature-length version of Murphy’s Law, in which anything that can go wrong, will go wrong, a satire of military misadventure right up there with classics like Apocalypse Now or Full Metal Jacket.

The ‘emerald city’ wing of the Oswald State Correctional Facility is meant to be a place of rehabilitation, where hardened criminals are reconstructed into functioning members of society. Instead it’s a Hobbesian jungle where the various gangs are in a constant struggle for power against each other, the wardens, and themselves.

Unremittingly graphic, Oz was a big part of why HBO garnered its no-holds-barred reputation – but its depiction of the seamier side of life allowed it to deal with more complex issues, not least the racial and religious tensions between the gangs, which before Oz television simply wouldn’t touch. The pen might be a confined, shut-in place, but Oz presents a cast and story more expansive in scope and scale than most dramas, let alone prison ones.

Lesser known compared to some of the other best HBO shows, but no less influential for it, The Larry Sanders Show came to be when standup Garry Shandling was offered a talk show but instead made “a show about a talk show”. The oversaturated format of gently fluffing whatever celebrity they can scrounge up that week is one that’s always been ripe for mockery, and Shandling dissects it ruthlessly.

The Larry Sanders Show would merit its place among the best HBO shows for its legacy alone. The entire broad genre of mock-candid behind-the-scenes shows, starting with the ubiquitous The Office, owes not a little to Shandling’s approach here. His joke host cringes and fumbles his way through each interview, and his guests (real celebrities who are being excellent sports in playing exaggerated versions of themselves) respond in kind.

A bleak, harrowing stroll through the modern justice system is meat and veg for HBO. It cut its teeth with prestige crime dramas – with The Night Of, it puts the arrest and trial in centre frame. Is the man on trial guilty or not? That’s not even really the question, since through each lingering shot of a completely grey prisonscape, we must ask ourselves: even if he was guilty, would he deserve this?

The Night Of is a show about constant, underlying tension – primarily the tension over what, exactly, the justice system will do to Riz Ahmed, who does a manful job playing a vulnerable college student. We see the trial spiral out from this centre, impacting on everything around it, but never losing sight of the core. Even though it only lasted for one tragically brief season, it’s easily one of HBO’s best shows.

The Sopranos began as a kind of loose TV spinoff of Martin Scorsese’s Goodfellas (originally it would have been Ray Liotta instead of James Gandolfini as the lead – imagine that). In short order it ended up putting HBO on the map, and welcoming in the era of the hour-long prestige TV drama. If you’re a fan of any entry on this list, in a roundabout way you have The Sopranos to thank for it.

The core of the show could be any man’s mid-life crisis – he can’t live up to his father’s legacy, his kids are out of control, he’s having an affair – except in this case, the man in question is a New Jersey mob boss. You might say he has problems with his family, and problems with his Family.

The Sopranos is the show that made it okay to root for the bad guy, and that’s due in no small part to Gandolfini’s performance as Tony Soprano, a fat, balding antihero you simply couldn’t take your eyes off, a villain-protagonist for the ages.

The Wire isn’t just one of the best HBO shows ever, it’s also the undisputed high-water mark for police procedurals. It can take a simple thing like two detectives going over the scene of a murder using only the word ‘fuck’, and make it an art form. Usually, though, investigations are more complicated than that, and by the time the show’s over you’ll have a decent grounding in the legal grounds for wiretapping someone.

Veep is that rarest of things – an American adaptation of a British show that didn’t turn out dogshit awful. And it managed this in spite of doing away with the Malcolm Tucker role from the original, who could only remain a dark horse for about three episodes before taking centre stage through sheer force of personality. Without Peter Capaldi at his most profane, what was it left with? An unsentimental look into the corridors of power which was still characterised by a lot of swearing, that’s what.

The grand central joke is how the vice-president, despite ostensibly being number two in government, basically has no power and means nothing. Julia Louis-Dreyfus’s hapless vice-president tries gamely to ignore these stumbling blocks, aided by the pond-life that any position of power accumulates, most of whom are mainly trying to cover their own necks.

Happy to toy with the issues of the day without ever coming right out and saying ‘look, it’s a reference to this’, Veep is both one of the best political comedies there’s ever been, and one of the best HBO shows, period.