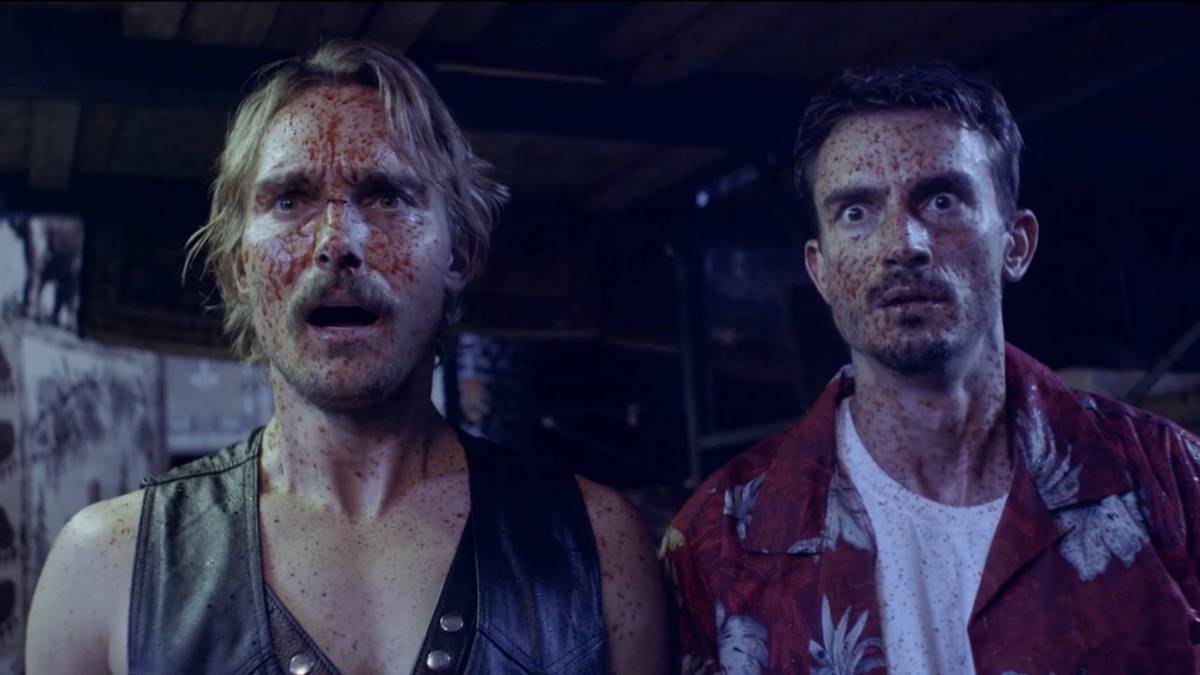 Recently released on VOD, A Beginner’s Guide to Snuff (written by Cory Knauf, Adam Weis, and Mitchell Altieri and directed by Altieri) is a gory horror-comedy that’s not as hilarious as it probably wants to be, but makes for an entertaining enough diversion as long as your expectations for this kind of thing aren’t incredibly high.

Dimwitted brothers Dresden (Joey Kern) and Dominic (Luke Edwards) are aspiring actors who aren’t getting very many gigs. They want to stay in LA instead of returning home as failures. Luckily, an opportunity presents itself in the form of a horror film contest. Dresden, being the “brains” of the operation decides that the brothers will enter the contest. They’ll make a found footage horror film, a fake snuff film.

To make the movie seem more authentic, they’ll kidnap aspiring actress Jennifer (Bree Williamson) and make her think she’s in an actual snuff film, not telling her the whole thing was a setup until they’re finished shooting. All this goes wrong, as you might expect, and Jennifer ends up turning the tables on the brothers.

The movie’s tone is inconsistent, but this is clearly intentional, so I’m fine with it. The beginning is straight comedy, then there’s a bit of dramatic tension as the boys begin their fake snuff film, then the final third is full-on horror-comedy with plenty of gore. It’s kind of neat that the movie takes the air out of found footage films a bit and also pokes friendly fun at experimental films. It’s a playful movie, and a bit of an experiment itself. Though the central conceit, the absolute cluelessness of the brothers, wears a bit thin over time, A Beginner’s Guide to Snuff will keep you laughing, as long as you like your humor dark and depraved. Well, okay, so now that I think of it, this movie was pretty much made for myself and my weirdo ilk.

Just a bit of a side note: If you decide to watch this movie, I hope you dig guys in whitey-tighties and bondage outfits, because there’s a lot of that here.

Part of the fun of A Beginner’s Guide to Snuff is that the audience is in on the joke. We’re laughing at, not with, these two dolts from the first minute of the movie. It’s actually a very cathartic experience, this feeling of superiority you get watching idiots do something terrible and getting their comeuppance. Sure, there’s absolutely no nuance or subtext, and the movie is relentlessly in-your-face, but I’ll take the catharsis.

The end of the movie goes totally off the rails with the gore and silliness, and your results may vary as far as your enjoyment of these things go. It gets pretty dark, but it’s not nihilistic. I like the core idea a lot. The execution was a bit muddled, but there are some neat surprises to make A Beginner’s Guide to Snuff a fun enough diversion.