Anyone who has ever wanted to smash big chunks of (heavy) metal cathedrals together will love Battlefleet Gothic: Armada II. 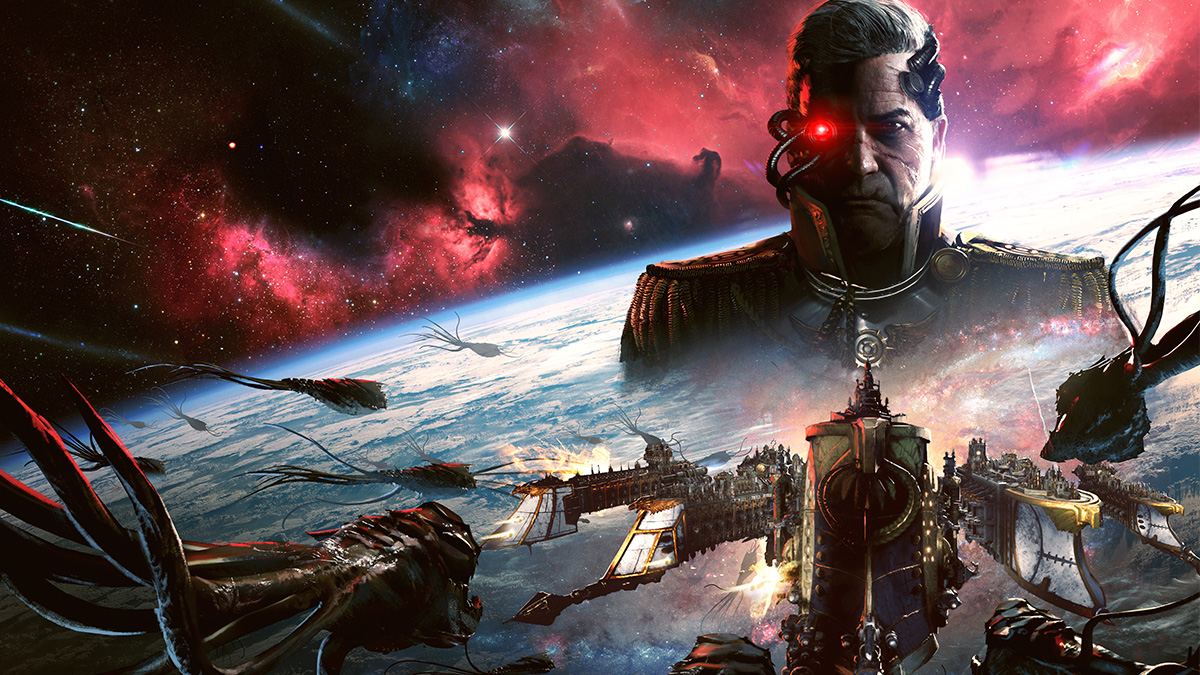 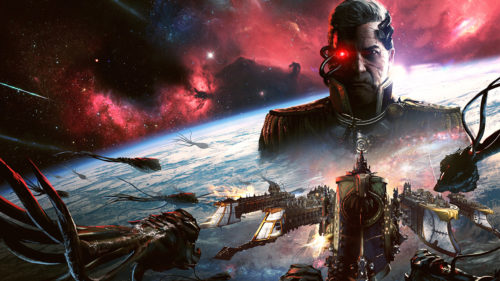 The sequel to 2016’s Battlefleet Gothic: Armada delivers a true sequel in pretty much every way imaginable. It’s bigger, more polished and has a much more involved and cohesive story than last time around. Above all, though, it delivers exactly the type of action, gravitas, and nonsense you come to the Warhammer 40,000 universe for.

Naval strategy games have for the longest time been dominated by ultra-realism. You mostly play them via menus and you seldom get to take part in, let alone see any of the action. We who only wanted to see some big hunks of metal (or wood) blast broadsides at each other were, sadly, out of luck. That is why Tindalos’ 2016 title Battlefleet Gothic: Armada felt so fresh and needed. It not only gave us an excellent adaptation of the tabletop ruleset, but it also provided this type of visual and bombastic naval strategy game that I felt was so sorely missing. It also provided a narrative-driven campaign and a plethora of unique factions for us to discover and play around with. Now the much-anticipated sequel is finally here and while most things look familiar on the surface, there are a bunch of great improvements under the hood for fans of the first game. 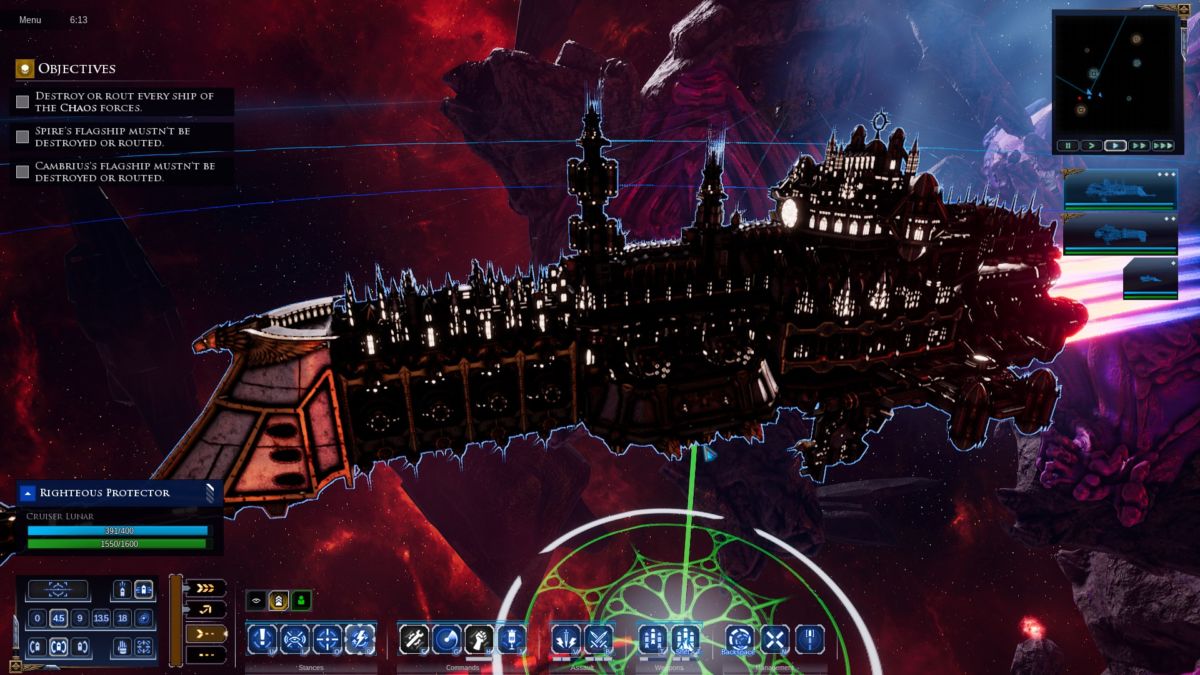 It’s no exaggeration when I say that every single aspect of this game is either a gameplay improvement or an expansion in scope compared to the last time around. The battles are bigger, gameplay has been tweaked and improved and the story more cohesive and connected to the source material.

While the game is set in space, it plays just as if you were on the high seas in a ridiculously diverse Napoleonic war. Engagements are mostly kept to a pretty short distance and maneuvering your hulking ships so that broadsides and tactical weaponry comes to bear is the name of the game. All factions have their own specialties, strengths, and weaknesses. The Imperials have a bunch of torpedoes and use afterburners to make sharp turns for aiming or avoiding dangers. On the other hand, the Necrons lack these nifty afterburners but can instead teleport their ridiculously sturdy ships for short distances. These kinds of differences hold true for all the factions that are represented, and there are a lot of them. All 12 from the tabletop game are in this game from the get-go. While some are variants of each other, like Empire of Man having the Imperial Navy, Adeptus Astartes, and Adeptus Mechanicus being separate factions, there is still plenty of variation and unique tactics to try out. It especially helps the campaign stay fresh as you need to adopt different strategies and tactics when dealing with different factions. It’s a completely different thing facing Eldar compared to Chaos forces. 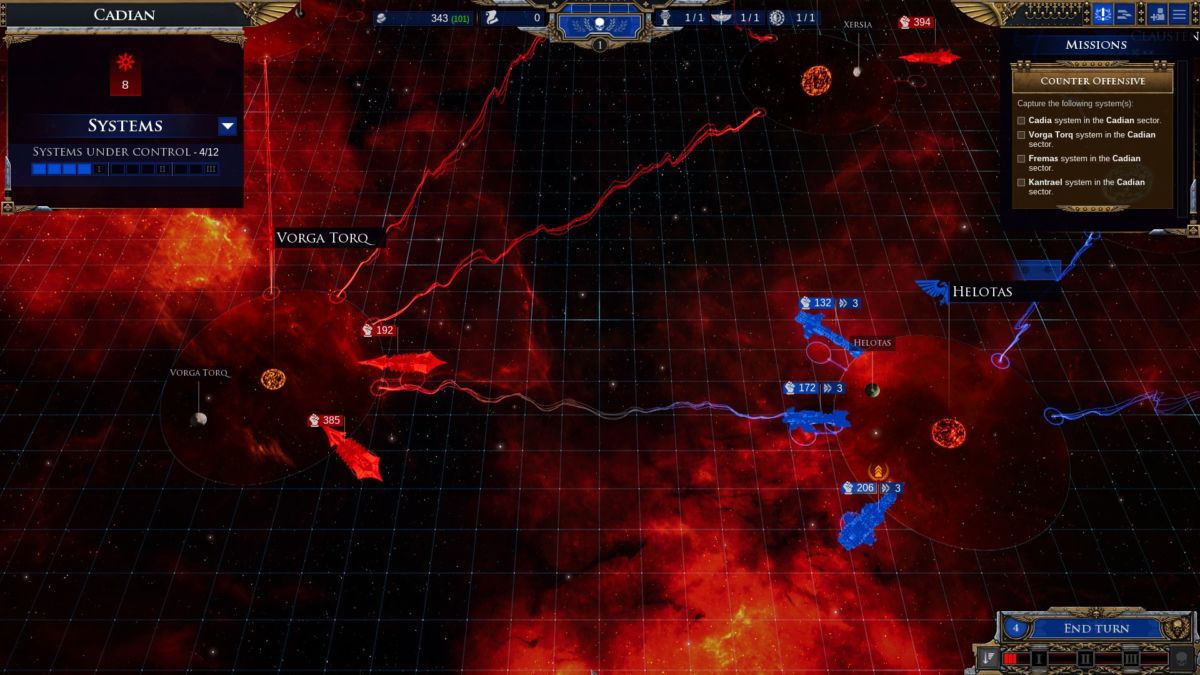 Speaking of which, the campaign has been greatly overhauled this time around. While the first game was pretty linear with some minor branching paths and side missions, Armada II gives you three dynamic campaigns to play around with. These campaigns let you move around fleets on a strategic map in order to conquer systems, defend them, and build up your forces. It gives the campaigns a whole lot more tactical variety as you can assemble your forces to a much greater extent than you ever could before. It’s moderately challenging and, if you’re not careful, you can actually mess up enough to make continuing a campaign impossible (speaking from experience). While most of the campaign is well-executed and a joy to play through, some missions are repeated a bit often and the back half of the campaign can have your forces snowball to such an extent that encounters become trivial. Familiar players should play on medium and above to mitigate this somewhat.

The story actually does a good job of connecting to the previous game, even though they are separated by almost a thousand years in the fiction. Admiral Spire is back after being lost in warpspace at the end of the last game and it feels good taking control of him once more. He is not the only one to make a comeback either; a few other familiar faces that have been able to survive over the millennia cross paths with you. It lends a much more personal feel to all the bombast and epicness in the story. It’s been a rough thousand years since the first game and Abbadon is back at it again, obliterating the fortress planet Cadia in the opening salvo of his 13th black crusade. For as many Warhammer games that are released nowadays, surprisingly few of them tie closely and directly into current events (or even reference them). The fall of Cadia was a shocking event in the latest edition of the tabletop ruleset, which set some big changes into motion in this grimdark universe. Throughout the story, you will encounter some heavy characters (including a blue-clad Astartes grandpappy of some importance) and important events. Overall, it is well presented and fill in a lot of lore for those uninitiated. The dialogue is ridiculously exaggerated and has that constipated seriousness you expect from a game set in this universe, but, for the most part, it is well-acted and delivers 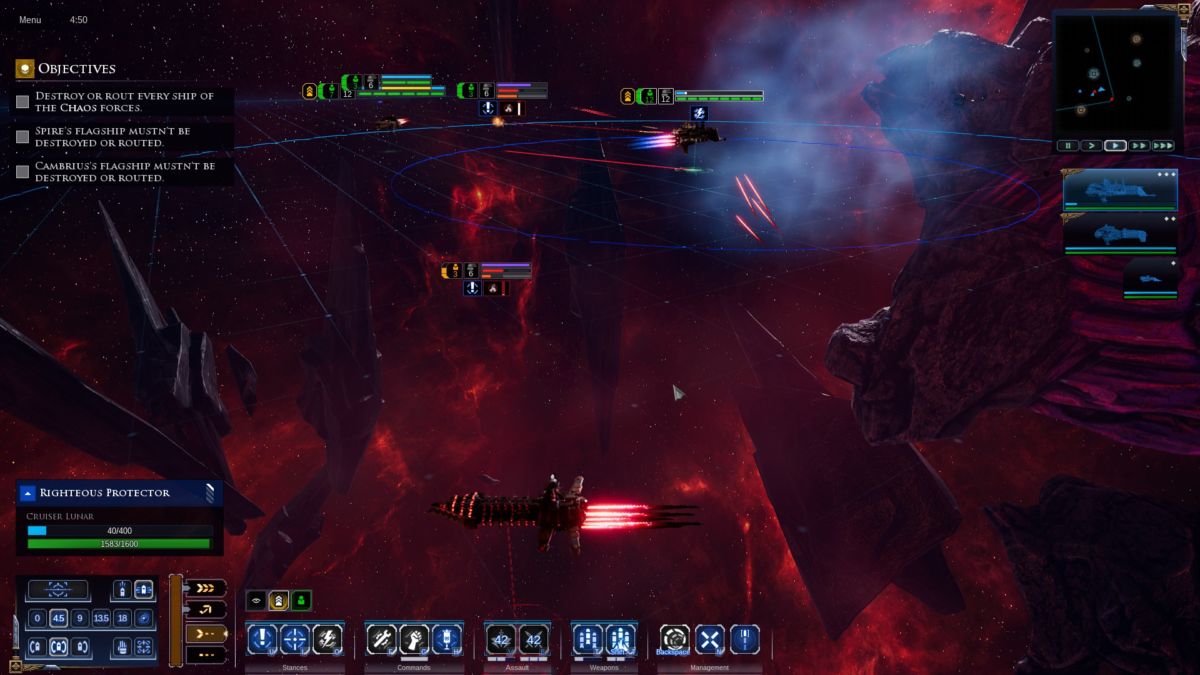 Technically, Armada II looks sharper and has some gorgeous new effects to offer — seeing a full broadside erupt from your capital ships is a joy to see. But it is very clear that we are still dealing with pretty much the same graphics engine and tech as last time around. However, Armada II is much better optimized and can offer larger engagements than last time and load times have been improved by a great deal. The detailed graphics also make the ships feel a lot more distinct and the factions really have a unique look and style to them. Ork ships are floating hunks of debris that someone has slapped a bunch of cannons and engines onto. Eldar ships look sleek and dainty like they might break any moment, which they do. And of course, our favorite space fascists, the Imperials float around in space-cathedrals full of skulls that serve no strategic or practical purpose whatsoever. The sound and music also play a great part in selling the universe: the cannons sound like big, angry gunpowder weapons and when you ram into a ship, it sounds crunchy and painful.

Battlefleet Gothic: Armada II is a very impressive game that improves upon almost all aspects of the first game. Were it not for the campaign plateauing in the back half and some overuse of mission types, it could have been the perfect strategy game. As it is, $40 will give you a great and expansive RTS with a surprisingly gripping storyline with developers Tindalos already promising some pretty interesting updates like co-op and even bigger engagements down the line.

Verdict
Battlefleet Gothic: Armada II is a beautiful and ridiculous space opera that delivers on pretty much every front. Anyone who has ever wanted to smash big chunks of (heavy) metal cathedrals at each other will love this game.
8