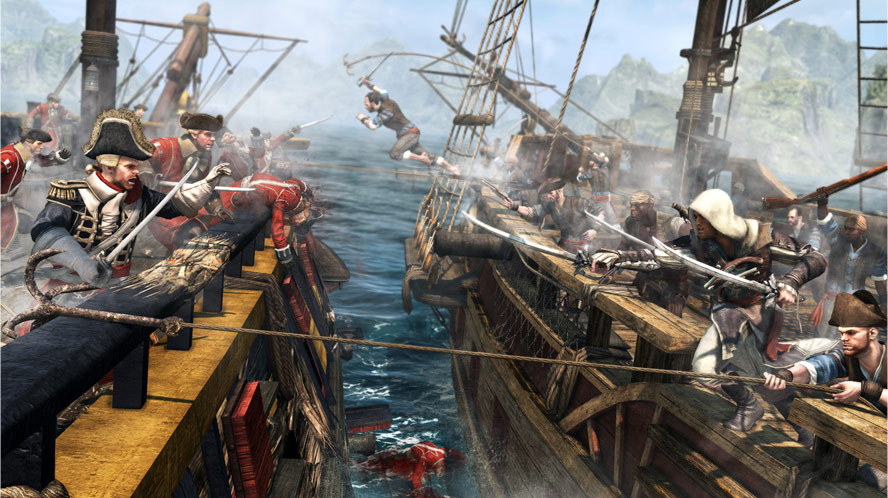 It seems the only way to be a pirate these days is to download a dodgy cam rip off of the Internet. On November 22 Ubisoft changed all that. The latest instalment in the Assassin’s Creed franchise is Assassin’s Creed IV: Black Flag, it was the game everyone hoped for after the naval combat was the single most enjoyable parts of ACIII. Any pirate game that has ever been attempted has stumbled short of even playable but now, now you’ve got the closest experience to being an actual pirate bar grabbing an AK-47 and running off to Somalia.

Although retaining the usual Assassin’s Creed mechanics, they have taken out the lock-on (using LT/L2) and have replaced it with free aim for use with the new multi-shot flintlock pistols. This I’ve found has been a massive downfall in the series – not being able to lock on means you cannot concentrate on any chosen person, often resulting in not having a smooth experience. The free aim is needed but it should have been mapped to another button. The free running movement often takes a mind of its own resulting in collecting shanties a tad tedious and frustrating. Those are the downsides to this game, which are far outweighed by the positives.The moment you open the map you realise just how much there is to do, and when you close that map, and go to do these things you realise just how beautiful this digital Caribbean is. The clouds in the sky look like they’ve been ripped from real life, the gleam of the sun on the open seas so perfectly recreated and once you’ve acquired your own vessel the world is your oyster. And hey, if sea sickness kicks in then get yourself to land for the plethora of activities you can take part in.

There’s plenty of collectibles and side activities to busy yourself with, sea shanties, chests, buried treasure and their maps, classic style assassinations, Mayan stelae and the four part mini mission Templar hunts. All of these activities can keep you entertained for a fair amount of time and are rewarded with neat little extras like weapon sets and outfits. The nice little addition of forts to help make the map visible proves to make you work to find what you’re looking for, because woe betide anyone trying to defeat a fort that their ship isn’t quite ready for.

Another of the new features to this game is the underwater exploration. It’s thoroughly enjoyable swimming around the depths hunting for treasures and exploring shipwrecks and to add further challenge to this, a multitude of underwater enemies have been added such as eels, jellyfish and of course, sharks. There’s nothing quite like swimming for your life to the nearest hiding spot seeing those razor sharp teeth stalking closer and closer. However fun this is, it’s limited to the few diving bell locations placed on the map.

Although you unlock your own hideout town, your ship, the Jackdaw, is your home. You progressively improve your ship by collecting resources from other ships  for selling and using by boarding them and this is such a fun activity that I found myself lost in for hours at a time.

The sea combat is fantastic with smoke everywhere, cannon balls flying overhead whilst competing with often ferocious seas to overpower a fleet of ships; only to see a pirate hunter Man O’ War appear on the horizon and realising you need to time your attack perfectly because you’ve wasted all your resources taking out a bunch of Spanish frigates.The story for this game was deep and emotional compared to its predecessor and you find yourself feeling for the characters, although if you didn’t pay attention for a moment you’d find yourself lost as to what was going on. The modern day first person parts of this game didn’t fit as it’s not a first person game but the story it covered bridging the last two games gives you a tiny bit of closure on the end of Desmond’s story and opens up a lot of topics about the franchise’s future.

My verdict on this game, even if you aren’t an Assassins Creed fan, is it’s a beautiful hearty pirate experience that visually fulfils its goals to create a swashbuckling adventure full of life and adventure. The in-game economy is very basic and the general responsiveness of the game seems buggy a lot of the time but if you’ve ever stopped and wondered just what piracy is all about, this game is for you. And if piracy and killing stuff ain’t your thing then it’s worth playing through just for Anne Bonny’s smooth jingle over the ending of the story.