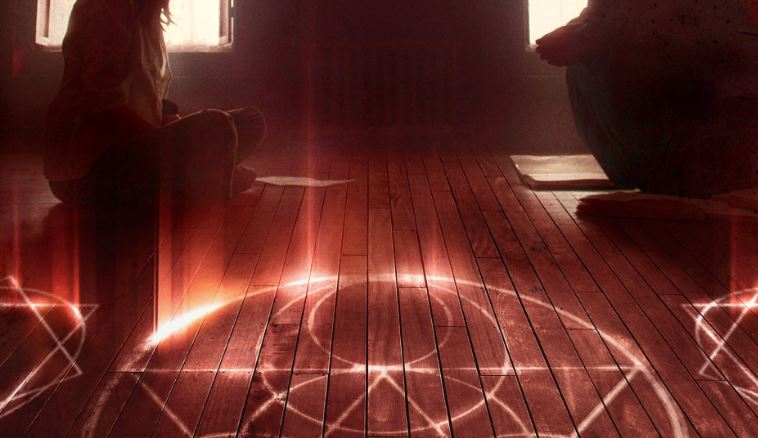 A Dark Song follows Sophia, a grieving woman whose young son was taken from her, and occultist Joseph, who will perform a gruelling ritual to allow her to speak to him again. Although Joseph is offering her the one thing she wants, he is a troubled man with a short-temper, and Sophia becomes concerned that this ritual may not even work at all.

Written and directed by Liam Gavin, this is one of the more impressive and confident debuts I have seen and a tantalising start to his career. Gavin’s direction betrays his boldness with its perfectionism and attention to detail, as he deliberately keeps his audience in the dark in terms of the supernatural ambiguity of the narrative. There are no jump scares, indulgent gore or shaky camerawork that a lot of horror films use to pretend that they’re actually scary. A Dark Song breaks with the modern horror cliches and relies on his masterfully created atmosphere to set a truly terrifying experience.

The script is brilliant as well, with the incredible depth given to the two characters providing a strong emotional core, adding an extra dynamic to the already palpable sense of dread. The dialogue is authentic and often quite insightful, making the audience feel like we are flies on the wall, observing these two very real people dabble with something potentially dangerous. Gavin smartly keeps the audience unaware of the purpose of a lot of these strange rituals; we learn as Sophia learns, and are just as immersed, afraid, and perplexed as she is. The most effective thing, though, is that these two characters are, essentially, very normal. Joseph isn’t an eccentric lunatic and Sophia isn’t gullible and unreasonably headstrong like a lot of female characters in horror films are. They are both just human beings struggling with life’s problems and A Dark Song is all the more effective for it as we experience the proceedings through their eyes.

The production design in this is superb, with every room in the house dripping with menace and the bleak and groggy exteriors of the surrounding countryside ensuring a intensely claustrophobic atmosphere. The restrained use of the religious iconography and paraphernalia is perfectly captured by the subtle and controlled camerawork that uses extended still-shots rather than kinetic manoeuvring. The sound design is also perfect, with Ray Harman’s ominous soundtrack complementing the spine-chilling visuals and using complete silence when it counts, making for some horrifically tense sequences.

Although the relationship between Sophia and Joseph is one of the most compelling aspects of the film, this is very much Sophia’s journey, as it’s her suffering this ritual is supposed to be alleviating. Forced to submit to every demand Joseph throws at her and exploited at every opportunity, these cruel commands coupled with the initial uneventfulness of the ritual leaves her spiritually and physically broken, all the more easy for Joseph to further take advantage of her. Actress Catherine Walker portrays this role with bruising vulnerability and she is an emotional powerhouse. Steve Oram as Joseph Solomon is the stern, abrasive, outspoken opposite to Sophia’s quiet sensitivity. He oozes a hidden bitterness that gives A Dark Song yet another vicious edge. His performance is energetic and confrontational, but never exaggerated. It’s thanks to both of these fantastic performances that make sure the film remains authentic and natural.

A Dark Song is a disturbing, clever, nail-bitingly tense horror movie that feels like it was made by a veteran. Passion bleeds from every frame, and it’s not only a masterwork of genre craftsmanship but also of sorrowful storytelling. Utterly unique and daring, you won’t find another movie that uses religious and supernatural themes quite like this one. Without hyperbole, I’m willing to say that this was the most terrified I have been watching a movie in the last decade.

An absolutely petrifying, bone-chilling, hauntingly sinister horror movie with some of the most dreadful atmospheres I have ever experienced, A Dark Song is also one of the best movies I have seen in many years. The direction and craftsmanship is immaculate, the tense pacing elevates the claustrophobia, and the entire film is filled with striking imagery. This bizarre but audacious film deserves to go down as one of the most memorable pieces of cinema that the horror genre has produced in a long while.