Seriously, when is The Holiday Armadillo getting his own superhero movie? 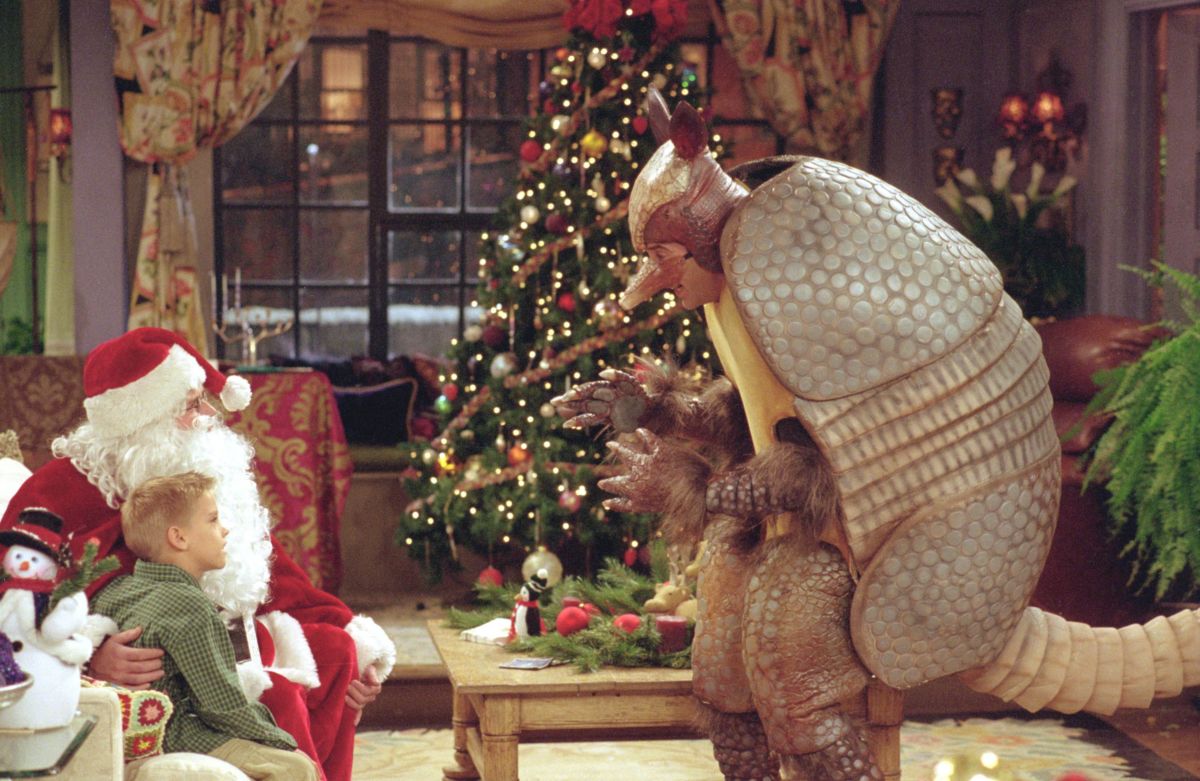 Whether you’re more inclined to invest time in a drama series or are in search of a few laughs, there’s one thing you can agree on: the holiday episode. They can either be ridiculously corny or offer something entirely unexpected. Some of the more memorable holiday episodes allow our characters to take a break from the unfolding arc of the season as we get a glimpse into how similar or different their holiday traditions are. These excellent holiday episodes each offer something unique and are worthy of recognition.

Even though Thanksgiving has come and gone, this episode is just too damn good to leave out. Initially airing on October 30, 1978, this season 1 episode focuses on Mr. Carlson’s determination to promote the WKRP radio station. He’s felt totally left out ever since Andy was brought on as the new program director, which inspires him to pay for a helicopter to toss live turkeys out of. Despite his good intentions, the event is a total disaster and it’s one of the most hilarious episodes of the series.

Long before 3rd Rock from the Sun, Robin Williams starred as an extraterrestrial named Mork in a Happy Days spinoff. As the title suggests, Mork is just learning of the holidays. Before long, his fear and confusion turn into childish excitement as he tries to find his loved ones the greatest presents he can offer. It’s an absolutely hilarious episode and has a heartwarming ending that sums up what makes Christmas so special.

Some of the most enjoyable and fun episodes of The X-Files are the “Monster-of-the-Week” ones. Even though I like season 5’s Christmas Carol, this is hands down the stand-out Christmas episode of the two. Originally airing on December 13, 1998, the episode is primarily set in a haunted house Fox convinces Dana to meet him at. By this point, fans have seen 5 seasons and a movie that only hint and tease at the characters’ feelings for one another. It’s almost as if though Lily Tomlin’s and Ed Asner’s characters are designed to confront agents Mulder and Scully about their relationship status.

Nearly 20 years after they were moving on up to the east side, Sherman Hemsley and Isabel Sanford of The Jeffersons fame guest-starred as Mr. Schott and Margaret Duffy; an unemployed toymaker and his conflicted partner and this episode’s antagonists. They carry out a plan to become rich by creating toy rats that spray a psychotropic drug, turning adults into greedy children. Written by Superman/Clark Kent himself, Dean Cain, it’s funny, uplifting and lighthearted enough to put even the Grinch in the holiday mood.

Fearnet, the now defunct cable network, will forever live on in my memory for one reason and one reason only: Holliston. For those of you not yet familiar with the series, it’s a curious amalgamation of comedy and horror based in the titular New England town. Adam Green leads a wonderfully dedicated ensemble cast of talented filmmakers and musicians in this semi-autobiographical reflection of an aspiring filmmaker’s journey in pursuit of success. Not entirely unlike the Friends Thanksgiving episode, Holliston’s Christmas special offers a hilarious look at how the characters all met. Jokes and gore gags aside, we’re also given a good mix of heartwarming and heartbreaking moments.

It’s always fun to see Jim Parsons play Sheldon Cooper in the hit CBS show, especially when his character gets to overreact to something the other characters may find to be trivial in comparison. In this specific episode, Sheldon dreads the inevitable moment in time when he has to exchange gifts with Penny, feeling pressured to find a gift that lives up to expectations, as well as making sure it’s scientifically balanced out with whatever he may receive, if at all possible.

Always fascinating for one reason or another is the ABC comedy series’ willingness to incorporate Christmas into episodes that should primarily if not entirely focus on the festivities of Hanukkah. Season 3’s more or less focused on A Christmas Story, but this episode is particularly memorable for its decision to discuss how awful yet entertaining the Star Wars Christmas special was/is. Meanwhile, due to a lack of Hanukkah themed anything, rival siblings Barry and Erica compete to create a new tune to replace the tired dreidel song.

8. Friends – “The One With the Holiday Armadillo” (Season 7)

In one of the better Christmas episodes of the series, Ross strives to bond with his son by teaching him why it’s important to learn about Hanukkah. Instead, Ben is more excited for Santa Claus to bring him gifts. Ross looks everywhere for a Santa Claus outfit, to no avail. He soon convinces himself that if he can’t find a red suit by Christmas Eve, he’ll let his son down. In a desperate attempt to save the day, he decides to create a memorable character that truly makes this a stand-out holiday episode.

Stuart hosts his annual New Year’s Eve costume party at his comic book shop. Determined to win the contest, Sheldon, Howard and Raj agree that including both Penny and her boyfriend would give them a great advantage. There’s some unrequited tension between Leonard and Penny, but the two are desperate to maintain a platonic friendship. Of course, hanging out at a comic book shop on New Year’s Eve isn’t Penny’s idea of fun, so our favorite gang of geeks work to encourage her to join their Justice League. It’s one of the funniest episodes of the 4th season and displays how valuable each cast member is as they almost effortlessly play off of one another.

Out of the nine picks provided, how many are you familiar with? If you plan on watching any, tell us which ones and why in the comments below.