Who knows where he'll swing by next. 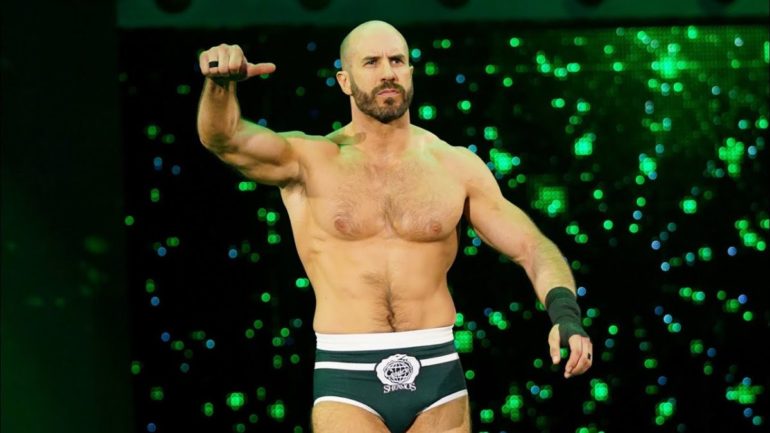 After eleven years working for WWE, Cesaro’s contract expired, and with barely a mention left the company. A beloved fan favourite for years, his name has become synonymous with being underappreciated and underrated by the WWE. Considering his lack of appearances since leaving the company, it could be understandable if some feel uncertain about what the big deal is, that surely if Cesaro was so good, he’d be a multiple World Champion?

Instead he was an underutilised critical favourite, who had brief pushes and then was dropped again. This article serves as a reminder for those people, that even despite the WWE’s seemingly best efforts to keep him buried, Cesaro’s talent was unquestionable. Here are the ten best matches from Cesaro in WWE. 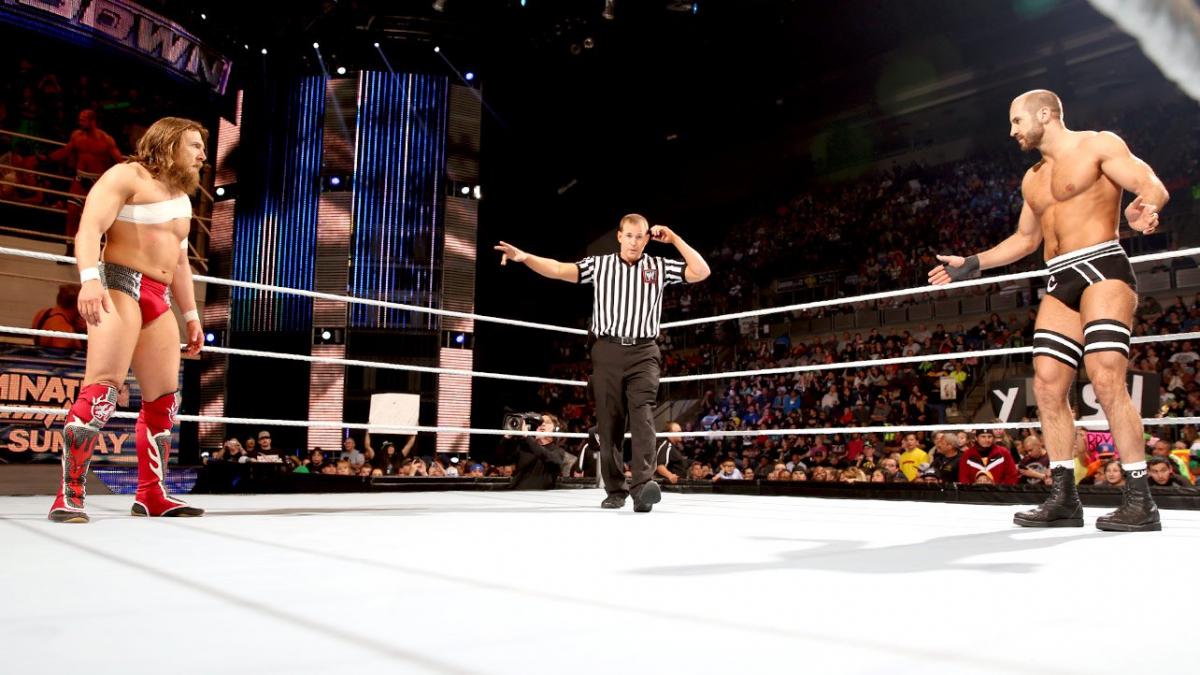 During the build-up to SummerSlam, where John Cena had chosen to defend his WWE Heavyweight Championship against Daniel Bryan, there were accusations from authority figures such as Vince McMahon and Brad Maddox that Bryan didn’t deserve the opportunity, Bryan was booked to face three opponents in one night. His first against Jack Swagger was quickly over, but the second was a nearly twenty minute blockbuster against Cesaro.

Having demonstrated his ability to mesh well with bigger and stronger wrestlers such as Takeshi Morishima, it’s unsurprising to see Cesaro and Bryan click together. Bryan takes the majority of a battering, with Cesaro’s range of suplexes and twenty-five(!) uppercuts in a row leaving Bryan in trouble.

Just as Cesaro seemed prime to hit his patented Gorilla Press Uppercut, known as Swiss Death, Bryan uses his intelligence to roll Cesaro into a Small Package for the three count. A hidden gem of a match on Raw.

Having debuted on SmackDown just over a year ago, Antonio Cesaro had already proven himself a capable wrestler, even winning his first (and eventually, only) singles title as United States Champion. Cesaro even defended his title in NXT before transitioning into a feud with Sami Zayn, who defeated Cesaro in Zayn’s debut in a major upset. This led to a rematch that occurred in July 2013 but wasn’t shown on television for another six weeks, during which word of mouth began to describe it as a match of the year contender. By the time fans could watch it, this match had been built up as a classic.

It didn’t disappoint, as Sami’s quick thinking earned him the first fall within a minute, and then Cesaro spent the rest of the match gradually getting more desperate. This builds to a vicious and overpowering Cesaro determined to destroy his challenger, tying up when Sami taps out. Cesaro’s immense strength is on display as Sami continues to get nearfalls, with the crowd on edge throughout.

In the end, Sami is overpowered and gets hit with a nasty Swiss Death Uppercut and a Neutralizer, earning Cesaro a hard earned victory. Cesaro had just featured in possibly the best match of the year. 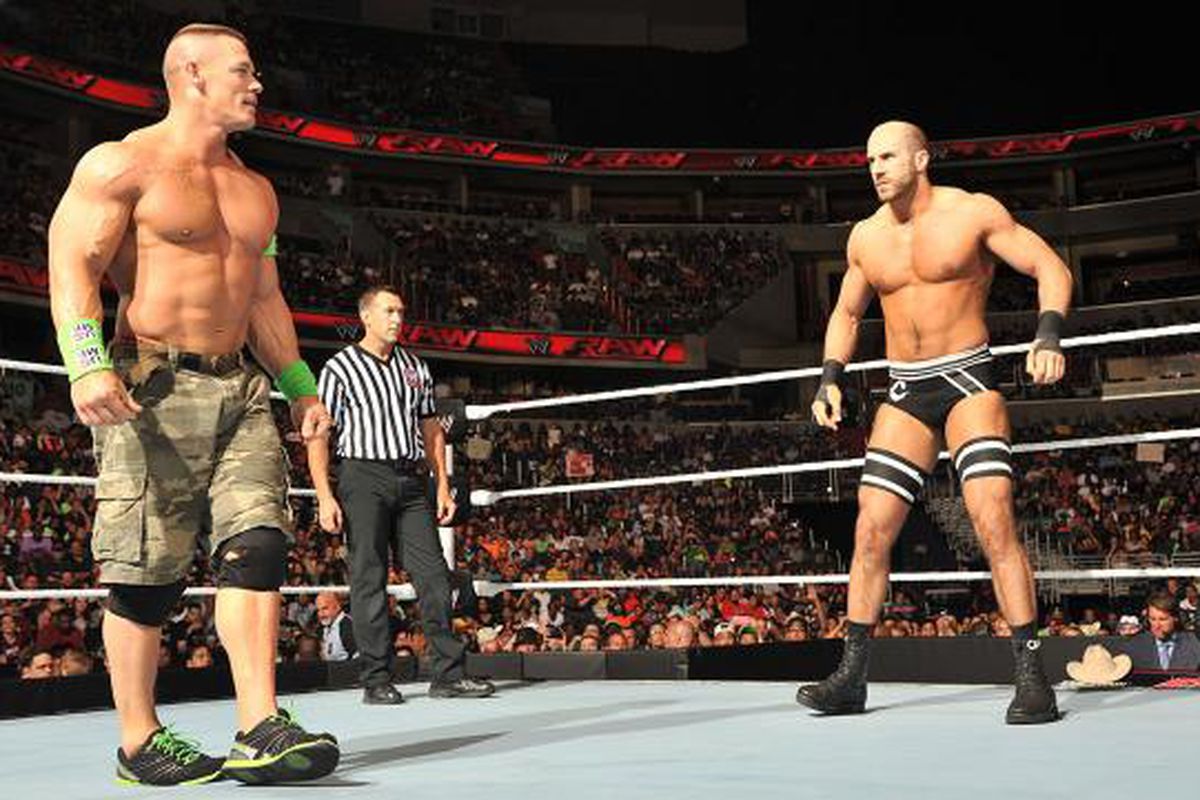 The most impressive moment saw Cesaro hit a deadlift suplex from the second rope to an apron-based Cena, earning a close two count. With another close two count from a Cesaro Swing, both men were frantic at the end to hit their big finisher, with Cena landing a massive Attitude Adjustment to get a three count.

Another TV episode, another cracking match from Cesaro.

The original version of NXT TakeOver, this was the first event to be streamed live on the WWE Network, and was headlined with Bo Dallas defending the NXT Championship in a Ladder Match against Adrian Neville. Also announced for this event was a rematch between Cesaro and Sami, the latter having admitted he couldn’t get over his loss in the supposed ‘best match’. When the show was over, everybody was discussing the Cesaro and Sami Zayn rematch.

This match was built not on Sami necessarily needing the victory but wanting to gain Cesaro’s respect. Cesaro utilised their history together to reverse Zayn’s patented Turnbuckle DDT with a massive Uppercut, or Sami’s Slingshot Moonsault with a Tilt-A-Whirl Backbreaker. Sami’s recent knee injury gave Cesaro a weakness to attack, including a classic Brock Lock, but Sami continued to battle back, at one point getting a nearfall from the Helluva Kick. After a physical battle for twenty plus minutes, it took a Discus Uppercut and a Jumping Neutralizer to finally put Zayn away.

However, the main story saw Cesaro hug Sami afterwards in the ultimate sign of respect.

In 2015, John Cena surprised many by winning the United States Championship from Rusev at WrestleMania and beginning one of the best reigns in its history, based on a weekly open challenge. With shock debuts such as Kevin Owens and Sami Zayn, as well as brilliant performances from unlikely opponents in Neville and Stardust, the open challenge became a weekly highlight. As the title gained more prestige and legitimacy, Cena appeared in a main event and was challenged by Cesaro.

A thirty-minute classic unfolded as Cena’s early control was taken over by a demonstrative Cesaro, who accomplished one handed suplexes with squats, and landed a heavy Double Stomp on the outside. Cena’s attempts to take back control were cut off by Cesaro Crossface and three deadlift Gutwrench Suplexes in a row, gaining a two count for it. An attempted AA was reversed three times, including one with Cesaro impressively landing on his feet, and even the fourth attempt only earning a two count.

It took a second successful AA, this time from the second rope, for Cena to put away his biggest challenge yet as U.S. Champion. 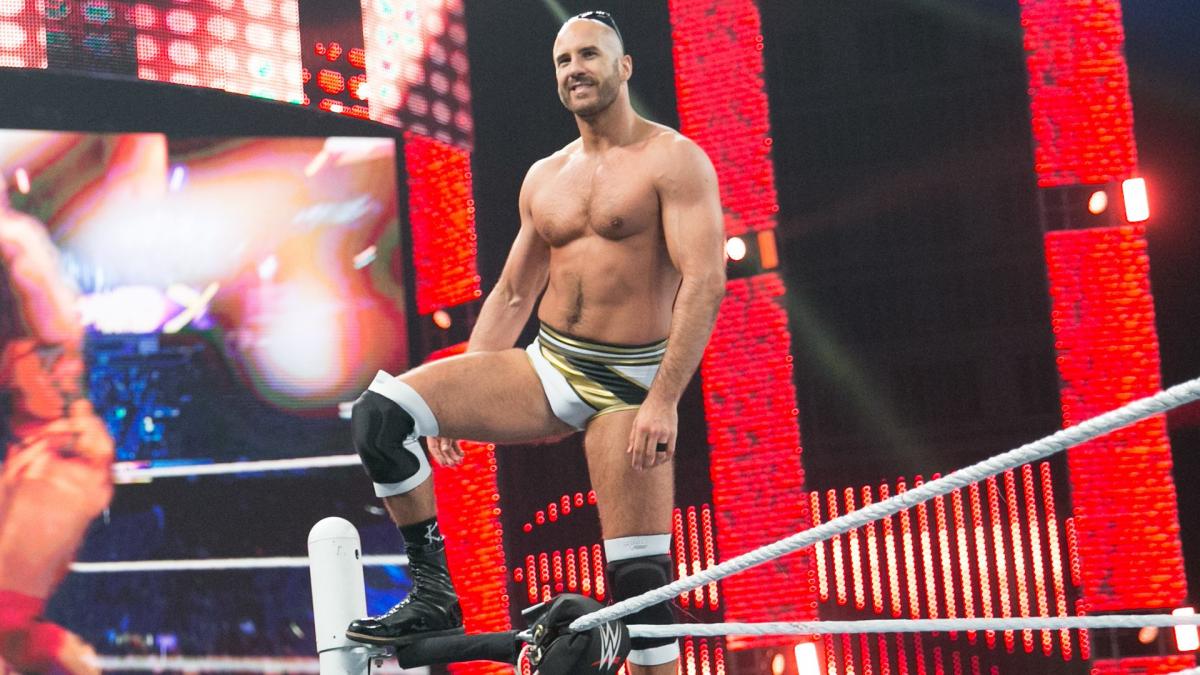 Sometimes, you just need to put four reliable talents in a ring and let them wrestle. The Miz had been Intercontinental Champion since the night after WrestleMania, while Kevin Owens and Sami Zayn had reignited their feud on the main roster. The match itself stole the show, kicking off the match with a Helluva Kick to Owens and continuing the high octane energy throughout. While the main sub-plot focused on the hatred between Zayn and Owens, Cesaro was an undoubted highlight by utilising his strength.

Whether suplexing both Miz and Zayn simultaneously or hitting a Powerbomb during a Tower of Doom spot, Cesaro manhandled his opponents with relative ease. However, the finish itself had Zayn hitting a powerful Helluva Kick to Cesaro, with Owens dragging Zayn to the outside, allowing a sneaky Miz to take advantage and getting the three count. 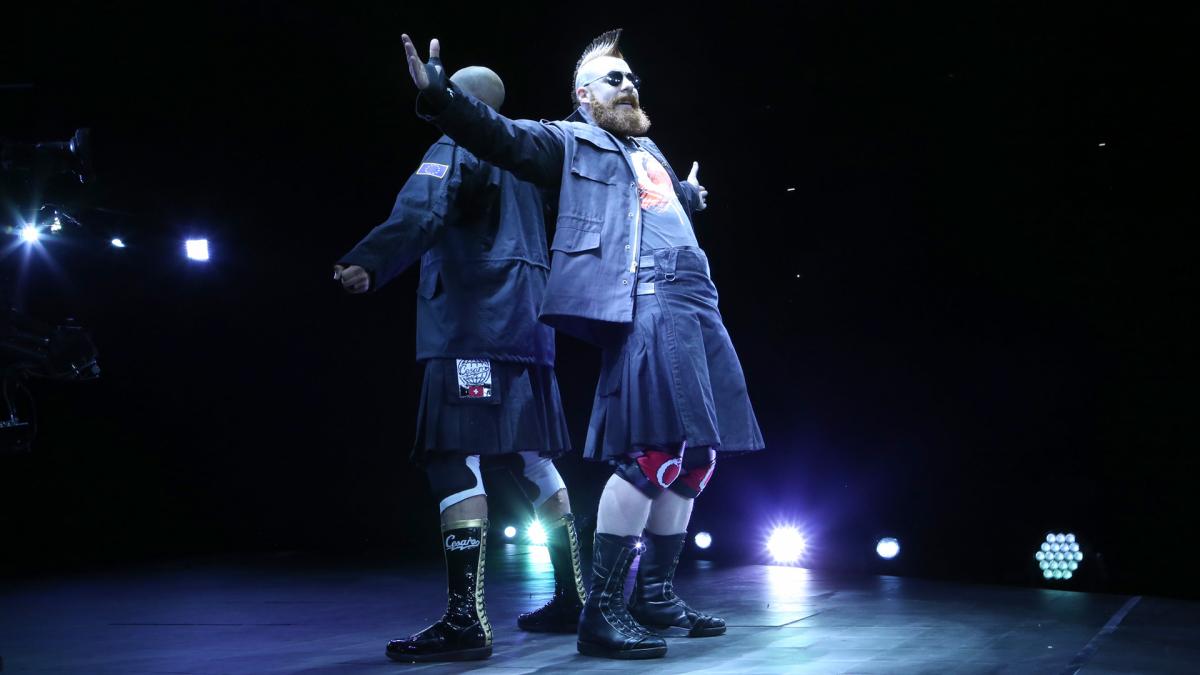 During his career, Cesaro has previously proven that he was just as gifted a tag team wrestler as he was a solo star. Whether on the independents with Chris Hero, or as the size and strength to Tyson Kidd’s intelligence, Cesaro always demonstrated chemistry with his partners, and sometimes, even with an enemy. The Best-of-Seven series with Sheamus eventually transitioned into a tag team that ran roughshod from 2016 to 2019.

By this time, they had held the titles twice, losing to Ambrose & Rollins at SumerSlam and earning a rematch at No Mercy. A masterclass in cutting off the ring, Ambrose played the man in peril as Sheamus and Cesaro decimated him in their corner. A major moment occurred when Cesaro smacked a ring post and lost several of his front teeth, but unsurprisingly, he toughed it out for the rest of the match.

An errant Sheamus Brogue Kick wiped out Cesaro and left Sheamus himself open to Dirty Deeds, allowing Ambrose and Rollins to retain. 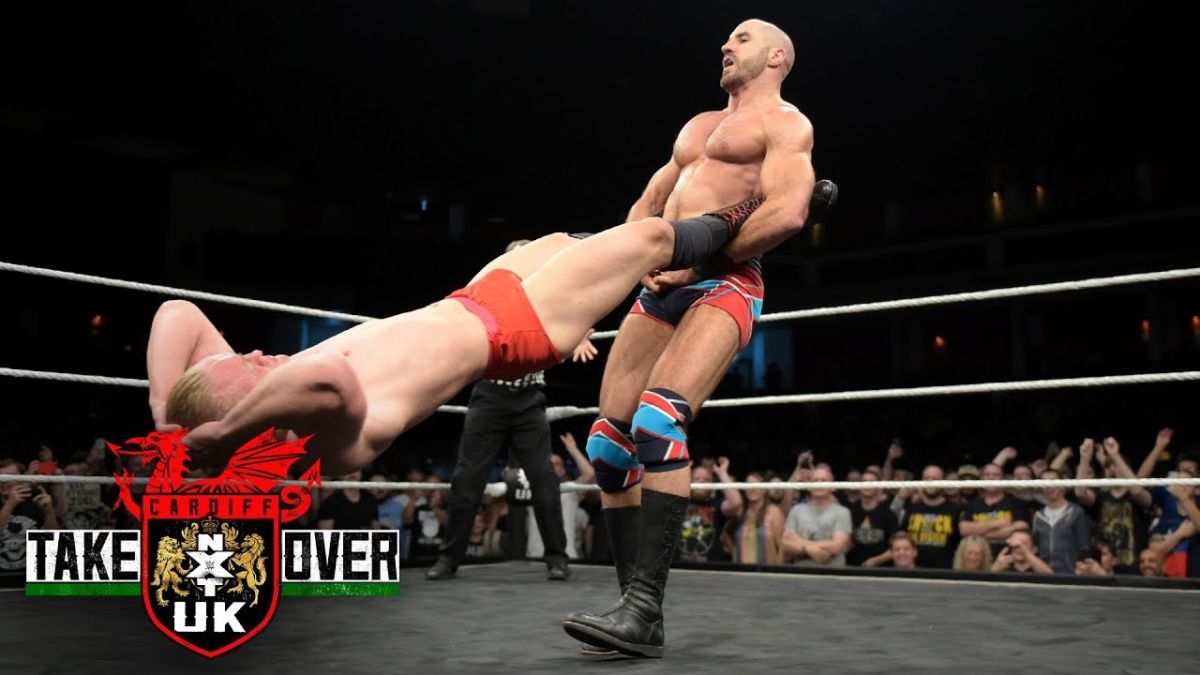 During the build-up to NXT UK Takeover: Cardiff, Cesaro announced that he was issuing an open challenge to any member of the locker room. At the event itself, whilst discussing the open challenge in an interview, Ilja walked past and straight to the ring, confirming he was challenging Cesaro to a match.

Both men are recognised for being physically tough individuals and they quickly proved that with hard hitting forearms and uppercuts. At one point Cesaro demonstrated the Big Swing with forty seconds of spinning, to the crowd’s delight. Dragunov’s late momentum with a Senton seemingly had him set up to hit the Torpedo Moscow, but a determined Cesaro countered with a classic Uppercut and a Neutralizer to claim a hard earned victory, though Ilja could leave with his head held high.

The potential of Cesaro on NXT UK unfortunately never materialised in the long run.

Barring the historical main event on Night One, Cesaro against Rollins was match of the night, cheered on by a Cesaro-supporting crowd throughout. Early attacks to Cesaro’s right arm had him battling through the pain, countering the Curb Stomp with a colossal Uppercut and kicking out of a Pedigree. On the biggest stage possible, Cesaro busted out his infamous UFO, spinning Rollins around on his shoulders with abnormal strength, and followed up with 23 Swings and a second Neutralizer for an emphatic, clean victory.

Afterwards, Cesaro was able to bask in a richly deserved ovation from the audience.

After his huge victory at WrestleMania, Cesaro continued his momentum by challenging the Universal Champion Roman Reigns, defeating Rollins a second time to become number one contender. Reigns entered the match having held the title for 259 days with victories over Braun Strowman, Jey Uso, Kevin Owens, Daniel Bryan and Edge in the process, while this was Cesaro’s first ever shot at the title. Reigns quickly focused on weakening Cesaro’s shoulder to weaken the challenger’s power game, but Cesaro transitioned to using his pace, agility and submission expertise to make up for it.

Cesaro succeeded with several close two counts after a Spinning Lariat and a Superplex off the middle rope, and kicked out of the Superman Punch. An exchange of submissions between the two had the crowd on edge, Cesaro escaping the Guillotine Choke and utilising a Sharpshooter and Crossface in a failed attempt to achieve victory.

In the end, Reigns’ third attempt at the Guillotine Choke clinched the victory, with Cesaro passing out from the pain. However, in his first major PPV title match, Cesaro demonstrated he more than deserved that spot.

READ NEXT: Cody Rhodes Needs To Become WWE Champion Sooner Rather Than Later