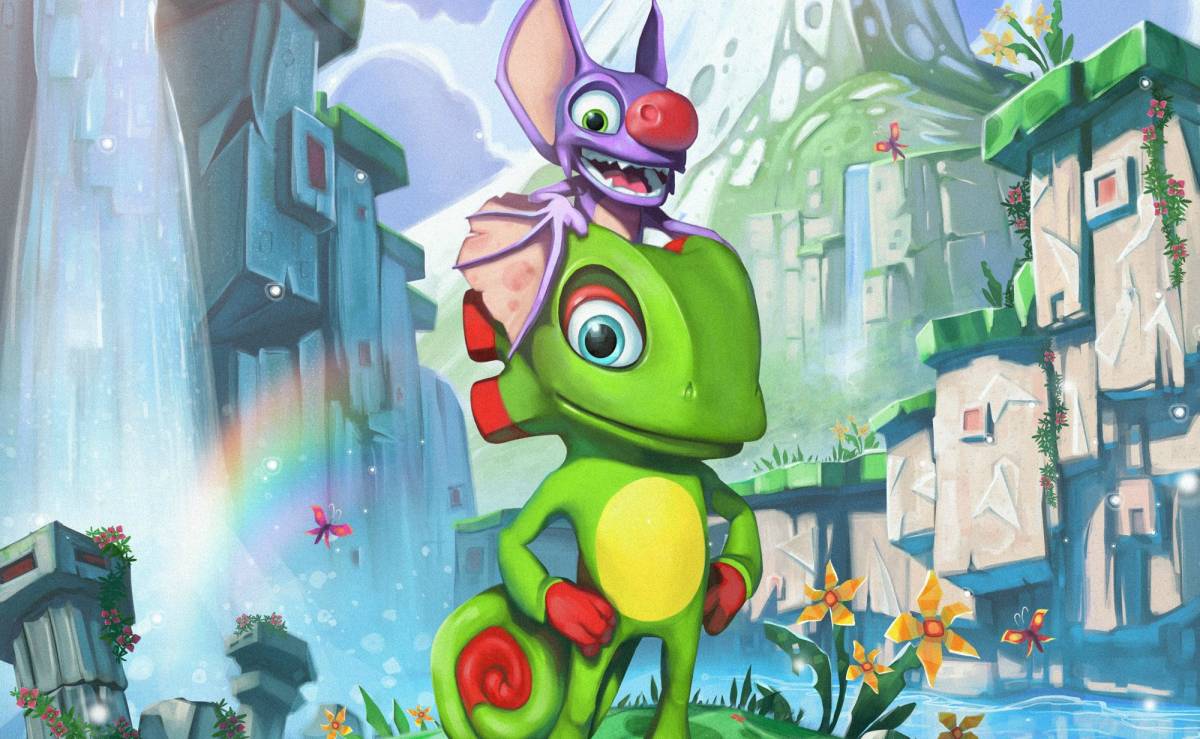 The Banjo-Kazooie games are very close to my heart. Some of my earliest gaming memories are of being huddled around my friend’s N64 with my little brother, collecting jiggies, marvelling at the vast worlds, imitating the noises Kazooie made – something we do to this day. Both Banjo-Kazooie and Banjo-Tooie are some of the most well made 3D platformers ever and easily stand beside Mario 64 in the pantheon of Nintendo 64 platformers.

And so, when Yooka-Laylee appeared on Kickstarter in 2015, there were high expectations. Playtonic, a new studio, had been formed primarily of people who’d worked on Banjo-Kazooie and Donkey Kong Country. The same team who’d gone on to make Viva Pinata before being effectively decimated by Microsoft’s mismanagement, which saw a creative and unique team turned into a Kinect shovelware developer, before being offered a last hurrah with a disappointing third Banjo-Kazooie game, Nuts and Bolts. 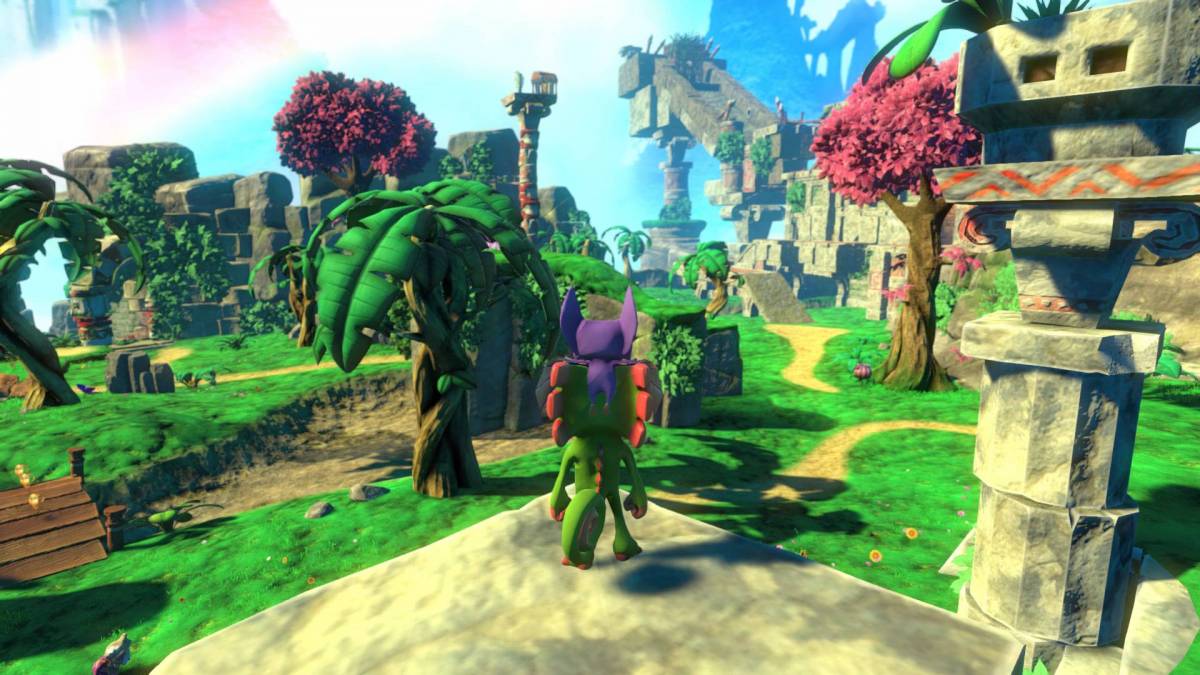 Here, then, was Playtonic’s pitch: fund us, and we’ll bring back everything you loved about the Banjo games. They promised bright colours, unique characters, and collectables galore. Much as the last several years have seen indie developers focus on paying homage to and recreating the feeling of 8-bit, 2D games of the 80s – think Shovel Knight – Playtonic seemed poised to enter the next logical step, the recreation of the games that dominated the 90s.

And in this respect, they succeeded. The first time I booted the game (I was playing on Xbox One, for reference), it felt like being taken back to that time so long ago. The logo is playful, the music starts immediately and the menu is clearly as close to Banjo as legally allowed, and the same can be said of the game as a whole. If you ever played those games, you will feel at home from the start of Yooka-Laylee. 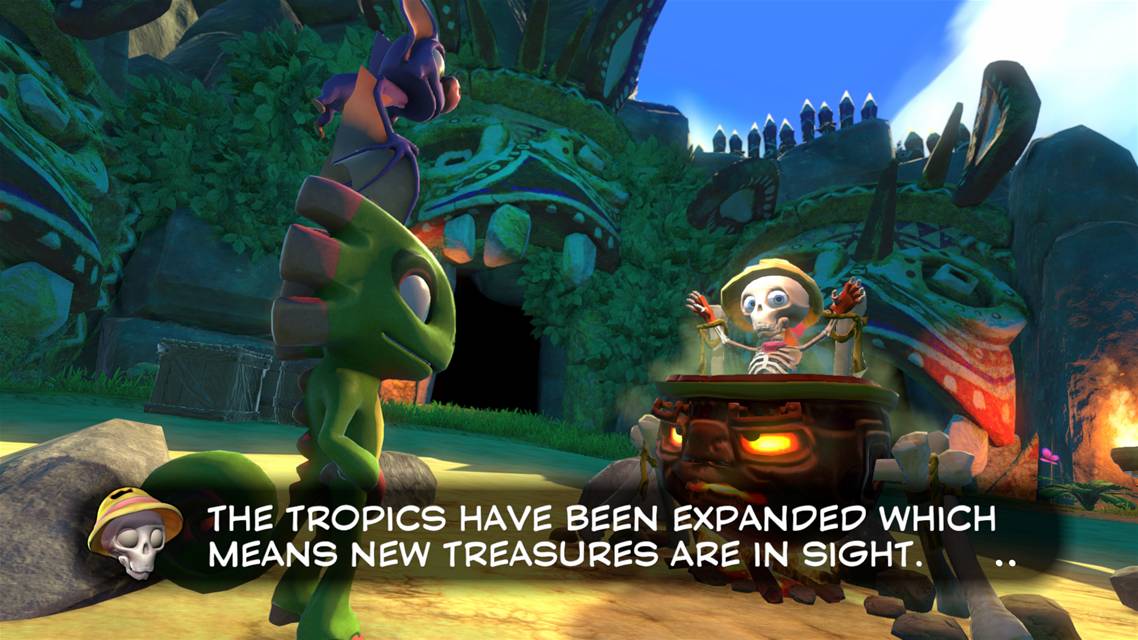 But, unfortunately, this strength is also the game’s biggest weakness. For good or bad, games design – and the art form as a whole – have moved past 3D platformers, and Yooka-Laylee has brought many of the issues with the genre along with it. Conversely to the way Duke Nukem Forever carried its dated development with it, Yooka-Laylee carries its dated elements as badges of honour, a true recreation of what was wrong with these kinds of games and largely still is.

Rare are famous for their writing – in a time where games narratives were still first finding their feet, Rare’s characters – particularly Kazooie – offered dry wit, a sense of snark. The now all-too-familiar ironic and self-referential writing of many games owes its pedigree to Rare. And that same particular sense of humour is on display all through Yooka-Laylee. 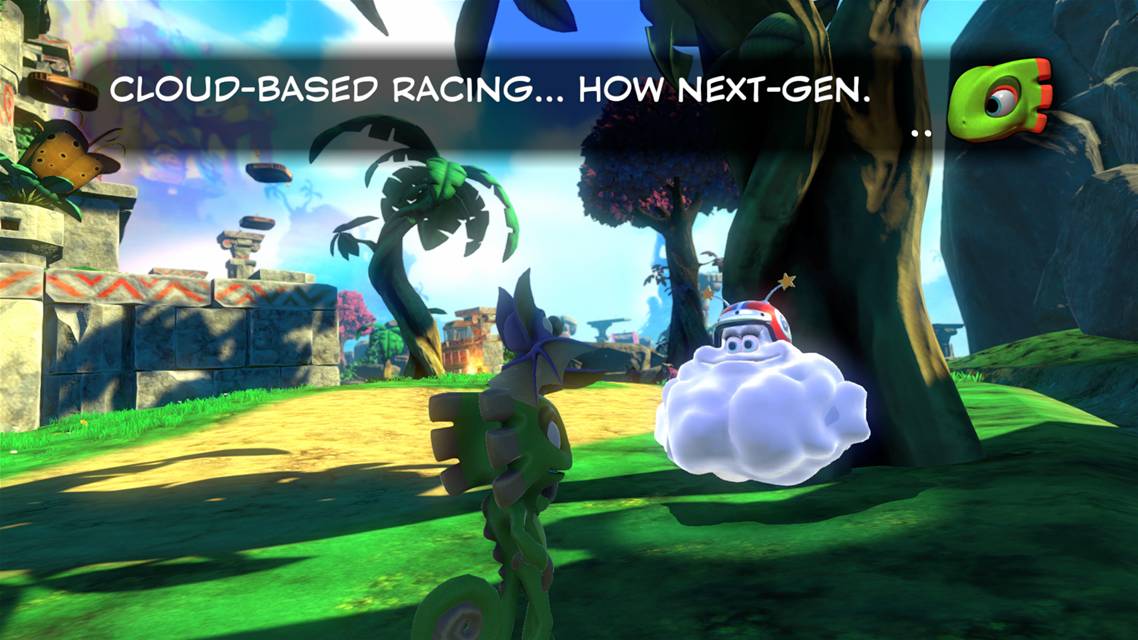 Laylee is quick to point out that certain characters are typical of the medium, or calls a predictable name or characteristic before it’s revealed; he is quick to assume the pig character will have some weight related name and is immediately proven correct. He laments the (thankfully brief) tutorial at the open of the game as he insists that we’ve all read the manual – a nostalgic callback in and of itself. One loading screen joyfully proclaims that, if only cartridges were still popular, the level would have loaded by now.

The story is as bare bones as expected, but does its job of facilitating gameplay. The new antagonist – a book stealing corporate bee named Capital B – cannot outshine Gruntilda, but he is interesting in his own way. The characters are all written distinctly and quickly establish their various personalities, from the absent-minded but genius Dr Puzz (complete with tentacle arms from a miscalculation with her transformative device) to the slimy and untrustworthy Trowzer, a literal snake. 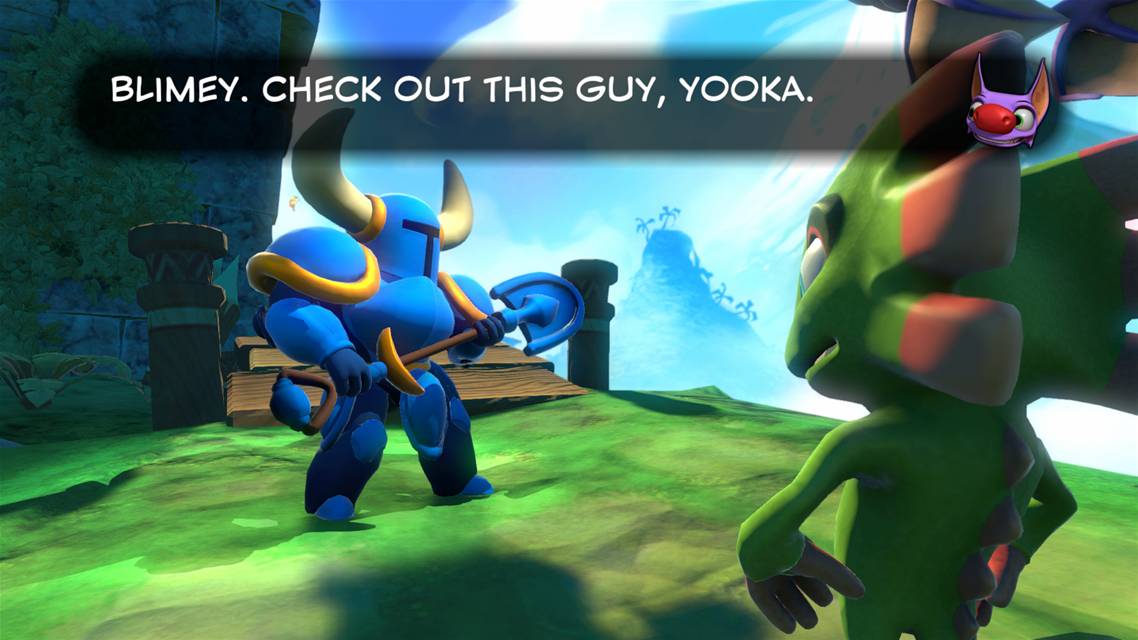 No awards will be won by the writing on show here, but it all comes together to create a cohesive and consistent package, one wherein every character feels at home in this world. Indeed, instead of feeling overwhelming and wholly new, in many ways these characters feel as if they’ve resided inside this world a while before the player arrived and will continue to be here after they leave. Doubtless, we will see them and more in the sequel.

It would be remiss to understate quite how large a role the audio in Yooka-Laylee plays in establishing the tone of the game. The music isn’t quite as memorable here as it was in Banjo, but it also plays a slightly different role – rather than dominating at all times, the music is more melodic and soft, an undertone to your adventures in this world.

And once again, Playtonic’s determination to stick to the Nintendo 64-era roots of game design start to grate once the initial nostalgia wears off. The first time I heard a character ‘speak’, I laughed. Text dialogue is accompanied by squeaks, grunts, sighs, which quickly become almost painful in how piercing and misplaced they feel. As true to their roots these sounds may be, I can’t help feel that less shrill sounds could have served the same purpose. Slight murmurs and grunts more akin to Zelda titles would have been quite welcome.

Level design is mostly excellent, with the first world in particular welcoming new players to, effectively, everything they could ask for. Small swarms of enemies roam the land, bright colours abound and bizarre characters are hidden in each nook and cranny. I enjoyed searching for the myriad of collectables simply because it is fun to play, to explore these worlds. 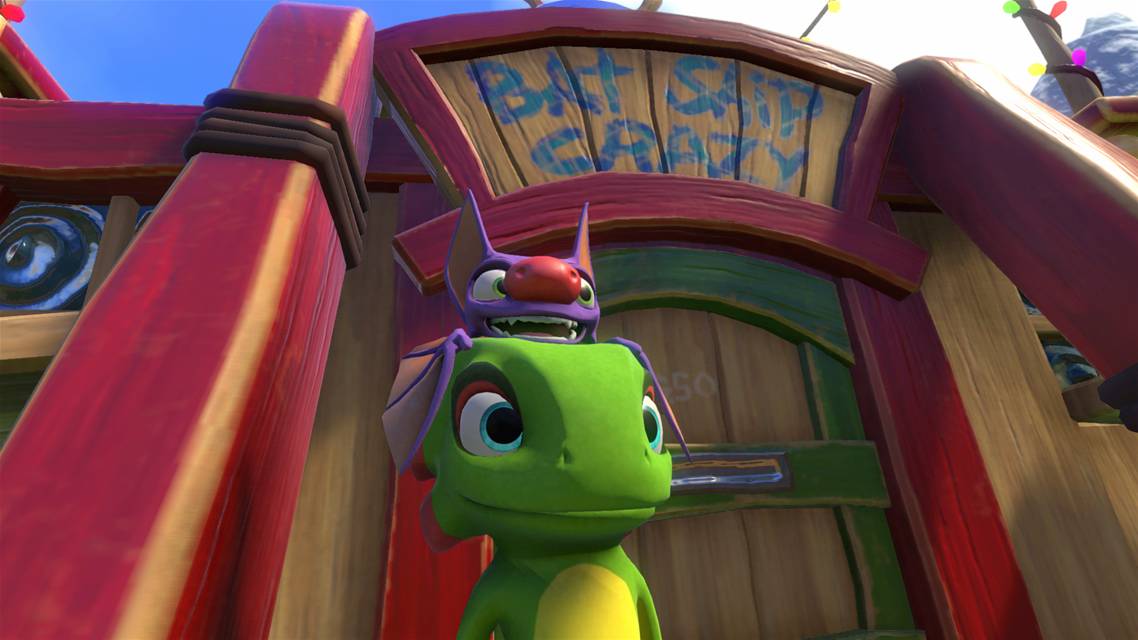 They are vastly larger than the worlds of Banjo, and this helps create a sense of scale I wasn’t personally anticipating. This universe does not feel constrained or limited at all, and each stage is additionally expandable. A novel concept that throws an almost Metroid-esque slant on the exploration, as players are incentivised to return to areas once they’ve acquired new abilities and transformations that let them reach and complete new challenges and objectives.

One drawback to the level design is – again – a fault of the game’s 90s heritage. A lack of any kind of world map led to me frequently losing my place, and the central hub level can often be an unwieldy challenge unto itself, making progress more difficult than it should have been. The ability to quickly select a different stage without having to find my way to and from each portal would have been appreciated. 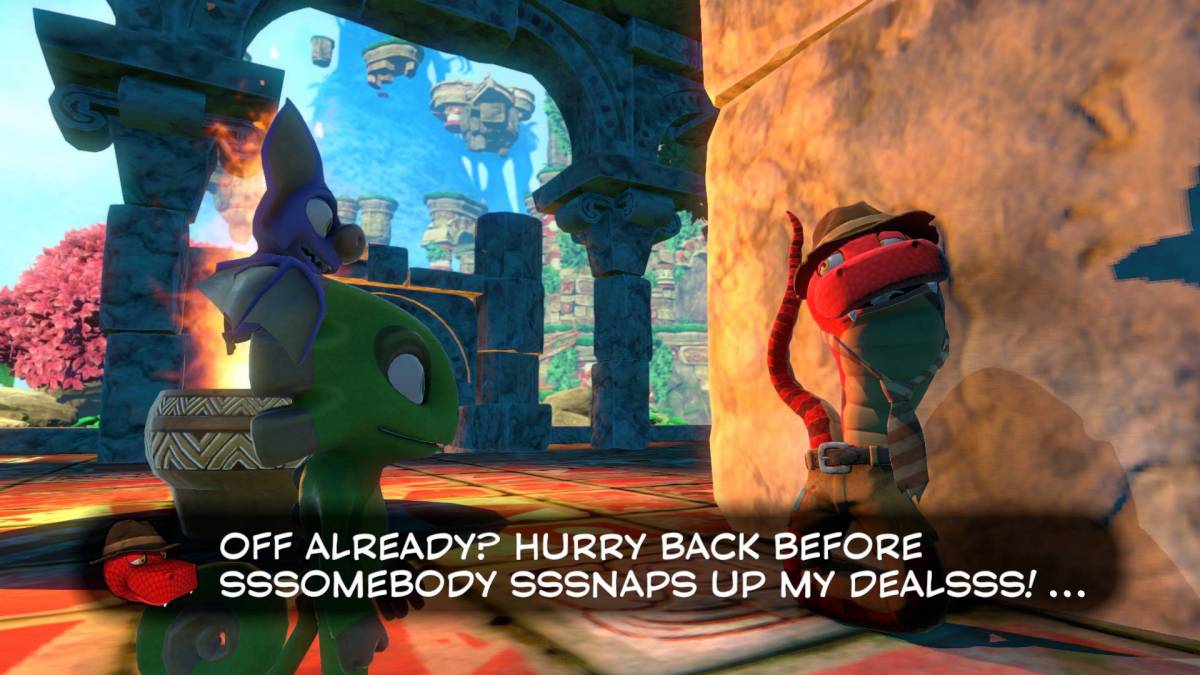 It’s a shame, then, that my time in the world of Yooka-Laylee was often marred, not by the game itself, but by performance. At times, the game is locked at 30FPS, at others it ground to a halt, seemingly at random. This, combined with an unwieldy camera which sometimes locks into an unexpected perspective, or simply refuses to frame the player correctly, gets in the way of the player.

Missing a jump or falling off a platform is a key part of getting to grips with a 3D platformer. But that should always be the fault of the player, not the game. I’ve not played on PS4 or PC/Mac/Linux, but it seems a fair assumption that this isn’t an Xbox exclusive issue. Doubtless, post-release patches will address these issues but it is disappointing that they are there at all.

Yooka-Laylee is exactly, to a fault, what it set out to be. It isn’t a modern game masquerading as a retro one, but the opposite in terms of design and implementation. And it’s a very hard game at points. I couldn’t imagine many children being able to beat some of the later stages without the help of older siblings or parents, which raises the question of who, exactly, Yooka-Laylee is for. Those passionate enough to have crowdfunded the game will be getting a copy upon release, and with a new generation growing up on modern games, which have little to nothing in common with the design of Yooka-Laylee, I have to wonder if the small annoyances – endless collectables, lack of voice acting – which are easy for the older player to dismiss as nostalgic, will be harder pills to swallow for new players.

Yooka-Laylee achieves everything it sets out to do. I loved it, despite its shortcomings – but those issues, largely, shouldn’t have been there in the first place. I can’t wait to see what Playtonic does next, as beneath the design and technical problems, at a pure gameplay level, Yooka-Laylee is the best 3D platformer since Super Mario Galaxy.