The Wolf of Wall Street – Review

Veteran director Martin Scorsese returns with the hotly-tipped-for-awards glory, The Wolf of Wall street. Chris Mcsweeney reviews the role that could clinch Leo his Oscar.

The short version is that you should go and see this movie bloody immediately because it is simply brilliant. It’s a 3-hour masterpiece with unavoidable comparisons to Goodfellas, but with a winning comedic formula spearheaded by the unlimited charisma of Leonardo DiCaprio’s ‘Jordan Belfort’ character and Jonah Hill’s his excellent flabby sidekick. Fat jokes aside, the remainder of this review will focus on defending the assertions made in the lines above. 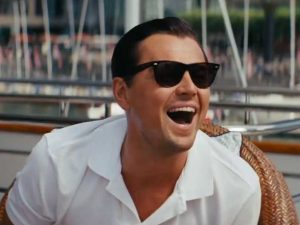 The Wolf of Wall Street is the true story of anti-hero Jordan Belfort’s meteoric rise to Wall Street dominance, with all the excess that we’ve come to expect from the real-life coke-snorting, whore-mongering banking elite that we’ve all heard whispers of.

This movie is very, very, very funny. The pitch-perfect performances from the entire cast bring several laughs a minute with solid comic timing and a hint of improvisation here and there. I never thought I’d laugh at straight-faced ironic humour from the likes of Matthew McConaughey and Rob Reiner, but here we are. Word to the wise though, many of the gags are drug-related, sex-related or both, so you likely won’t enjoy the film if you’re a squeamish Sandra.

Comparatively, Leonardo DiCaprio’s numerous past Oscar nods look more like Chris O’Donnell performances here. For the first time, Leo’s assumed a character that you can tell was his by design – as opposed to recent performances that he may have been miscast for (in particular Gatsby and Django Unchained’s Calvin Candie). With equal parts charm, sleaze and quick-witted hilarity, he creates an impeccably charismatic anti-hero that brings the house down, particularly during his numerous rousing speeches to his fanatic employees. He also surprises everyone with a superb turn at physical comedy – particularly during his and Jonah Hill’s fight scene on Quaaludes (think Ketamine).

Behind the camera, Martin Scorsese proves beyond any reasonable doubt that he is one of the few veteran directors that can do what he did in his heyday with the same energy and exuberance, if not more so. It’s wonderfully shot with bright cinematography and snappy editing with skills to pay the bills.

It’s so much more than a bog-standard rise-and-fall story (although with Scorsese behind the camera, those are also wonderful). It is a modern classic that challenges you right in the morals. You will also laugh your bollocks off and it will want to make you throw Academy Awards at everyone involved, particularly Leo. It is the comedy of the decade – I’m calling it right now.