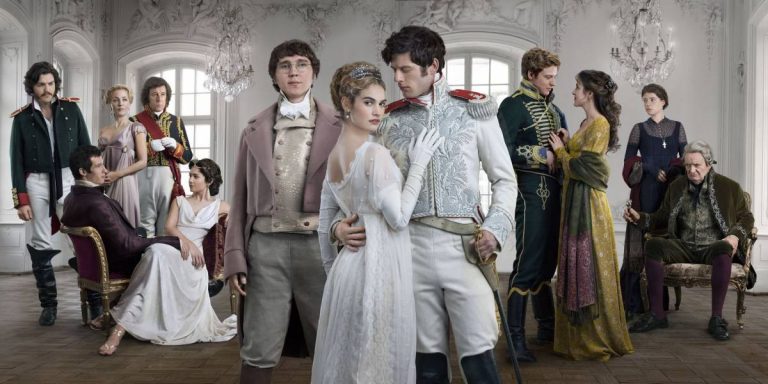 I’ll admit to being something of a latecomer to costume dramas. As a teenager it all looked like a lot of pale people in frock coats and corsets talking for a long time about not very much for reasons I couldn’t understand. There was barely any fighting in them, and when there was it was usually hard to figure out why it was happening. My teenage brain was easily pleased as long as there was at least one gun fight before the credits rolled.

As an adult paying off a cultural debt of teenage ignorance I’ve long since made peace with costume dramas. Those still struggling with all the ballrooms and breechers probably won’t find anything to win them over in the BBC’s new adaptation of Leo Tolstoy’s War & Peace, but for the converted it’s definitely worth a watch.

Like these things go, it’s the past, but this time it’s the past in Russia and somehow everything’s bigger and brighter. It’s hard to say whether this is a reflection of Russian fashions of the period or a more lavish budget for the wardrobe department, which is on top form. Anyway, it’s 1805 and the Russian aristocracy are suffering from a kind of austere alarm at the news that Napoleon Bonaparte just up and invaded Austria. Russia is going to war, and some of its idle rich are jostling for the chance to run head first at French bayonets.

What’s evident from the first major scene, an extended shot of a high class soiree held by Gillian Anderson’s Anna Pavlovna Scherer, is just how much characterisation War & Peace is capable of squeezing in to small gaps. In just a couple of minutes we’re introduced to a buffet of characters, their personalities and their relationships. It’s actually slightly remarkable that War & Peace achieves this, but considering the jumbo-sized list of characters it’s juggling it doesn’t  really have any other choice.

So, who’s who in War and Peace’s decadent Russian ruling class? Our main character is Pierre, the bookish but clumsy son of a Russian count. Pierre is full of ideas but utterly lacking in guile or duplicity, which in Russian high society makes him something akin to a lamb who’s wandered in to a pack of wolves. As his father lays dying in Moscow, Pierre seems utterly oblivious of the fact that a war for his inheritance is happening all around him. Paul Dano (12 Years a Slave) fits a difficult role here, and is probably the best of the show’s leads.

There’s also James Norton (Happy Valley) as Prince Andrei, who’s boredom has driven him to the army, and Lily James as Pierre’s cousin Natasha, less wealthy and perhaps more of a realist than her relation. As a name on the rise James is probably responsible for a solid chunk of the audience tuning in here, but as of episode one she’s largely reduced to a sub-plot involving her gentleman friend leaving for war. Not that she doesn’t do a great job with what she’s given, and we’re definitely left hoping she gets more screen time.

One of the hardest things newcomers struggle with (I know I did) when watching costume dramas is wrapping their heads round the social norms of the time. It’s probably the same feeling non-fantasy fans have when watching Lord of the Rings. If you can get on board with it though, War and Peace‘s world, and its rules, are its biggest asset. Around Pierre are a Burke’s Peerage of characters making schemes and planning power plays, often invisibly, for the wealth headed his way. His Uncle Mikhail (screen veteran Kenneth Cranham) and the deliciously shrewd Anna Mikhailovna (Rebecca Front in an outstanding turn) both jostle for influence to varying success.

Exactly how much of this politicking will continue in future episodes is a mystery unless you’ve tackled the book (1,225 pages, before you ask), but if this is all we get, the show will have lost an important component going forward. The well observed humour that derives from Pierre’s confusion at the scheming around him delivered the best moments of the opening episode.

If there is a weak link in the first episode it’s the story of Prince Andrei and his trip to war. Andrei is something of a cypher in this opening outing, and it’s not really conveyed why he’s leaving his pregnant wife at home and joining the army. Is he no longer in love? Is he searching for glory? By intention or not, James Norton doesn’t give much away other than that the prince is young and broody. The guy definitely has something going on though, so here’s hoping he drops all the enigmatic moping before it gets anymore boring.

War & Peace is epic in scale. Ostensibly about Napoleon’s invasion of Russia in 1812, the first episode left us in 1805 with years of the saga to play out. For the remaining five episodes there are probably a lot of twists and turns (and fighting, for those who are hoping) to cram into not a great amount of air time.

If you’re into costume dramas you will adore this one, possibly the BBC’s best since Parade’s End. The production values are all out, the cast is largely strong and somehow, in a sea of characters, each one is distinctive and easy to recognise from the others. The script is tightly packed with characterisation, but appears to allow important moments room to breath. Exactly how much readers of the book would agree though is hard to say without speaking to one. This won’t convert sceptics or blow any minds, but it is exactly the kind of quality costume drama the BBC are renowned for worldwide.