An excellent evolution of the series that retains, improves, and builds upon the already high quality of its predecessor. 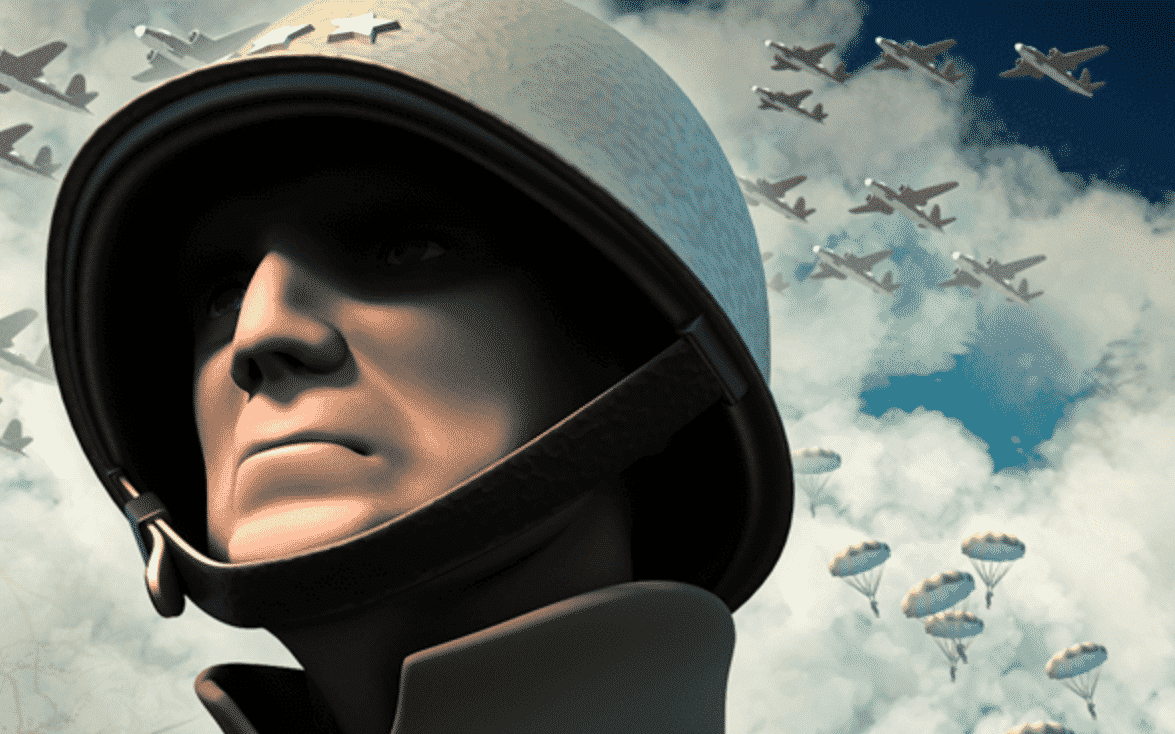 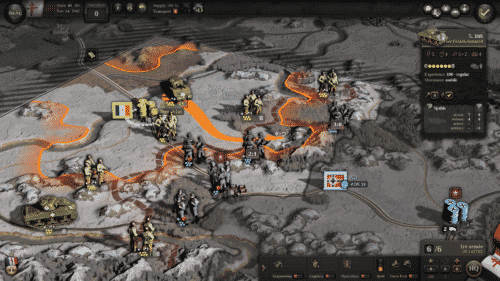 One of the many issues historical wargames face is the accessibility to a larger audience as they’re usually rather complex and require an undue amount of time to learn, a la strategy games published by Slitherine. Unity of Command 2 is an excellent sequel that innovates upon the original, maintaining the good from its predecessor while also appealing to a wider audience.

Whereas Unity of Command was set on the Eastern Front, centering on the Stalingrad campaign of 1942-43 (DLC not withstanding), Unity of Command 2 shifts to the Western Front. The game expands to three theaters: Tunisia, Italy, and Western Europe. Throughout these three theaters the player will take command of the combined forces of the US, the British Empire, and the Free French.

Though the combat styles of each nation doesn’t differ significantly, each nation’s units have enough minor differences, like strength of divisions, veterancy, and specialist units, to give players more combat variables to work with in each scenario, compared to the relatively uniform Soviet forces in the original title or the incredibly low quality Romanian, Hungarian, and Italian troops with limited tactical value. 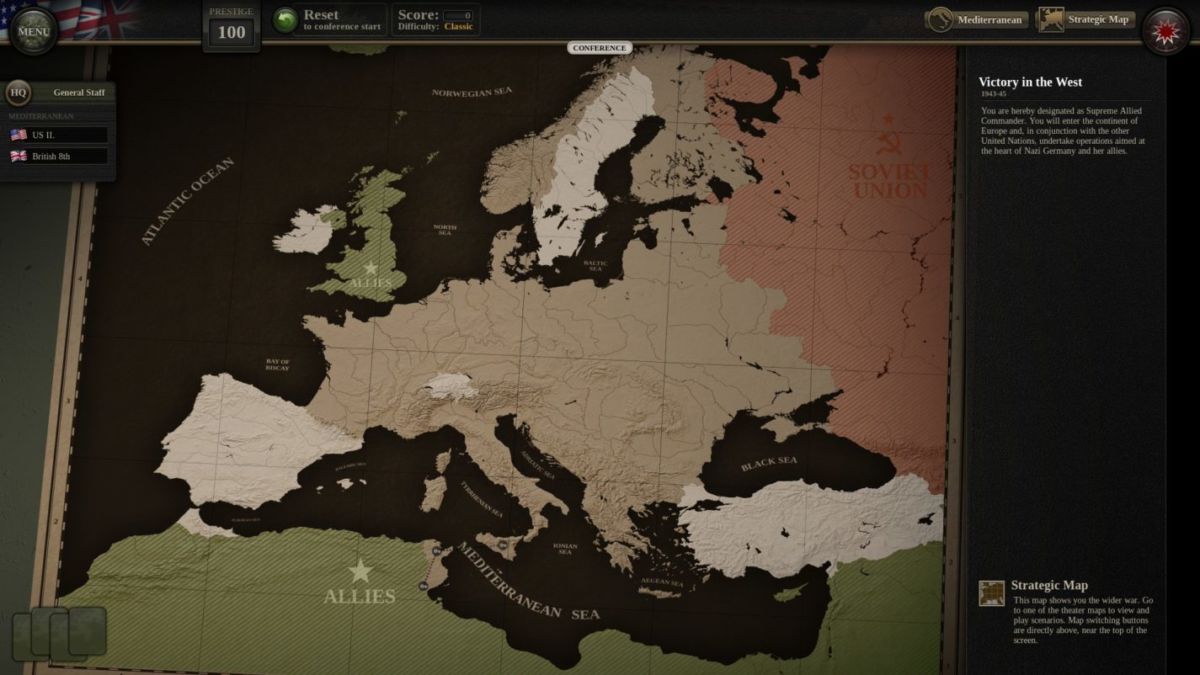 There are two main modes in the game: individual scenarios and the campaign. Scenarios are separate missions where players are given a set number of troops, a set amount of turns, and a number of objectives to complete within a time limit. The scale of the scenarios is operational or low-level strategic, meaning that players will not necessarily worry about single units or production chains of their respective nations, but instead on the success of a single operation. Some scenarios, only if played separately from the campaign, will even have multiple setups that change up some of the starting troop displacement. Moreover, most missions will start with a pre-battle screen where the player can assign reinforcements, move HQs, shift supply depots, and take the time to plan their moves.

The campaign mode takes all the scenarios and ties them into a single narrative covering the Western Front, adding elements of unit progression and optional scenarios to create more strategic context to the player’s actions. At the start of a theater operation, which is a number of scenarios linked together, players can upgrade their headquarters and purchase a randomized assortment of assets, like extra bombing raids, supply line extensions, more units, and other special abilities. For example, the first stage of the campaign is the Tunisian and Sicilian campaigns spread over three scenarios. Before the start of the first scenario, the Allies will have the option of spending Prestige and buy upgrades or theater assets to aid them in their operations. 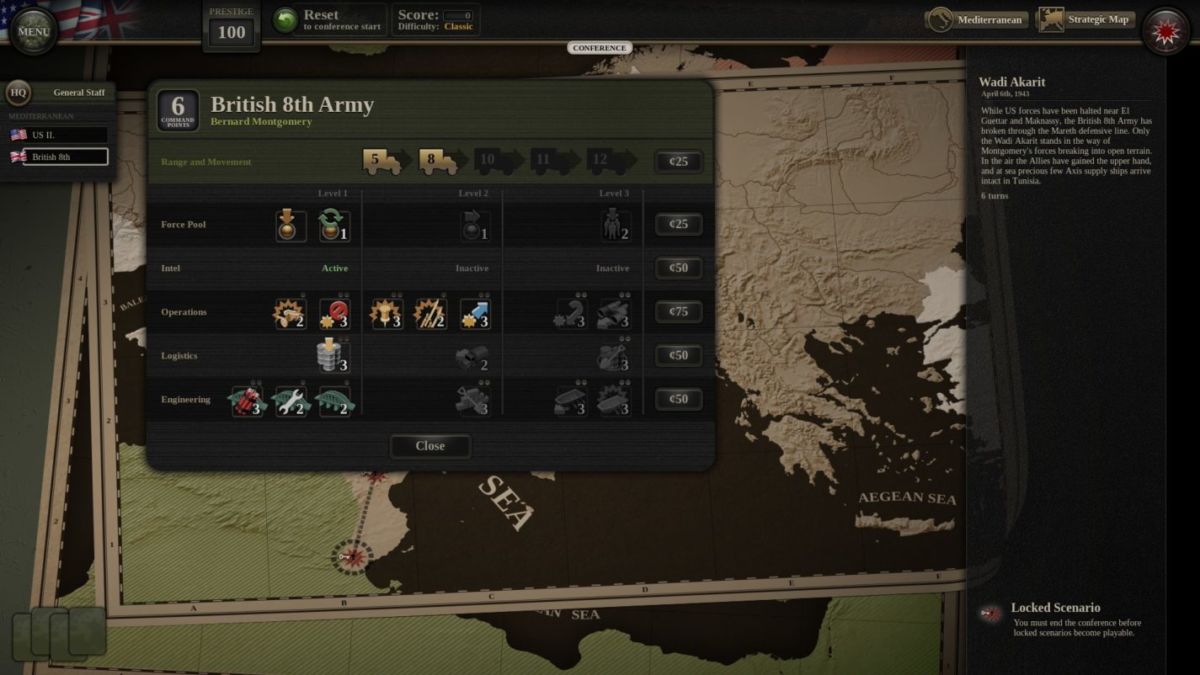 The campaign mode has been effectively expanded since the first installment in the series. In the original scenarios were simply tied together for the sake of the historical narrative without any strategic context or effect from mission to mission, the campaign system of Unity of Command 2 is both longer and each mission is played within a larger context of developing the Allied troops across three years of conflict. This allows the player to become more invested in caring for their troops and the decisions that they make when spending their prestige in upgrading their HQs.

Unity of Command 2 can be played in both single player or local hotseat multiplayer, which is a departure from its predecessor, which had online but not local multiplayer. However, this doesn’t hamper the experience of the game as the structure of scenarios follows a simple binary of offense versus defense, with the player always on the attack.

One feature that increases the accessibility and replayability of the game is the addition of four difficulty levels, which allow you to tailor your experience, compared to the previous installment that had none. The presence of difficulty settings will ease players into the deep system at play in Unity of Command 2. It’s great for the wargame genre as a whole seeing developers focus on a user-friendly experience, as they are notorious for not being the most inviting games. 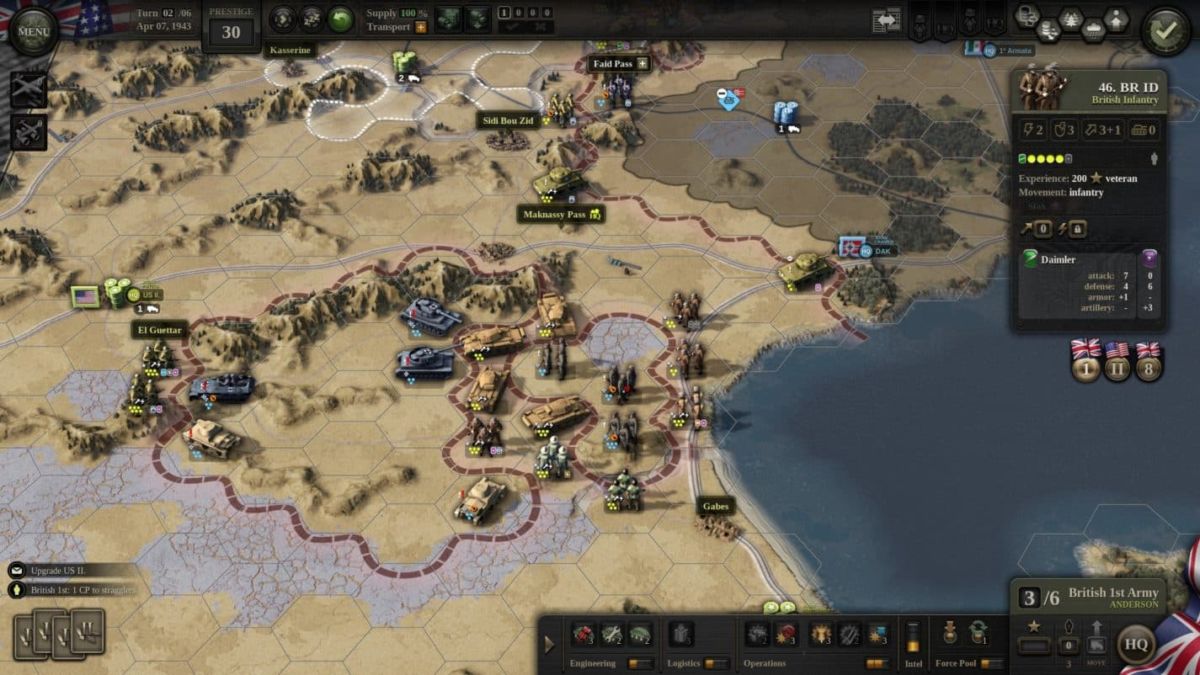 When players finally go to battle in the campaign or in any of the multitude of premade scenarios, they will have to learn two types of units: divisions and HQs. Divisions are the historical troop formations that will move, attack, and take objectives. Division types include armor, infantry, and mechanized infantry. Each unit will have a number of steps or hit points, denoting its total strength.

These units can be reinforced with extra strength points, up to a maximum of six, and with specialist steps like artillery, scouts, extra attached tanks, elite troops, anti-tank weapons or engineers to a maximum of three per unit. Specialist steps add extra combat steps, affect combat odds, and some are linked with HQ active abilities.

HQs are a command unit that supports all of its subordinate divisions in combat. Every HQ has a zone of command, where all units within that zone can be reinforced or use active abilities. They will also act as rally points for stragglers, which are steps of allied troops that have been damaged and that are falling back to the HQ to regroup and further reinforce. These command units cannot fight, but they can be attacked and disrupted as they have no defenders. Based on the quality of each HQ, they will provide a wide range of active abilities to their subordinate divisions, such as different types of attacks, repairing or destroying bridges, and providing emergency supply. 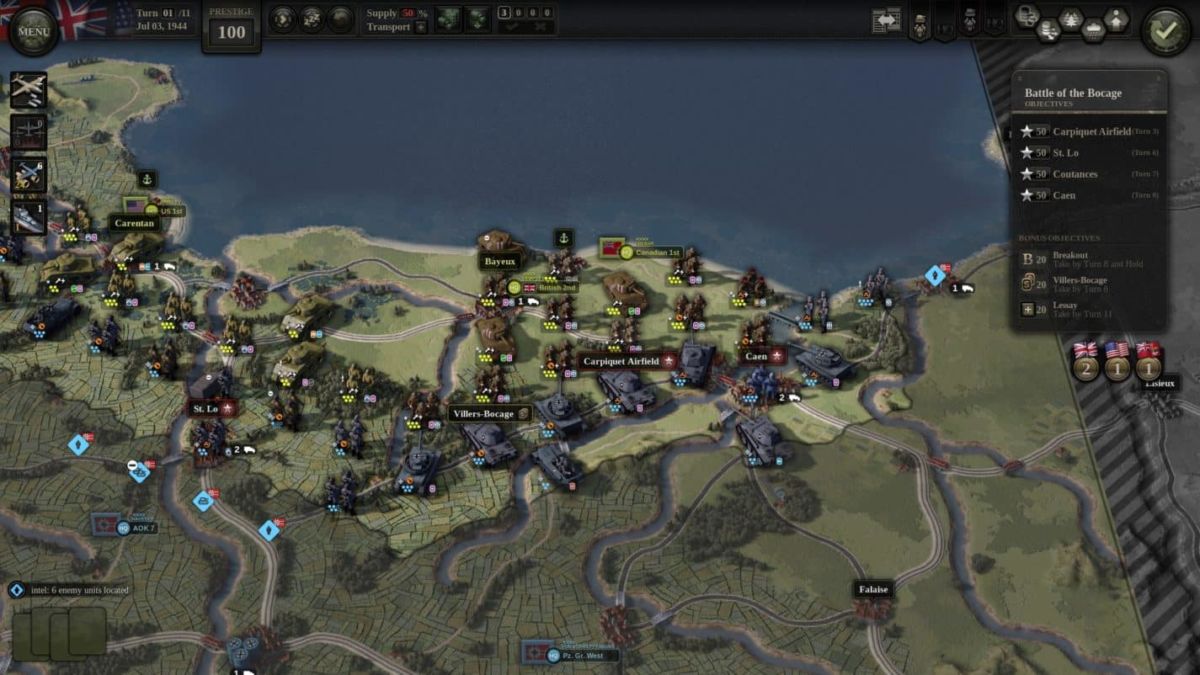 The addition of HQs is the most significant and welcome addition to the combat system of Unity of Command 2. Each HQ can be specialized in specific roles or types of combat, depending on a player’s gameplay approach. This puts more customization and control of unit formations in the hands of the players, increasing replayability and approaches to each scenario.

The most important element of any combat operation is supply. Though Unity of Command 2 is not a game of logistics, supply lines feature heavily in the game and are the primary guiding factor in strategic decision-making. When units are out of supply for too long, they will first lose their ability to attack and then they will begin to weaken, making them vulnerable to counter-attack. It is vital to keep units in supply at all times using main supply lines along railways and supply depots to reach areas that railways would not. Supply depots are more flexible than supply lines, and, just like the addition of HQ customization, supply depots are directly in the control of players and can be easily shifted around the map for different approaches, further increasing replayability.

For the options to the game the developers at 2×2 and Croteam have provided a reasonably wide array of graphical settings, including various colorblind modes. This is much appreciated, even for a small and undemanding game such as this one. Visually, Unity of Command 2 has been updated to a 3D graphics engine, which makes everything easier to look at on the scenario map and all small icons have become easier to read and notice. The music is thematic, although somewhat generic, and can get repetitive at times. While I noticed no major game breaking bugs or crashes, there were a few annoying graphical glitches, likely depending on the GPU someone is using and the graphics setting they choose. 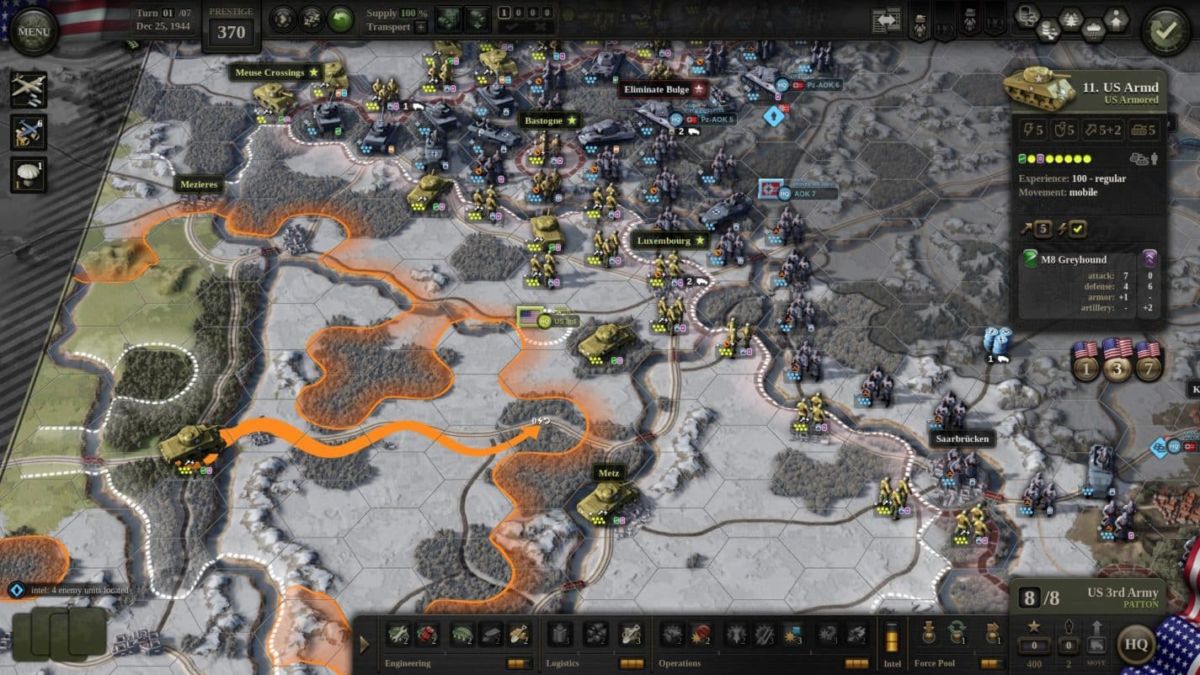 READ NEXT: 15 Best War Games You Should Play

There are two main aspects that make Unity of Command 2 an incredible strategy game and an excellent sequel. The simplicity of unit actions and complexity of decision-making makes the game easy to learn, but hard to master. Moreover, this dynamic gives the game a nice pace, where most of the time will likely be spent in strategic planning, with the execution of a plan happening smoothly and quickly. The audio and visual feedback in the game helps highlight the player’s action.

The second reason for this game’s success is that the developers have innovated and added features that have effectively built upon its predecessor’s systems. The addition of theater assets and HQs active abilities expand the player’s capabilities in reaching their operational objectives. This improves upon the previous installment it could feel like a puzzle where only the right set of optimal moves would complete the mission in time. Now players can approach combat and planning with greater thought and complexity. 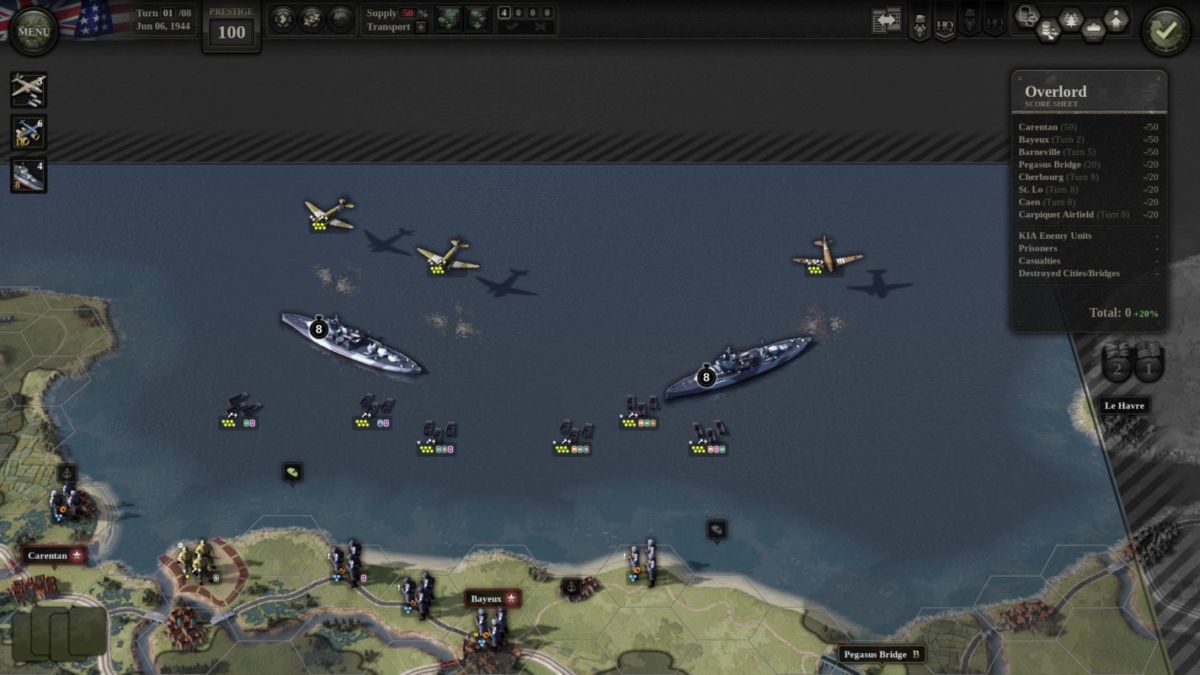 Aside from the major innovations with HQs, variable theater assets, and supply rework, elements of the previous Unity of Command have all been rebalanced and retooled to improve the sequel. Specialist steps are now hugely useful, which in turn makes infantry more valuable. Tank divisions have been nerfed so that they can no longer single handedly win scenarios, and there’s a greater variety of scenarios due to the changing theaters of war on the Western Front. Not to mention, a huge improvement to the appeal of the game is the inclusion of simple and easy tutorials and, of course, the difficulty settings.

Despite the Western Front’s variety in terrain, the general structure of scenarios relying on the attacker-defender binary can get repetitive. In essence, aside from terrain, unit availability, objectives, and theater assets, scenario design has not fundamentally changed since the last installment. There are scenarios that include amphibious landings and paradrops, but the bottom line is that the attacker will always be the strategic attacker, only defending occasional AI counterattacks.

The second critique relates to the level of challenge and RNG of the game. Unity of Command 2 is just as challenging as its predecessor, especially on Classic or higher difficulty where the amount of time to complete scenarios requires ultra aggressive optimal moves and the AI will do its best to get in the player’s way every chance it will get. This in itself is not bad, but becomes problematic combined with RNG. 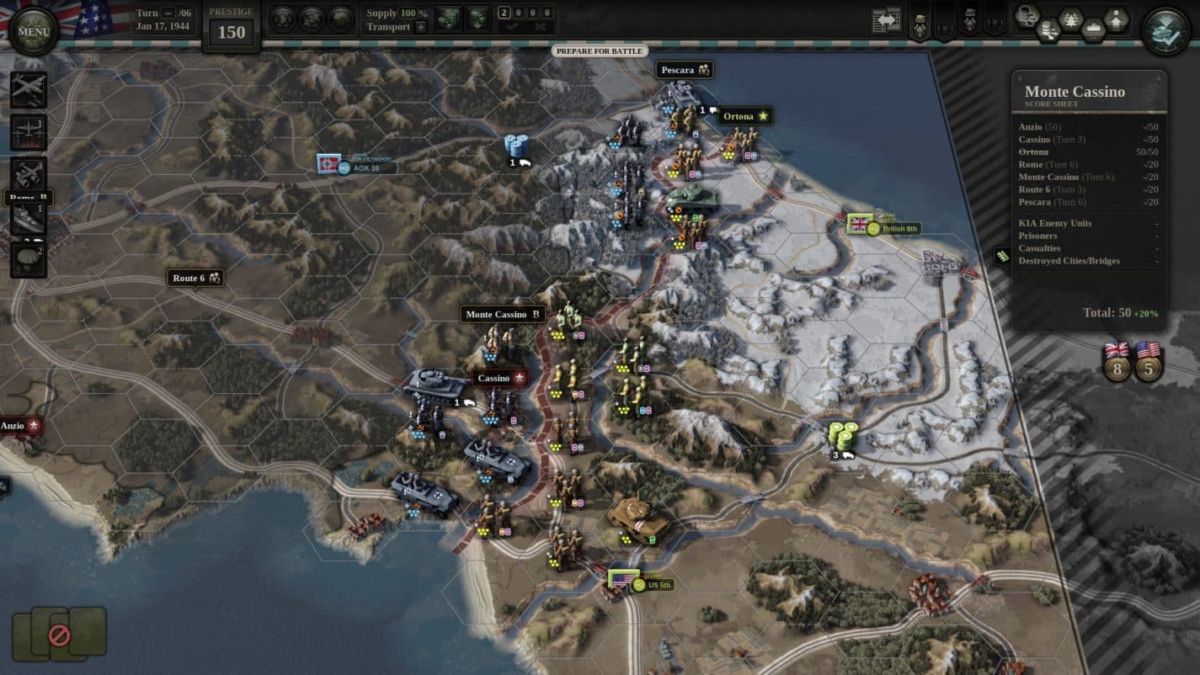 The uncertainty of weather, supply, fog of war, and combat odds are all important in wargames as those features can set a wargame apart from a puzzle. However, specifically on higher difficulties, to take objectives and get their maximum reward some scenarios and player plans can rely on the success of a few units or for there to be clear weather. If RNG is not in the player’s favor in those key moments or actions, an entire plan can fall apart or players won’t be able to complete scenarios in time, which can be frustrating and can force multiple mission restarts, adding to the repetition. This can be especially frustrating in the campaign, where every time a player restarts a scenario their score will decrease.

Even considering these critiques, Unity of Command 2 is an amazing turn-based historical strategy game worthy of anyone’s attention, especially considering all the beginner-friendly elements. For anyone looking for a game that would be an entry point into the series or wargaming in general, this is the one to pick up. Unity of Command 2 successfully builds upon all core design elements of its predecessor, which to this day still holds up.

Verdict
Unity of Command 2 is an excellent evolution of the series that retains, improves, and builds upon the already high quality of its predecessor.
9