The Hong Kong Massacre certainly isn't Hotline Miami 3, but it will just about do. 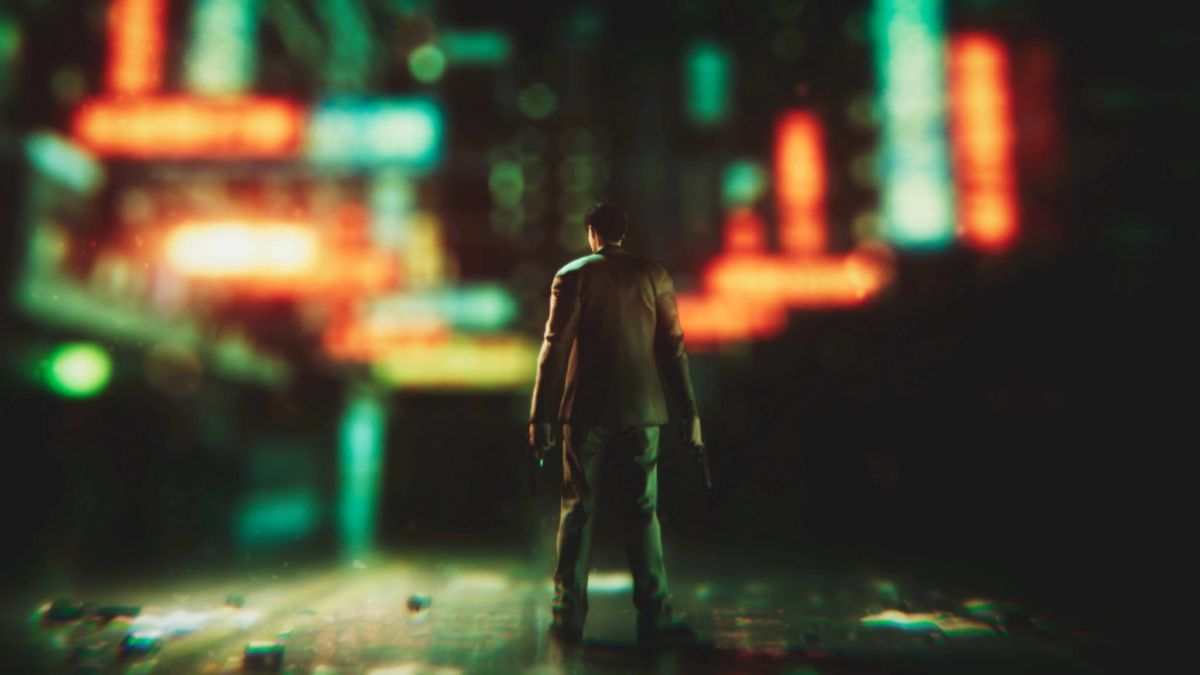 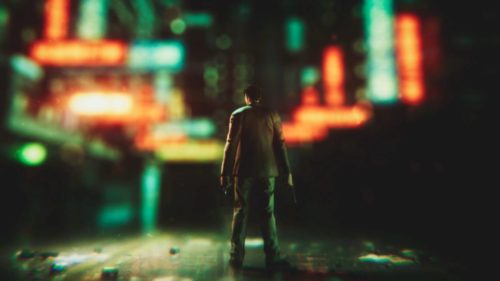 Top-down shooters need two things to succeed: gameplay that makes you feel like a demi-god and a challenge that tests but does not overly frustrate. Nailing both of those criteria, The Hong Kong Massacre is a mostly fun entry into the niche that Hotline Miami revitalised, which it also feels undeniably inspired by, but it’s a long way off matching Dennaton’s cult classics (or even something like RUINER) thanks to some uninspired design choices and a serious lack of final polish.

The main hook — all of the shooting and killing — is irresistible, it offering you the chance to crash through windows with a shotgun in hand and dispatch of a room full of goons in slow-motion bound to keep you enticed through its 35 levels. Anyone with an affinity for John Woo movies will appreciate the heavy nods to his work in terms of style; all The Hong Kong Massacre is missing is a flock of white doves and it could pass as an adaptation. There could be many times during a playthrough where you might find yourself reaching for the nearest pair of sunglasses, such is the feeling of cool that the game imbues — there’s really something to be said for sliding under shotgun blasts and returning the favour to your attacker as their bloody corpse goes flying. 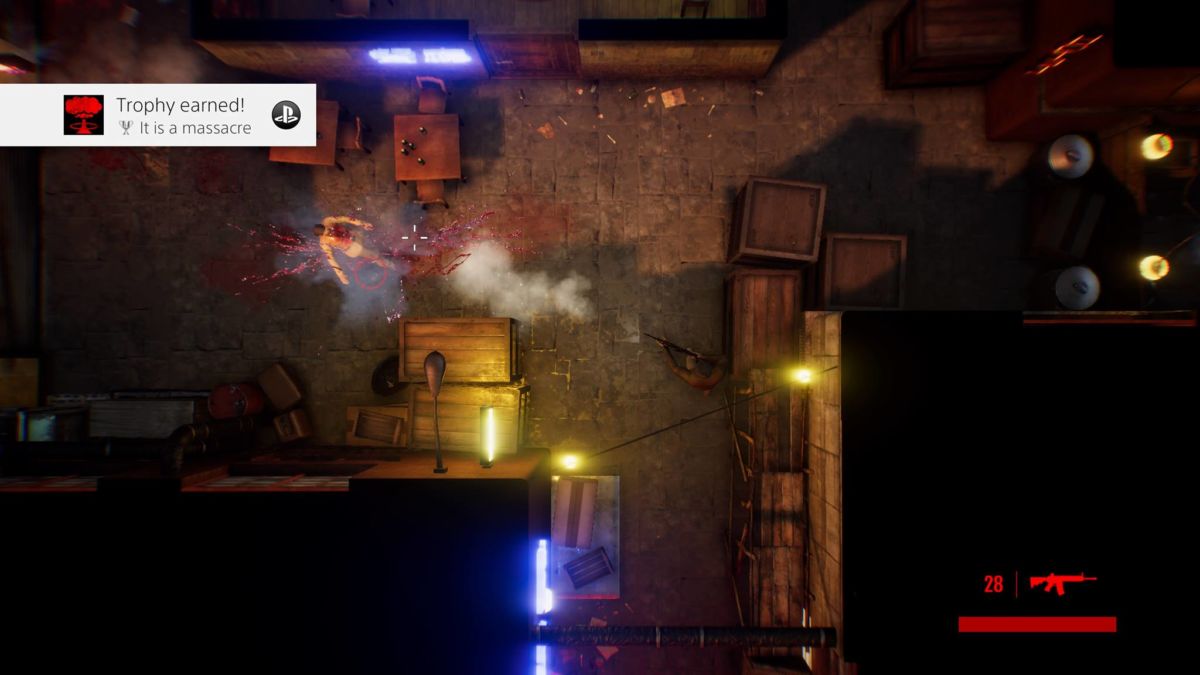 Harnessing a kill-or-be-killed mentality, The Hong Kong Massacre puts the player and their enemies on an equal playing field. One bullet is enough to draw the curtain for either, much in the same way as Hotline Miami. Vreski’s shooter, however, is even more frenetic with later stages almost impossible without the use of slow motion with bullets flying everywhere and diving the only way of dodging them. With sometimes over thirty enemies per level as things progress, there’s a lot of shooting to be done as you make your way through some admittedly pretty generic scenarios that quickly meld into one thanks to plenty of reused assets. While THKM is oozing in style, there’s a reason why fashionistas rarely wear the same thing twice.

The gunplay is the game’s strongest weapon, it allowing you to leap through the air and line up your shots before dispatching of a room full of bad guys. The spectacle of a shotgun blast exploding a door as you jump to safety before then shooting the attacker through a thin window is a small joy that never really gets old. To counter the intensity of one-versus-all, The Hong Kong Massacre lets the player known when they have a killshot with a small x appearing in their reticule, as well as diving providing temporary invincibility. It’s not a case of simply hopping around and firing ad nauseum as slow motion is finite and diving not something you can pull off in quick succession, meaning that while you may have dodged a bullet, are you simply sliding your way into the next one? The Hong Kong Massacre and games of its ilk are more like puzzle and rhythm shooters than mindless action: you have to plan ahead and learn the patterns if you’re to succeed. 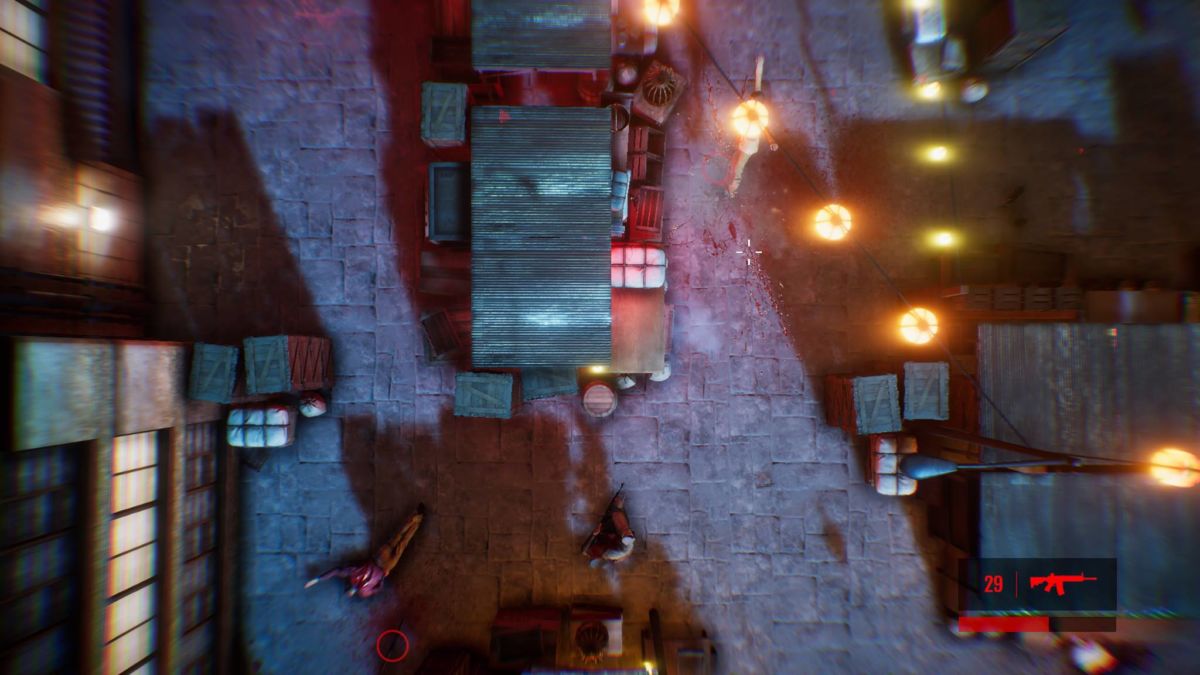 While there’s a bit of a challenge that may stump you as the game nears its conclusion, there’s not much here that should give you too much trouble if you’ve played the Hotline Miami games or RUINER. Enemy AI is fairly well-tuned, them not running at you like Lemmings but instead seeming hesitant to engage if they’re not in a great position. The difficulty it does pose can feel a little cheap, the game giving some enemies bulletproof vests that require two bullets to kill instead of one with them also able to roll around out of the line of fire. Slow motion will almost always see you through, however: it’s just a case of prior planning and learning enemy placement. Vreski seems to have gone for empowering the player to feel like a badass more than offering the kind of challenge that masochists relish.

Between levels, players are given the option to spend their earned points on upgrades for the four weapons available, which feels a little meagre, especially as two of them seem inadequate or lacking for most situations. Regular movement feels jarringly rigid, but upgrades can loosen things up and also give you higher rates of fire and bigger clip sizes. Completionists will appreciate the opportunity to replay levels to meet challenges that give extra stars, so there could be some added bang for your buck once the credits roll. 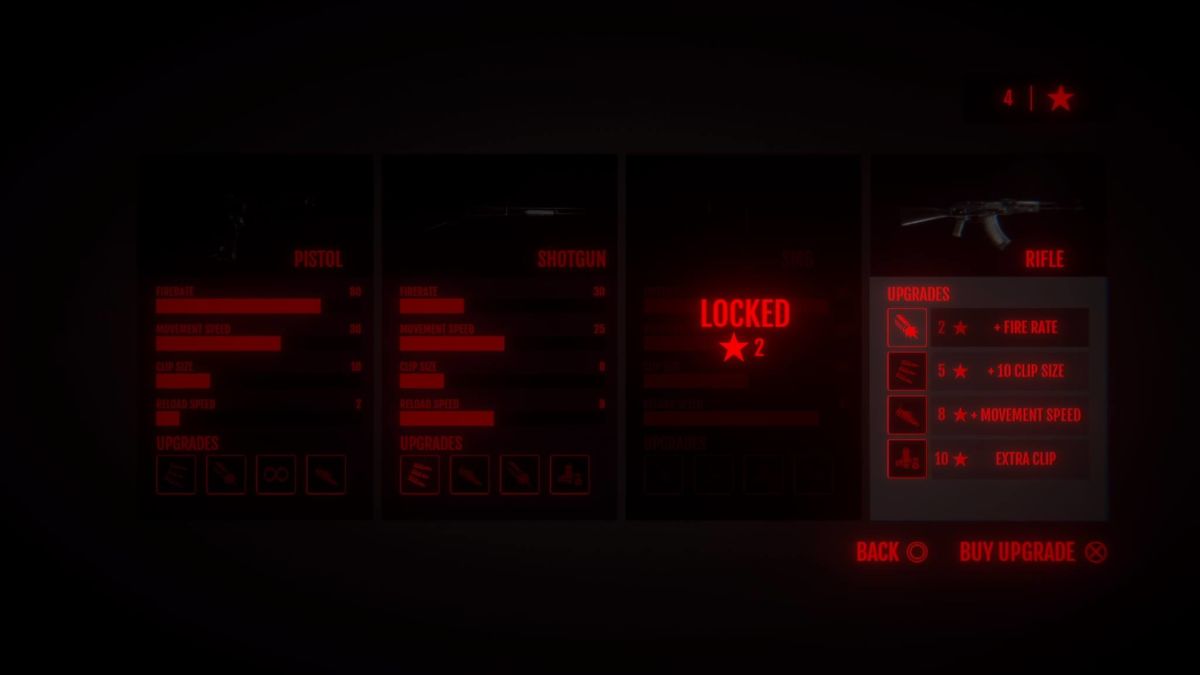 You’ll notice I’ve not talked about the story yet, and that’s because, well, there really isn’t one. John Woo’s movise will never be recognised as narrative landmarks, but they all (more or less) have something or someone worth caring about. That’s not the case with The Hong Kong Massacre, its cop protagonist on a quest for vengeance against the gang that killed his partner and that’s just about all you get. There are some significantly compressed and terrible-looking cutscenes without dialogue and then text conversations laced with typos to try and keep things moving along, but I would be hard pressed to tell you who anyone was or what happened at the end of the game. I’d given up caring long before I shot my last bullet.

Some typos can be ignored, but not when there’s such a constant stream of errors that entire sentences make no sense — even the options menu isn’t free from this lack of final polish with volume being misspelled as “volmume”. Perhaps this won’t matter to you, but this regularly severed my attachment and made me notice some of the game’s other failings. Boss battles, for instance, are the same fight rehashed five times with them actually being the easiest parts of the entire game. There were even moments where my character would dive and somehow find himself above all the action, or get stuck behind a door after a seemingly harmless leap.

While The Hong Kong Massacre has flaws aplenty, there’s still some fun to be had for a few hours. It’s certainly enjoyable in short bursts and will likely scratch an itch for fans of the genre, so it’s just such a shame that the lack of final polish and some uninspired design decisions hold it back from coming close to joining its peers as the best of their kind.

Verdict
Undeniably entertaining and often thrilling, The Hong Kong Massacre's chances of matching its inspirations are seriously undermined by a lack of care, variety, and an utterly lifeless story.
6.5