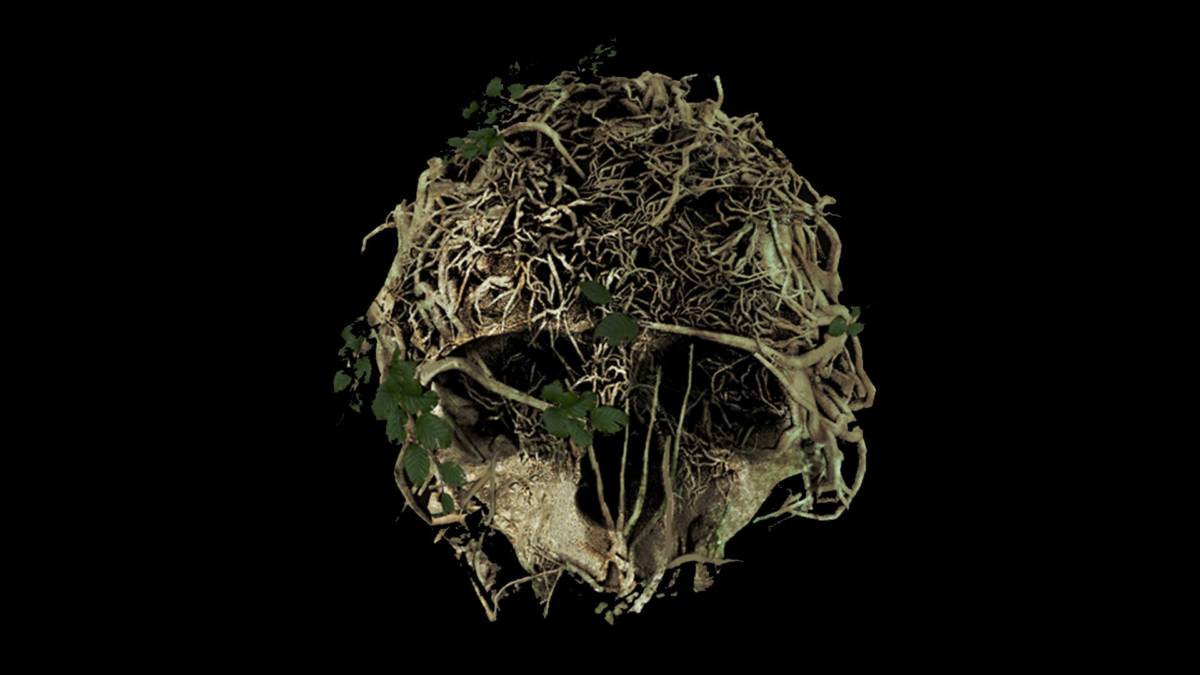 They are closing in, their numbers growing greater every day. The outlook is bleak for my survival. Therefore, the only option I have left is to just accept it and make chairs out of human bones and craft a totally vain zipline that does nothing. This has been the majority of my time with The Forest on PS4, role-playing a less dramatic version of Will Smith in I Am Legend and completely overlooking the fact that my protagonist’s son has been kidnapped — I’m sure he will be fine.

The long-gesticulating PS4 version of The Forest brings the PC cult favourite to a console for the first time and the transition is remarkably smooth. Having poured plenty of time into its PC version, The Forest stacks up well on PS4 despite some minimal hiccups and controls that could do with smoothing over. If you’ve ever wanted to play it but don’t have the PC specs, The Forest on PS4 is a more than competent counterpart. 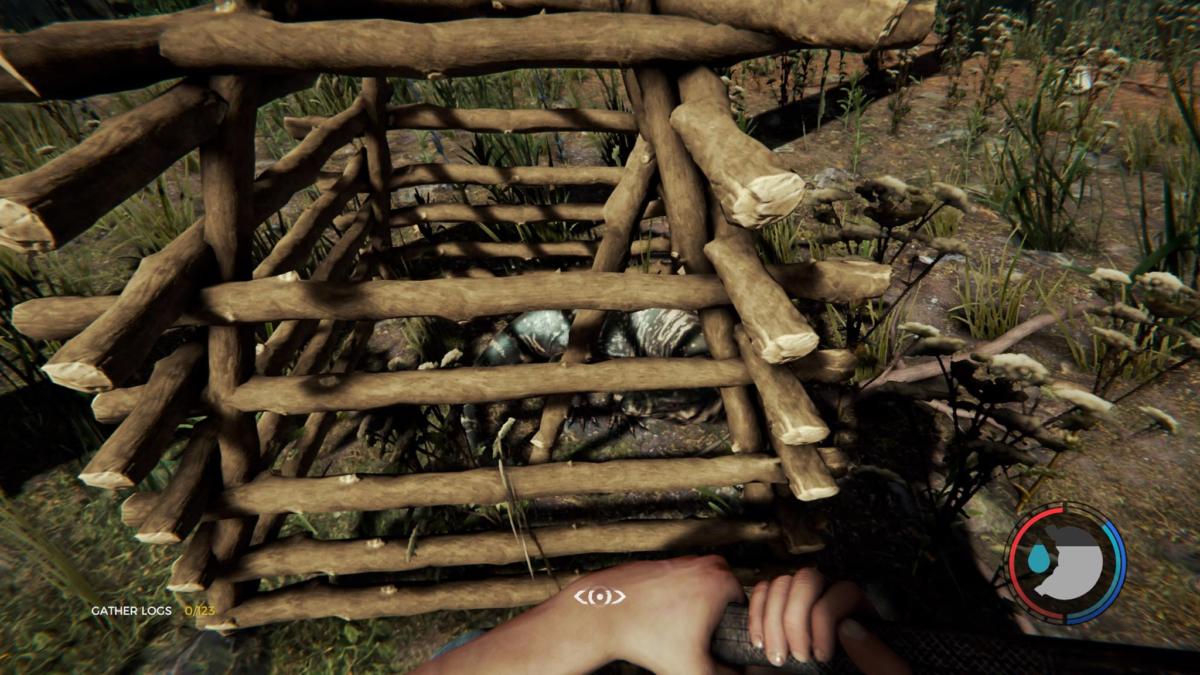 As mentioned, the storyline of The Forest revolves around your son, Timmy, getting captured by cannibalistic natives after your plane crashes on an unwelcoming peninsula. As the only survivor, you have to scrap to stay alive by building forts, hunting food, and also by making yourself a lovely little house in a tree. The storyline isn’t really the main hook of the game, it’s the supremely polished survival action instead. The game never really rushes you to go after Timmy, which is reflected in the fact that it never spells out what you have to do to save him. The Forest is all about exploration and experimentation, its story included.

You are free to roam around the island as you please, collecting herbs for mixtures or felling trees to create defences. This is The Forest possibly at its purest, its world so well-made despite the tiny development team that you constantly have to rein yourself in from going off on your jollies. You’re not alone, evidenced by the blood-curdling shrieks that seem to come whenever you dare to pretend that you’re safe. While I would struggle to call The Forest an out-and-out horror game, it features moments that stopped me dead in my tracks more than any zombie trundling around a mansion ever could. 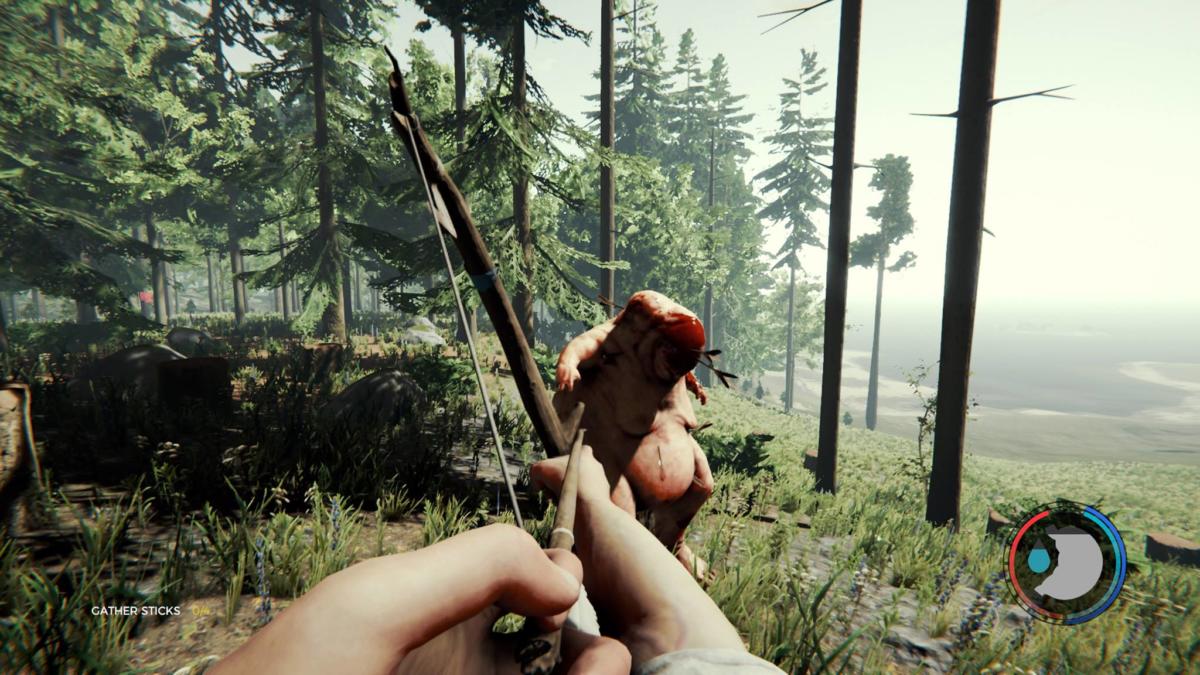 The natives of the island are an eclectic bunch, to their credit. The grunts, who are by all accounts just normal people who like to nibble on other people, will be your most frequent of encounters, though there’s a case to be made for disengaging from every fight you can. The more of them you kill, the bigger the enemies they will send after you. I now have to make my way past what appears to be Shinji Mikami’s nightmares any time I want to explore with mutated blobs of limbs and creepy spider creatures eager to lay their hands on me. It’s a dilemma you will have to weigh up yourself: do you kill indiscriminately and earn plenty of crafting materials or do you try to play as pacifist as possible?

Taking on the natives is more complex than it would first appear. While some of they may charge at you suicidally, the reactive AI makes every encounter an intense affair, like a Mexican stand-off sans the guns. If you’re chopping down a tree and hear the grunts of a tribesman, it does not necessarily mean that they will be trying to gut you in the next second. Sometimes they’re cautious and just want you out of the area, other times they’re trying to figure you out and even where you’re based. Often, you don’t even know they’re there — they are quite keen on moving between trees and coming out of nowhere. If you take on a group of them and kill the majority, a survivor may try to run away and warn their friends. It’s just about the best application of combat in any survival game. 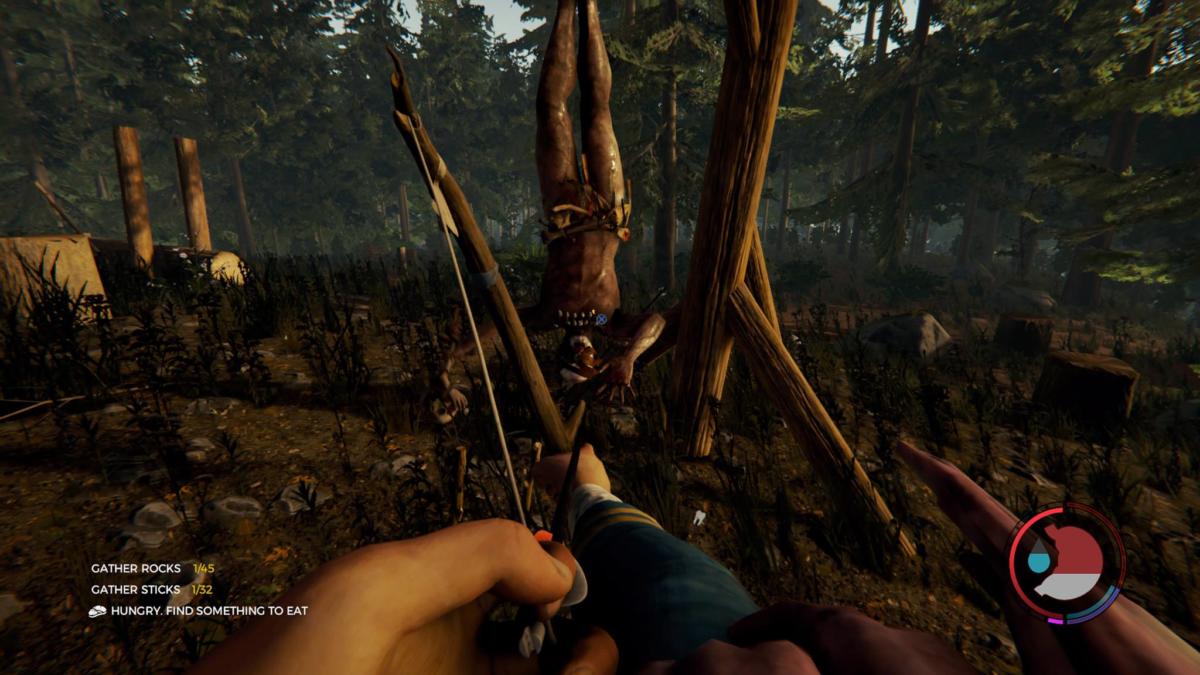 While your multi-purpose plane axe will be your crux for most of the game, you can always craft alternatives. The Forest is wise to not make its crafting “recipes” too opaque and attainable for most. You will be able to make yourself a bow fairly early on and even set up some traps with half a day’s worth of farming. My personal favourite was one that ensnared any human attackers and left them to my mercy, though I was surprised to see them still take a swing at me when I went in for a closer look. However, it’s not always enough as there can be some overwhelming numbers to contend with, especially if you are playing aggro and making your life harder. When that happens and you end up hitting the deck, you don’t die. The natives capture you instead, which is when the game becomes a primal and unnerving delight. You have to find your way back to the surface with the faint glow of your lighter to guide you and plenty of things that go bump in the night to contend with.

As far as The Forest being a pure survival experience goes, it’s somewhere between the casual fun of something like Conan Exiles and the oppressive but engaging Green Hell. You don’t have to constantly eat and stay hydrated and it’s honestly never much of an issue to find resources — there’s flora and fauna in abundance. The building mechanics are also simple and implemented ingeniously: a “blueprint” of the thing you want to craft will appear and becomes fuller the more materials you add. As something like Fallout 4 proves, building on consoles can be an exercise in patience with it not translating all that well, but The Forest on PS4 makes the jump with ease. Endnight Games have smartly and intuitively incorporated keyboard controls for a DualShock, even if I have to question why you control the lighter with right on the d-pad despite it appearing in your left hand. 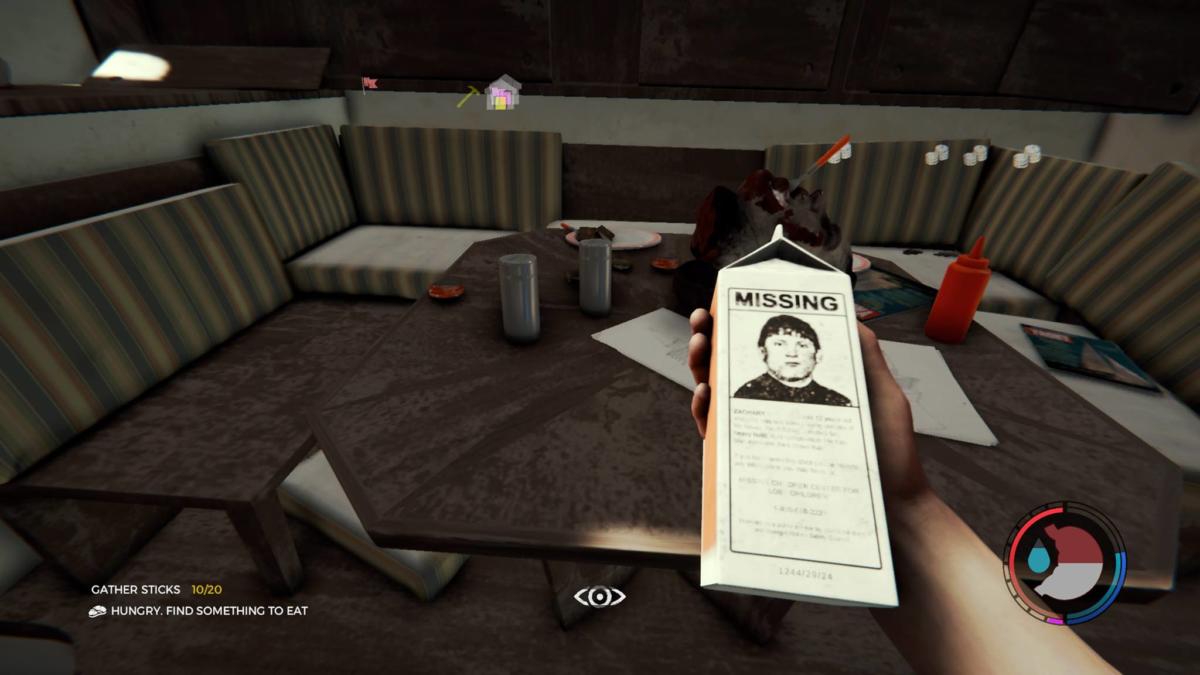 The Forest is, however, one or two patches away from being at its best. Nothing is particularly damaging to its cause with some screen-tearing and noticeable frame dips at random intervals being the worst of its issues in terms of performance, but perusing the Survival Guide is like having to flick through the bible on a controller. As the place where you find tasks and crafting blueprints, you will have to be delving into it frequently, which makes having to repeatedly hammer L1 and R1 to go through it just an outright pain in the ass. This may not seem like a major qualm, but it does become one when you will be spending so much time with it. 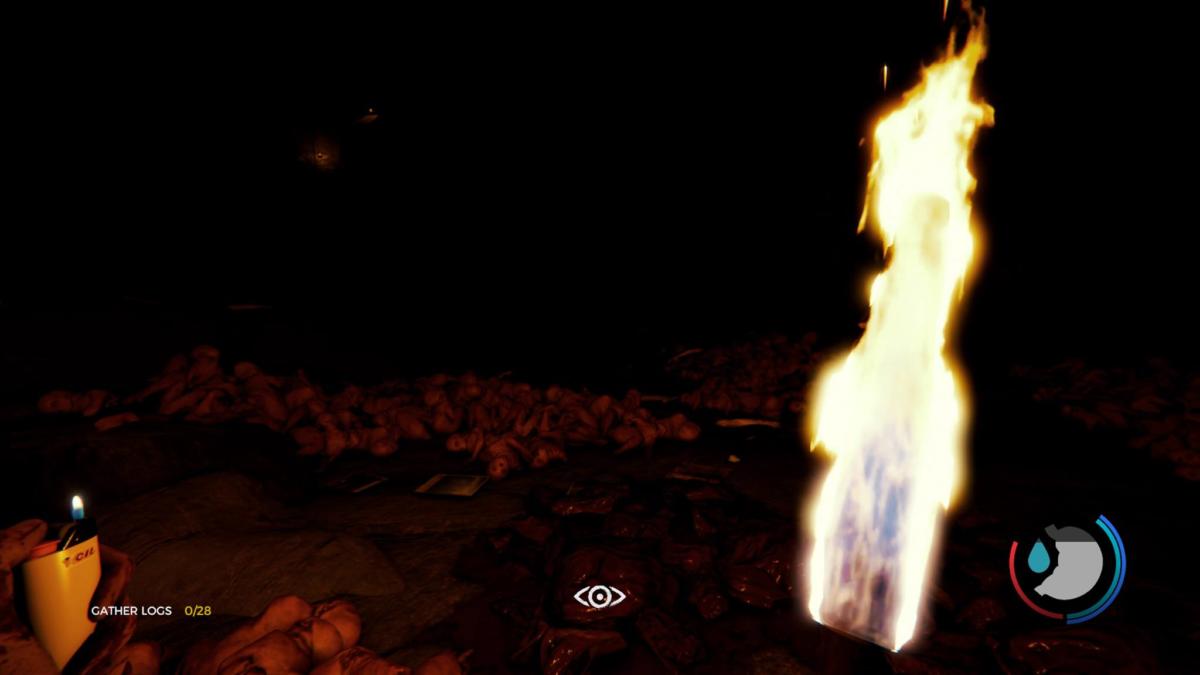 Likewise, the multiplayer needs some ironing out. There have been a few times for me where the game has pseudo-broken and not loaded anything when just trying to set up a match. It’s also worth noting that there is currently a bug that doesn’t properly show public multiplayer sessions to join, though The Forest has always been a game that’s better with actual friends. Having sunk many hours into co-op on PC, it’s probably the best way to play the game, so bear that in mind.

Any issues I had with The Forest didn’t stop it from becoming the definitive survival experience on console in my eyes, however. If you’re yet to try the game on PC, its PS4 version is a surprisingly sleek and arguably just as rewarding time-sinker that won’t even make you feel bad for being a terrible parent. Sorry, Timmy, I am one with the trees now.

Verdict
A smart port of a PC cult favourite, The Forest on PS4 is simply one of the best survival experiences you will find on a console. Microtransactions: none
9