Supergiant’s Hades And The Never-Ending Story of the Gods

Life inside a myth. 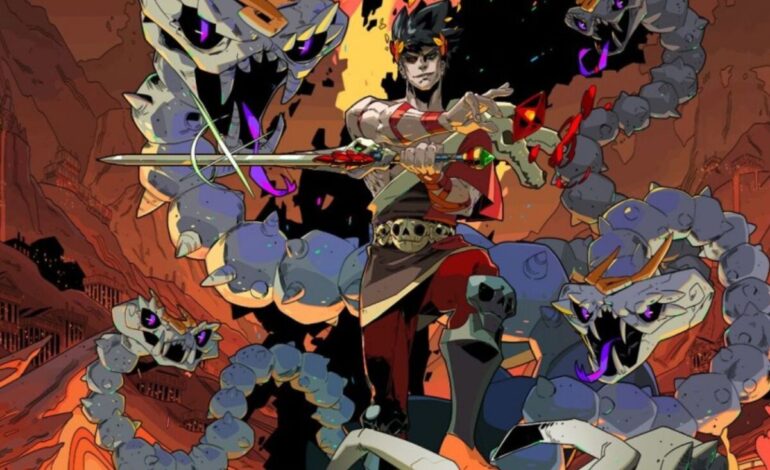 This article contains mild spoilers about characters included in the game Hades. No details of the game’s ending are discussed, but character names and traits are, so read at your own peril.

Hades, the roguelike tour de force from Supergiant that has blasted onto the scene with the force of a bolt from Zeus, has inspired devotion through its tight controls and rewarding combat, as praised in our review. Within the maddening hack-slash-dash rounds of gameplay, Hades is also a story about family, about missed connections across generations, and about discovering your parents are flawed people.

The game’s structure and story complement each other: Hades is a game about cycles, and the weight of being immortal, having all of eternity to struggle at a seemingly-impossible goal. By centering its narrative in the Underworld, and populating its world with legendary mythic beings at the end of their lives, Hades gives its characters total perspective over their pasts, and lets them reckon with what it means to go on after the ending to their respective stories.

One aspect about world mythologies, and the characters within them, is that they are far reaching, often contradictory, and never-ending. Many mythologies have “end of the world” stories like the Ragnarok of Norse mythology (which has inspired the next installments of both God of War and Assassin’s Creed), or Christianity’s Book of Revelation, but there’s never a concise, all-encompassing timeline. In Greek mythology especially, time is long and history is wide — there’s always room for any number of adventures and new stories. 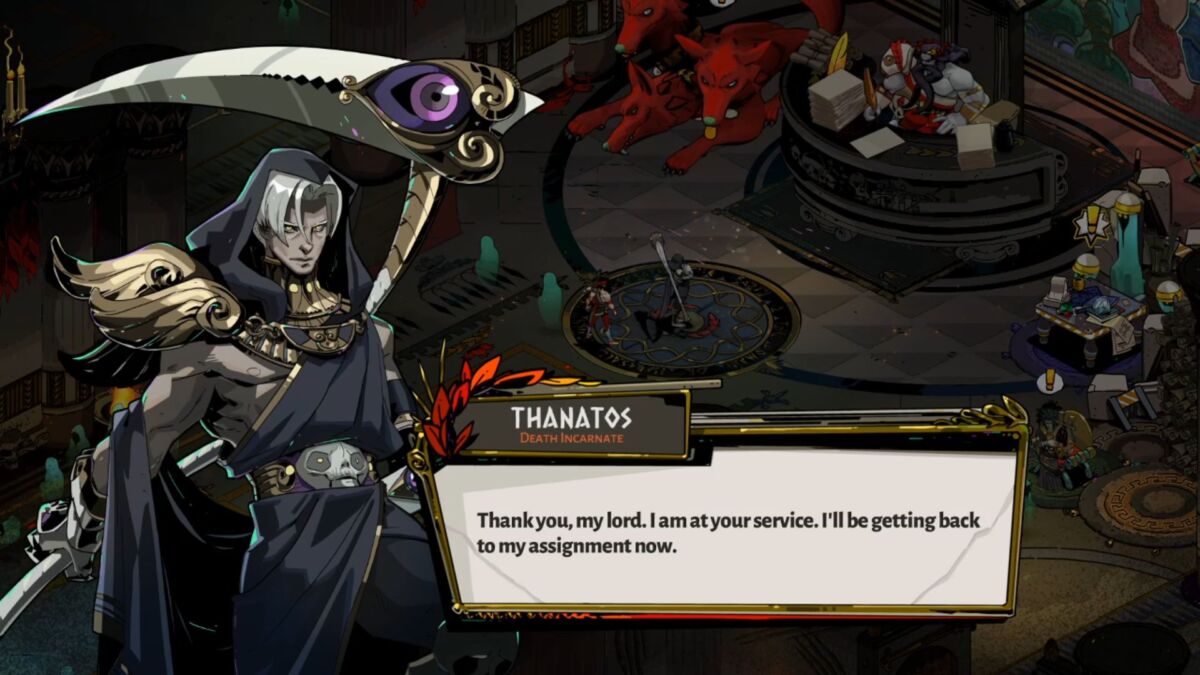 Even when mortal characters like Achilles die, they can still be present in other stories, since in Greek mythology, death and the Underworld can be traversed with extreme heroic effort. Since death is not the end for the mythical Greeks, characters’ stories never have to have a proper ending, a concept that Hades leans into by taking place within the realms of the dead, and any mortal character you meet already an indeterminate number of years into their new eternal status quo.

Our protagonist, Zagreus, is the son of Hades and as a child of the God of the Dead, death itself is ho-hum for him. The eternal slumber where all mortal souls reside is, to Zagreus, just his boring old home town, and he has to get out of here if it kills him (repeatedly). For all the hard rock and metal in the soundtrack, the game’s story is equal parts My Chemical Romance-flavored emo youth revolt and Bruce Springsteen-style bright-eyed escapism and hope for a better future.

Zagreus as a mythological figure actually has very little established lore associated with his name that’s survived the ravages of time, making him one of the few characters in the game with a somewhat unknown fate. His journey is about his future whereas everyone else he meets is embroiled in their past. His path upwards brings him into contact with more well-known Olympian gods like Aphrodite, Hermes, and Zeus, who grant you boons in combat and always send words of encouragement your way. These characters do have a great deal of literature establishing their personalities and their domains. Dionysus, god of wine and revelry, is a drunk uncle. Artemis, goddess of the hunt, is brusque and less polite than the others. Athena, goddess of war and wisdom has lots of advice to give. And, true to their source material, alllll of the Gods are insecure, selfish, and egotistical.

(Slight tangent, but it’s also kind of funny that all these Greek gods have British accents, despite existing for eons before anyone had ever heard of or thought of a concept called ‘England.’)

Occasionally, Zagreus will enter a room and find two boons from two separate gods and have to choose. Whichever God he doesn’t choose will throw a hissy fit and sic enemies on you to fight off for the crime of wounding their pride. These temper tantrums make sense when we remember the never-ending nature of time for immortals. These gods have been the same age forever, so they’ve never had to grow up and mature. The gods, with all their power and influence, are spoiled and entitled, because of course they are–why wouldn’t they be? They have absolute power and people literally worship them.

The gods’ immortality and the scope of their perspectives is also reflected in Hades’ gameplay and progression. In most video games, the player learns and adapts as they make attempt after attempt at challenging levels, and sometimes a player’s character will also know that they’re caught in some kind of loop, but usually that’s the extent of anyone’s awareness. In Hades, however, the accumulated time of all these failed escapes is known everywhere you go. Because everyone is an immortal deity, “death” doesn’t have to mean what it usually does.

The entire Underworld grows and changes the more times you try to storm the gates, and the gameplay loop of journeying out, dying, and repeating isn’t actually a loop in the traditional sense — it’s more like the loops in a roller coaster, cycling you forward even as it feels like you’re spinning in place, lost in the sound and fury of combat. Death in Hades is frustrating for you and Zagreus both, so when you mess up a run, you are both feeling the exact same sense of frustration at your lost progress.

While the boon of immortality means the gods never have to grow and learn, these deities aren’t the only beings you meet in Hades. Zagreus can also meet and build a rapport with various mortals of Greek mythology as they wander through their infinite remaining days. Sisyphus, cursed to eternally roll a boulder uphill only for it to roll down again, has become a pretty chill guy, comfortable and motivated by the stability of his daily routine. His peace of mind is a good guide for the players — enjoy the repetition, because there’s going to be a lot of it, but that’s what makes the game fun.

Orpheus and Eurydice, doomed lovers who famously almost escaped the Underworld themselves and were only thwarted at the last moment by Orpheus’ impatience to see his love again, also appear in the game. Their relationship has understandably been made rocky by the whole “failing to escape the Underworld because Orpheus was impatient” thing. While Orpheus is wracked with guilt and perpetually down in the dumps, obsessing over his broken heart, Eurydice just does her best to leave it in the past. The two of them have a very nuanced look at what happens after their well-known story ends, and their sidequest is one of the most rewarding story paths in the whole game.

Speaking of pairs who were together in life, Theseus and the Minotaur also make an appearance. In their original stories, the Minotaur (or, going by his actual given name, Asterius), was a hulking monster, with the body of a man, the head of a bull, and a terrible hunger for human flesh. He was sealed in a massive labyrinth, into which human sacrifices would be dumped for Asterius to feast on, until the mighty hero Theseus, one of many “Main Characters” in Greek Mythology, slew him. While in life they were enemies, death seems to have calmed the waters between man and beast because now Asterius and Theseus fight together. Apparently impressed with each other’s might, the two of them have pulled a classic pro wrestling angle and gone from bitter rivals to the best of friends, showing that even for the greatest of heroes and monsters of myth, “death” is not an ending so much as a change of circumstances.

The story of Hades doesn’t undo or contradict anything from myth, but instead builds on all that came before. The game is giving small sequels to these great mythic characters, shining light on what would happen to them next, after the poets turned away to tell other stories. Just because a character has finished one chapter of their life (like, say, the “living” chapter) doesn’t mean the adventure has ended, or that a person has stopped growing and changing. On a long enough timeline, for people who never age, any amount of growth is possible.

Hades is, at its heart, about perseverance, about not accepting the hand you’ve been given by fate, and pushing forward as many times as it takes. What might feel like the end doesn’t have to be — so long as you can get back on your feet and try at least one more time. Once you complete an escape for the first time, without going into spoilers, you get a reason to try again, and again, as often as you can muster, because while Zagreus is born of gods, he actually has more in common with the mortal souls he encounters in that he is willing to adapt, change, and grow with the changes. Through the player’s actions, he keeps trying, takes different paths, picks up different weapons, and learns from his mistakes.

By building on myths and making a new story that branches off everything we think we know, Hades successfully gives us this perspective at life inside a myth, or maybe instead, life after all the myths have been done. So what comes next exactly? For Zagreus, and for the player, it could be anything.

A Switch key was provided by Supergiant for the purposes of coverage.