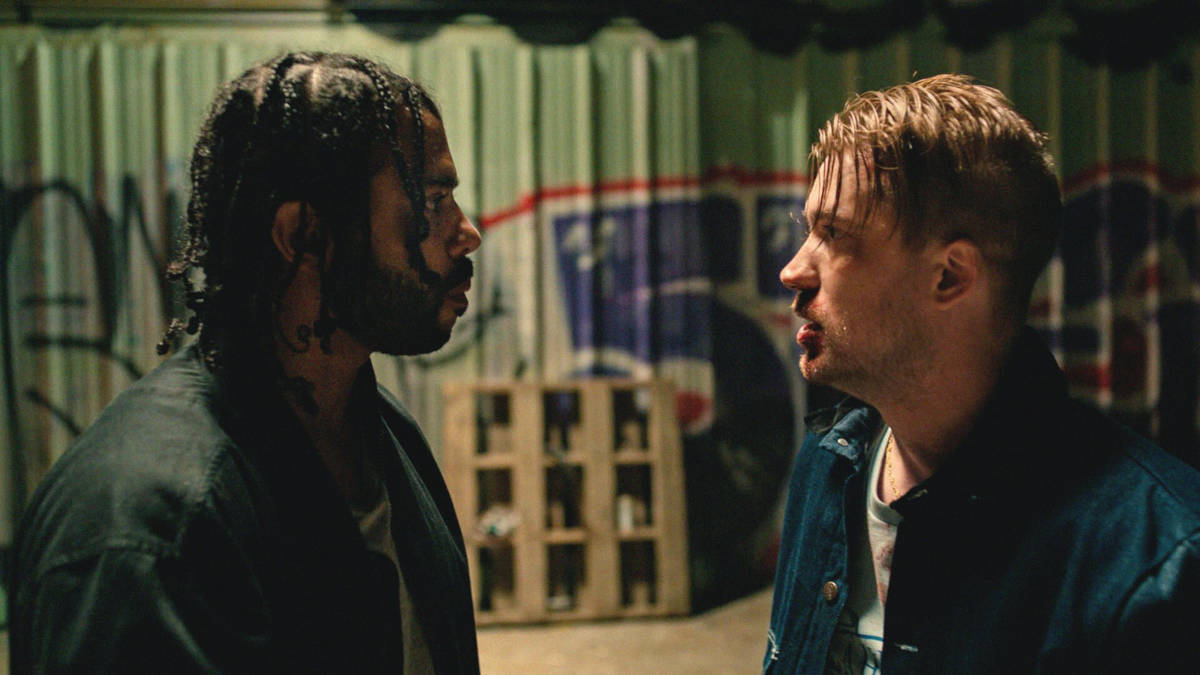 Daveed Diggs and Rafael Casal appear in Blindspotting by Carlos López Estrada, an official selection of the U.S. Dramatic Competition at the 2018 Sundance Film Festival. Courtesy of Sundance Institute

Blindspotting is one of those films in which one knows that they are watching something magical take place and that’s the beauty of the Sundance Film Festival. The colorful film is the product of two friends who both share the same hometown and, as tends to be the case with many indie films, the road has been quite a few years in the making.

Carlos López Estrada directs the film from a screenplay written by Rafael Casal and Daveed Diggs, both of whom were cast in the leading roles of this Oakland-set film that provides much-needed minority representation on screen. Make no mistake either, Diggs is a definite star-in-the-making. His character, Collin, freestyle raps at times during the film in a way that reminds one of the Hamilton soundtrack–interestingly enough, Diggs originally played the role of Marquis de Lafayette and Thomas Jefferson in the hit musical.

With three days remaining on probation, Collin is hoping on a second chance at life. Working for a moving company with his best friend, Miles (Casal), the two have come to a realization that their neighborhood in Oakland isn’t the same as it used to be when they were growing up. They help one artist with moving, whose art makes a point of just how much has changed throughout the years.

Collin is just doing his job when he sees a black guy being chased by a cop.  A few gunshots later, Collin witnesses an unarmed man shot dead by a police officer (Ethan Embry), who pretty much becomes the film’s villain, and he misses his curfew.

As Collin focuses on getting his life going in one direction after breaking up with Val (Janina Gavankar), it’s Miles who doesn’t make it easy for their friendship as his life spirals out of control. Miles is in a relationship with Ashley (Jasmine Cephas Jones) and she wants their son, Sean (Ziggy Baitinger), to attend an expensive bilingual school.

A well-directed film, there are some shots that really draw out the emotional beats in moments that go a way that’s not completely expected but not altogether surprising either. There’s a moment late in the film, not to ruin anything, that not only hits the beat it needs, but the direction, camerawork and Diggs’ acting mesh together for the perfect image.

While it’s true that there are not enough films with people of color being represented, the 2018 Sundance Film Festival provided no shortage of films with people of color in leading roles. It’s important not only for the industry, but to inspire future filmmakers of color. There’s a market for these films, but it’s a matter of the studios realizing that they can’t ignore a demographic.

Just as Lady Bird was a love letter to Greta Gerwig’s hometown, Blindspotting does the same for the city of Oakland. The film offers a representation that wouldn’t necessarily be represented on screen, but it’s a story worth telling and does it more so as a buddy comedy amid such a serious subject of race and class.

A selection of the Sundance Film Festival, Blindspotting premiered in the U.S. Dramatic Competition program.