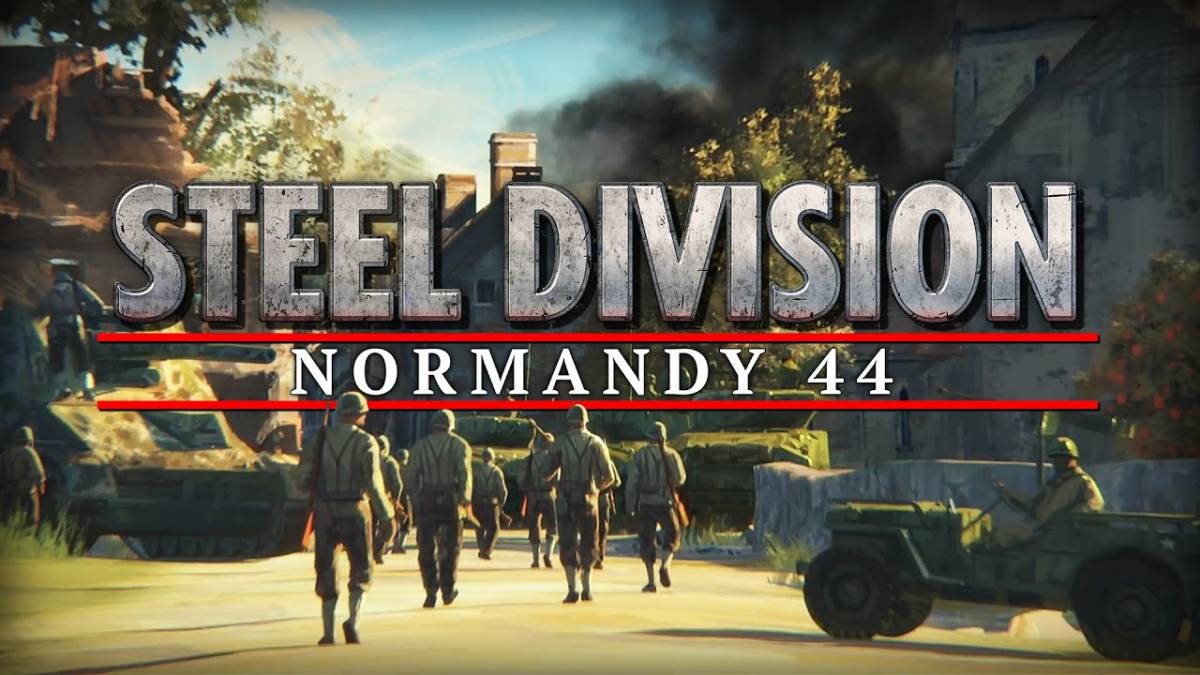 Eugen is back to form with Steel Division: Normandy 44, its spiritual successor to the Wargame series. After a brief and ultimately failed attempt to chase some e-sports success with Act of Aggression it is nice to see the developers back doing what they do best.

During the mid to late 90s there were basically 2 contrasting camps of strategy games on PC. Fast based arcade action a la StarCraft and Command & Conquer where you pushed out as many units as you could and more or less wanted to swamp the enemy and smash him to claim victory. The other camp had the slow, more realistic games like Steel Panthers, Close Combat and Final Liberation, games where you had a limited number of units and often also limited munitions for these units to use in a single battle. The battles were often long and slow and tested your ability to try out different plans to tackle the AI while retaining as many of your units as possible.

The gamers of both sides mostly looked at the other with suspicion and sometimes even contempt; they often did not play nice together. Fast forward to 2010 and Eugen releases RUSE, a charming but flawed WW2 strategy game on both consoles and PCs; its biggest legacy today is that it laid the groundwork for the Wargame series. What makes these games special in my eyes is that is manages to combine the fast paced action of RTS games with the nail biting tension of something heavier like Close Combat.

Steel Division further builds upon this style and as the name suggest it is set during the liberation of France in 1944. Just like its predecessors Steel Division retains a good balance between realistic simulation and arcade action. Units are precious and you simply cannot produce new tanks once you lose them instead you compose a battlegroup before your battle and choose what units and reinforcements to bring. During the battle you earn requisition that you can spend to get units from your battlegroup. Once you have lost all units in your group there are no more to call in, no matter how much requisition you have.

Composing the battlegroup is key to success; if your enemy has a lot of heavy artillery you need something to counter that, or if they focus on air power you need AA guns or fighters to keep them at bay. Each mission and battle are divided into 3 phases. In Phase A you are mostly restricted to light recon units and obsolete tanks and infantry, while on the other hand in phase C you get access to the heaviest bombers and tanks – if you put them into your battlegroup that is. Balancing the phases becomes a big part of the army building since each unit has a phase associated with it. Do you concentrate most units in A and hope to overwhelm early or do you wait until the heavier stuff gets available further into the battle? This means that even before you start a mission or skirmish you have to plan and think ahead on what you will do, and this kind of mind game I find really engaging and fun.

The battles themselves focuses on morale and positioning. The hedgerows of France lend themselves well to cover and you better take advantage of it to spare your precious units. All units have a meter for stress, a meter that when full forces them into a pinned state. A pinned unit can be forced to surrender if it is surrounded and alone. To save them you have to use a fallback command which makes the unit run back to a safe area.

This emphasis on morale makes the battles flow back and forth in a very tense and fun way. It is very difficult to simply “tank rush” even a small group of units, instead you do best in setting up different types of firing positions and using support fire from machine guns and artillery. Tanks are scary and can pack a serious punch, especially the heavier German models, but they are also vulnerable to close combat fighting with infantry units. The whole mechanic can be used strategically as well, send a unit forward as bait and when it gets bogged down let it fall back in the hopes of drawing out the enemy to a carefully laid ambush further back. There aren’t really any super weapons that can stride onto the battlefield and take command all by themselves. If it all sounds complicated, Steel Division’s well-designed tutorial takes care of explaining the basics pretty well.

I really like the way that all these systems and  lends themselves to experimentation. If you get your back flogged raw by the AI or other players there is usually something you can take away from that and implement it in rebalancing your battlegroup or rethinking when to use what and how. Can I give my units more cover? Can I rearrange the reinforcements so I get something heavier faster? These are all questions I find myself asking both after failed and successful missions.

This replayability is also very welcome since the weakest part of the whole package is the single player mode. It is not bad per se; the missions are well designed and fun to play but we are treated to 3 campaigns, two for the allies and one for the Germans, and a mere 4 missions each. After that there is skirmish against the AI before you are cast to the wolves in the multiplayer. At 40 dollars it might be too much to ask for an expansive and sprawling campaign, but I would like to see Eugen really focus on single player for once in these games. There is Steam Workshop support but I am not holding my breath for community made single player content anytime soon. 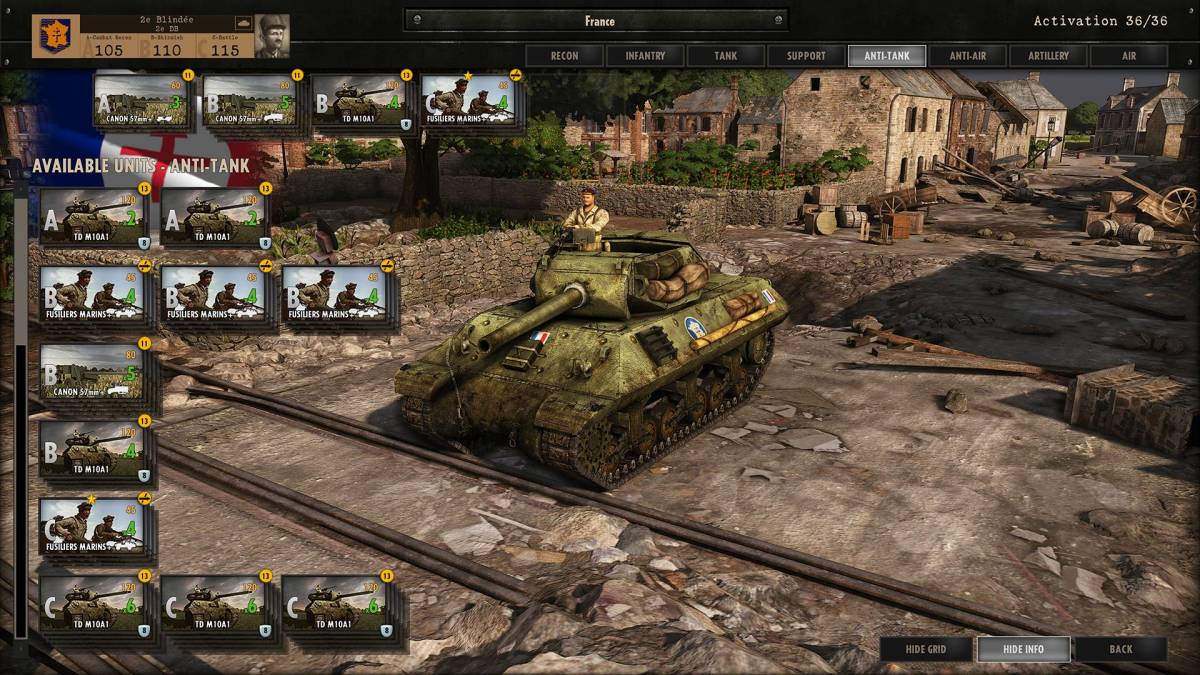 Multiplayer is fun and focuses on overall battlefield control; there are no control points to hold but the side that holds the most of the map earns points towards a set victory condition. I do miss the epic 10v10 clashes of old though, both because they were fun spectacles to watch and play but also because the pressure on you as a new player is much lower when 9 others are on your team. Steel Division settles for 4v4 battles instead. As more and more often is the case these days I sadly have to recommend people close down the chat, it can be a very disturbing and dark place at times with armchair historians and with a game where you can play as Nazi Germany, well you can take a guess as to what kind of discussions that brings to the table.

Steel Division won’t impress you graphically but the attention to detail in the units and the French countryside does give it a nice look design-wise if not in raw graphical power, and a full bombing raid with heavy bombers does look pretty impressive. Likewise the sound is also good but it’s nothing you will be calling your friends over to come and check out. Despite all this I have to say that I do like the look and feel of this game. The seamless zooming from grassroots level up into a zoomed out map view really makes for a nice effect as well as a practical tool to get an overview of the battlefield. The fully zoomed out view also makes you feel like you are in some war room looking at models representing battles and troop movements, something Eugen have been good at ever since RUSE.

The deck deck/army building function is also easier to understand and figure out. I don’t think there has actually been much of a change under the hood but the visual representation makes it easier to follow and understand. You clearly see stacks and numbers and can fairly easily determine if this is a stack of many units or a smaller one. While the map design is good and makes for really fun and engaging battles I do feel that the setting limits them somewhat. How many World War 2 games have we seen set in the French countryside over the years? There is only so many hedges and fields one can see without it feeling a bit too familiar. 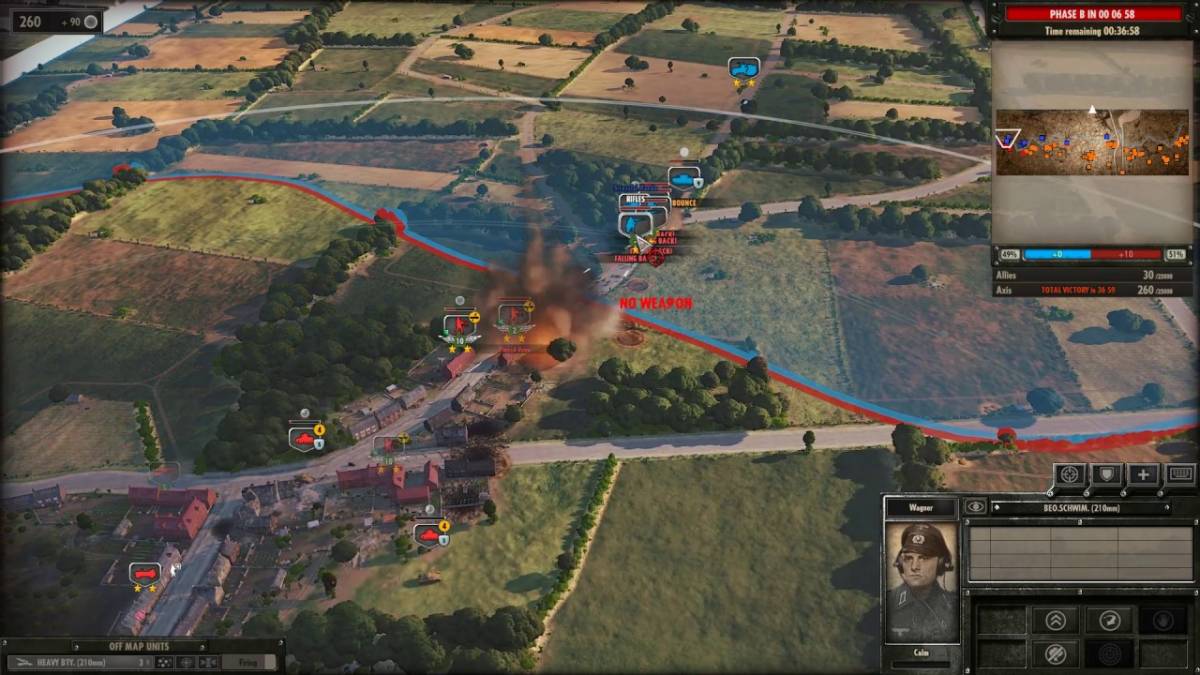 For as fun as the gameplay and the tactics are to use in the game, I really hope we will get some expansions or DLC to expand the theatre a bit. Perhaps even visits to some of the less known battlefields in China, Africa or the Pacific Theatre. I also think the more linear structure of the campaign is a step back from the dynamic campaigns of Wargame: Air Land Battle and Red Dragon, they were not perfect but I must have spend some 3 or 400 hours playing them in total. In Steel Division there is some carryover from mission to mission, dead units stay dead and captured supply trucks can be used in the next battle for instance, but since there are only 4 in one campaign there really isn’t much time for it to have any real impact sadly.

With all that said though, Steel Division is fun and addicting. I can hardly wait for the next time my son goes to bed so I can try out some new unit compositions or if I can manage to get those Pak40 guns into a better firing position and finally take down my enemy in a flanking maneuver.

Verdict
Very fun and engaging RTS that fans of the series should not hesitate to buy. However, like the Wargame series, the campaign leaves something to be desired in its lack of content.
8
Cultured Vultures is a pop culture website established in 2013 covering all things gaming, movies, and more. We eat your words.
All The News On The Biggest Games