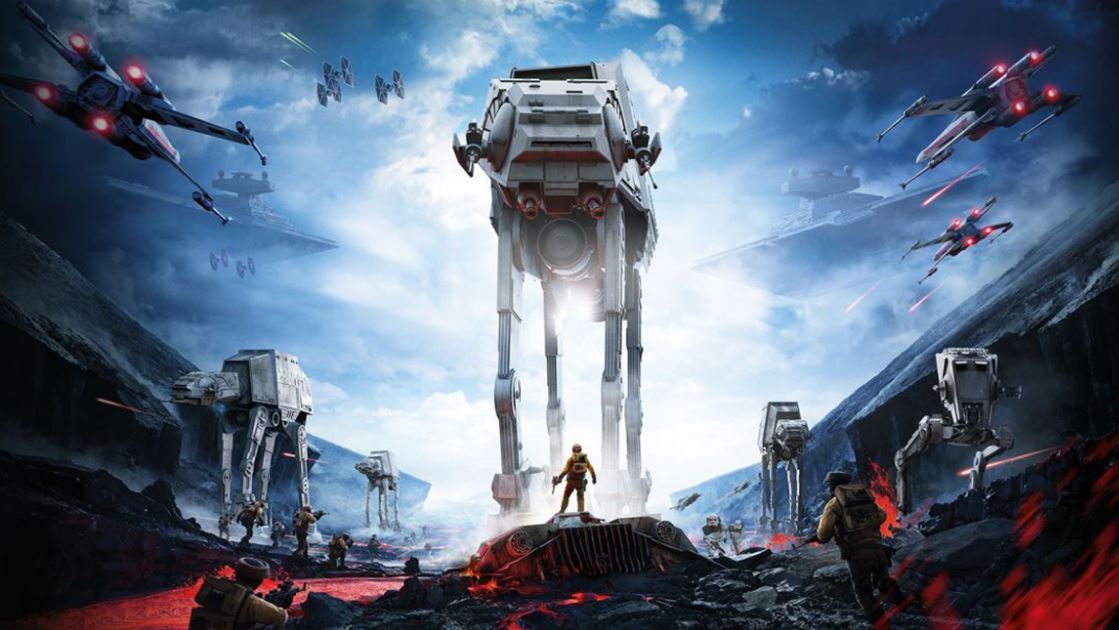 Ah, EA, you crusty old sore on the face of gaming.  Never has a company engendered more hate or vitriol in the community, and yet we keep on giving you all our money.

Even when ‘Battlefront’s ridiculous “Season Pass” cost more than the game itself, we still flocked to stores or smashed our bandwidths downloading it – because it had the ‘Star Wars’ name on it, and the trailers looked awesome. When rumours were going around that EA had paid celebrities to give favourable reviews, we weren’t surprised, but we still bought the game. EA has a hold on us, because it has something we want, and we’re prepared to pay through the nose for it.

So what of the game itself?  Well, I was a fan of the original ‘Star Wars: Battlefront’ and ‘Battlefront 2’ on the PS2, and it simply doesn’t compare. The running and gunning is fine, and the online modes are pretty good. The dogfighting is awesome and gives you a real sense of what the battles would have been like. Except that… that’s all there is. It has little variation – it’s fun for an hour, after which it just becomes repetitive. There is no real replay value unless, unlike me, you get a sense of achievement from repetitive grinding.

The ‘single player’ mode is the most depressing thing I’ve seen in gaming for a while – and I paid full-price for ‘No Man’s Sky’. Three little sub-missions that have little in the way of objectives or content – like tech demos rather than an actual game. I genuinely felt like I’d paid full price for half a game, and as someone who prefers their gaming experiences to be solitary, it wasn’t the half a game that I wanted.

So, what do we do to improve upon what was a very polished-looking but overall unfinished and uninspiring game?

The obvious answer is to stop working on the art assets – I don’t see how much can have improved – and actually add some more gameplay. Give me something to get my teeth into, something I can enjoy without feeling like I should be in a cubicle doing it, wearing a humorous Darth Vader tie.

A few suggestions from me, to DICE, for free:

The all-out heroes combat from BF2 on the PS2.
Set in the Mos Eisley cantina, with that horrifyingly catchy song playing throughout, this was great fun in local multiplayer, hunting down your friends for some brutal lightsaber combat.

The return of space battles
They were intense, it was great to be out pummelling your enemy’s bridge with torpedoes, then a warning flashed up to tell you your own capital ship had been boarded – a real adrenaline rush and amazing fun once you got the hang of the controls.

Some type of campaign
Multiplayer is great for those who are into it, but as a bearded hermit, I prefer to re-enact the battles from a fictional movie franchise alone.  When all I’ve got is a few training missions, I soon get bored of it, but then I sign on to the online system and am immediately mugged by seven guys who have been playing since day one, and are therefore better than me. The ones who know each map better than they know the street outside their house. Because they never go there, see?

Bigger battles
Remember the original Battlefront, on the PS2? What it felt like to be part of a huge battle? Just another cog in the machine, another pointless red-shirt just there to die. In the PS4 incarnation, I still felt like a small, insignificant soldier (because I died a lot), but rather than feeling like I was in the middle of a war, I felt like I was in the middle of a deathmatch. And that took me straight out of the game. Whether the other insignificant targets hanging around with you are player characters or NPCs, more of them makes for a better experience – if I wanted to have a deathmatch, I’d boot up my Compaq Presario from 1998 and play Quake 2.

Some type of interactivity with other players, beyond ‘blaster shot to face’, would be nice.
It seems like the ‘objectives’ in multiplayer mode are just there for decoration – most players are just there to shoot one another, and objectives are secondary. The wins I did achieve in multiplayer were just caused by jogging up to an objective, claiming it while everybody else was shooting each other, lather, rinse, repeat. Give us some benefits to claiming objectives!

Finally, and most importantly, a reason to keep going.
In ‘Dark Souls’, I kept banging my head against the brick wall of every boss, simply because I wanted to progress the storyline and level my character. In ‘Battlefront’, if I levelled I might be able to get a gun that is functionally identical but looks slightly different. Or a slightly different grenade. Or a hat. If I wanted THAT, I’d play ‘Team Fortress 2’!

So, there’s plenty of potential for a sequel to ‘Star Wars: Battlefront’ – but will DICE meet it? Are there any other features you’d like to see? Feel free to give me a shout on Twitter!