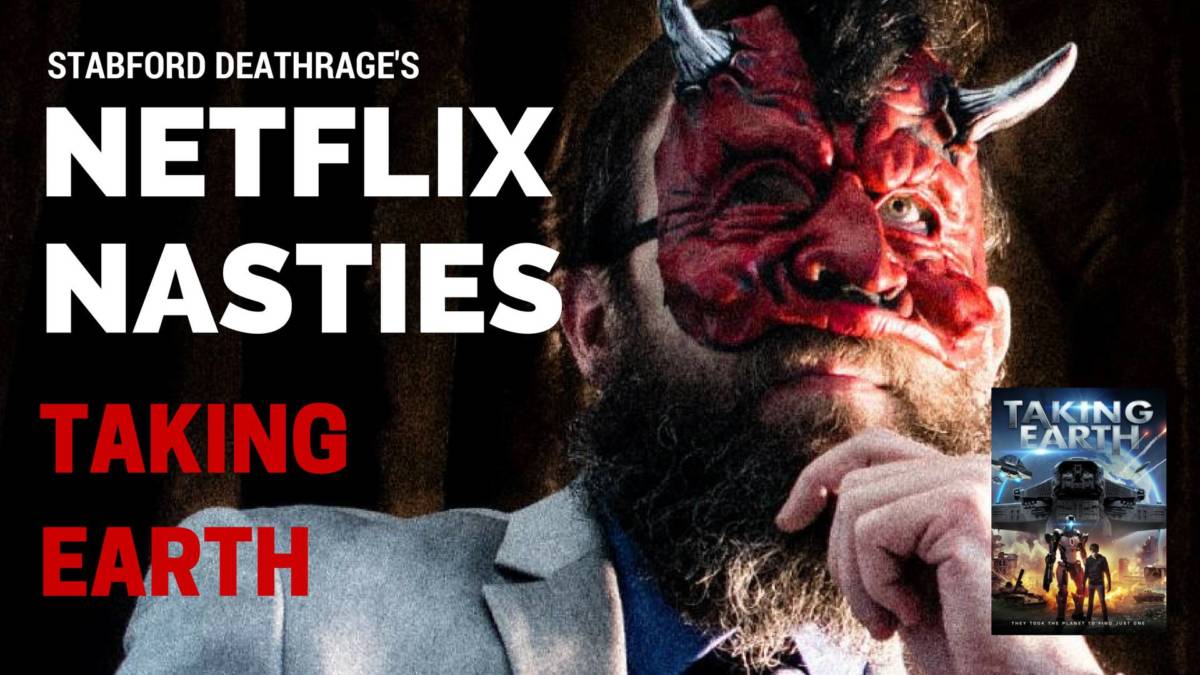 After eating pork and beans out of a sundae dish, an unneeded character is unconvincingly thrown from a high rise window. Many people stare with mouths agape at various calamities, or blink at the sky from out the moonroof of their car as stuff explodes. I’m not sure why.

The plot is explained by two young men as they sit talking as a supernova-bright light bulb mysteriously dangles between them. The men continue talking in an odd exchange on a dam as the filmmakers make use of their drone camera. Why these techniques are used remains a mystery.

A guy wearing a motorcycle jacket stands in what I can only guess is a luxury car dealership as he looks out over a lush, green valley, which is a lousy place to locate a car dealership. Is he a hero, or villain? After multiple viewings, I’m still unsure.

The two main characters have another odd discussion in a forest. The younger man explains that the aliens will kill all 7 billion people on Earth if they don’t find him, and the older man says, ‘This is the most stressful conversation I’ve ever had’, which should go without saying. A robot admires the steering wheel on a Lamborghini. I guess the robot is very motivated to purchase a luxury automobile instead of building one, and didn’t want to make the trip out to the lush, green valley in the earlier scene.

A woman kicks a man in the testicles after he tastes her barbecue sauce-like blood, then she shoots him with the ray-gun she has handily concealed in her purse for just such an occasion. One of the men shouts near a raging inferno and quivering wildflowers. When you least expect it, there’s a slo-mo, violin-music-filled, single teardrop, levitating-then-falling-off-a-cliff, fight montage which is just as confusing as it sounds.

The guy from the car dealership attempts to fit in with the search party that is hunting for the two main characters by abruptly talking about looking for his very unpleasant, annoying, dreadful father unconvincingly named Devin who he has to love no matter how old his father is, and I think it went pretty well considering no one completely freaked out about how weird the whole thing was, although I found the sexual tension in the scene rather alarming.

Someone says it might rain later although it doesn’t look like its rained for weeks until abruptly it looks like there might be a tornado until it suddenly only looks like it might drizzle, and then it doesn’t again, which sounds like classic Weather Channel to me. A fistfight with unnecessary POV camera angles erupts in an airplane hangar which results in middle-aged women awkwardly running and unexplainable explosions.

A fistfight aboard a spaceship breaks out, and you can tell it’s going to happen because the villainous instigator says, ‘Run from this’, which is naturally followed by unintelligible, high-pitched shrieking. Honestly, I try to make it a rule of thumb that if someone says, ‘Run from this’, I most certainly would run no matter what might happen because that’s just such a weird thing to say, whether I was on a crashing spaceship or not.

In lieu of dialogue, stuff seems to occur that reeks vaguely of science fiction, but I’m not entirely sure due to the rapid fire editing, protracted, disconcerted looks, pointing fingers, grimacing and writhing, inopportune flashbacks, open mouthed stares, even more lens flare, crashing space ships, and velvety outer space gowns that wouldn’t be out of place at a renaissance fair.

The movie seemed to will itself to end out of sheer exhaustion, but then it staggers on for another 15 minutes, culminating in a wistful beach reunion filled with crashing waves and inconsistent sunset.

Considering all the motherships, mothers, robots, Lamborghinis, awkward running, and the supposed imminent deaths of 7 billion people from who knows what, Taking Earth is rather slow-moving, and although its running time is 100 minutes, it feels like 100 months.

The frenzied editing, reliance on montage instead of plot, sweeping camera moves, superfluous drone footage, nonlinear storyline, overabundance of main and background characters, obvious chroma key effects, CGI robots reminiscent a Citroen car commercial, acting wooden enough to furnish a log cabin, and head-scratchingly absurd dialogue combine to give a WTF, LOL-inducing atmosphere which compels the viewer to wonder what they are witnessing and why it’s happening, and coming up empty. It aspires to be an epic, but epically fails.