What happens when a comedy starts treating itself seriously? 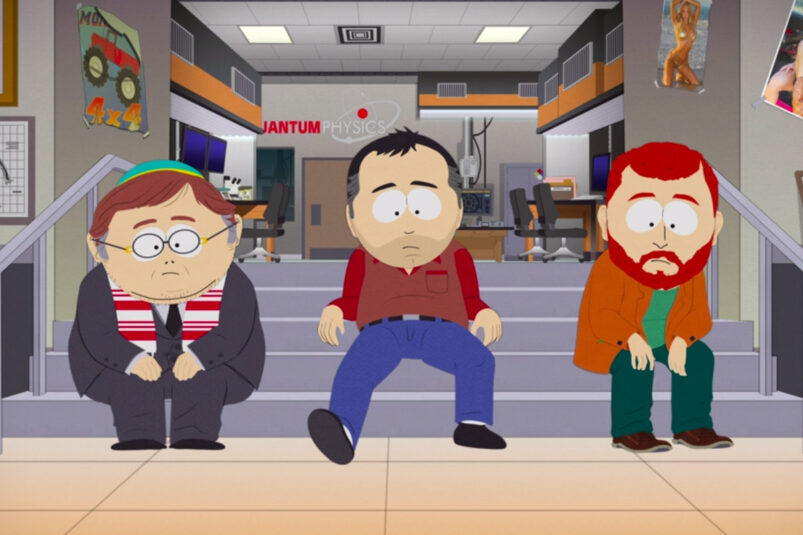 South Park has tweaked its formula in many ways over the years, and the current recipe suffers badly when stretched from twenty minutes to two hours. You can imagine any one of the running jokes of the Post Covid specials being passable in an ordinary episode, but when strung out over a feature-length plot, hitting the same note again and again, it’s daring you to lose interest.

Part of the issue is that there’s no real development of any of the Jokes – and I capitalise that with good reason. You can see them driven into the show like stakes, separate standalone things without much care for what’s going on around them or what they’ve ended up stuck through. The first instance of each of the Jokes is basically identical to the last.

What makes this particularly insulting is Post Covid’s structure of two hour-long TV movies. Asking youraudience to tune in again, two weeks later, to be treated to by and large the exact same jokes as the first instalment seems like an experiment in how little tinsel you need to wave around to keep the punters’ attention.

I’m foregrounding discussion of the jokes because South Park is, after all, a comedy show. Yet it seems slightly dishonest to judge Post Covid as such. Like I say, the Jokes are there, hammered into the story like stakes – perhaps even more so than we’ve established, since they seem to be the barebones structure from which the rest of the show hangs.

More than anything, Post Covid is transplanting the established characters and setting of South Park into a straight drama, with a few fossilised jokes lingering at the bottom of this unusual cocktail and bobbing occasionally to the surface. The plot is the kind of heightened reality you might expect of South Park, or indeed any cartoon, but it’s played straight throughout – remarkably straight for something involving time travel.

This is ultimately all in the service of one of South Park’s capital-m Messages, historically a major aspect of the show – where, at the end of the episode, one of the protagonists would quite literally declare “you know, I’ve learned something today…”. Here it’s quite simply (minor spoiler alert) that Covid’s been awful, so we should all cut each other some slack. Laudable sentiment, sounds awfully like an excuse coming from the people who spent two hours making the same joke about how Alexas are like moody women.

Even the outright drama, though, seems to be a support system in service to the central device of ‘here are the characters you know and love, doing (x)’. It’s the big Post Covid special, after all, aren’t you excited? What’ll they get up to this time? The makers seem to think this aspect has far more substance than it does, and you can practically feel them pausing for the studio audience to applaud when a catchphrase rears its ugly head, or when a familiar character simply appears.

And there’s something of a giveaway in the fact that it’s now leaning very strongly on its own internal canon. This is beyond a little wink to camera when Kenny inevitably dies, this is now on the level of a parallel world history, like our own but distinctly different, where Covid all began with Randy Marsh fucking a pangolin – all of which Post Covid assumes its audience will be familiar with, probably correctly.

For a show that’s – good lord, twenty-four now, able to vote, drink, buy a gun, essentially old enough to have a pretty good weekend in Vegas – this is, if a rather lazy choice, at least understandable. Many of the fans will have grown up with it, some will have known it all their life. It is, for better or for worse, a part of them. For the real obsessives, seeing their old fictional pals again, reacting to current events, seems to be more than enough.

There’s a wider discussion to be had here about so-called ‘parasocial relationships’: the one-way relationships one might have with an actor, musician, or other celebrity, whose carefully curated and polished output is by definition a lot more entertaining than boring normal people. And they demand so much less, too.

(As a kind of internet personality, this is probably what I’m meant to be encouraging – but for God’s sake, if you haven’t recently, get in touch with your friends and family and tell them you love them.)

As South Park: Post Covid itself goes – well, it’s a long-established franchise treading water. And well they might do, considering they’ve been granted a raft of fourteen more films by their benevolent teevee gods. It’s not as if they need to turn out anything groundbreaking to keep the regular bushels of money coming in.

Far more than the other long-running animated shows, South Park has been willing to change things up, as we established when we came in. But using a light veneer of comedy as a vehicle to comment on current events is something they’ve been doing for a long time now (and is hardly a formula exclusive to their show).

On the other hand, using their established cinematic universe – a phrase I do not like deploying – as a foundation for branching into entirely different genres would be a new phase for South Park. The nearest they’ve come to that was with their Halloween specials, like The Simpsons’ Treehouses of Horror an excuse to deploy some non-canonical spookiness, but even those weren’t a full genre shift.

Now, with an order of fourteen films to fill, we could well see them charge headlong down this route. However, they’ll have a tough time coming up with any raw material quite so substantial as a global pandemic. And even the Post Covid duology couldn’t spin two hours out of that alone, drawing in various other trends of the age (as well as the Japanese-flavoured billboards from Blade Runner, a reference they seem a bit too proud of).

What’s perhaps most illustrative of Post Covid’s tendency to hold up South Park’s various clowns like real dramatis personae – and of obvious routes of comic potential being blithely left unfulfilled – is the adult Cartman converting to Judaism. Kyle immediately suspects this is building to something, some grand final punchline after in-universe years of buildup, and the audience probably do too.

Yet even this, the fundamentally ridiculous image of cartoon anti-semite Cartman sporting a yarmulke, is ultimately played straight. And when Cartman gets the bad future which, in all honesty, he deserves, this too isn’t played for yuks (as it has been in the past) but instead as a ghost at the feast, a bleak, sobering moment in an otherwise happy ending.

Lest we forget, it’s Cartman who has always obviously been the show’s breakout character: an eight-year-old Archie Bunker whose bigotry could be plausibly put down to his youth (but still be appreciated by actual bigots), a prototype for the many id-unleashed comic creations who followed in his wake, and occasionally the mouthpiece for any common-sense moral lessons too spicy to plausibly be given to Kyle. Of South Park’s four protagonists, everyman Stan is the closest to the classic image of the main character, but Cartman, the livelier token evil teammate, is surely a close second. He’s certainly the one most people identify with, even if this is in a guilty-pleasure sort of way. And this is the character who Post Covid’s better future, where everything worked out, brings low.

As a narrative choice, this is something out of the morality plays of old – the bad guys are punished for their misdeeds, and the good guys are rewarded. But given the complicated path Cartman treads through Post Covid, calling him a ‘bad guy’ based on that is a little simplistic. It can only make sense in considering the show as a whole, with the quarter-century of plots that have accumulated in his eight-year-old body (during which, yes, he’s clocked up any number of atrocities). And here, again, we return to Post Covid’s strange position, not simply leaning heavily on all that prior canon but being absolutely incomprehensible without it.

You’ve already seen me recoil from the phrase ‘cinematic universe’, but that’s all too clearly what’s going on here – especially with the raft of twenty more upcoming films. Gone are the days when South Park was the cultural rebel, cocking a stop-motion snook at authority. Now, it is the establishment, and its followers revere its canon as religiously as a classicist would Ovid’s Metamorphoses, as much as it might still want to pretend it’s the silly paper-doll show about fart jokes. Like any twenty-something, it finds itself somewhat displaced.

READ MORE: How To End The Simpsons