"Like Spike Lee in BlacKkKlansman, director Guy Nattiv understands that there’s no point pussyfooting around the subject." 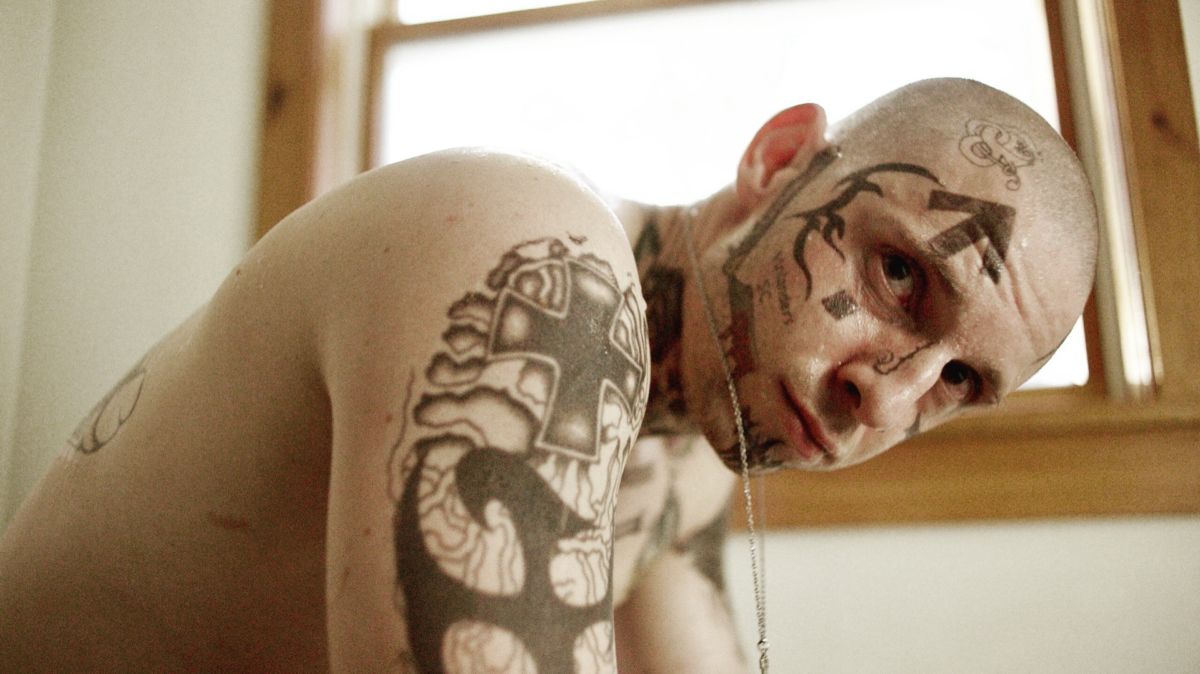 Bryon Widner’s face is completely covered in tattoos. Ranging from mysterious numbers to overt Nazi symbols, images of death to declarations of white pride, I kept finding new ones well into Skin’s runtime. Played by a totally transformed Jamie Bell, Bryon, nicknamed “Babs”, is the very definition of a racist. Based on a true story, Skin is a thoughtful meditation on right-wing extremism. Told from the perspective of a man who finally saw the light, it shows that even the most far gone people can mend their ways.

He is part of the Vinlanders Social Club, a Nordic-fetishing skinhead group that specialises in racist violence. The opening sequence has an eerie and menacing tone, with Babs leading a group of Nazis on a nighttime march in Ohio, shouting slogans such as “Blood and Soil” and “Jews Will Not Replace Us”. This man is a vicious monster, unafraid to draw blood if his people require it. But when he meets Julie (Danielle Macdonald), a single mother of three who sees the good in him, he quickly reconsiders his old life.

His struggle to extricate himself from the white power movement is interspersed with painful tattoo sessions, totalling nearly two years. Likening removing racism to the difficult process of removing a multitude of tattoos is an apt one. It’s not something that just happens by snapping your fingers, but a long and painful road that requires years of structural change. Additionally, you can remove the tattoos but the scars will never heal. They will always show the irreversible effects of hate. Skin understands this well, unafraid to go to shocking levels in order to prove its point. Like Spike Lee in BlacKkKlansman, director Guy Nattiv understands that there’s no point pussyfooting around the subject.

Babs is aided by Daryle Lamont Jenkins (Mike Colter), founder of the One People’s Project which helps former extremists to give up their hate-filled life. He too was filled with hate — hate for what these people are allowed to get away with, but he channeled that into changing them instead. He compares his work to what his father did with addicts: “We take pieces of garbage and turn them into human beings.” Perhaps the film could’ve featured Daryle and his work more, giving him something of a side-role in the story, yet his wisdom and approach provides a fascinating model to countering racism.

Skin also shows that these problems require a complete overhaul of the forgotten parts of America. The appeal of white power groups is strongest in areas with little opportunity, the kind of rundown towns where there’s nothing to do but drink beer and drive around. The Vinlanders, like the Nazis before them, start with the young, recruiting young homeless boys who are hungry and just want somewhere to sleep.

They liken themselves to a family, led by Shareen (Vera Farmiga) and Fred (Bill Camp). Shareen plays the gentle, mother-like figure, while Fred is the harsh leader, bullying the boys into giving him their respect. It’s basically a cult. All money they make — either from running bars or tattoo shops — is taxed. Babs grew up in an abusive hard-drinking household, and was once homeless, giving something like the family structure of The Vinlanders an immense appeal. The film works best in these seductively normal moments — such as BBQs and Halloween celebrations — displaying them to be almost like anybody else. The problem with the USA now, is seeing this same hate fester in the highest annals of government; making Skin less of a feel-good story than a survivalist tale.