She-Hulk is all about figuring some stuff out. 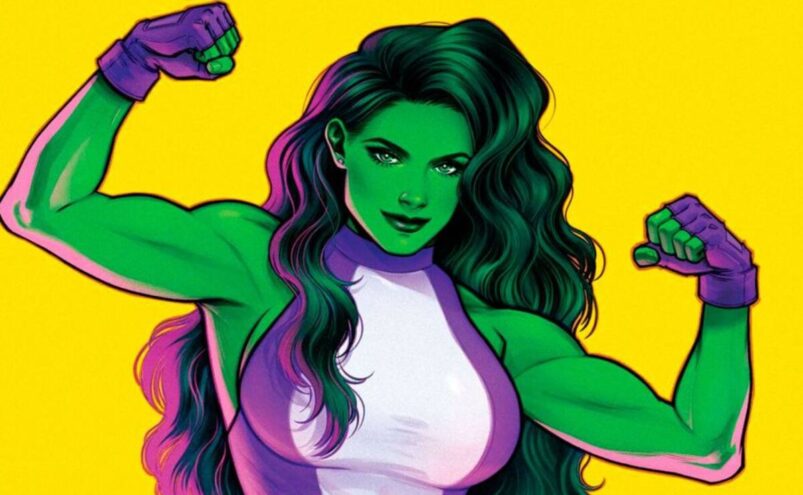 Reinvention is at the core of the superhero genre. Every couple of decades, these characters have to change – in ways big and small – to remain relevant to a new generation of readers. Even so, some superheroes are more steeped in reinvention than others. Take Marvel’s She-Hulk: as her name implies, she’s essentially a gender-swapped do-over of her more famous male counterpart. By her very nature, she’s a new spin on a familiar template.

Yet following her debut in 1980, She-Hulk quickly overcame her derivative roots and developed into a compelling character in her own right. Like her cousin Bruce Banner, lawyer Jennifer Walters is a meek wallflower who transforms into a green-skinned, rage-powered behemoth – but unlike him, she retains her intellect and amiable personality.

It’s a fun rethink of the established Hulk formula, and that’s not where the reinvention stops, either. She-Hulk’s place and purpose in the Marvel Universe itself has shifted constantly over the past 42 years. In that time, she’s joined the Fantastic Four, been an Avenger, and even worked for the god-like Celestials. In many ways, the one constant in She-Hulk’s fictional life is change.

She-Hulk #1, the new series by Rainbow Rowell, Roge Antonio and Rico Renzi, with covers by Jen Bartel and Adam Hughes,leans into this aspect of its titular protagonist’s nature, and in doing so, spotlights the unsung heroism of personal reinvention. It’s handled in appreciably breezy fashion, but it’s powerful all the same.

This is a story about picking up the pieces after your life has fallen apart yet again, and finding the strength to re-assemble those pieces into something new and different that works. When we’re first reintroduced to Jennifer Walters in She-Hulk #1, she’s plagued by negative thoughts that drag her down. She’s reminded of how little she has to show for herself, and of how badly her life has stalled. Other people have apartments and careers; she has expired Avengers I.D. cards and old Fantasti-Car keys. And yet, somehow, she finds the strength to keep moving forward towards a fresh start.

It’s also a story about redefining the rules of the game and how you choose to play it. When Jennifer is confronted by fellow female powerhouse Titania early in She-Hulk #1, she successfully pitches her would-be opponent a more constructive alternative to their usual slugfests. Instead of their standard superhero versus supervillain showdown (which typically end in concussions, property damage, jail time, and the risk of civilian casualties), why don’t they meet up regularly to spar and let off steam? It’s a novel long-term solution to a seemingly unavoidable and unending problem, and all it took was the courage to re-evaluate the status quo.

She-Hulk #1 isn’t just about rewriting the rules, though. It’s also about reframing how the people around you see and value you. Throughout the issue, everyone Jennifer encounters – including fellow superhero The Wasp, and new boss Mallory Book – is expecting her to be in her She-Hulk persona, and on some level, they’re disappointed that she’s not. The implicit judgement here is clear: to them, the statuesque and outgoing She-Hulk is Jennifer’s true, best self. So, Jennifer’s quiet refusal to “Hulk out” in public is also a brave act of defiant self-determination; she’s rejecting who people think she should be, and forcing them to embrace her as she is, instead.

But most of all, She-Hulk #1 is a story about figuring out what you want from your life and recalibrating your expectations of yourself. Towards the end of the issue, Jennifer unwinds with a hot bath and reflects on what she wants out of this latest opportunity to reinvent herself. She decides she doesn’t want to “have it all”, but she does want to have more – including more space for herself in her own life. It’s a goal that’s realistic, modest, and self-interested without being self-centred. It also recognises that everybody (even superheroes) deserves a certain measure of comfort and needs regular downtime. There’s a heroism in accepting this, too.

The cliffhanger ending of She-Hulk #1 suggests that more conventional “cape and tights”-style heroism is on the horizon. Our hero’s friend and former crime fighting colleague Jack of Hearts collapses on her doorstep, a plot development that promises to entangle her in the melodrama and fisticuffs that define the superhero genre. Given the creative team involved, this derring-do will almost certainly be a blast – and really, what’s not to love about seeing She-Hulk cut loose? But if She-Hulk #1 is anything to go by, the real heroism to watch out for in this series will remain its protagonist’s brave attempts to reinvent herself into someone she – and we – can be proud of.

READ NEXT: How Superman And The Authority Evolves The Idea of Superman