Back in all its glory. 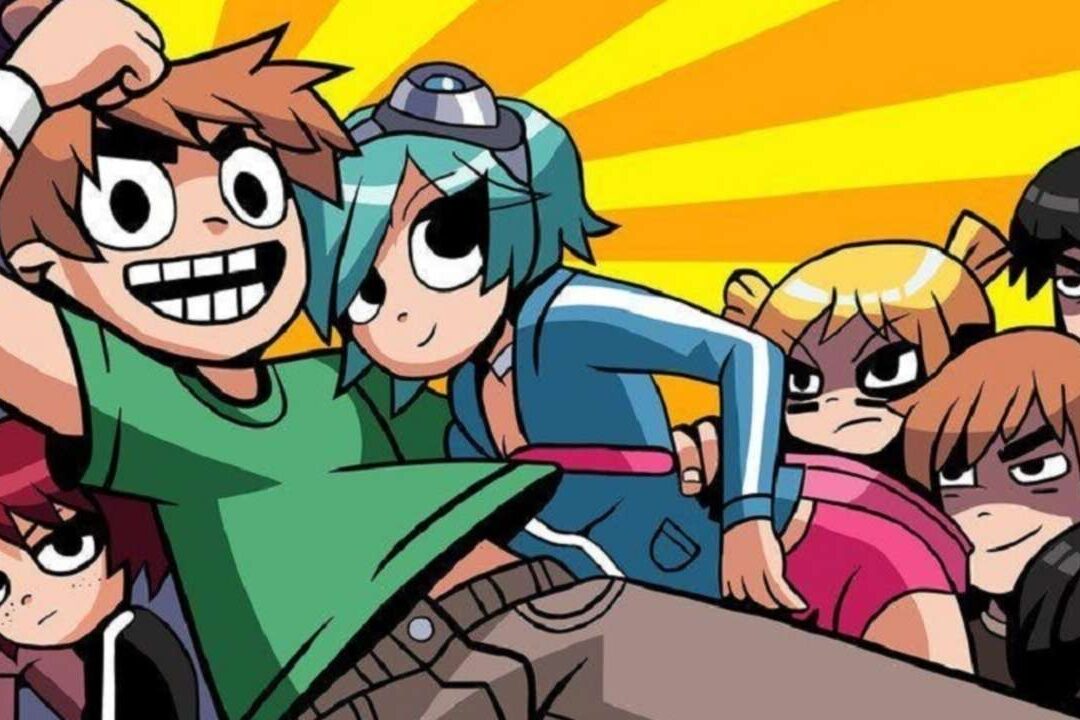 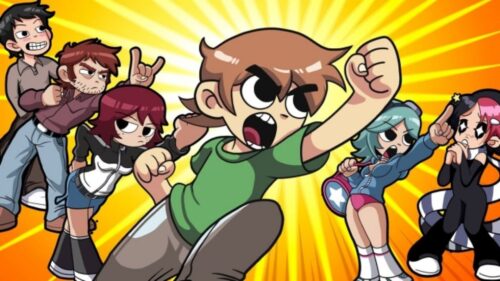 Time is an endless march that leaves many casualties in its wake, with legions of games left forgotten about as we move towards the future. Sometimes, developers try to fight against time by remaking or remastering certain hits, but perhaps no other games has defied time’s onslaught as well as Scott Pilgrim vs. The World: The Game.

It’s well trodden history at this point, but the Scott Pilgrim game is one of the most notable examples of a developer delisting their game from digital storefronts. Ever since getting Thanos snapped out of existence at the end of 2014, fans were clamouring for the iconic beat ‘em up game to return to storefronts in come capacity, and after six long years, it’s finally back. Scott Pilgrim Vs. The World: The Game – Complete Edition is here, and it’s just as good as you remember. 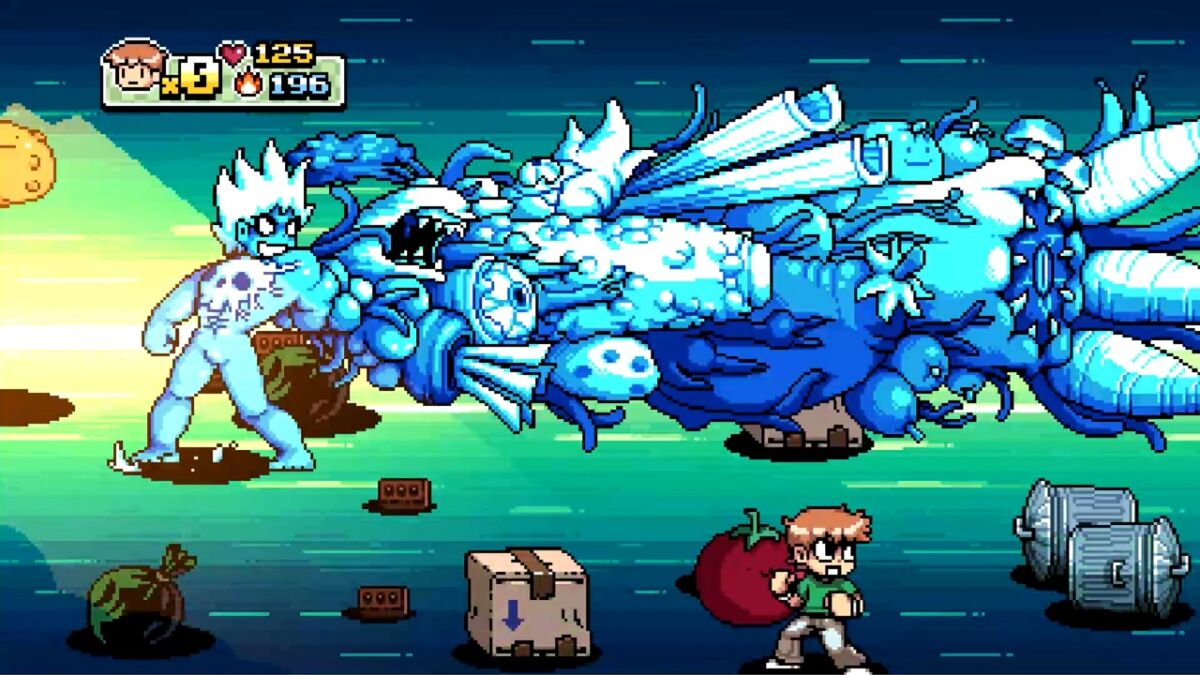 Players choose from one of six characters – Scott, Ramona, Kim, Stephen, Wallace and Knives – and take to the streets of Toronto to batter some goons and take on Gideon’s League of Evil Exes. Ignore the ??? in the character data screen, that’s clearly a bug, there’s definitely not a hidden character for completing the game with Scott, Ramona, Kim and Stephen. Of course not.

The controls follow your standard beat ‘em up formula, with X for light attacks and Y for strong attacks. You can hold B to block, and the bumpers are used for special moves. LB calls in a striker, who will attack everyone on the screen with a special skill, while RB performs super attacks, which are powerful, screen clearing attacks that require Guts. 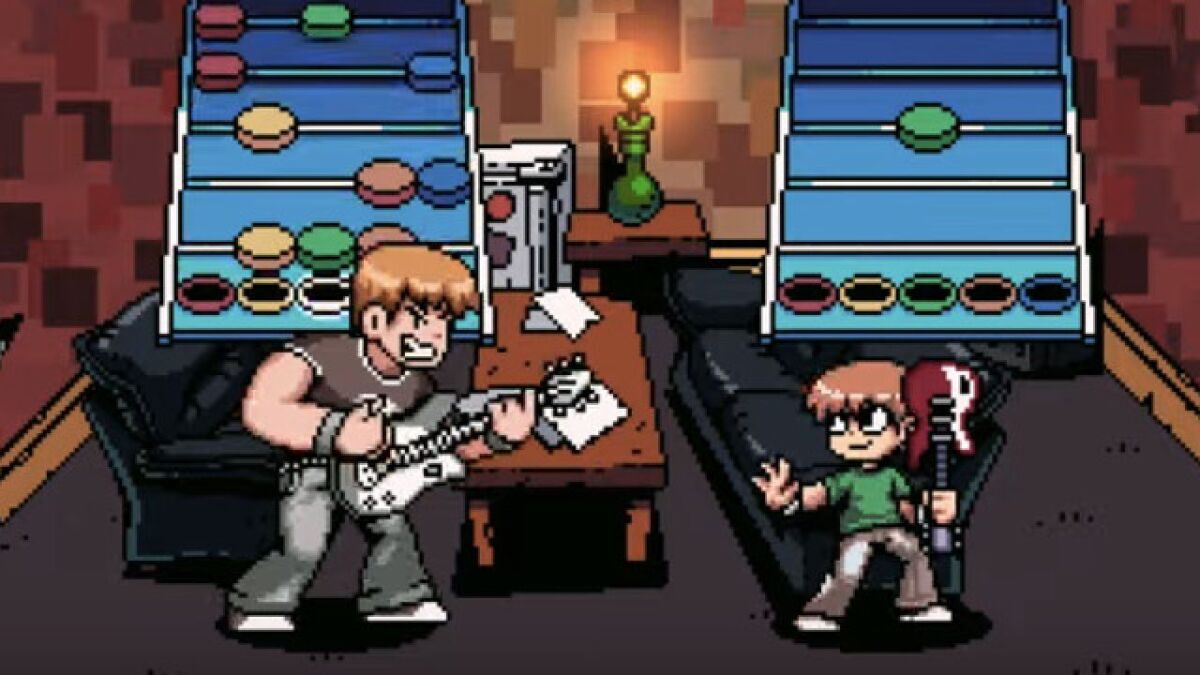 Normally in beat ‘em ups, powerful abilities require you to sacrifice your health in order to decimate your opponents, but Scott Pilgrim does it a little differently. Aside from your health pool, you also have your Guts, which allow you to perform special attacks and get up after losing your health without also losing a life.

The Guts feature creates an interesting dynamic when it comes to approaching combat. You can either lean heavily on the special attacks and use all your Guts, dealing with the fact that you won’t be able to revive yourself after losing your health, or you keep away from the special abilities in an attempt to maintain longevity. Honestly, the ideal strategy is likely somewhere between those two philosophies, but I’m a bugger for brute forcing fights because I might need those Guts later. 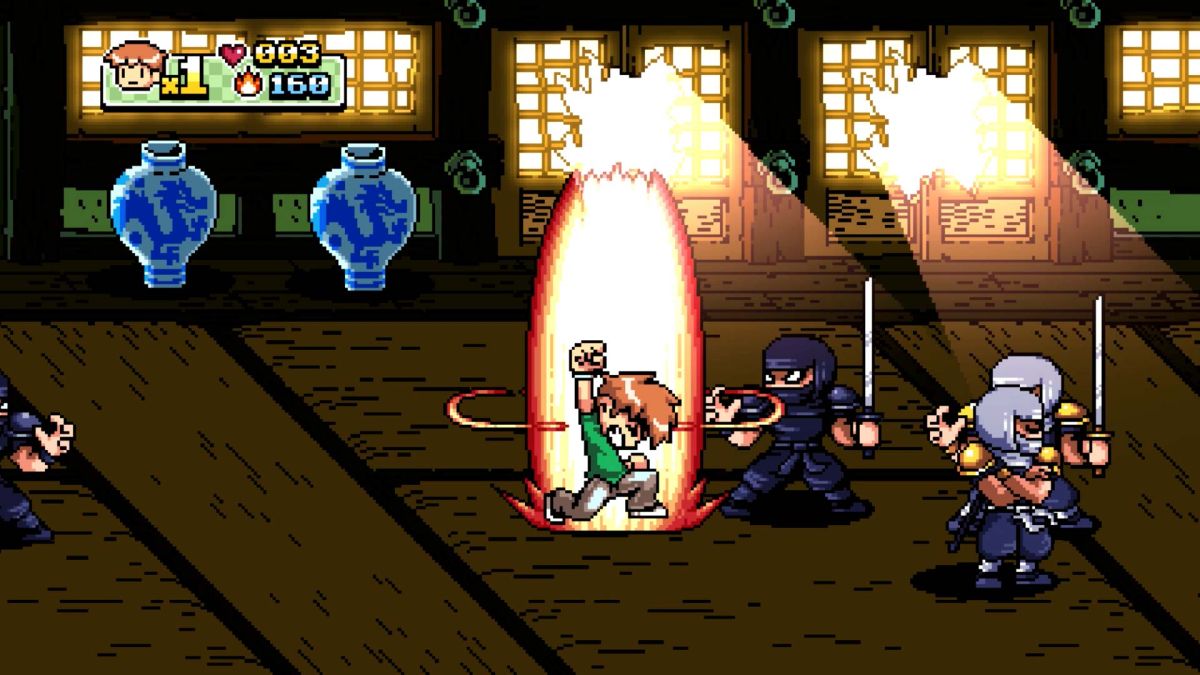 Admittedly, the gameplay in Scott Pilgrim takes a few levels to really gel, even if you’re a dedicated veteran. My rose tinted glasses told me that the Scott Pilgrim game was always a fast-paced brawler with plenty of moves and combo potential, and while that is still true, there are a few progression systems that you’ll need to delve into in order to get the most out of the game.

As you progress through the game, cracking skulls along the way, you’ll level up through levels 1-16, unlocking new moves along the way. When first starting out, all you’ve got is a basic combo and a strong attack, but by the time you’ve hit max level, you’ve got a plethora of moves that can really flesh out your combo and defensive potential. Aerial head-stomps, charge punches, massive uppercuts, dodge rolls, parries and running slides will become second nature to you, creating a more well-rounded and enjoyable experience as you play. 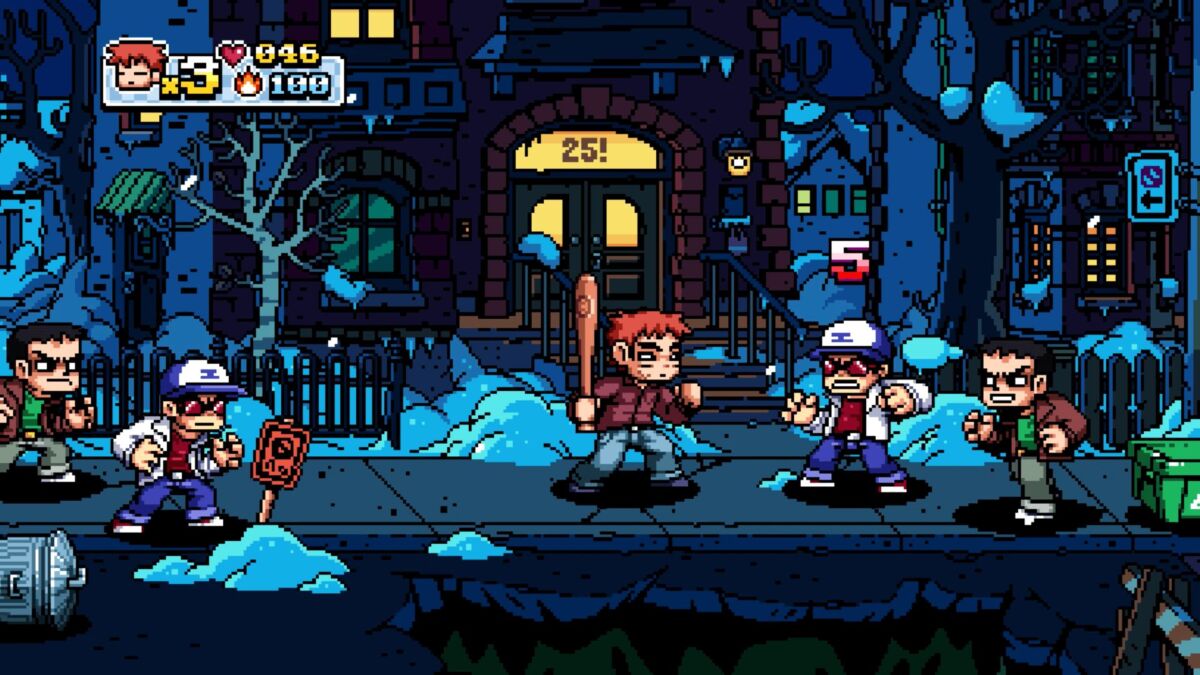 On top of all that, there’s a variety of shops throughout the game that offer items which boost your strength, defense, speed and willpower. These stats govern your attack power, health, speed and amount of Guts you have to play with. It’s all well and good to have access to a variety of techniques, but if you’re practically tickling your foes when you hit them, there’s no point.

It’s a lot more than your more standard beat ‘em ups, and it’s a system that does encourage grinding and multiple playthroughs. Save data for characters carries over no matter the difficulty, so you’re incentivised to play through the game on a harder level with stronger stats. That said, you might be revisiting old levels anyway to grind money just so you can clear some of the later levels. Scott Pilgrim can be pretty tricky when it wants to be. 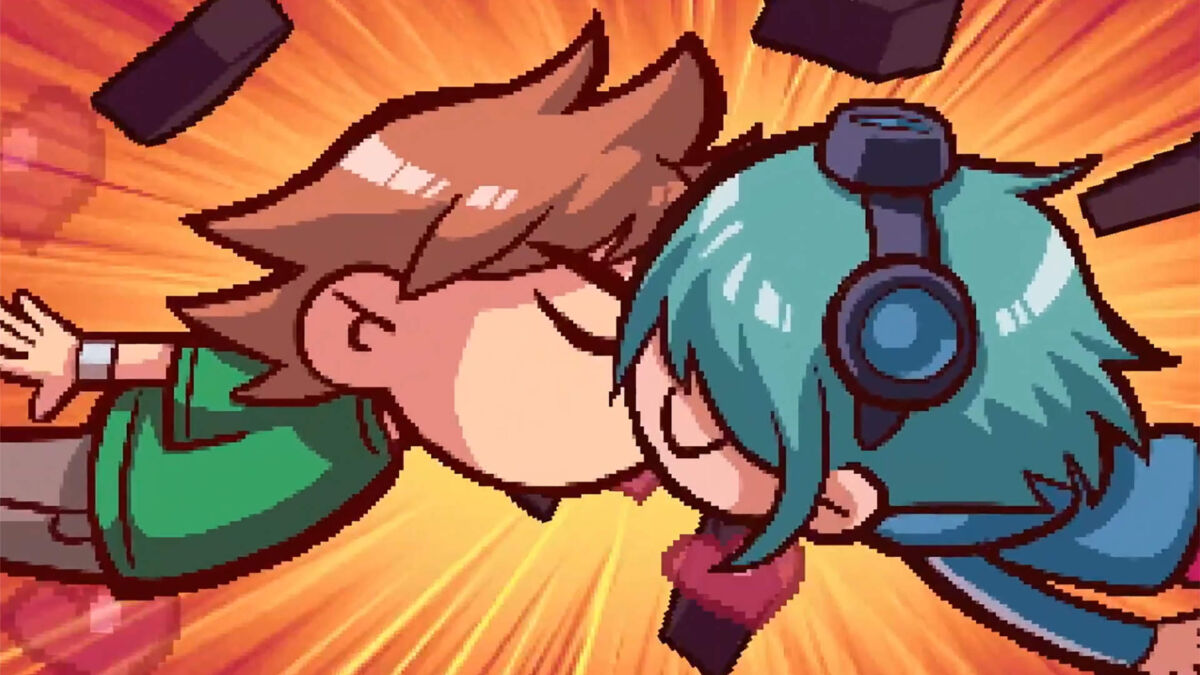 Once you’ve reached max level and increased your stats accordingly, the gameplay truly comes alive, as bodies and weapons are flying around the screen and creating wonderful combos that are sometimes intentional and sometimes unintentional. It’s chaotic, but incredibly enjoyable chaos. There’s something brilliant about coming back to the first level, powered up to a ridiculous degree and one-shotting half the enemies. It’s almost like bullying, but without the shaky morals because it’s just pixels that you’re battering.

And what beautiful pixels they are. Created by Paul Robertson, the visuals practically leap off the screen, perfectly capturing the essence of Bryan Lee O’Malley’s seminal comic book series. The soundtrack by Anamanaguchi is also just as awesome as it was back in 2010, containing plenty of bangers as you pummel your way through the game’s seven levels. 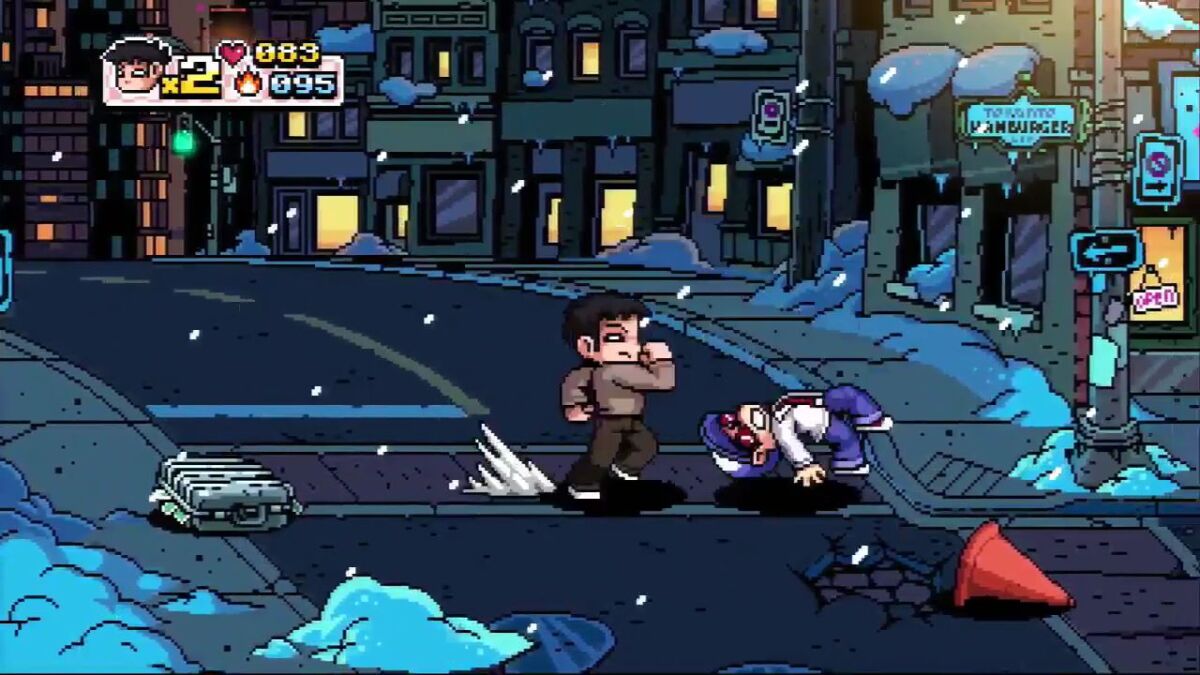 The chaos of Scott Pilgrim Vs. The World: The Game is also amplified once you add new players into the mix, and with support for up to four players on both local and online co-op, you should be able to find someone to play with. Hell, there’s even two additional party modes thrown in for if you get tired of punching and kicking goons in the face.

There’s one or two faults here and there, though they’re minor nitpicks if anything. I’m not sure if it’s something to do with the porting process, or if I never noticed these glitches on my crappy CRT TV 10 years ago, but there’s a couple of small visual errors to be found in the background of some levels. There are also some instances in the game where you’ll walk or spawn into an area only to be immediately attacked. Unless you know you’re about to be attacked and block in time, it feels like you’re taking cheap damage.

These are minor qualms in the grand scheme of things, as Scott Pilgrim Vs. The World: The Game – Complete Edition is every part the fantastic beat ‘em up it was back in 2010. Welcome back, Scott. You’ve been missed.

A digital code for Scott Pilgrim Vs. The World: The Game – Complete Edition was provided for the purposes of this review. 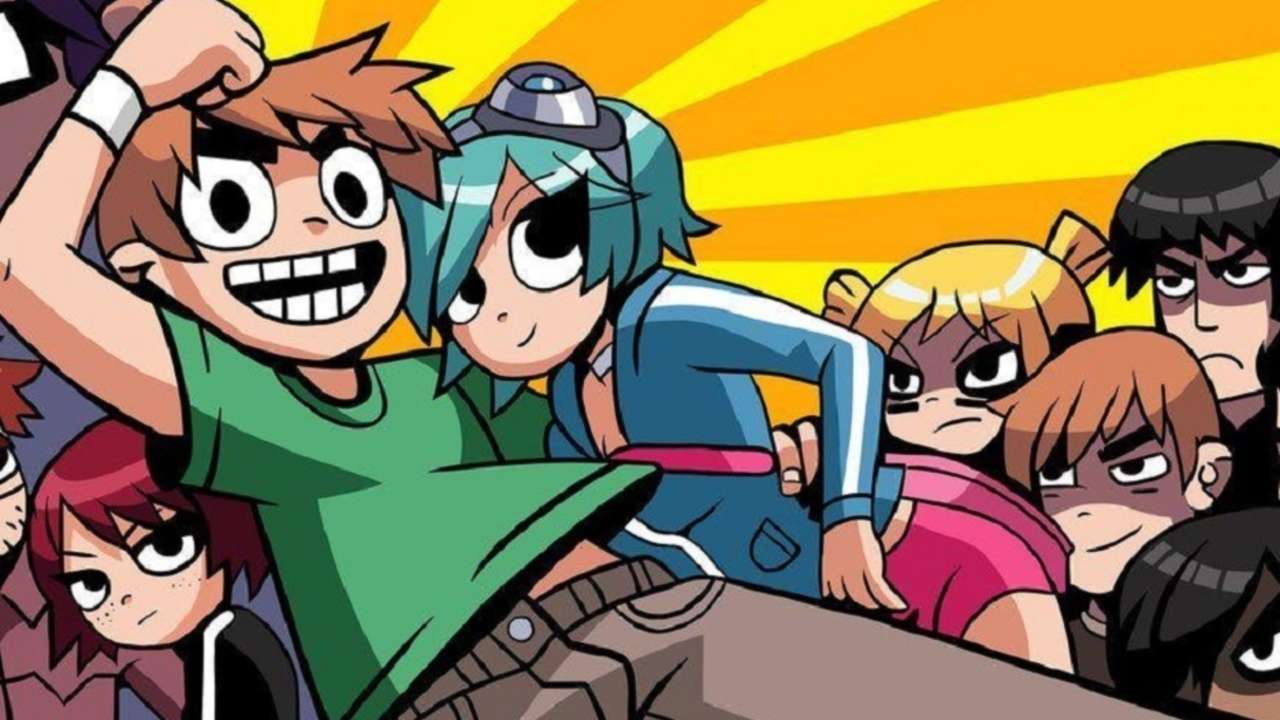 Verdict
A truly fantastic beat ‘em up that’s been brought back from the dead, Scott Pilgrim Vs. The World: The Game - Complete Edition is utterly sublime.
8.5
Cultured Vultures is a pop culture website established in 2013 covering all things gaming, movies, and more. We eat your words.
All The News On The Biggest Games