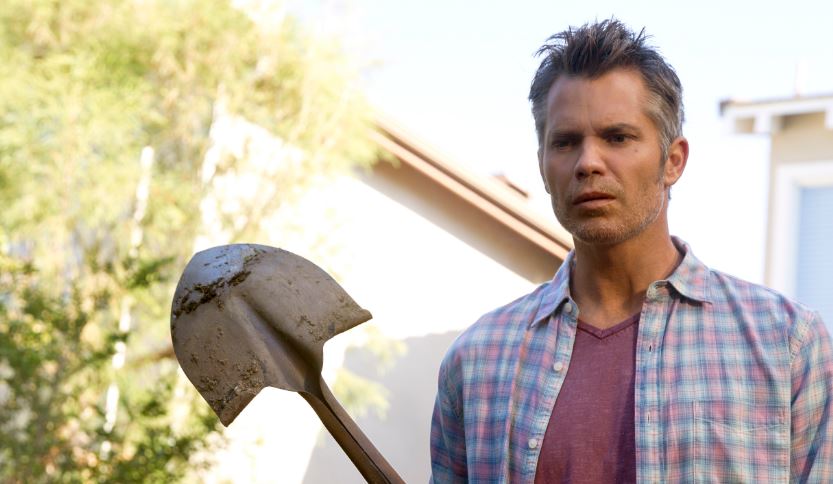 “I’m going to find you, Anton, you blurry bastard, and then I’m going to read your book.”

For anyone on the outside looking in, Santa Clarita Diet seems like a show that might already be a couple of years too late. The undead craze has died down, thanks to just how many ten a penny zombie movies have been released and the mythos being just one tweak away from collapsing completely. Its premise isn’t even particularly original, either: it’s Dexter meets iZombie. Let’s not even try to put it on a bigger pedestal.

Shows like these live and die by their casts, the talent who are able to elevate simple, worn ideas to better levels than they have any right to be at. Although most of the cast is more than capable (Liv Hewson continues to her reputation as a burgeoning star), Timothy Olyphant’s turn as beleaguered patriarch Joel is the real highlight of Santa Clarita Diet.

In the midst of viscera and absurd situations, Olyphant always finds a way to make the best of what’s he given, something that he’s been doing quietly for decades in the business. Whether he’s the villain or the anti-hero, Olyphant has an aura about him that harkens back to Eastwood of old, before he went crazy and started talking to chairs.

A former quarterback turned realtor, Olyphant’s Joel is your typical repressed middle-aged yuppie, happy to coast by on life worrying about toasters. Although he only realises it later, the illness making his wife Sheila (played inconsistently by Drew Barrymore) need to eat human flesh and all the trouble it brings with it is what makes him feel alive again, snapping him out of the daydream brought on by suburban life.

Before he gets to that point, though, his gradual awakening creates some of the funniest one-liners ever committed to the small screen. Struggling with the stress, Joel’s mask of decorum slips, which makes him shriek in horror at the next big problem or swear like a sailor after several energy drinks. An encounter early in the series with Sheila’s possible “prey” shows how poorly he handles stressful situations, offering the weed dealer and statutory rapist a “water drink”. A simple joke, sure, but Olyphant’s delivery is key.

Olyphant is the main attraction of every scene he’s in, which helps that he’s in almost every single one. Even though Drew Barrymore is probably the main attraction for most curious viewers, she’s almost like a periphery character until halfway through the series. The show appears to be more about the mental toil it has on Joel and their daughter rather than the transition of Sheila, which works out for the best. How many times have you sat patiently through an undead “genesis” story and wanted to move on?

Joel’s unblinking love for his childhood sweetheart makes him the show’s most likable character, even if he routinely does the wrong thing or resorts to dramatics. By putting the lens of Olyphant and letting him get the lion’s share of the quips, Santa Clarita Diet is a success. It won’t change your life, but hopefully it will change Olyphant’s and get him the kind of roles he deserves from now on.