Some weak modes aside, Samurai Shodown is an easy game to recommend. 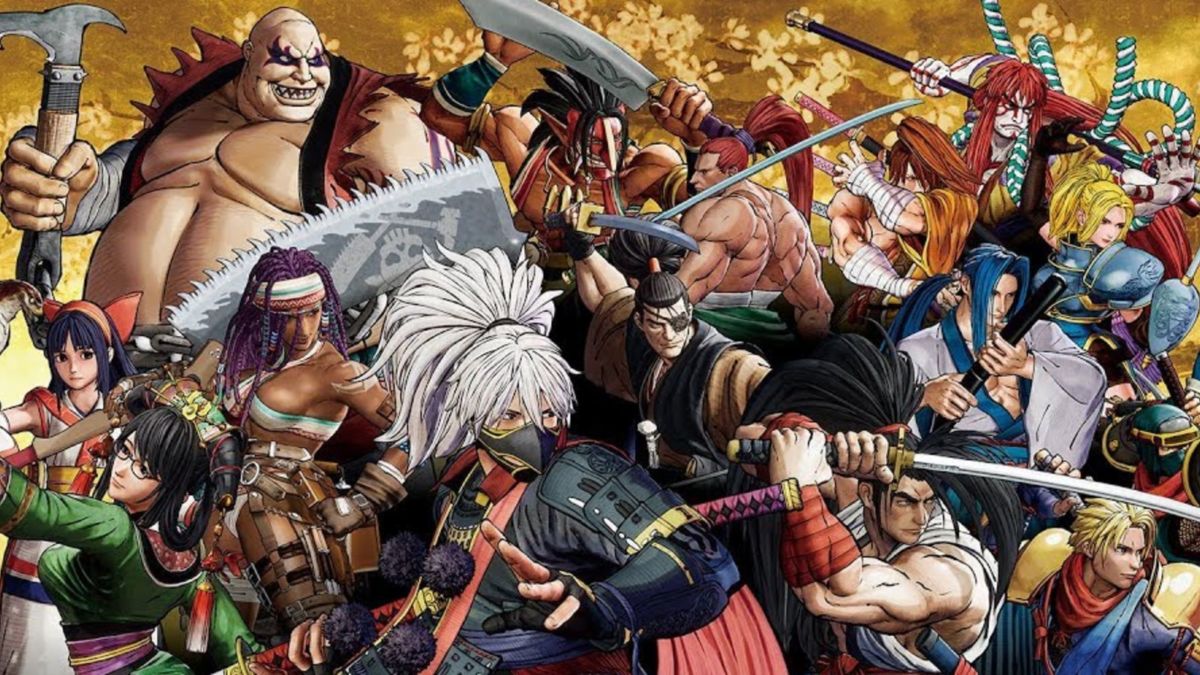 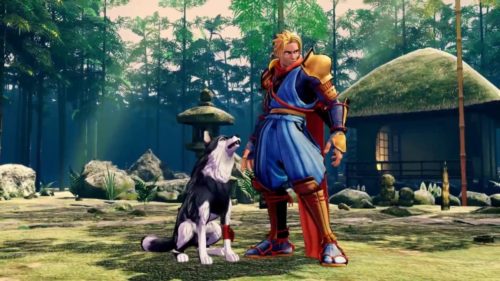 There have been plenty of weapons-based fighters over the years that have captured the imagination of gamers. Soulcalibur springs immediately to mind, but despite how much games of that ilk might kick ass, they fail to capture the tension of a cinematic duel. Two proud warriors, fighting to survive in bloody combat that could decisively end at any moment.

No, we’re talking about Samurai Shodown today, not Bushido Blade.

A now 26 year old franchise, Samurai Shodown hadn’t seen a dedicated, solo release since 2008’s oft-maligned Samurai Shodown Sen for the Xbox 360. 11 years is a long time to wait for the latest offering in a series, so this year’s prequel/reboot had a lot to live up to, and while it’s not perfect, it definitely delivers in a big way. 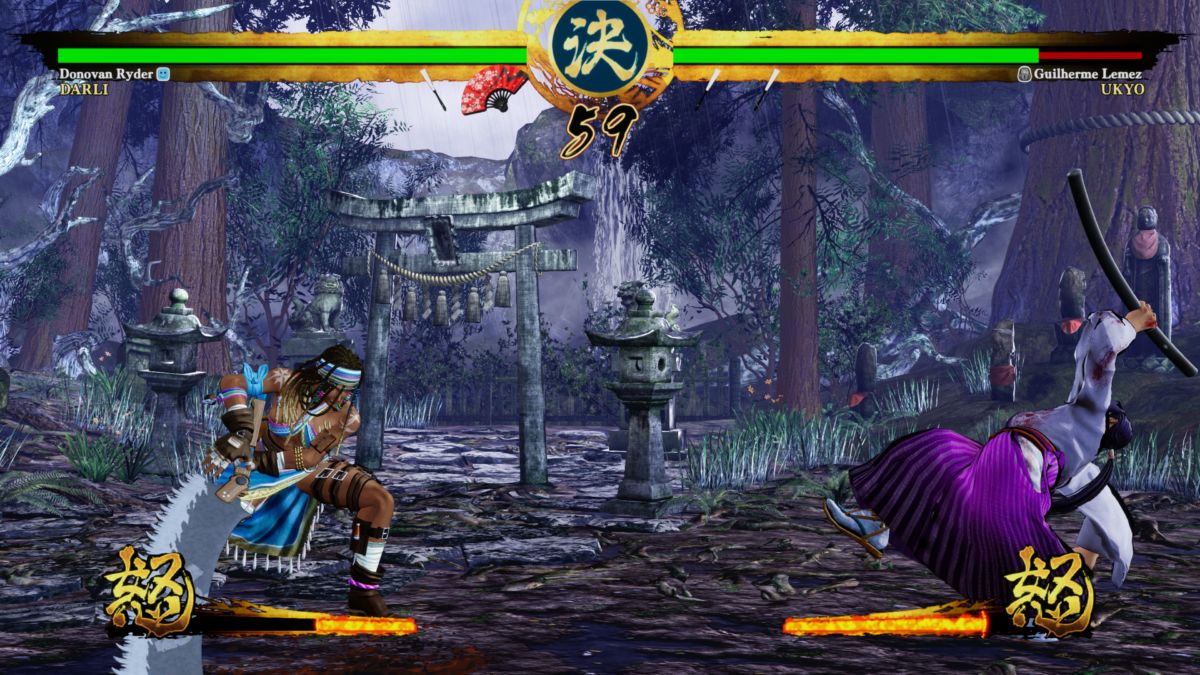 As mentioned, Samurai Shodown is equal parts prequel and reboot, telling a brand new story that takes place between Samurai Shodown V and the original game from 1993, though the story is about as inconsequential as it gets, especially if this is your first ever Sam Sho outing. There’s a demon rising to power in feudal Japan, and all the warriors have gathered to maybe put a stop to it. That’s about as good as it gets, really.

The same criticism could certainly be levied towards any fighting game with an arcade ladder style mode, where you fight X amount of opponents followed by a rival and boss. They’re all formulaic, but labeling this mode as a story mode only sets it up for disappointment. Perhaps we’ve just been spoiled by NetherRealm Studios and their amazing story mode offerings though. 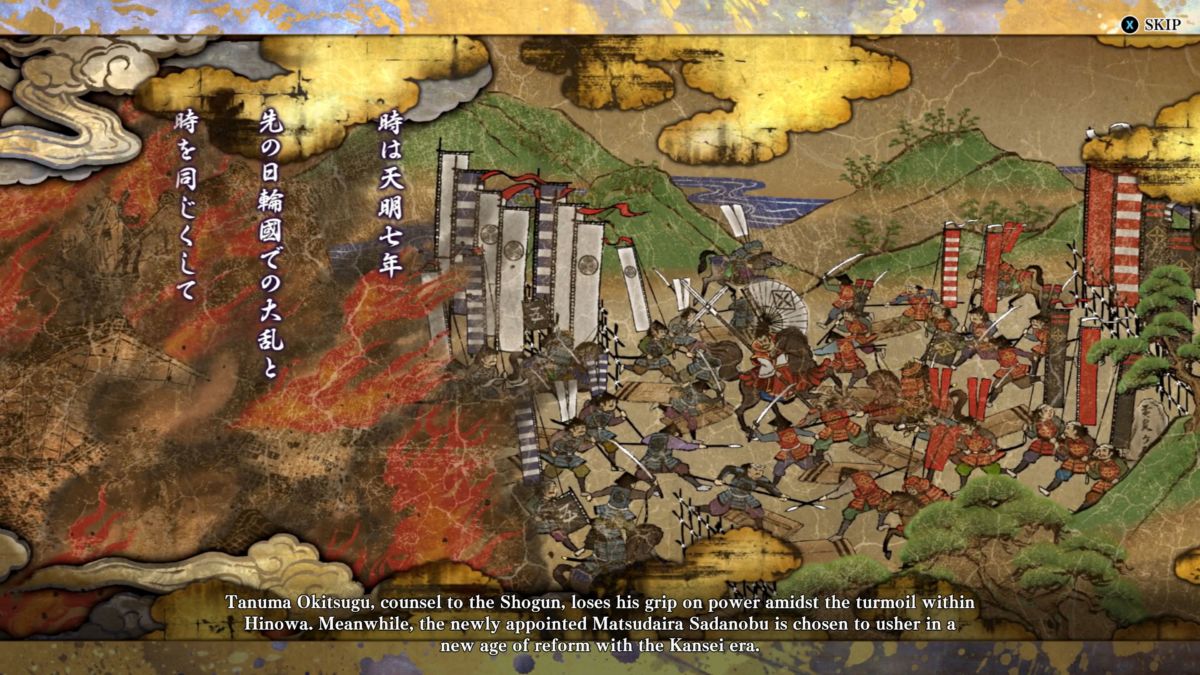 Underneath that, Samurai Shodown is a tense confrontation between two skilled opponents. Well, the characters are skilled. You and your human opponent might just be spamming jumping heavy slash, but that’s besides the point. The beauty of Samurai Shodown comes in its intensity, as death and crushing defeat is always a possibility.

Due to the lengthy start-up and recovery animations of heavy slashes, especially when they’re blocked, combined with the insane damage of the attack creates a risk/reward scenario that positively fuels the gameplay. Going for that heavy slash will delete at least a quarter of your opponent’s lifebar if it lands, but you leave yourself open to an even worse counter-attack if you miss. 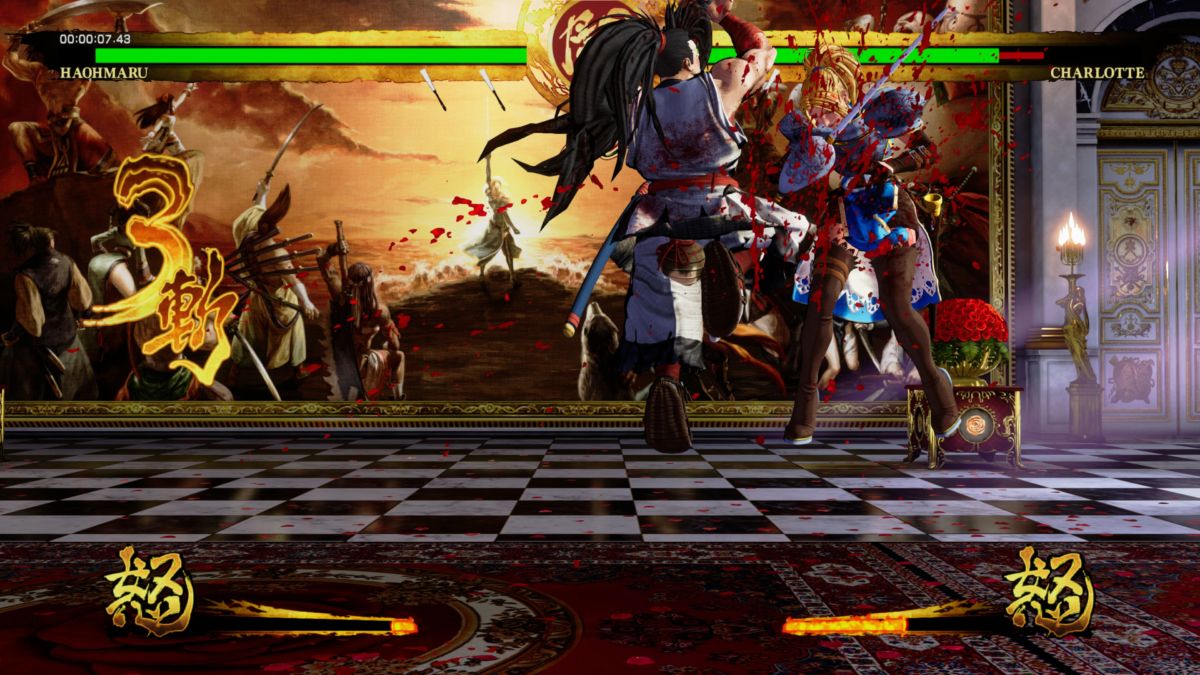 While there are special moves and the occasional combos, Samurai Shodown has a deliberateness and precision that very few fighting games currently offer. Being able to perform, or more likely be in the receiving end of lengthy combos in the likes of Mortal Kombat is impressive and all, but there’s a unique thrill that comes with watching your opponent’s life drain in one swift strike. Lengthy combos look spectacular, but the high damage of Samurai Shodown can make you feel powerful.

There’s plenty of strategy to be found too, especially when it comes to the tools that you’re given. You have a Rage gauge which fills depending on how much damage you take, and once full, you can perform a weapon flipping technique that’ll disarm your opponent if it lands while dealing out massive damage.

On top of that, you have two highly powerful abilities that can be triggered at any time. Rage Explosion is triggered with a press of the left trigger, or all three slashes together. While active, your attack power is greatly increased, you can perform weapon flipping techniques forever until the Rage Explosion ends along with the new Lightning Blade ability. 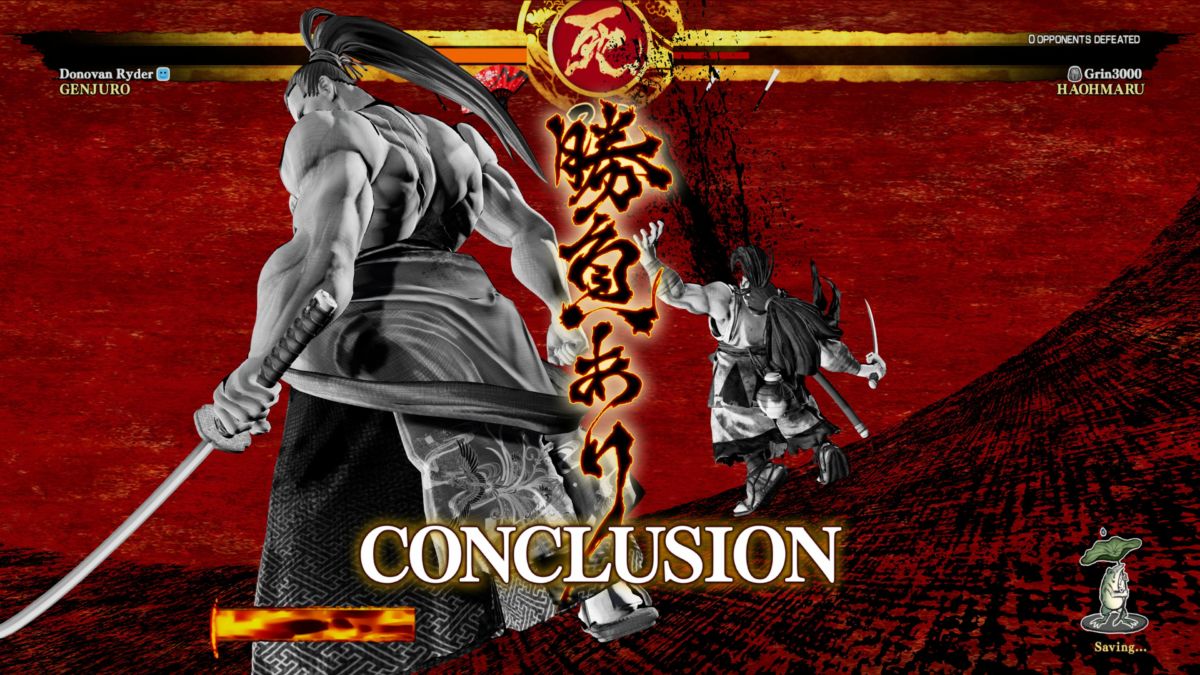 Lightning Blade is activated with a second press of the left trigger, and doing so will see your character launch horizontally across the screen quickly. Landing the attack not only shows an incredibly stylised animation, but deal massive damage to your opponent depending on how much Rage Explosion you have. The longer you have, the more damage you’ll deal when you cash in.

Your other ability is a Super Special Attack, a universal input activated via forward, half-circle back to forward + medium and heavy slash. Sounds complicated, especially when written down (have a look at it below), but it’s easy to get to grips with after some time with the game. The Super Special Attack is extremely telegraphed, but when it connects, it deals around 80-90% damage.

The strategy behind these two abilities comes from the fact that you can only use them once per fight, meaning you have to think about when to best utilise their destructive capabilities. They’re a gamble, equivalent to going all in at the poker table or spending money on loot boxes (wahey), and they can either pay off in a big way, or leave you hamstrung in the fight going forward. 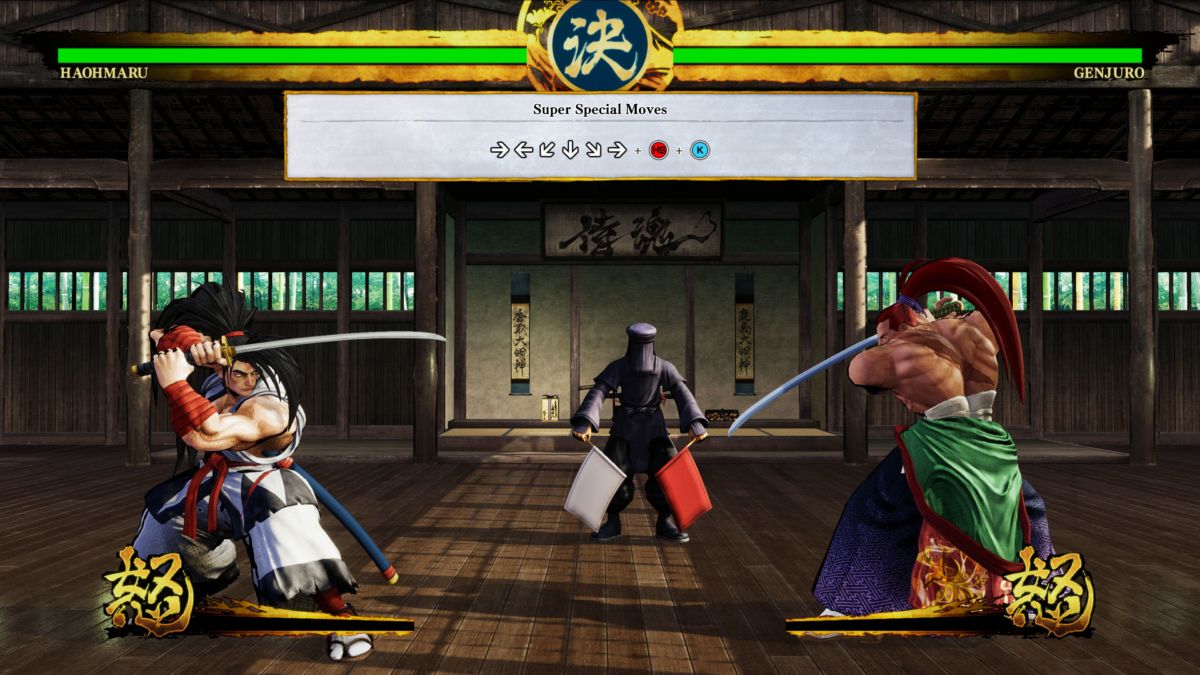 With that in mind, how do you proceed? Do you cling on to your most powerful tools on the slight chance that you need to clinch victory from the jaws of defeat, or do you fire them off at the beginning of the first round in an attempt to catch your opponent off-guard with a blitzkrieg? Or, you could just use it to send a message. Nothing like a bit of overkill to demoralise your opponent.

As a sidenote, it’s interesting to see how Samurai Shodown deals with limited resources when compared to the likes of Mortal Kombat 11’s Fatal Blows. Samurai Shodown’s one-and-done approach makes for a much more thrilling and strategic affair than MK 11’s “keep trying until you land that hit” style.

Sam Sho has the offensive credentials to create excitement, but it also has plenty to offer defensively too. Just Defenses reward those who are able to time their blocks efficiently, while dodges and counters can easily turn the tables on your foe in one fell swoop. The best defense, in the case of Samurai Shodown, is actually a good defense. 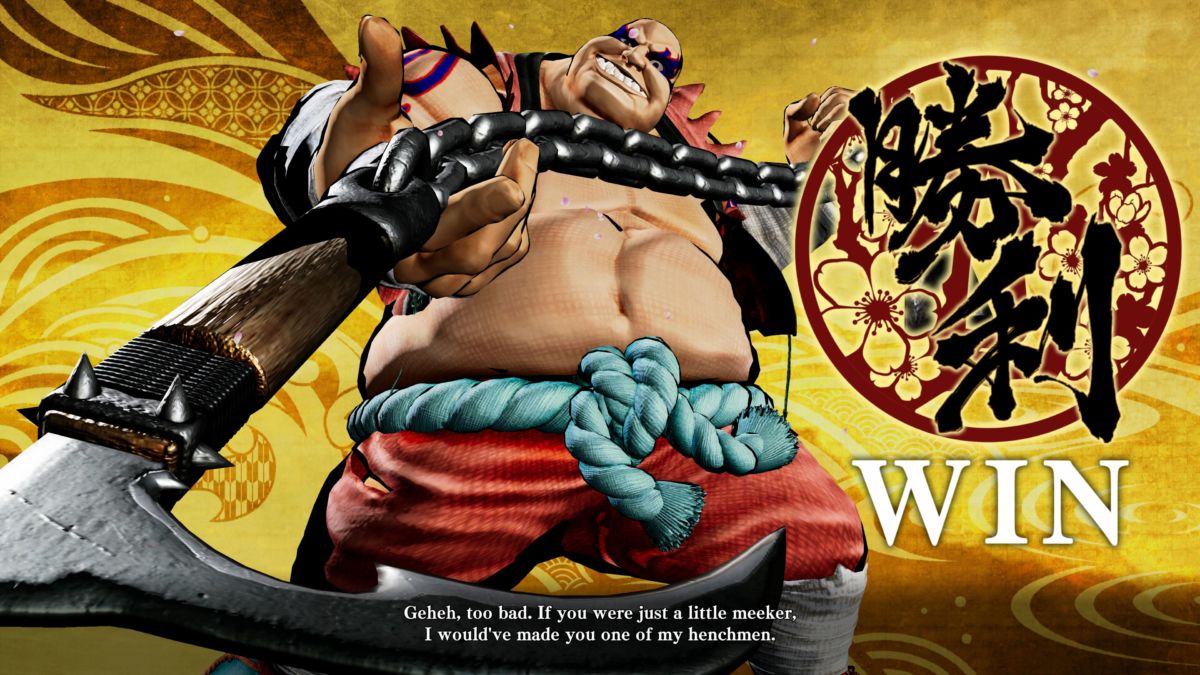 There’s definitely a lot to get to grips when it comes to learning Samurai Shodown, but thankfully SNK have provided a tutorial mode to get players up to speed on a lot of the basics. While it’s not at the same level of detail that an Arc System Works tutorial might be, it’s a welcome and useful addition nonetheless.

Visually, Samurai Shodown is gorgeous to look at, with the cel-shaded aesthetic giving Feudal Japan and its inhabitants a real sense of vibrancy. The characters, animations and backgrounds all look beautiful, but SNK really nailed the distinctiveness of the weapons each character uses, particularly with the visual and auditory hit effects.

Traditional katana wielders like Haohmaru, Jubei and Genjuro slice through flesh like a hot knife through butter, while rapier user Charlotte’s attacks stab and pierce, but it’s newcomer Darli Dagger’s serrated blade that really steals the show. Hearing and seeing her custom sword carve through an opponent is just brutal to behold, and I love it. 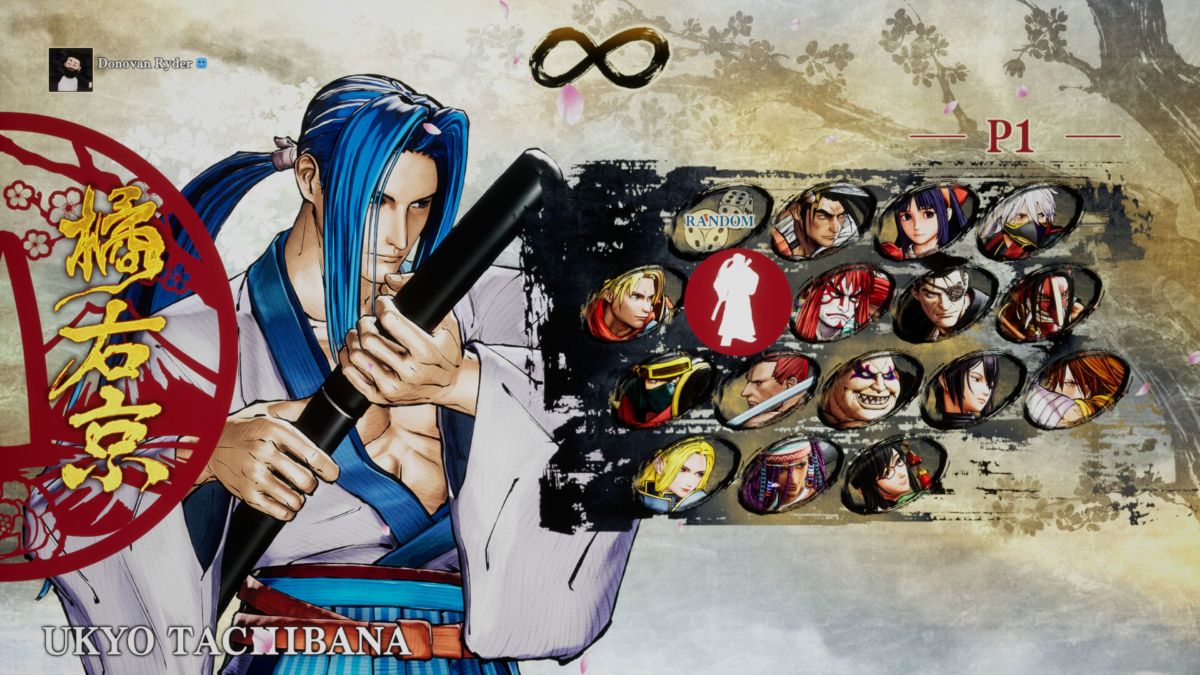 The gameplay of Samurai Shodown is definitely some of the best available right now, but players might find issue with the modes available. Story Mode is a bit of a lame duck, as we’ve already mentioned, while the time trial and survival modes are ostensibly the same mode. Both involve winning as many fights as possible, except one has a time constraint and the other has health constraint. Gauntlet is a different take on those modes, tasking you with taking down all 16 rosters members in one run.

The Dojo Mode is fairly disappointing right now too. Using machine learning and AI technology, Dojo Mode is designed to create ghosts of your playstyle that players around the world can download and take on, either in single battles or via the Ironman Challenge, where you take on 10, 50 or 100 ghosts in one sitting.

The problem with these ghosts is that something appears to be lost in translation. The ghosts become almost caricatures of themselves, with their offensive or defensive preferences dialled up to 11. If you like to play methodically, dodging and countering attacks, expect your ghost to just mash dodge continuously until you put them out of their misery.

As for the online modes, it’s your standard fare of casual and ranked matches. Ranked is for the competitive players and in casual you can engage in 1v1 matches, team fights or just online training with a friend. Again, it’s slim pickings, but the netcode is decent enough to keep you coming back for hours if you really love the core gameplay.

And it is the gameplay that’s the main attraction, offering a visceral thrill unlike anything else on the market today. Samurai Shodown might be somewhat of an unknown quantity when it comes to the mainstream playerbase, but with this latest instalment, SNK have established the series as a force to be reckoned with.

Verdict
Though some weak modes dampen the overall package, Samurai Shodown might just offer the best pure fighting game experience in recent memory, for both veterans and newcomers alike.
8