REVIEW: ‘If You’re Reading This, It’s Too Late’ – Drake 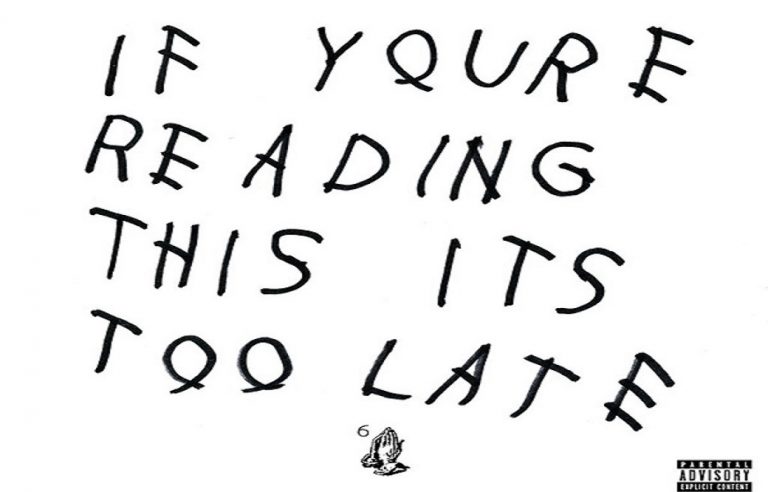 Before we get into this review, I feel the need to make it clear that I’m not hating on Drake.  Whenever I review his albums, people always hit me with “how can you hate on Drake?  He’s the most famous rapper to put your city on the map!”  I acknowledge that he has helped boost tourism in Toronto through his work with the Raptors, King Of The Dot, and his OVO Festivals.  I acknowledge his fame, financial success, brand recognition, award nominations, and the impact he’s had on Canadian music.  This review is strictly about his music, and none of the aforementioned factors matter here.

Drake surprised us by releasing If You’re Reading This, It’s Too Late out of nowhere around 11pm on a Thursday night.  He also surprises us by not revealing any of the guest features in the tracklist, while PARTYNEXTDOOR, Lil Wayne and Travi$ Scott each make appearances on this predominantly solo effort from Drizzy.  The only recognizable single on here is “6 God”, which was released last summer, and the rest of the album is mostly brand new material.  Despite what you may think of Drake, his surprise approach with this album (similar to J. Cole’s approach with 2014 Forest Hills Drive) has to at least spark some curiosity.
(Sidenote: I’m aware he’s calling it a mixtape.  Whatever, it’s still a full-length body of work with original production)

If You’re Reading This… starts with the song “Legend”, where Drizzy sings “oh my God, if I die, I’m a legend” on the chorus.  He has a point I suppose, but he sings with that annoying lullaby-like melody, and I was tempted to not even continue with the album after hearing the track.  Things pick up quickly though, with some head-nodder beats on “Energy” and “10 Bands”, typical songs about haters and money respectively.  Drake does a lot of bragging on this album, which is normally great for Hip-Hop when the rapper can back it up with clever rhymes, wordplay, and get that holy-shit-that-rhyme-was-so-dope-I-need-to-rewind-this-verse reaction.  In Drake’s case though, he uses real simple rhymes and little wordplay to brag about his women and money, giving the album more of a douche-y vibe.

Although Drake is known for catchy hooks, the hooks in the next part of the album are pretty terrible.  If he’s not doing his monotone lullaby thing, he’s just shouting the same phrase similar to his “Worst Behavior” hook from Nothing Was The Same.  About halfway through the album, we get to “6 God” and “Star67”, which despite the terrible rapping at least have some dope production.  Drake raps about when he first started blowing up early in his career, but the way he delivers his vocals makes it hard to sit through.  Things get really annoying on the next two songs though, where PARTYNEXTDOOR makes his guest appearances.

This was my first time hearing anything by PARTYNEXTDOOR, and my first impulse besides pressing the skip button (which I didn’t do initially for the sake of the review) was to pray for whoever is being blackmailed to give this guy a musical career.  Hearing these songs he’s featured on made me feel like Larry David in the Curb Your Enthusiasm episode where Susie’s daughter starts singing, and everyone around Larry is being polite and letting her torture their ears.  PND’s production is one thing, but his vocals sound like he’s mocking people with certain disabilities, which might have been funny if this was a musical piece on Family Guy.  Things kind of pick up again when Wundagurl steals the show with her production on “Used To”, and Lil Wayne and Drake rap about adapting to fame.  Drake steps his raps up a bit on these next few songs, as “6 Man” actually has a pretty cool interpretation of Erykah Badu’s chorus from The Roots’ “You Got Me” after some decent rap flows.

The last quarter of the album has Drake whining about his relationship issues again, and nothing really stands out here besides “You & The 6”, a song directed to Drake’s mother.  Things end on a strong note though, as the bonus track “6pm In New York” has Drake spitting raw raps similar to “5am In Toronto”.  This song shows that Drake can actually rap, which makes it so frustrating that the rest of the album isn’t up to par from a Hip-Hop standpoint.  When Drake raps it’s kind of cool, even though he can’t really compete with a lot of the other rappers making music today.  With most of these songs though, he combines his rapping with his monotonous melodies, and I find I’m liking certain parts of certain verses rather than actually liking any entire song here (with a few exceptions).

Overall, like with most Drake albums, there’s nothing really special here I’d see myself coming back to in the future.  All of Drake’s previous albums lost their replay value for me after a couple weeks, and this is no exception.  I applaud Drake for using mostly Canadian producers on this album, as Wondagurl, Boi-1da and 40 stole the show on songs like “Used To”, “Energy”, and “6 Man”.  Despite having some good production, Drake’s vocal game is a mess, and I think I’d like his music more if he clearly differentiated his singing from rapping, as opposed to doing a few bars of each within the same verse.  He also needs to find something meaningful to say in his songs, because the bragging doesn’t work without the lyrical talent and the whiny songs about women gets tiring.