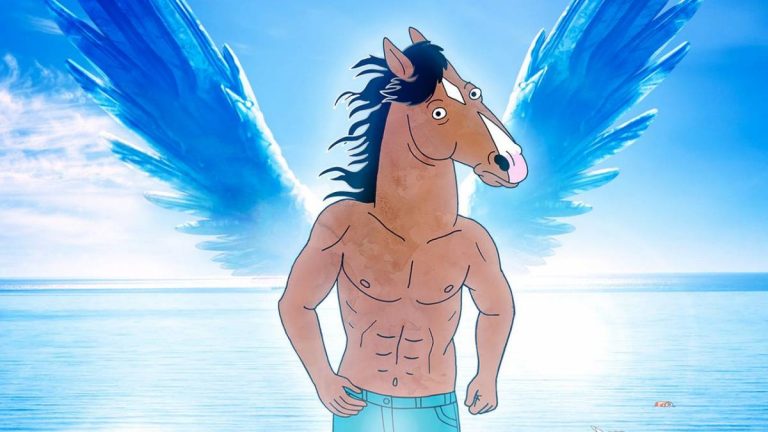 Bojack Horseman is another one of Netflix’s fine forays into the world of original content. This also means, thanks to their releasing of a whole season at once via streaming, it is a perfect way to lose days on end.

Bojack Horseman takes place in an anthropomorphic world, where people of all species coexist in the same society. Enter into this the titular star, Bojack (voice by Will Arnett), a beyond his glories day star of the much loved 90’s sitcom Horsin’ Around.

In the first season we are treated to Bojack’s disillusionment with himself, the constant search to be happy. Think Hank Moody in Californication without as many redeeming qualities. Bojack is surrounded by people who make his world more surreal, his agent, a ‘man’ that may actually be three boys standing on top of each other in a trench coat, his stoner housemate and the ghostwriter hired to write a book about him.

The first season of Bojack Horseman danced around this tortured idea. A new show moving in various directions, struggling to find its voice. Despite how uncertain the first season was, fans praised the moments that they identified with, those moments of hitting rock bottom with no deus ex machina, coupled together with silly animal jokes and childish humor.

These stupid jokes are what make the series so funny, it boasts the same mix of clever absurdist and childish jokes as Arrested Development. It’s destined to become a cult classic in the same way, but instead of offering wave after wave of jokes, Bojack includes a lot of heart, so afterwards we are never sure whether the tears from crying from laughter or the sadness are separated.

The second series hits the stride that the promising first series aimed for. It is ambitious with the targets it shoots and the themes that it tackles, but it honestly lands almost every target it makes, and when it misses, it is only by a nose. The first season is still worth watching, but should be understood that it isn’t the best of the series, and is more of a stepping stone before getting into the entertainment sprint that is season 2.

Season 2 joins us after the publication of the ghostwritten memoir, One Trick Horseman, exposing Bojack as the troubled soul that he is. The only thing is, it raised his profile so much that he is more famous than ever before, and has landed his dream movie role.

On top of that, he enters into a relationship (with an owl voiced by the wonderful Lisa Kudrow) and everything seems to be looking up. The only thing is, Bojack Horseman is not happy. He self-medicates and numbs the pain with adventures, cigarettes, drugs – Bojack should get an award for wallowing in his own pity next to the Golden Globe on his mantelpiece. 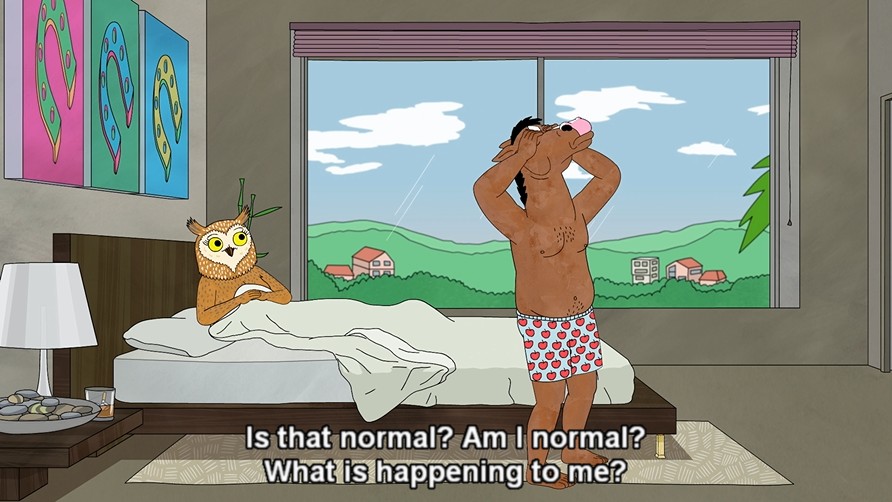 Series 2 deals with this by introducing us to themes, such ones that mirror the reality of the world that we know, that it’s difficult to wonder if any creative liberties were taken at all. In the fictional “Hollywoo”, we see issues of sexual harassment in the entertainment industry, satire of the lack of originality and rise of reality TV and the shocking scenes that appear behind the backstage. Bojack weaves through this world, seeing everything with a shocked eye but unable to do anything about it for fear of losing all the instant gratification this fake reality gives him. He is ultimately a victim of this society, but one whom has also profited from it immensely.

Bojack is ultimately lonely in a digital age full of connections, struggling to identify what he cares about and trying to find people who care about him. He pushes those who try to help him away in an attempt to protect them, ultimately becoming an animated version of the Kerouac quote: “Some people are so poor, all they have is money”.