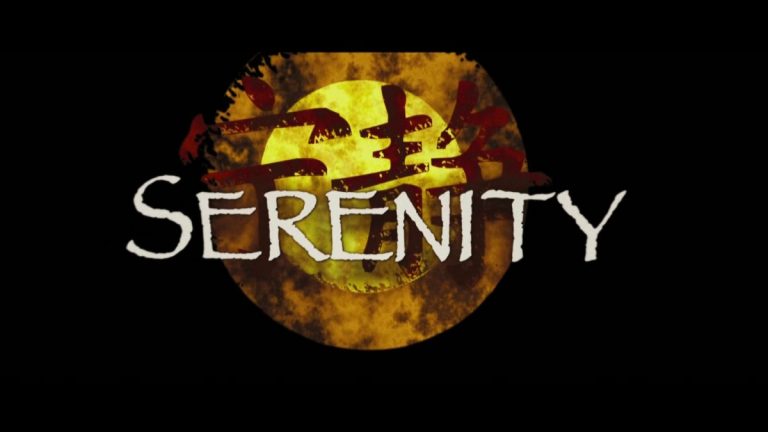 In some ways, Serenity is a film that had no right to exist in the first place. It was a major motion picture based on a cancelled TV series, directed by a man who had never made a feature film before, comprising of a cast that was immensely talented but included no ‘big-name’ stars. The odds were against it from the start, and sure enough, the film barely turned a profit in cinemas before going on to find a second lease of life via DVD and a rabid fan base.

For those not in the know, Serenity was the big-screen spin-off of Firefly, a short-lived but much-loved TV series from writer/director Joss Whedon, nerd deity and creator of Buffy The Vampire Slayer. Whedon now wields massive clout in showbiz thanks to a formidable CV in television and most recently, teaming up with Marvel Studios to make a gazillion dollars with The Avengers. Back in 2005, however, he was known to many simply as That Guy Who Made Buffy.

I first watched Serenity not long after it came out. I hadn’t seen any of Firefly at the time and remember enjoying the film but realising I’d have been more invested in its world if I’d brushed up on the show first. Eight years later, I can now recite entire episodes of Firefly from memory (if you haven’t watched it yet, fire up Netflix and prepare to fall in love) and Serenity is a film I clutch close to my geeky bosom.

There’s a lot to love about the film, whether you’re versed in Firefly or not, and it speaks volumes about the movie that its charms and details do not exhaust themselves after repeat viewings. On the one hand, Serenity is a gleeful romp that mixes sci-fi with Westerns, comedy, drama and even a smattering of horror. It’s also a love letter to feature films that put character and story first, where the protagonist must undergo a journey with a clearly defined beginning, middle and end. Many have written about Joss Whedon’s immense knack for dialogue but as far as I’m concerned, one of his greatest talents is in making sure all the beats of a story feel just right. Some of Serenity’s more intimate moments may feel out-of-place to anyone who doesn’t know the characters but in terms of narrative structure, the film is positively watertight.

Whedon decided to keep it simple with the film’s story, in which a plucky band of outlaws must stay one step ahead of the baddies while uncovering a dark secret that has implications for the entire universe. Heading up said band is Captain Malcolm Reynolds, played by Whedon mainstay Nathan Fillion. Fillion’s easy charm, rugged good looks and decent acting chops leave me scratching my head as to how he doesn’t enjoy the same status as any number of better-known actors, but the world can be a strange and unfair-seeming place sometimes, and he is able to carry the entire movie on his shoulders effortlessly.

Although it’s an ensemble piece, Serenity largely belongs to two other actors besides Fillion, one of which is Chiwetel Ejiofor. Like Whedon, Ejiofor has gone onto fortune and glory in the years since 2005, but Serenity was one of his first major gigs. He plays The Operative, a fanatical Government hitman tasked with chasing after the good guys and making life as hard as possible for them along the way. Ejiofor plays the role of an amoral believer with an almost academic sense of patience, and the end result is one of the more memorable screen villains in science fiction.

Another actor who deserves a big bowl of props is Summer Glau as River Tam, an escaped guinea pig of some nefarious federal plot to concoct the ultimate living weapon. River’s character arc in the TV show was a complex affair and Glau has the difficult task of condensing that same arc into a two hour film, but she pulls it off. Glau plays an archetype that has been the cause of much whittling-down over the years, a “strong female character” (which is 2014 is shorthand for anyone with ovaries who is good at hitting people). What Whedon knows – and what Glau embodies with her performance – is that a strong female character can be just as vulnerable as complex as her male counterpart, or to put it another way, an actual person. No amount of in-depth character exploration, however, should get in the way of a good fight scene, and Glau is able to put her real-life training as a ballerina to good use in one of the best scenes in the entire film;

Serenity isn’t perfect by any means. One of the most fascinating characters in the TV show, a beguiling courtesan named Inara (played by Homeland‘s Morena Baccarin ) is given only a handful of lines in the film so her role in the movie feels perfunctory at best. At times, the viewer can sense Whedon’s frustration as he attempts to crobar an entire TV show’s worth of character and backstory into a single movie. On the plus side, the film still looks great, with a great level of visual detail and an emphasis on practical effects that ensure it has a sturdy weight to it, instead of looking like a video game cutscene.

Joss Whedon now has a total of three movies under his belt – the aforementioned Avengers and a splendid adaptation of Shakespeare’s Much Ado About Nothing – with a fourth on the way next summer with the much anticipated Avengers: Age Of Ultron. I still feel like, despite his incredible body of work, his best stuff on the big screen is yet to come but until then, Serenity makes for a marvelous calling card.