Ranking The Toy Story Movies From Worst To Best 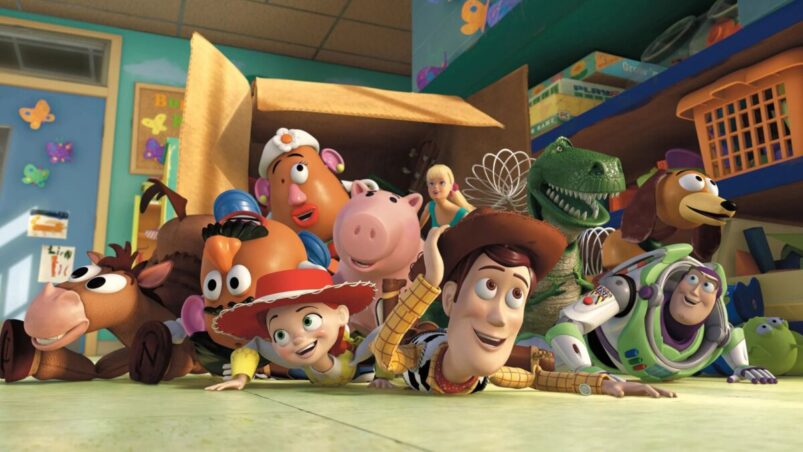 The release of Lightyear isn’t the first time Disney has tried to expand the Toy Story universe. A film that effectively functions as the movie the characters of these movies would watch in their own world, the movie is not going to be in our Toy Story ranking. Lightyear is Disney’s second story setting Buzz Lightyear as a functional human being in his own cinematic galaxy. It’s the sort of story Andy or any other character in the mainline Toy Story films might watch in theaters.

However, Lightyear ultimately doesn’t feel much like the series children and adults have been enjoying for nearly 30 years. Beginning in 1995 with the powerhouse success and game-changing impact of Toy Story, Pixar’s flagship franchise has been visually revolutionary, but with clever stories and fascinating characters at its foundation. Toy Story ranked in any form reveals a collection of movies that remain consistently excellent. The first three Toy Story films in particular show us a series that consistently stood apart from the rest. The fourth film, as well as Lightyear, do not feel too terribly unique from most other movies being made these days.

Toy Story as a franchise, though, remains as culturally relevant as ever. Even as these four movies cover three distinct decades of entertainment history, the best qualities of these films shine through with the best animation technology available at the time. Let’s cover the ups and downs of this quadrilogy in greater detail as we get into this.

Ranking Toy Story 4 at the bottom of any list seems strange. After all, the movie is almost impossible to dislike. Reviews were almost universally positive, with many calling the film a charming epilogue to the best animated film trilogy of all time. That’s true, given that Toy Story 4 had to follow up the previous entry’s extraordinary task of ending a 15-year adventure on a perfect note. What else was there to say, although another movie nonetheless seemed inevitable. Toy Story 4 could have just been a product of setting for that likelihood.

But Toy Story 4, which sets Woody (Tom Hanks) off to find Bo Peep, doesn’t feel very connected from one thread to the next, with quite a few characters and stories that run together. This includes Woody trying to find Bo Peep, Buzz (Tim Allen) trying to find Woody, and the existential crisis of a new character Forky (Tony Hale). Forky on his own is hilarious, with Tony Hale turning in a performance of sweet wonder and utter terror at literally everything. Toy Story 4 suffers only from being overbaked, with all these funny, insightful, and somber moments never fully gelling into what’s supposed to be a single movie.

The fact that Toy Story 4 has to fit so much into its absolutely stunning (the first widescreen entry in the series) frame doesn’t ruin the fun though. The film’s best moments carry it easily, with Woody finally finding his own place in the world. The relatively dramatic changes to Bo Peep, once again played to perfection by Annie Potts, are exciting and bold changes to the character. New toys played by Keanu Reeves, Keegan-Michael Key, and Jordan Peele are all fun in their own way.

Toy Story 4 just doesn’t quite reach the first three films because it’s both an epilogue and a transition to new characters and stories. That’s a lot for one movie to shoulder, and it’s worth remembering that it’s remarkable how much it gets right.

From the moment trailers first began to run, the excitement around Toy Story was immense and arguably something special. It had a good premise, focusing on the secret life of a child’s toys, and how the old favorite Woody the cowboy handles the arrival of new favorite Buzz Lightyear, a space toy. It featured an astonishingly well-liked and talented cast, including Tom Hanks, Tim Allen, Annie Potts, Don Rickles, Jim Varney, and several others.

It’s not a wonder that all of the above, including a legendary Randy Newman soundtrack, and a deeper story beneath Woody’s desperate bid for attention and the security of a defined role and place in life, made Toy Story a massive hit. Critics loved the performances, comedy, visuals, and perhaps just as enthusiastically the potential Toy Story’s success suggested. Something new in the world of animation was now here to transition the medium to a different era. Traditional animation regrettably suffered, but the decline was still a little way off. Toy Story must be discussed as a cultural achievement, not just in terms of its success at its time of release, but also how it’s still a very pivotal piece of an enduring series.

How does the movie itself hold up? Better than you might think if you haven’t seen it in a while. Allen and Hanks are both hilarious on their own, strongly realized as compelling characters, and form one of the most satisfying friendships in movie history. All of that comes across, even if the animation is naturally a little rougher when compared to the next three entries. That probably won’t stop you from getting into everything we love about Toy Story. Toys played by the likes of Wallace Shawn, Laurie Metcalf, and Pixar favorite John Ratzenberger are distinctive characters we instantly connect to. There’s also the fact that the film provided audiences in 1995 with an extraordinary opportunity to see the full scale of what computer animation could do on the big screen. It could now definitively tell a stunning cinematic story with deep, emotional characters, engaging designs for those characters, and elaborate backgrounds.

Toy Story has a flawless pacing of character, humor, relatable themes, and boundless enthusiasm to show off new technology. It’s comparatively simplistic at times, but that’s not a bad thing in this case.

If this ranking was judged on emotional weight of specific scenes, Toy Story 3 would be the clear winner. That doesn’t mean it fails as a cohesive story, or that it doesn’t build to those specific scenes, which force Buzz, Woody, and most of the original gang (oof) to contend with the very real possibility of complete oblivion, in a meaningful way.

It’s just that while Toy Story 3 is one of the best third chapters of a film series ever made, this leap into telling a bigger story in a suitably bigger world doesn’t always work. Forcing them out of Andy’s bedroom for good proves to be a moving, utterly beautiful, and necessary story to tell. It’s almost impossible for a movie to carry such a profound storytelling ambition without a few small bumps that can feel like some of the inherent appeal of this series is now an afterthought. These minor criticisms are only mentioned because when it comes to the best of this series, it’s extremely difficult to choose between this conclusion to a trilogy of stories involving the toys owned by a boy named Andy, and the film that ultimately got the top spot.

Toy Story 3 provides added depth to characters like Woody and Buzz. A lot of that comes from Tom Hanks and Tim Allen giving voice performances that match the very different approach to plot and pace that this movie was going to have. Praise should also go to the late Ned Beatty as a toy who runs the show at the daycare center where much of the film takes place. An actor who could shift from sweet to genuinely frightening with the ease of a singular talent, Beatty also gives this movie a depth that makes Toy Story 3 the most emotionally complex of the four. As gorgeously animated as these increasingly elaborate worlds are, the writing and acting are really just as instrumental to the success of Toy Story 3 and the others.

All these reasons show us that Toy Story at its best really is entertainment for just about every conceivable family member. Toy Story’s appeal and themes are as close to universal as anything gets these days.

Toy Story 2 tops this ranking for telling the best Buzz and Woody story put to screen thus far. These characters and their relationship are the heart and soul of this universe at its absolute best. That’s not as deep as some of the subjects and themes explored in later films. Many of them are nicely touched on in Toy Story 2’s story of Buzz launching a daring search and rescue mission for Woody, taken by a man who plans to sell him to a vintage toy collector in Japan. Toy Story 2 stays lighter by comparison, but this works for a series that’s at its most charming when Woody and Buzz are either working together, or are each building on their characters in ways that are both humorous and meaningful.

Toy Story 2 also benefits from having two distinct, but equally pitiable antagonists. One is the man who thinks he’s scored an incredible find at a yard sale organized by Andy’s mom. Voiced to the perfect and hilariously unlikable tone by Wayne Knight, he’s less sympathetic than Stinky Pete. One of Kelsey Grammer’s better performances, Pete is part of the same potential sale to a collector in Japan. Pete doesn’t have Woody’s home, and as such has a genuine motivation to make sure Woody is on board.

You also can’t talk about Toy Story 2 without talking about Jessie. Joan Cusack’s voice acting is met seamlessly with Pixar’s desire to give the sequel a new, nuanced female character. The result is one of the film’s secret weapons for both comedy and poignancy. All this attention to dividing the time evenly between old and new characters, before bringing everyone together in a way that suggests a new family has been defined, is the greatest strength of the best Toy Story movie. The film keeps its characters and plot threads (Buzz’s search for Woody leads to some of the best moments comedically of any of these movies) consistently matched, raising the stakes and depth in a world that still makes sense for everyone involved.

The ending is beautiful and well-earned, giving every character both closure and the possibility of another story. If there had never been another Toy Story movie, and it’s a good thing there has been, this would have been a lovely, optimistic farewell.

READ NEXT: Ranking The Dynasty Warriors Games From Worst to Best