Unless you have more than a passing interest in the UK’s alternative music scene, you may not have heard of Jamie Lenman. Until recently he was best-known as the guitarist and singer for Reuben, who developed a (relatively) small but incredibly devoted following. Many a heart was broken when they announced an indefinite hiatus in 2008, and it seemed Jamie might never return to music, deciding to focus instead on his illustration work (and you should check that out too, it’s cracking).

Or so we thought. In December, with remarkably little fanfare, Jamie dropped Muscle Memory on us: a double album with one disc of blistering metal noisiness, and one of…well, just about everything else. To call it ambitious would be an understatement, but the result is a diverse and eloquent collection of songs that fully showcase Lenman’s talents as a songwriter.

We pestered Jamie for weeks until he finally cracked and agreed to answer some questions for us. 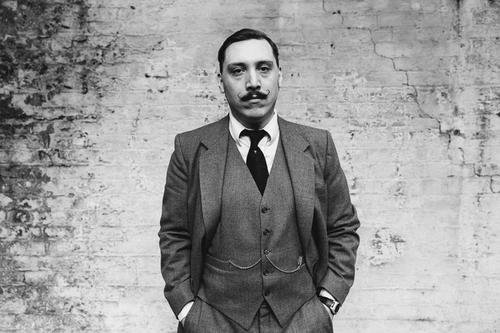 Very well thanks, visiting some old chums in Bristol at the moment.

2. WHAT INSPIRED YOU WHILE YOU WERE WRITING MUSCLE MEMORY?

Well in terms of the music it was bands like Converge, Tantrum, and Nostromo for the heavy stuff – for the lighter side it was Gemma Hayes, Steve Martin (yes that one) and C W Stoneking. Theme-wise I was thinking a lot about my family, where I’d got to in my life and occasionally broader subjects like utter despair at the gap between the public and the ruling classes in Britain, and the perceived failure of the noughties as a decade to have produced anything close to a cultural identity. Heady stuff!

3. YOU’VE GOT A BUSY SUMMER LINED UP. WHICH FESTIVAL ARE YOU MOST EXCITED TO BE PLAYING THIS YEAR?

That would be unfair to reveal. The truth is that they’ve all got some kind of draw for me, perhaps one has a lot of other bands I like on the line-up, a couple are run by people I know and like, one’s got a particularly good falafel stall, etc.

4. WILL THE DAPPER/TERRIFYING SAX GIMP FROM THE NEW VIDEO BE MAKING AN APPEARANCE AT YOUR APRIL SHOWS?

He will in that it was me in the mask, but to answer your question more accurately there will be a gentleman playing saxophone with us, but no mask sadly.

5. WHAT DOES THE FUTURE HOLD FOR YOU AND THE HEAVY MELLOW BAND?

Well the April shows are the next thing, and then all those festivals after that. If you mean another album and whatnot, I can’t say. There are no plans. The Heavy Mellow band will go into hiding, ready to leap to England’s defence in its hour of direst need.

6. WE APPRECIATE AN ECLECTIC MUSIC COLLECTION HERE AT CULTURED VULTURES. WHAT 5 RECORDS WOULD YOU RECOMMEND TO EVERYONE IF YOU HAD THE CHANCE?

I actually wrote this down on my album inlay, but a condensed version:

‘Night On my Side’ by Gemma Hayes

Especially that last one – DO IT NOW!

7. FINALLY, WHO WOULD WIN IN A BARE KNUCKLE BOXING MATCH BETWEEN FIREMAN SAM AND POSTMAN PAT?