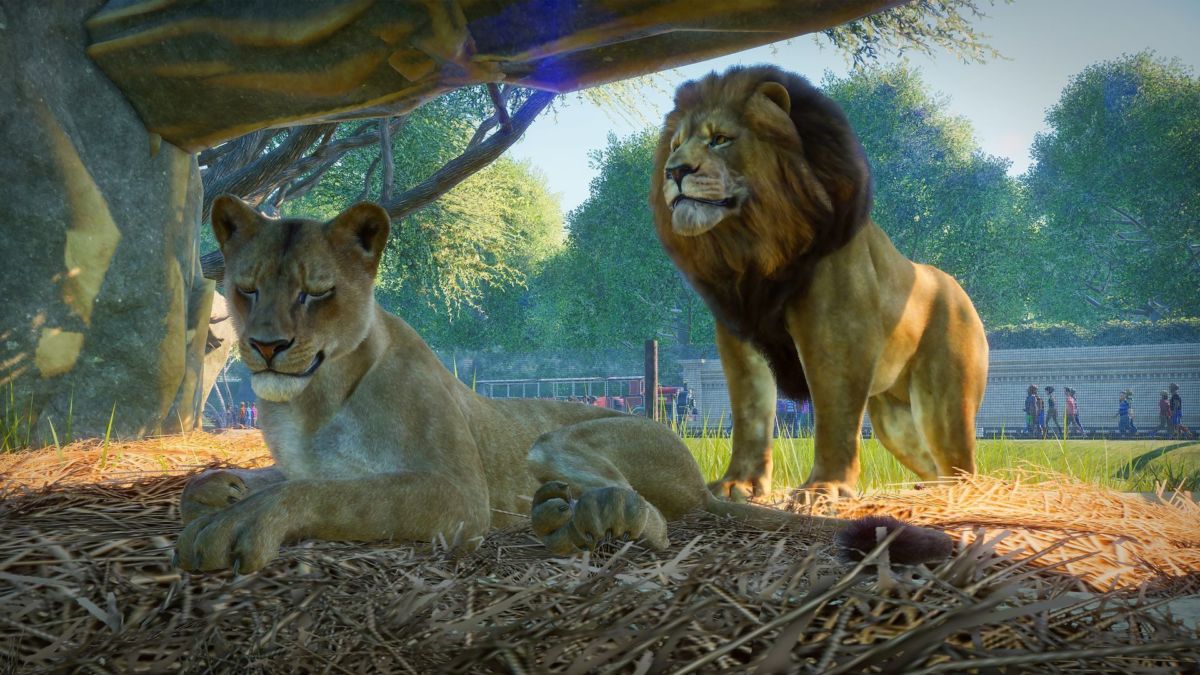 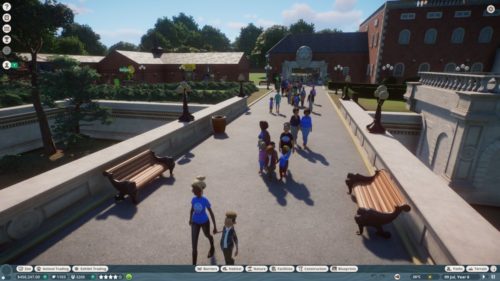 Back in 2016, Frontier Developments released a spiritual sequel to Rollercoaster Tycoon 3. That game was Planet Coaster, which I reviewed for this very site. Since then, a dozen or so DLC packs have been released for the game, but while all these little pieces of DLC were being released, Frontier would be working on a spin-off for the series. Enter Planet Zoo.

For those totally new to the genre, tycoon games see you building a business and making money. Planet Zoo, as you can imagine, will task you with running, or building, a zoo, and then growing and maintaining it. Each level tasks you with achieving objectives to gain a bronze, silver or gold star. Once you have all three, you can progress to the next episode. 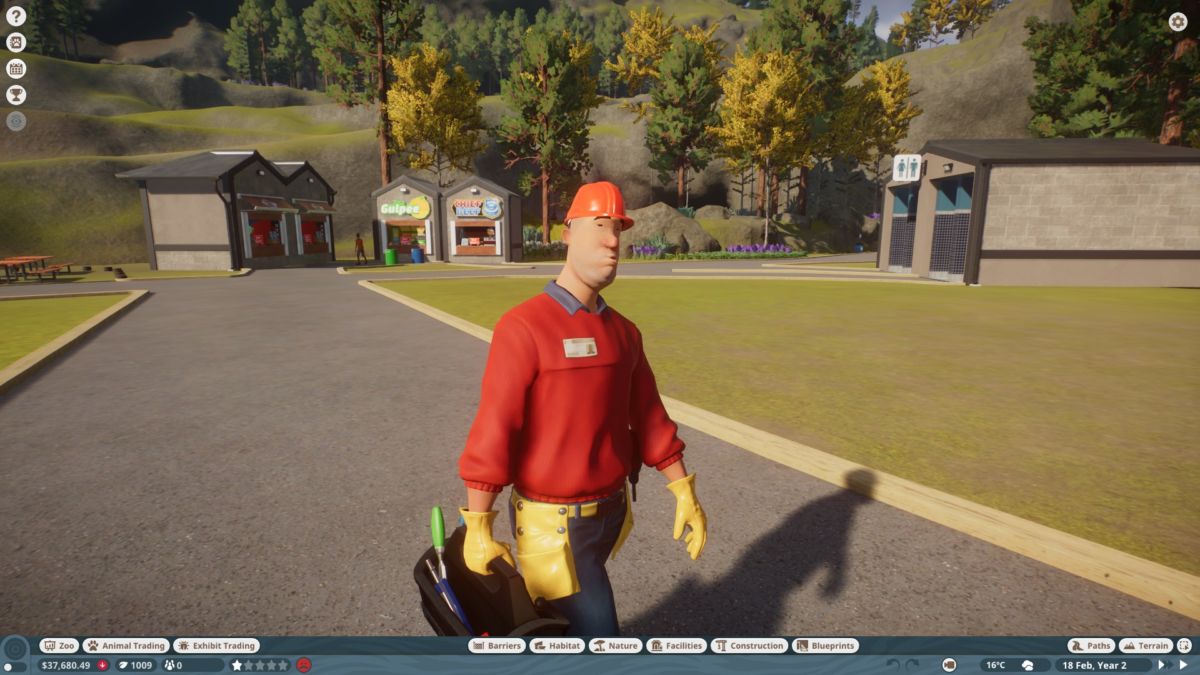 Planet Zoo shares Planet Coaster’s engine, meaning that if you’ve played Coaster, then the Zoo’s UI should be familiar to you. Paths can be placed down to guide guests around the Zoo and lead them to enclosures or shops etc. Path-making was one of the weakest elements of Planet Coaster, and sadly this is also the case in Zoo. They’re often unwieldy to place down: they’re good for creating large sections of pathway, but those wanting to make symmetrical or very specific paths may struggle.

Enclosures are built differently to any other structure in either Zoo or Coaster. Similar to building paths, you place your initial fence post, then place a second to form a piece of fence. After placing a starting point and you’ll see holographic-like representation of you next piece of fence, which will glow blue, or red if you’re attempting to place it in an unbuildable area. A gate also must be added to allow staff to enter. 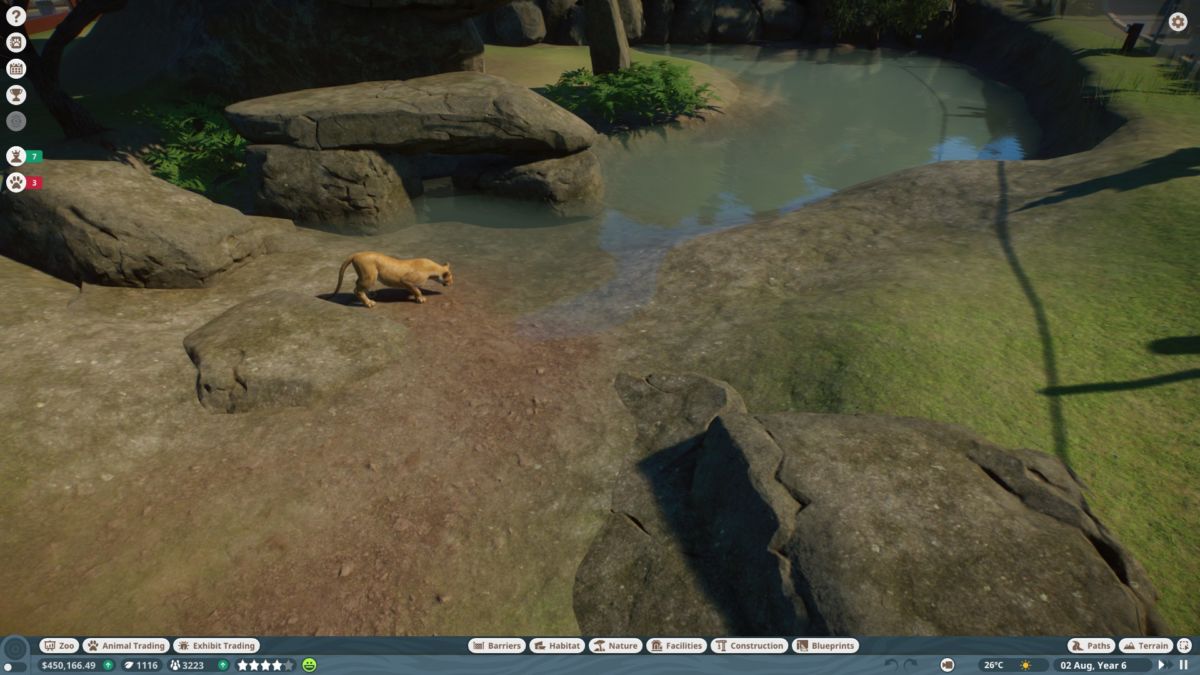 Buildings are constructed exactly as they are in Coaster, with Planet Zoo using a free-form version of creation that allows players to place objects and paths however they please. Buildings are constructed in a grid based system, and pieces can be added to form walls, columns, floors and decoration, which all snap to this grid. Also, with graphic improvements and a better choice of items, buildings look a lot better and more realistic then they did in Coaster.

Gameplay wise, Planet Zoo doesn’t do anything particularly different from its competitors. Zoo Tycoon and similar titles all gauge an animal’s happiness on getting their environment right, which is the same in Planet Zoo. For instance, a snow leopard isn’t happy in a desert biome, nor would a tortoise be happy in a tundra biome. Some animals may need sand, and a little grass, whereas some may need rocks and lots of foliage. 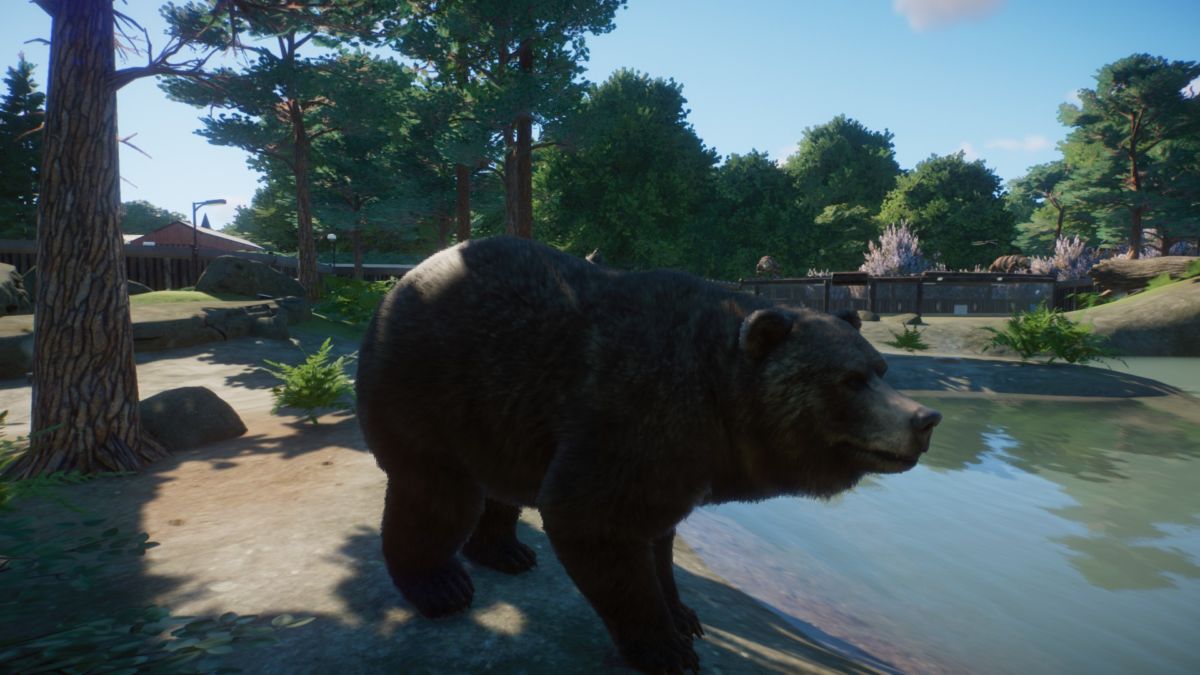 There’s a few different elements that Planet Zoo adds. You can control the temperature of an enclosure, as well as add enrichment items and toys to keep your animals happy. Paths can hold the usual stuff: benches, bins, lights, as well as picnic areas and donation boxes. Animals are adopted via the animal adoption screen and go into storage awaiting their move to an enclosure. They can’t stay stored forever, so have that enclosure ready for their arrival.

Animals also behave in different ways, mirroring how they would act in the wild, for instance some animals may prefer to live in a pack, or others may be more solitary, all these factors affect an animal’s happiness. Planet Zoo also allows you to breed animals, however, animals all have a personalised genome, meaning that you can’t simply inbreed your animals to make a quick buck without the consequences of doing so. 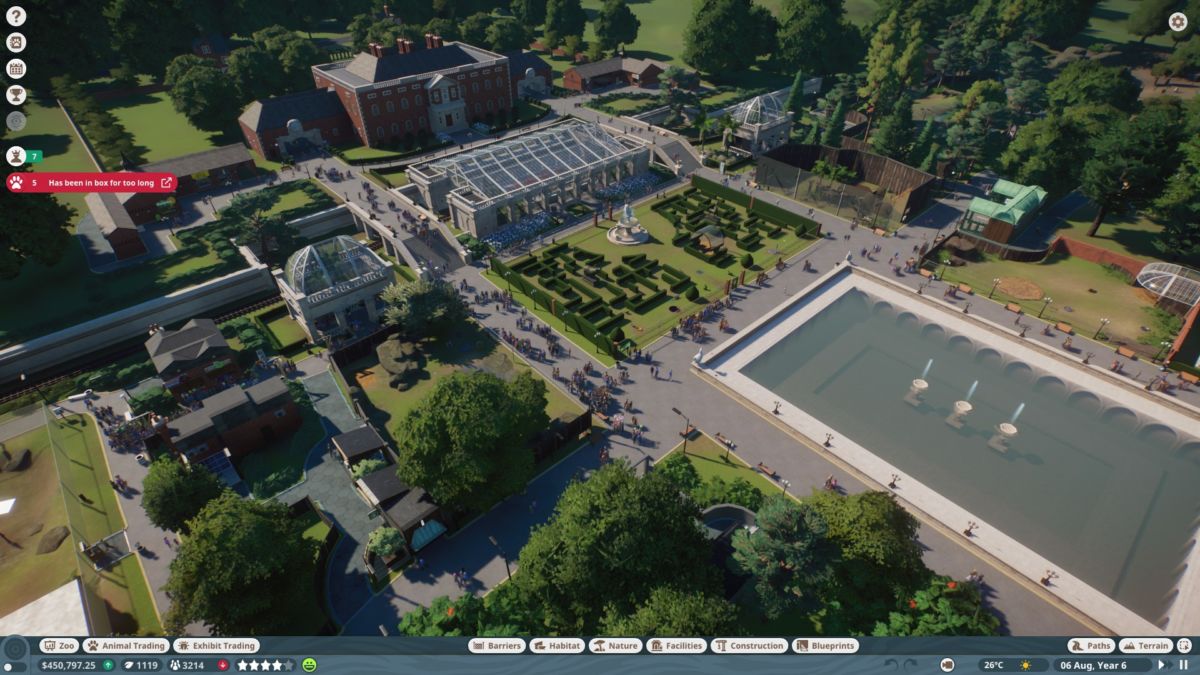 Planet Zoo has a career mode, which sees you managing a different zoo on each level, similar to most tycoon games. There’s also the obligatory sandbox mode, allowing you to build away to your heart’s content without cash flow worries. Then you have franchise mode, which falls somewhere in between. Giving you an empty plot of land to build on, you have to manage your zoo carefully if you want to expand it. It’s a simple mode, but the one I enjoyed the most.

Generally, the graphics looks a lot smoother and much more slick. Characters retain their cartoonish quality, but generally look a little more detailed than their predecessors. The environments appear more realistic than in Coaster, with real detail being added to trees, grass and general foliage. Buildings are much more real in Planet Zoo, and there are plenty more premade structures than in Coaster, too. 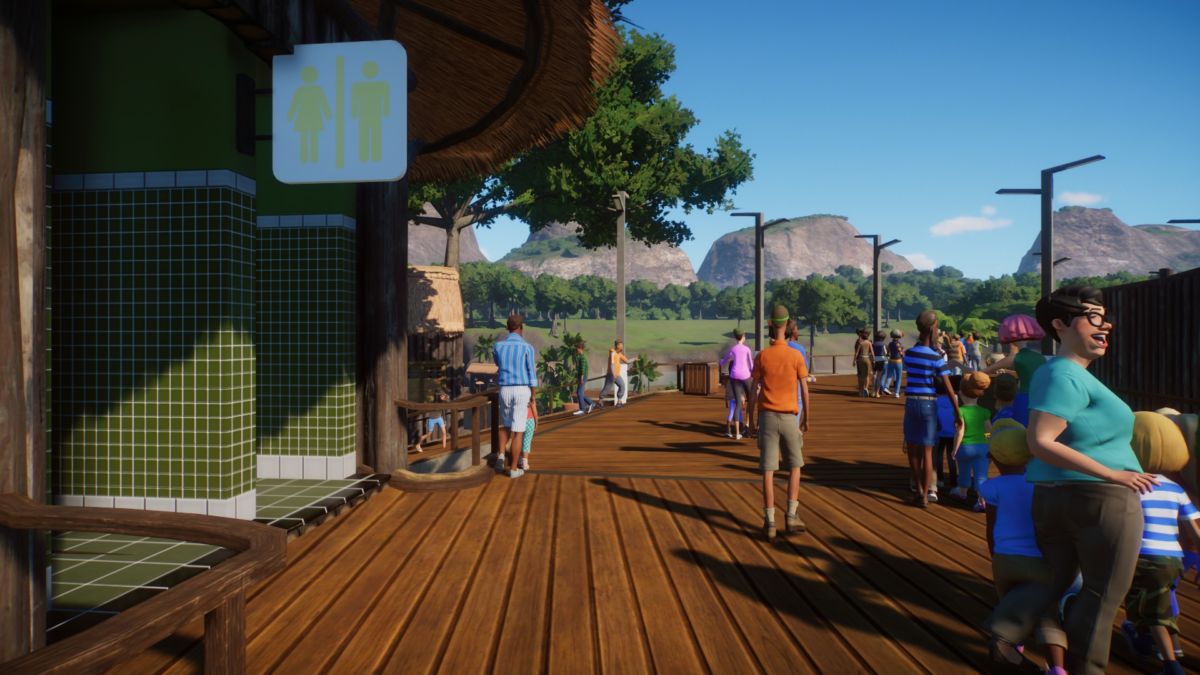 Best of all, the animals all look wonderful, and any one animal’s genome will mean that they may look a little different to another of the same species. Music wise, I don’t expect too much from tycoon games, but there’s some nice, relaxing tracks to build your zoo to, as well as accurate animal sounds and impressive voice over work.

While there’s little negative to say about Planet Zoo, there are a couple of quirks I noticed. There seems to be an issue with keepers not feeding animals as I was receiving warnings about ill animals due to a lack of food, though there didn’t initially appear to be any obvious problem. It felt like the keeper was doing his other tasks in the enclosure and just constantly forgetting to feed the animals. 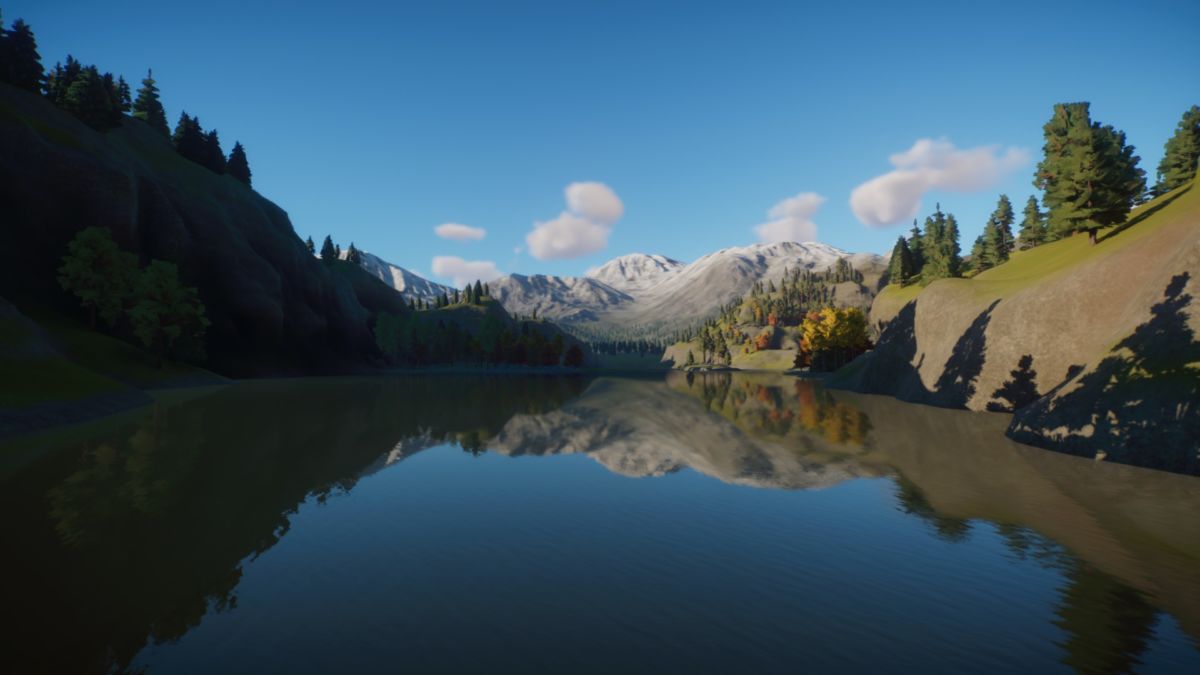 Also, I found the performance of Planet Zoo to be a little hit and miss. There were times where I’d turn the graphics down to minimum, and the game would stutter and chug along. Other times I was able to put the graphics right up to ‘ultra’ without any slow down at all. I’d just put this down to my computer, but it shouldn’t have an issue running on a GTX 1070 with an i7 processor and 16GB of RAM. I also noticed that quitting out and restarting the game would sometimes solve the hiccups, so I’m not sure what was causing this problem.

Apart from a couple of quirks, I’m really enjoying my time with Planet Zoo. There are a number of indie Zoo Tycoon-style games in development, and while I mean no disrespect to any of them, I really think of Planet Zoo as being in the AAA league of tycoon games, or at least as close to AAA as tycoon games get. It’s a detailed, fully 3D tycoon title that, despite a couple of niggles, is fantastic fun to play. Planet Zoo is the leader in a rather niche genre, but that shouldn’t discount its quality.